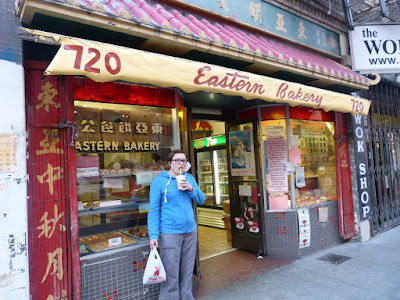 We arrived to blue skies at the Ferry Building in San Francisco after a mammoth 52 hour train ride from Chicago to the City by the Bay. Living at the foot of the Chilterns myself, I dismissed the infamous hills of SF and we elected to drag our cases along the Embarcadero and up Broadway to our motel. Half a hot and sweaty hour later we had triumphantly made it, and were ready to hit the town.

Broadway is positioned on the Edge of both North Beach and Chinatown, providing both good pizza and good dim sum. Perfect. It's also home to the famous City Lights Bookstore and the city's red light district, but they weren't going to fill our bellies. 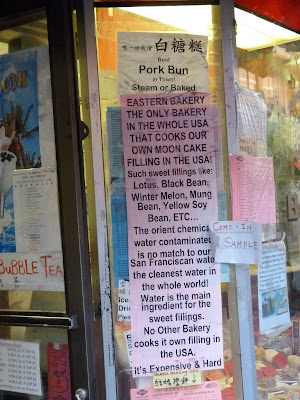 First stop was Grant Street, a main artery of this Chinese Quarter, home to the Chinatown Gate as well as numerous restaurants, discount stores, bars and the Eastern Bakery. Purportedly this is the oldest bakery in the United States, with their moon cakes being a speciality and the steamed or baked pork buns being 'the best in town'. There's a few battered tables and chairs at the back, but we grabbed a selection of pastries and buns, and a bubble tea for the Ewing, and nibbled our wares on the street outside. 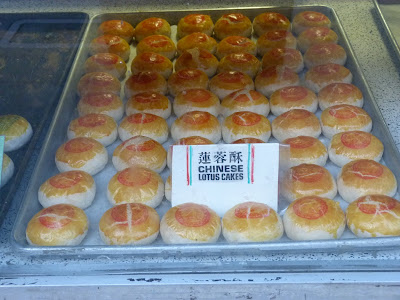 The lotus moon cakes were good, although I confess I don't really have a benchmark to compare them to. I did enjoy reading the spiel on the poster outside though: 'The Orient chemical water contaminated is no match to our San Franciscan water. The cleanest in the world! No other bakery cooks its own filling in the USA. It's expensive and hard'.

My favourite type of moon cake were filled with dense sticky coconut and pieces of dried fruit, and they also sold those wonderfully friable giant almond cookies that crumble into buttery crumbs at the slightest touch. Lovely, but less good when the Ewing took to eating them as a midnight snack, leaving an alarming number of crumbs stuck to me the next morning. 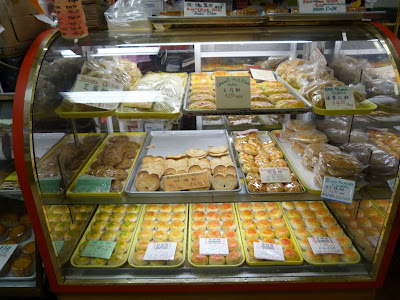 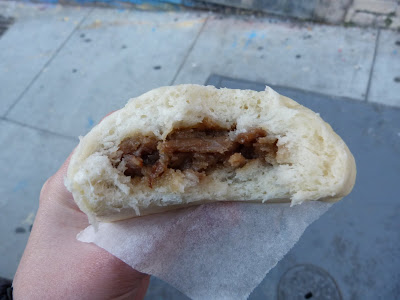 They had run out of baked pork buns by the time we arrived, but the Ewing, an avowed steamed bun fanatic, pronounced their effort 'pretty good'.  Although they may not have been the best, it didn't stop her eating two massive buns, along with drinking about a gallon of bubble tea.

It may come as a surprise to unfamiliar readers that we were still remotely hungry after our extended bun stop, but we were. Deciding we really should attempt to eat some thing vaguely green and healthy, we stalked around the streets a bit before finally using the tried and tested 'if the locals are eating there it must be good' method to chose a place for dinner.

As luck would have it that place happened to be the Man Kee Cafe, which was almost directly opposite our motel. Inside was utilitarian, bright lights, Formica tables and the NBA playoffs on the TV. Most reassuringly, everybody else eating there was Chinese. 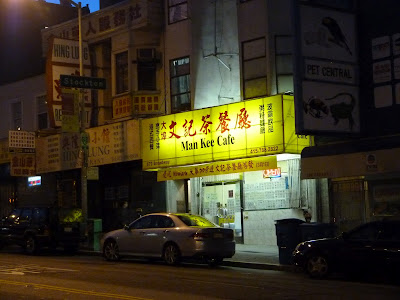 The menu came helpfully with pictures of most of the dishes, and as well as pages of a la carte options there was also a section of dishes offered at three for 19 bucks. Bargain. Feeling a little too digestively ginger to experiment too much I sadly avoided the frog's legs with bitter melon, and the stewed pig's intestines for the more familiar Szechuan green beans with pork and Chinese broccoli with oyster sauce.

For our third choice the Ewing let me decide, and I was quick to chose the honey and walnut shrimp; like the lox and bagels I had read about in a book as a child this dish was something I had heard about, but had never seen with my own eyes. Giant prawns fried and served with crispy honey walnut pieces. Then covered in mayonnaise. (I kept the whole mayo thing quiet at that point, wary the the Ewing was mindful of my previous dining disasters, and not wanting to scare the horses.)

It seems funny that one of the most innocuous sounding dishes, on a menu featuring all kinds of offal and off-cuts, potentially held the biggest surprise.... 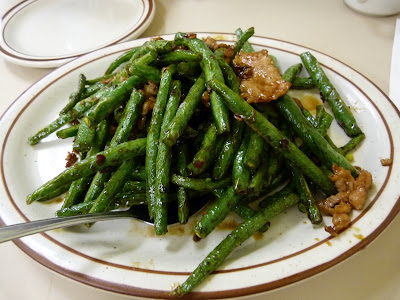 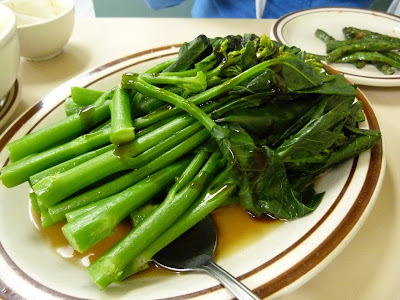 But before we had to navigate the perils of hot, nutty mayonnaise prawns we had to get through the soup course. You might not remember me mentioning ordering any soup, and that's for one very good reason, we didn't. Almost as soon as we had confidently pointed at the pictures of the food we actually wanted to eat a giant cauldron of soup appeared, unbidden, from the bowels of the kitchen.

Although no one else appeared to be eaten this soup we gamely ploughed through a few bowlfuls, without seeming to make any impact on the depth of the soup still in the cauldron. To be fair, it didn't taste too bad. Rather like a mixture between Heinz tomato and oxtail, with a few lumps of potato and carrot bobbing about and some mysterious, and alarming, 'meaty' chunks hidden in its depths.

Feeling we had done our duty another, equally vast and equally unordered, vat of rice appeared. By now both of us were rather green and sweaty and none of the food we had actually requested had turned up. Thankfully some greenery was next to appear. Some rather nice, charred and oily beans with crispy pork and a lick of numbing Szechwan pepper, and a forest of bitter cruciferous greens with a salty oyster gravy. 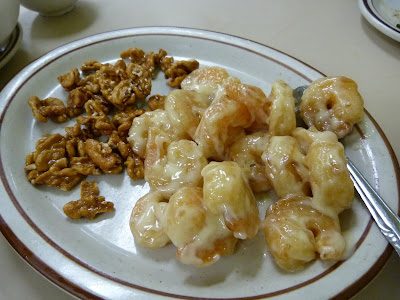 The fabled Honey walnut shrimp. These were, truly, some of the biggest and sweetest shrimp I have ever eaten. The mayonnaise coating, although slightly unnerving, was pleasant enough, and the nuts provided a sweet crunchy contrast, but we were eventually defeated by the richness of the whole dish. This was a bastardised American-Chinese experience right up with eating takeout from those iconic paper cartons on your hotel bed. So wrong, yet so right. 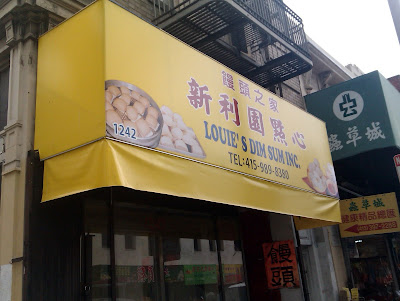 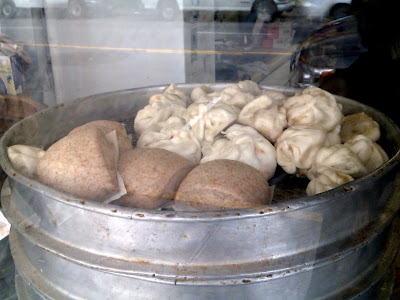 For our penultimate feast on American shores we decided to hit the streets for a dim sum that we could enjoy in the motel room while packing our suitcases.

Louie's Dim Sum had cropped up in the guide book as a good stop for some steamed buns, so we set off round the corner to Stockton Street.  While there we also decided to try a few cakes and pastries from the Wai Lee Bakery, as we had been looking at it from our motel window for the past week. 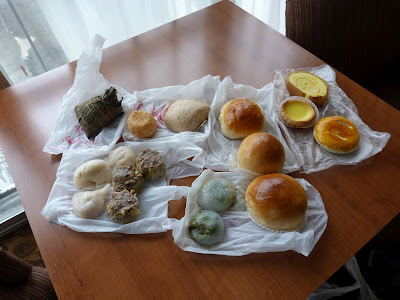 Our rather impressive haul of goodies, minus an almond cookie that had been accidentally consumed on the, very short, journey home. 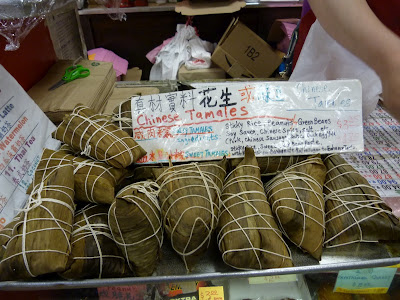 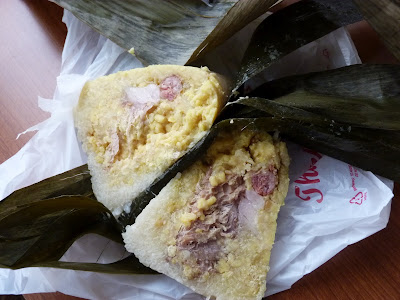 The Chinese tamale, or zongzi. There had been some confusion in ordering this,  I had just stepped outside to take a picture when the woman at the counter had started barking something unintelligible to the Ewing, to which she kept hopefully repeating 'yes?'. It turns out she had been asking peanut or green bean, the two different choices of filling available. Eventually she just picked up the first one to hand and stuffed it in a bag for us.

On breaking it open back at the motel the tamale turned out to be mostly filled with chunks of pork and some small nutty bits, that may have been peanuts but tasted more like sweetcorn. It was 'interesting', if not a little bland and stodgy sans any kind of dipping sauce. 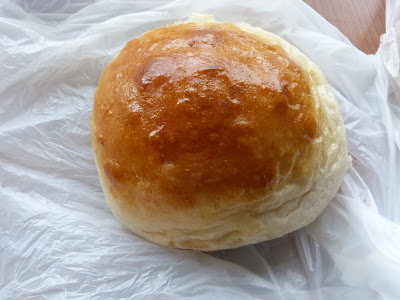 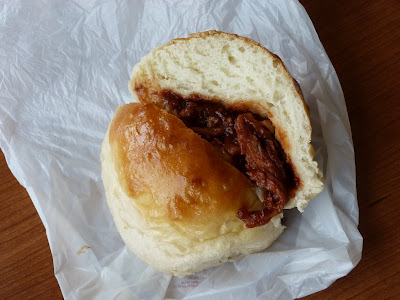 One of the finest baked pork buns I have ever eaten, this almost wasn't even purchased. After picking up our buns from Louis we were on the lookout for a bubble tea when I spotted these bronzed beauties sitting in the window of a You's Dim Sum, a couple of doors down from the motel. The Ewing was reluctant, reasoning (rightly) we already had far too much food, but I needed that bun. 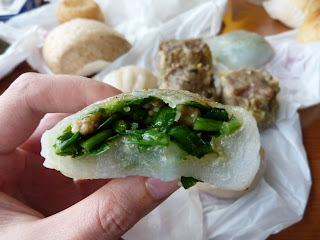 Turns out it was a good call. Louie's buns were fine, but this was a different beast. Fat, sweet and shiny, and stuffed full of succulent shreds of red braised pork. I also couldn't resist a couple of their dumplings stuffed with Chinese chives. Another winner; the springy, glutenous rice wrappers gently holding the salty, garlicky greens.

We also enjoyed a couple of the traditional favourites; juicy and deeply savoury har gau; and sweet siew mai, whose wrappers a touch thicker than I'd have liked, but understandable due to the takeaway nature of Louie's Dim Sum. (Nothing more distressing to find gossamer thin dumpling wrappers have stuck to everything and torn apart, spilling their cargo everywhere, when you finally get your booty home.) 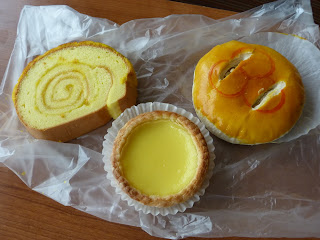 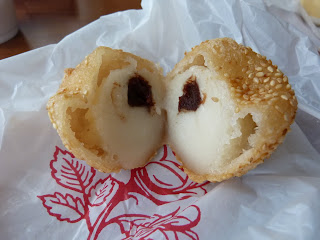 A good dim sum feast would be nothing without a egg custard tart to round things off.  The tart was very good; rich and creamy with gloriously short and flaky pastry. We also tried a piece of pineapple sponge cake, very light with a lovely, tangy filling; a dense and sticky moon cake; and a sweet, fried sesame ball.

Needless to say it was cast aside, probably a good thing as we were fit to burst at this point. The only real low point of an unusual, delicious, and bargainous dim sum brunch. 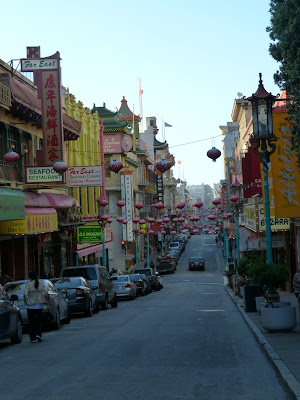 Like many inner city Chinatowns, crowding and costs are pushing people out into the suburbs, with places such as Richmond, Daly City, and across the Bay Bridge, now being the new spots to find the locals congregating, and the 'best' and most 'authentic' food.

But for all the developments and change it has seen, San Francisco Chinatown still holds a mystique and allure that is hard to replicate in strip malls and out of town shopping centres. From the fortune cookie factory to the Gateway Arch, the largest Chinese enclave in North America still has a unique sense of place and history. 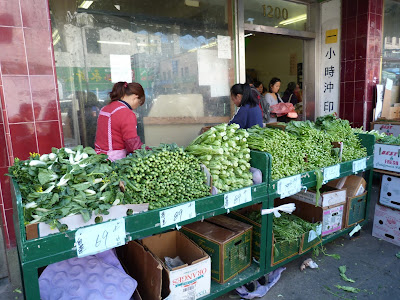 If you ever find yourself in the vicinity you can do far worse than an early morning stroll along the bustling market stalls of Stockton street, followed by a pork bun from the corner of Stockton and Broadway and moon cake and bubble tea from the Eastern bakery. And if your really brave there's always the honey walnut shrimp.... 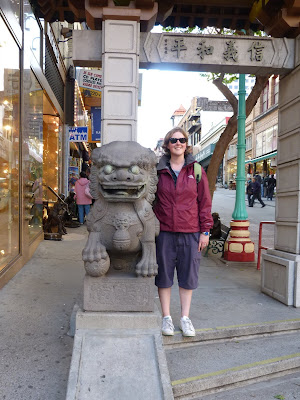