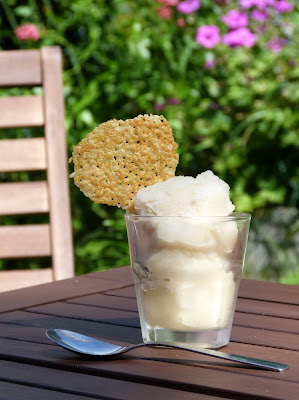 Apple and cheese; they may sound like unlikely bedfellows, but think of a nice crisp russet with a chunk of Lancashire, or Travis Bickle famously asking for his apple pie with a slice of Kraft on top (you may point out he was mentally unstable, but he still had great taste in snacks). The state of Wisconsin went one step further, passing a law making it illegal to serve an apple pie in a public restaurant without a hunk of cheddar alongside.

A recent trip down to Exeter for a friend's birthday got me thinking. What about an apple sorbet  served with  some sort of cheese biscuit. Flicking through some cookery books for inspiration, I stumbled upon a cider sorbetto in the new Icecreamist's book. Perfect. 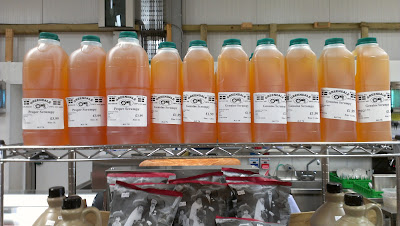 First stop en route home was Greendales Farm Shop and cafe. After four days of eating birthday cake, jumping on the bouncy castle and drinking Strongbow had left us in an even more fragile state than usual. A magnificent fry up,with some of the finest black pudding I have eaten, and copious mugs of tea bought us back to life. With supplies of local scrumpy and Hobbs House bread secured, we headed back up the M5 to Cheddar Gorge to pick up the next vital ingredient. 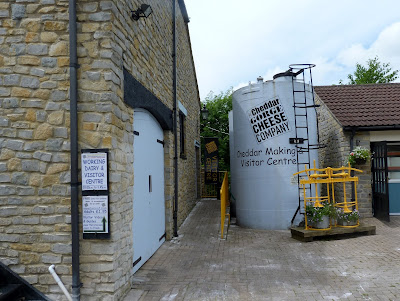 While everybody everybody else in Cheddar was climbing Jacob's Ladder up to the top of the Gorge, exploring the caves or overdosing on fudge and ice cream, we were straight down to the cheese factory. I still remember a childhood visit here with my family, well over twenty years ago, and was very excited to go back to see one of the finest cheeses in the world being made (and try lots of samples).

This is, sadly, the only Cheddar made in Cheddar. Cheddar started to be produced here as the caves around the gorge provided the ideal maturing environment and traditionally the cheese had to be made within 30 miles of Wells Cathedral. While other foodstuffs have secured protected designation of origin to safeguard their product, Cheddar has been bastardised from the Netherlands to New Zealand. ('West Country Farmhouse' Cheddar can only be produced in Dorset, Somerset, Devon or Cornwall, but 'Cheddar' can be made anywhere.)While some of it is made with great care and following traditional methods, much of it is mass-produced, pale and tasteless. 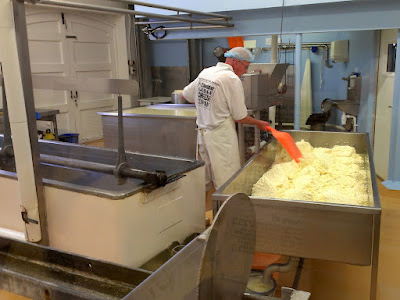 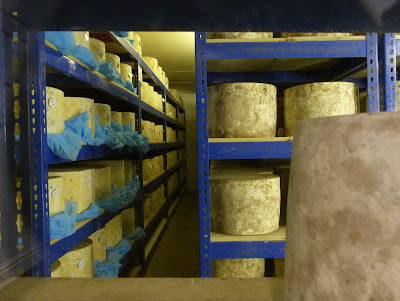 Here you can not only go and sample and purchase several different types of cheese (and various other chutneys, pickles and kitchenware) but for a couple of quid you can get access to the cheese making factory and see it being made for yourself.

To be honest most of the day you'll be staring at a vat of whey being stirred by a paddle, with the odd curd bobbing around if you're lucky, but if you come at the the right time (around one o'clock) you can see the curds being cut, or 'cheddared', and shaped ready for pressing. (Tickets allow readmission all day, if you're really that interested by it all.)

Cheddaring observed and samples sampled, I decided to get a trio of different flavours, a West Country cider and chives, oak smoked and the traditional cave aged. Smoked cheese provokes a lot of controversy, but I really liked this. Smoky without that overpowering burn at the back of the throat. The cave aged, after many years aged in Cheddar's own caves again, was lovely. Crumbly and smooth with real character from the local, unpasteurised milk. 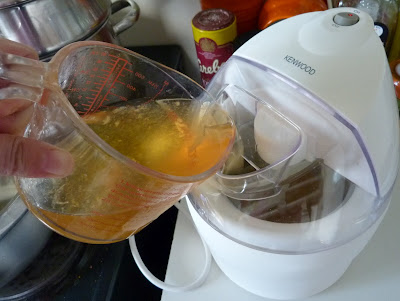 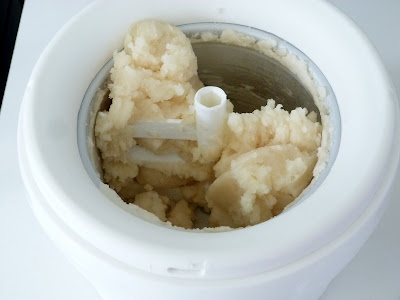 Both the sorbet and the wafers were a cinch. I doubled the sorbet ingredients, as the original recipe made a tiny amount, but halve it again if you like. The strong Scrumpy flavour really come through in the finished desert, so swap for a milder cider, or even a cloudy apple juice if you find the taste a little too overwhelming. Both the sugar and alcohol help keep the sorbet wonderfully smooth, but also means it needs to be eaten soon after coming out the freezer. Not too much of a problem in this household.

The Cheddar wafers are based on little Parmesan crisps. Using all Cheddar made them a little chewy, so I decided on a mixture of half Parmesan and half Cheddar. These really are the easiest things to make, and are perfect for nibbling with drinks, or garnishing risotto (add a a pinch of paprika or cayenne for a little spice). 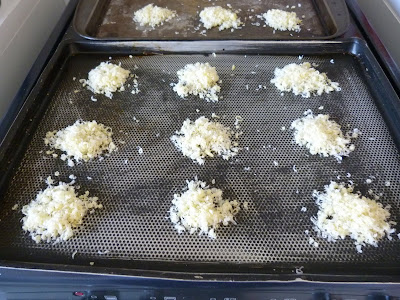 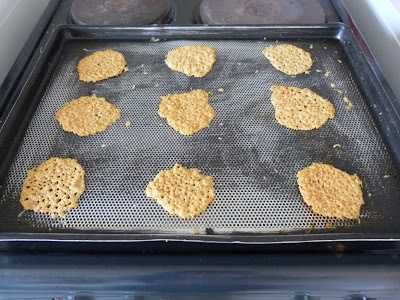 Place the water, clove and sugar into a heavy-bottomed saucepan. Bring mixture to the boil and simmer gently until sugar has dissolved and a thin syrup has formed (10-15 minutes).
Allow syrup to cool, remove the clove and place in a suitable container in the fridge for at least four hours or overnight.
Add chilled syrup to cold cider and churn in an ice cream maker according to the manufacturer's instructions.
Place sorbet in a plastic tub and place in the freezer to harden.

Preheat the oven to 500c.
Thoroughly mix the two cheeses together. Place desert spoonfuls of the mixture on a non stick baking tray and place in the oven for 5-6 minutes until golden brown (careful, they can burn very easily).
Place crisps on a wire rack to cool and harden.
Store any remaining wafers in an airtight container.