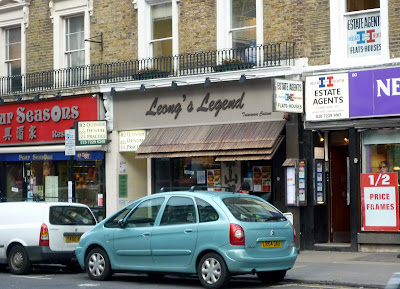 After a great trip to Hong Kong last year my keen interest in dim sum is now threatening to become a full blown obsession. ﻿Having heard pretty good things about the Taiwanese style dim sum and street food at the latest branch of this mini chain I was looking forward to trying out.
The interior is fitted out to resemble an oriental drinking den: booths separated by slatted partitions, dark wood and low lights. Although it's pretty dark it still manages to feel welcoming and spacious inside. The Ewing remarked she felt as though we in a scene from the Deer Hunter- thankfully without the game of Russian roulette. 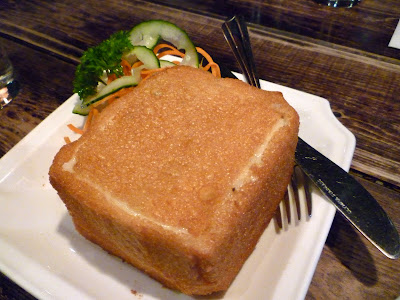 The dish I was most excited to try was the bizarre sounding casket.  Described on the menu as 'minced chicken and mixed vegetables in crispy box shape of toast' this is apparently a regional speciality in Taiwan and is also know as 'coffin bread'.  Sure enough a deep fried basket, complete with lid, quickly appeared at the table. 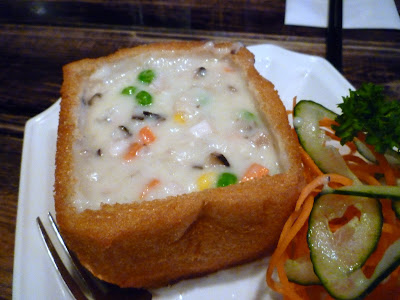 The inside resembled a kind of western style chicken pie, pieces of peas, carrots, chicken and mushroom were bound in a thick, bechamel style sauce.  Certainly strange and strangely satisfying this was quite unlike anything I'd eaten before. One word of warning, eaten piping hot it's rich, crispy and comforting but once it cools down the filling quickly becomes gloopy and the bread greasy, and I fear too many of these would see you meeting your maker alittle earlier than you may have hoped. 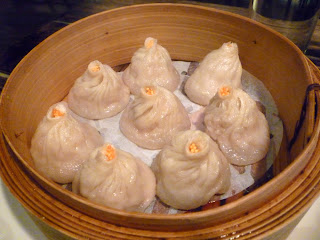 The restaurant is well known for one of my favourites, xiao long bao (soup dumplings), which come with a variety of fillings.  We picked the pork and crab and were pretty happy.  The wrappers were light, but thick enough to hold in the piping hot soup (with only one casualty sticking to the bottom of the steamer) and the filling was juicy. Although I would have preferred it to taste a bit more 'crabby' if i was being fussy. 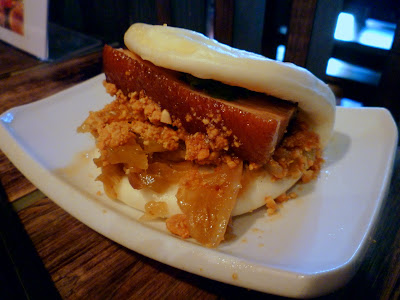 Another traditional snack on the menu was the mini kebab with pork, served in a white bun made from a springy dough very similar to that used in char siu bao.  I enjoyed this a lot, the fatty pork belly was complimented by crunchy peanuts and fresh green herbs.  The Ewing remained unconvinced by the addition of nuts, but that didn't seem to stop her polishing off her portion.  A spicier chili sauce would have cut through the fat and richness, but I'd still happily eat another. 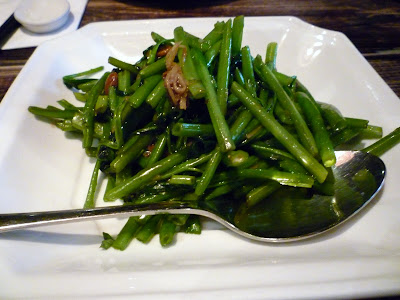 We also ordered  stir fried (what's the story) morning glory, which were bright and crunchy with a saltiness from added black beans and a lovely, iron-rich flavour. 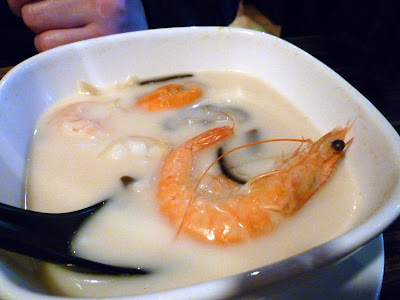 A coconutty seafood broth with with two huge prawns, scallops, mussels and squid.  (not really my thing and I didn't get the chance to taste this but the Ewing assured me was delicious, in between slurps.) 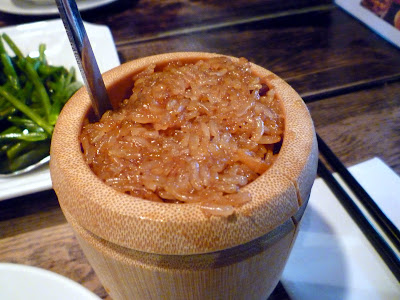 And finally some steamed rice in bamboo with shrimps, scallops and dried mushrooms.  The rice was good, sticky and full of nuggets of fishy, savoury loveliness. 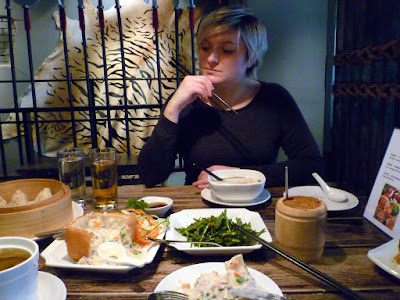 With two (slightly warm) Tsing Tao beers and service the bill came to a shade over £40.  Not bad value as we struggled to finish everything and ordered a decent variety of dishes. Service was good and the food came quickly.  If anything this was more of a problem as the overwhelming choice, coupled by the fact that most the dishes needed to be eaten hot to be at their best, made deciding what to eat next quite a challenge!

In an area with a variety of traditional Cantonese restaurants Leong's Legend makes a interesting change and is worth a visit to sample some unusual Taiwanese favourites.

A taste of June in January 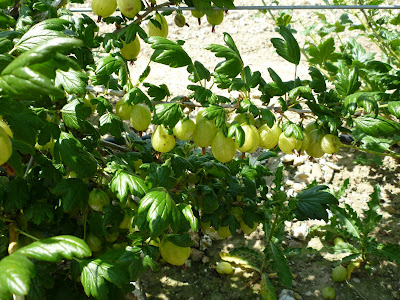 No sooner had I posted my last blog bemoaning the glut of gooseberries languishing in the freezer than the freezer decides to pack up.  Luckily the Ewing deduced the fridge light had blown, blowing the main fuse.  So while she rushed around unscrewing things and depositing our still uneaten Christmas turkey at her mum's house (another story...) it gave me a chance to defrost the glacier of ice behind the vegetable drawer, throw some of the unidentifiable nuggets of frozen stuff out and finally do something with the unloved goosegogs.

A much-maligned fruit, with is glorious green translucency, the gooseberry still remains one of my firm favourites.  As a child I remember the currant canes and gooseberries bushes at the end of the garden and the many happy afternoons spent picking the sweet sour berries and eating them until we got stomachaches.  With its very short season, sometimes lip puckering sourness and its fearsome thorns the gooseberry tries its hardest not to be loved.  But pureed and stirred into billowy clouds of cream to make a summery fool or in a warm, flaky-crusted pie with a dollop of cold ice cream, who could fail to be enchanted?

I started off with rather ambitious ideas about making a chutney to serve with oily fish, such as mackerel, or maybe roast pork.  But with the lowering clouds and rain against the kitchen window what better way to end a winter weekend than a gloriously hot, crunchy, rib-sticking bowl of crumble with custard. 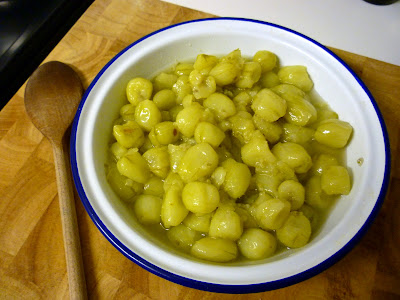 Place the gooseberries in a pan with a splash of water, sugar and the elderflower cordial (if using).  Place on a gentle heat and cook until the berries begin to soften and breakdown slightly.
(You don't have to cook the gooseberries before you bake the crumble, just place them straight in the dish and sprinkle with the sugar.  Although this is a slightly quicker method  I find the top can burn before the berries are soft.)

Rub the butter into the flour and sugar until the mixture resembles rough breadcrumbs.  I do this by hand but you can use a food processor. Try not to over work, crumble is best when it's rough and rubble like. Mix in some oats for extra crunch if you want. (Ground or flaked almonds are also a good addition to the crumble topping.)

Place berries into an ovenproof dish and cover with the crumble mixture.  Bake for 30 minutes at 180c until golden on top and bubbling. 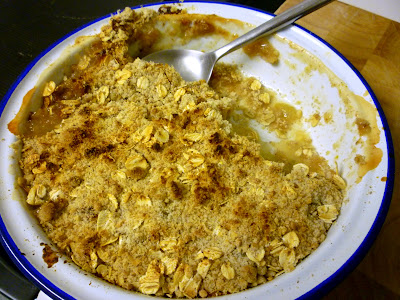 So, where else can you read the ramblings of someone with a interest in random 'things' and far too much time on their hands? Yep, that's right, it's all here in the new, improved and hopefully more regularly updated version of my blog.

With Christmas just a dim and distant memory, bills piling up on the doormat and slimline everything what better way to cheer up than a reminisce?  And I like lists.

After finally moving to house with a garden I was bitten by the green thumb.  Planting my tomato seeds far too early meant the Ewing had to put up with the kitchen and lounge being engulfed by leggy triffids but it was all worth it when they made it out into the garden and one finally ripened. (Never has the humble cheese sandwich tasted so good) Thankfully many more followed and the stubborn green tomatoes made a rather delicious chutney.

What better way to spend a glorious June morning than picking sweet English strawberries warmed by the sun.  The ones that actually made it back home were quickly dispatched with some cream or made into my first attempt at jam. (The gooseberries we picked were a different matter: after being scratched to ribbons by their thorns the poor goosegogs are languishing in the freezer waiting for inspiration to strike.  Recipes on a postcard to the usual address) 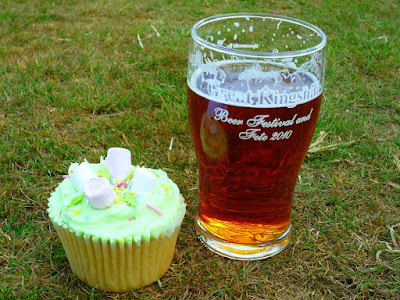 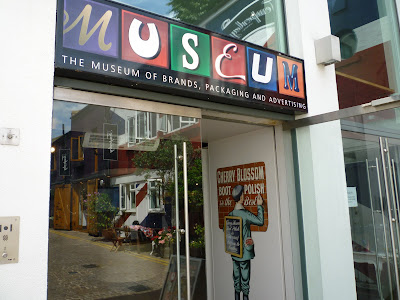 Tucked in a little mews away from the hoards of shoppers on the Portobello Road, and featuring over 12,000 original items from the Robert Opie Collection, this museum is a gem.  I was in my element looking at old Heinz bean tins, chocolate bar wrappers and 70's crisp packets.
And anywhere with a display devoted to Bovril, food of my Gods, has to make the top 10.


Everybody loves a good wedding. Not only did the day go swimmingly well, and bride and groom look resplendent, but I also got to spend a wonderful long weekend with my aunt, Uncle, Dad and cousins.  We all ate too much, including a fabulous rib of beef for Sunday lunch, drank too much and had a lot of laughs. (And a three day hangover.) 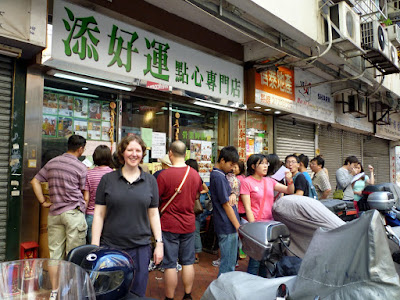 Renowned for being the cheapest Michelin starred restaurant in the world, their delectable Cha siu baau and their no reservation policy, it was well worth the early start to get a seat in this tiny Kowloon eatery. Melt in the mouth porky pastries, meatballs with mandarin peel and crispy turnip cake made for a delicious and interesting  breakfast. 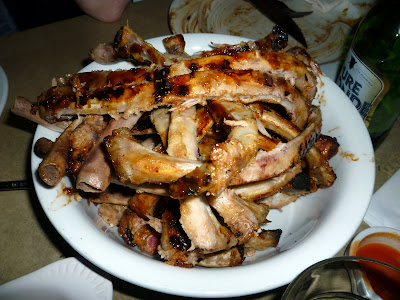 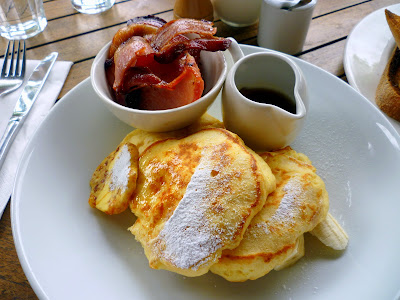 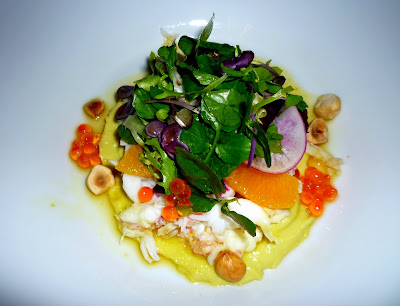 I confess that this entry is a bit of a cheat as it was impossible to chose a best bit from my birthday trip down under. So here we have: ribs (well, the remains of them) from Hurricanes in Darling Harbour.  Delicious and worth the interminable wait on a Saturday evening.
Bill Granger's ricotta hotcakes with honeycomb butter and banana for brunch at Bill's in Surrey Hills.  Fluffy perfection while hanging with the beautiful people.
Moreton Bay bugs with avocado, beetroot, mint, hazelnut, baby leaves, citrus dressing and ocean trout roe.  A mouthful to say and even nicer to eat at Cafe Sydney.
And finally something to wash it all down.  No not the many classy cocktails consumed at The Blu Bar, Opera bar and Cruise Bar but sambuca shots with my Dad and the Ewing at The Golden Sheaf in Double Bay.  A great idea at the time but not so good when we had to fly back to the UK the next day.  ﻿ 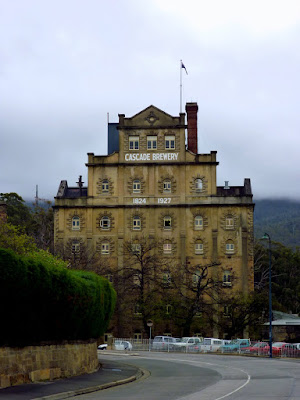 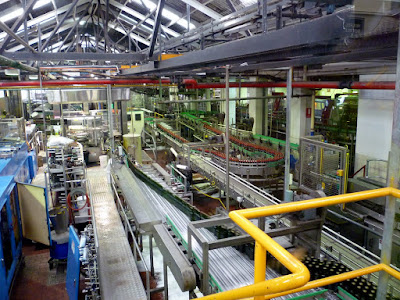 An imposing building standing in the foothills of Mount Wellington, and housing the oldest brewery in Australia, the Cascade tour was an informative, interesting and inebriated afternoon.  Highlights?  Unsurprisingly the tasting tutorials at the end.

Once a year the first green Williamette and Cascade hops of the season are harvested to supply only enough for a single days brewing. And the Brewery bar is the only place on earth where you can drink the First Harvest Ale on tap.   At pushing a tenner a pint it's pricy but pretty perfect. 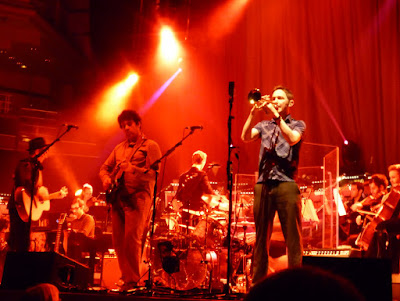 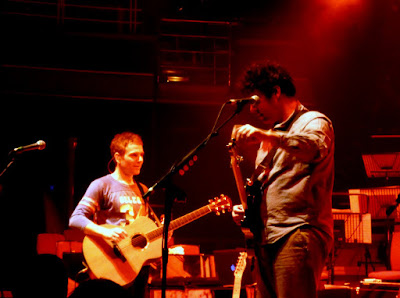 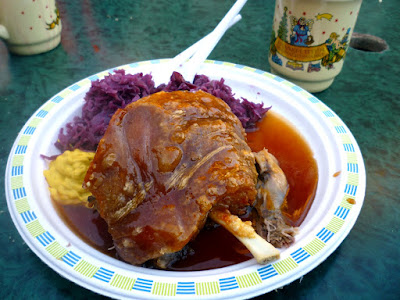 A lovely, if not a little chilly, day spent at the Birmingham Christmas Market eating Schwein Axe and drinking Glühwein was finished off with great gig at the Symphony Hall.  A lively and good humoured performance was capped by a rousing encore of 'Me and the Major' and a kebab on the way back to the hotel. 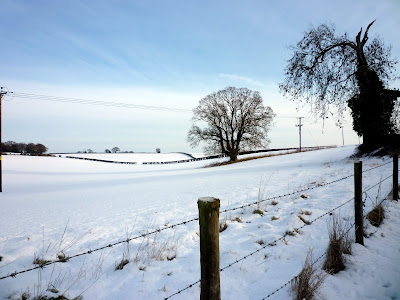 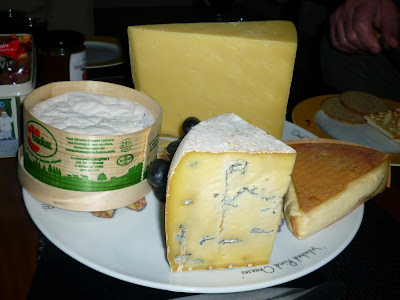 Yes, I know those knee deep in the white stuff for four months of the year may scoff at our paltry smattering but for those not stuck sleeping at Heathrow or in a tailback on the M8 it was fun while it lasted.  This picture postcard scene was taken on the way to the pub on the Wiltshire/Dorset border on Boxing day.   After our trek it was lovely to get home, and relax in front of the fire with an amazing selection of cheeses and a little drop of vintage port.