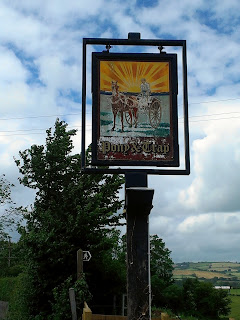 A couple of weeks ago week we were due to drive down to Exeter for a friend's birthday bash in the West Country. Some major road works around the Bristol area provided the perfect excuse for a detour; Lunch at the Pony and Trap, just outside Chew Magna in Somerset, followed by an afternoon driving through Cheddar Gorge. 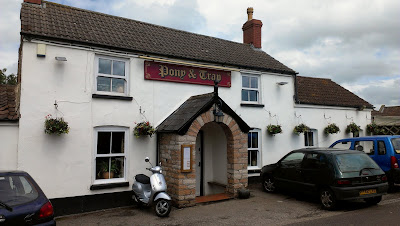 Despite being stuck out in the sticks, a Michelin star and a big reputation meant the car park was full at 12.30 on a Friday lunchtime. We were shown through the cosy front bar into the light and airy dining area, complete with stunning views across the Chew Valley.

The local Butcombe and Steam Box bitters were well kept, but lack of bread, or any sort of nibbles, meant it went to my head a little too quickly after the long journey, and I was very glad to see the starters finally arrive. 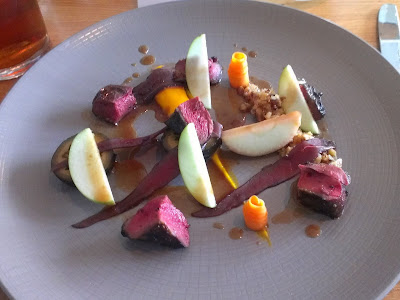 Indecision lead to a little squabble over who was going to have what, and in the end decided to 'share'. Now, as readers of this blog may know, neither the Ewing or I are completely comfortable with the concept of giving away our food (even if it is in exchange for someone else's). My duo of pigeon starter didn't help; being presented as it was in an asymmetrical way, with the uneven numbers of each element on the plate making division pretty much an impossibility.

As it turns out I was even more reluctant to share than normal. The pigeon had been presented two ways; pan fried breast, with an obscenely pink interior, and as cured strips of 'bresaola'. The plate was finished with apple; carrot, both pickled and pureed; and crushed and pickled walnuts. It was light and lovely, my only real criticism being I could have eaten far more of it, especially being as the pigeon chunks were the same size as the walnut halves. The carrot puree was an unexpected delight, sweet, earthy and complimenting both the iron of the bird and the sharpness of the pickled elements. 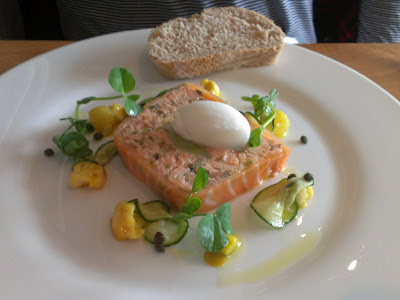 The Ewing's choice; a, pretty as a summer picture, Valley Smokehouse smoked salmon terrine with piccalilli and pickled cucumber sorbet. Again there was a real punch from both the pickles and the sorbet, which just stayed on the right side of overpowering; a good foil for the smoky, oily fish. 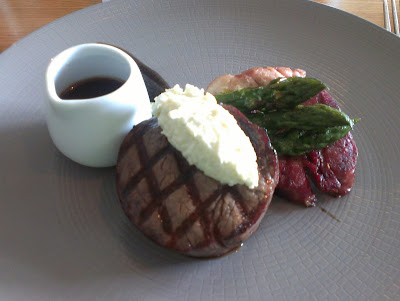 My beef fillet with tongue, veal sweetbreads, asparagus and mushroom ketchup; a poor photo, a lovely dish. Normally fillet doesn't really float my boat, but this had been cooked perfectly rare and had that butter soft 'beefiness' that makes it so revered. The sweetbread was delicate and creamy but the tongue was exceptional.

After being somewhat scarred by the offally, grey lumps that I was served in a taco in San Francisco I approached with some caution at first, but the ruby red meat flaked apart in juicy shreds and tasted like the finest corned beef known to man (a Very Good Thing). I reluctantly let the Ewing taste a few mouthfuls, and she was a love-struck as I was. 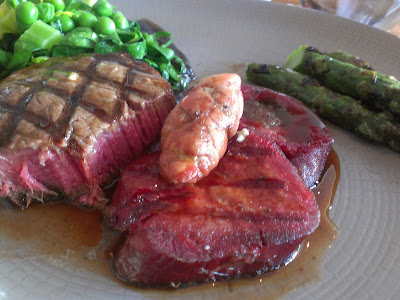 A little bit more tongue action. The spring veg, served alongside, were also perfect. Buttery and crisp with the wonderful fresh chlorophyll flavour of early summer. 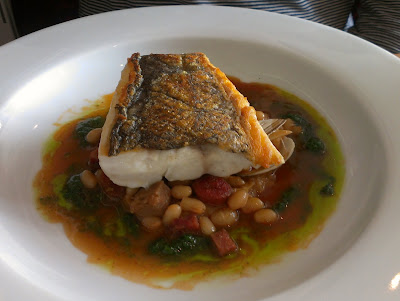 The Ewing continued her fish theme with the Cornish hake, local sausage, white beans, clams and pesto parsley. This was a decent sized, and well cooked, piece of fish and the salty, smoky sausage played well with the beans and punch from the parsley pesto. Clams are one of my favourites, and I'm always glad to see them on the menu; sadly the Ewing shares my sentiment and I didn't get a chance to sample them, but the empty shells left at the side of her empty dish proof positive that they were good. 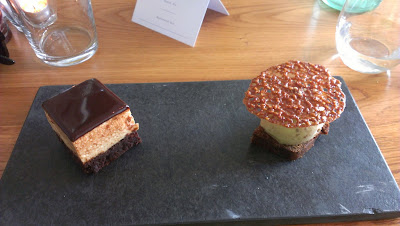 My pud was a square of chocolate brownie, topped with salted peanut mousse and chocolate ganache, served with gingerbread ice cream, on a slice of gingerbread and a sesame snap. Both great puddings in their own right, but I'm not too sure they had too much business being on the same plate together. You can even see from the picture that they didn't seem to want to get too up close and personal.

All said and done I enjoyed them immensely. The word unctuous could have been invented for the layer cake; the peanut/salt element was subtle, but it combined nicely with both the the chewy brownie and the buttery, yet bitter ganache. The ginger cake was properly spicy and dense, although the ice cream was slightly crystallised. 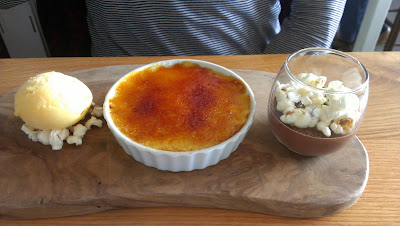 The Ewing's trio of deserts provided us with some unintentional hilarity, again revolving around complementary elements. The fennel seed creme brulee featured a good, perfectly smooth, anise-scented custard. Serving in a shallow dish provided maximum caramel crunch action, but the grilling had also made the interior a little warmer than I liked (the Ewing didn't seem too fussed, and made light work of it).

The amusement came from the other elements on the board; a orange sorbet on a bed of fennel pollen popcorn, and a chocolate pot topped with the same puffed maize snack. Apart from the fennel in both the corn and the brulee, there didn't seem to be any other link between the three. Unfazed, the Ewing was determined that they must have been designed to go together, and so added the sorbet to the chocolate glass. She then took a mouthful, promptly grimaced, and tipped it back out again.

To say watching this was amusing is quite an understatement, and lead to Fay crossly shushing me as I collapsed in fits of giggles. The sorbet turned out to be very nice, reminding me of enjoying a Minute Made lolly on a summer's day as a kid (still one of the best things on a stick). The chocolate pot far less so; essentially a bitter chocolate ganache it was too rich, and served too cold. Even the chocholic Ewing didn't really enjoy it, and I've seen her eat half a fluff-covered Kit Kat from under the sofa before. 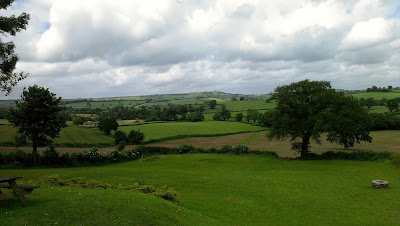 So, a very enjoyable lunch, with friendly service and a fairly modest bill (drinking a pint and a half between us helped). And who could fail to be seduced by these magnificent, sweeping views of the Chew Valley. A little gem in the West Country crown.
Posted by Amy at 18:29