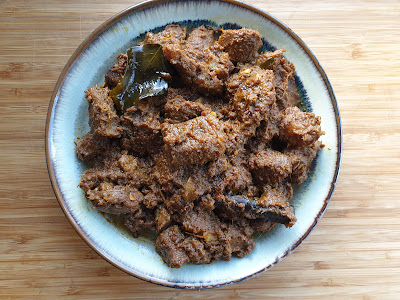 Of the (literally) thousands of things I have cooked for the Ewing, there is only one she hasn't eaten; my beef rendang. Describing it as 'gritty' (I wasn't allowed to use her coffee grinder to grind the spices...) and 'too hot'. She actually cried. Firstly because of all the chillis and secondly as she didn't want to miss out on dinner.
I must admit, I actually thought it was pretty good and bravely managed to eat my way through it - alongside a large glass of water - but rendang has always been a favourite of mine. I would say since the days of visiting Bali as a child (my Dad was a freight forwarder in the 80s, and worked with Garuda Airlines) but I can't say I actually remember eating it when we were there. Perhaps because it's a Sumatran dish, or perhaps because I was too busy drinking green Fanta and eating banana fritters. 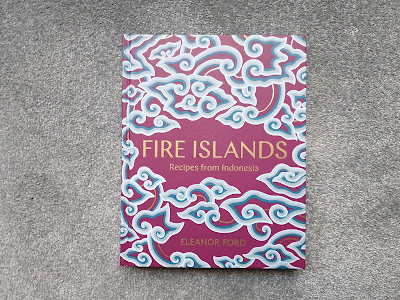 While this disappointing dinner happened years ago, I've never let the Ewing forget it. Mostly by randomly bringing it up out the blue, while dramatically exclaiming that I wouldn't make it for her again while she retorted with 'well, that's hardly a threat'. Of course, I always wanted to make it again - if only to prove to my wife I could make a version she would would like (and yes, of course, because I like it too...).
Enter Fire Islands, another book I accidentally somehow bought while browsing the internet. A purchase I quickly justified at the idea of recreating the foodie memories of my youth, as the book contains familiar satay, roast pork (a Balinese speciality) and a chicken and coconut curry from Lombok - a neighbouring Indonesian island we flew to in a tiny little turbo prop which I remember for the white sands and tropical fish and getting sick and hallucinating in bed while watching a lizard climbing the wall -  that I also wanted to try. 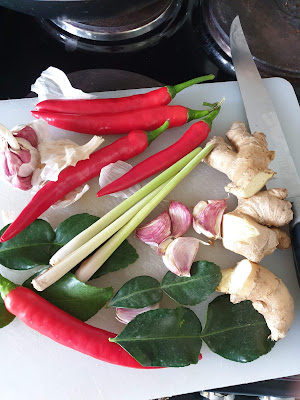 Rendang is slightly unusual as you make it in reverse to the way you most slow-cooked stews. Here you braise the beef (something that benefits from slow cooking, like brisket or shin) in coconut milk and spices until the liquid has completely reduced and the meat begins to fry in it's own fat plus the oil from the coconut milk and the intensely flavoured sauce has become wonderfully fragrant and sticky.
It isn't hard to make - you could even do the first part in a slow cooker or in the oven, and then finish off reducing on the hob - but you do have to watch over it for the last 20/30 minutes or so - it always takes a little longer than you think - so the meat doesn't catch and start to burn. 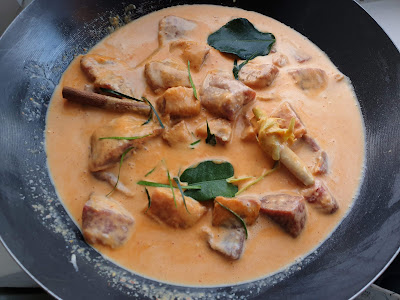 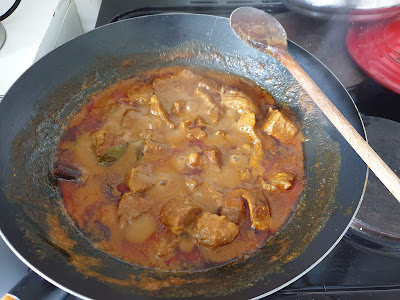 The slow cooking means that, if prepared properly until the sauce is very thick, the rendang will last for a week or so in the fridge. Although, I have to report, this was wolfed down greedily by both of us Despite it's richness, we could of happily finished it all in one go but I did manage to stretch it out over two nights, served with turmeric rice and tenderstem broccoli. I think I've finally redeemed myself. 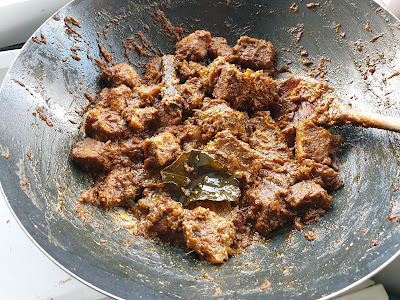 Beef Rendang
Adapted from Fire Island by Eleanor Ford
2 tins full-fat coconut milk
1kg beef brisket or shin, cut into bite-sized pieces
1 tablespoon dark palm sugar or brown sugar
2 teaspoons salt
2 lime leaves
1 lemongrass stick, trimmed, bruised and tied in a knot
1 cinnamon stick
spice paste
8 small red Asian shallots, peeled (I used one red onion)
5 large red chillies, seeded
4 garlic cloves, peeled
2.5 cm galangal, skin scrubbed (I used more ginger)
2.5 cm ginger, peeled
2.5 cm turmeric, peeled, or 1 teaspoon ground turmeric
1/4 nutmeg, grated
pinch of ground cloves
Roughly chop all the ingredients for the spice baste and whizz to a paste in a food processor or Nutribullet. Add a good splash of the coconut milk to help the blades do their work. Once smooth, transfer to a large wok or large, shallow casserole pan.
Add all the other ingredients to the wok, making sure there is enough liquid to submerge the meat – add a splash of water if needed. Bring to the boil, stirring to stop the coconut milk splitting. Lower the heat and cook at a slow-medium bubble, more lively than a simmer as the liquid needs to reduce.
Cook uncovered for about 2 hours, stirring from time to time. The meat should be tender, most of the liquid evaporated and the oil will have separated from the coconut milk. Remove the lemongrass and cinnamon.
At this stage, the meat and spices that have been braising will start to fry in the hot oil. At this point take care than the meat doesn't start to stick and burn. For about 105 minutes, you will need to stir gently but frequently over a medium heat until the coconut oil becomes thick and brown. The stir-frying then needs to be continuous for the final 15 minutes or so, until the oil has been absorbed by the meat, which will be a dark brown.
Leave to rest (overnight if possible). Rendang keeps well in the fridge and the flavours only improve. 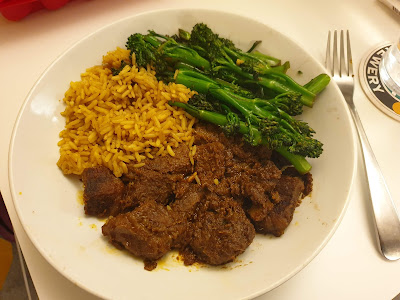