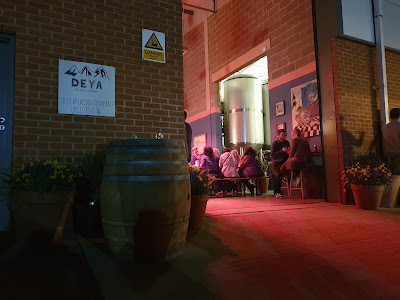 Sun is shining, weather is sweet; well, it was a couple of weekends ago, when we made the trip to the charming town of Cheltenham. A town boasting some of the best Regency architecture in England (I made the Ewing hang around a council car park, while I took pictures of the concrete) it's also home of cult brewery Deya. Found, like all good breweries, tucked away on a quiet trading estate and handily near to Cheltenham Spa railway station.

You may also notice the discombobulating nature of the pictures, which veer from night to day and back again through this post. Which, I think, artfully adds to the feeling of an afternoon drinking session that extends into the night. Looking back through my camera roll when I came to write about our evening, it's more of a wonder I had any photos that I could use. Although I did have several of the Ewing going for a wee in the bushes (sadly, now deleted, although maybe for the best) there is no privacy these days - TE. 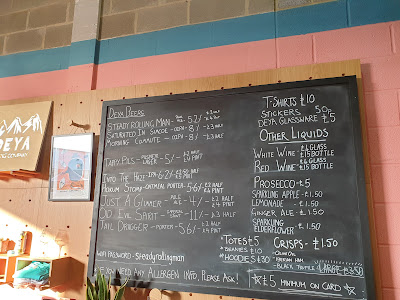 Deya are best known for their hazy beers, which lean toward the New England style, rather than the piney astringency of the West coast IPAs. They describe them on the website as 'soft, hoppy beers' and, if you are into your murk, then this is the place to be. Although, as you can see from the menu 'other liquids' are available. 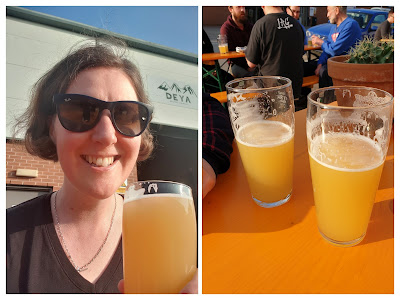 Things started very demurely, in shirt sleeves drinking a pint of Steady Rolling Man, their flagship hazy pale ale weighing in at 5.2 per cent, this is becoming a benchmark of all hazy pale ales. The Ewing had a pint of Just a Glimmer, their session pale ale at a more modest 4 per cent and super easy to drink in the sunshine.

I won't bore you with the minutiae of every beer we tasted (I think we got through them all, bar the Tappy Pils, despite it being lager weather) but, if you're not on Untappd, here are a few buzz words to give you the general idea; hop yogurt, pineapple, mango, murky, hop bomb, hazy, tropical, juicy banger etc. etc. 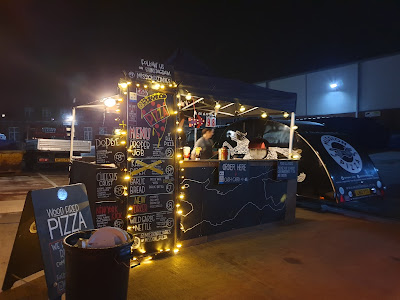 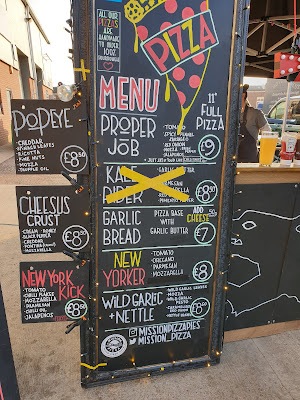 Food come in the form of a roster of rotating food vendors which, on our visit were Mission Pizza - wood-fired pizza slingers who specialise in vegetarian and vegan pies.

While I'm not absolutely sure I want to give up my mozzarella for cashew nut cheese any time soon, I'm a big fan of a meatless pizza (or any kind of pizza in all honesty) and I was very excited by their menu which featured the 2000s supermarket classic of spinach and ricotta, pimped up with pine nuts and truffle oil; and a spicy choice with chilli oil, chilli flakes and jalapenos. 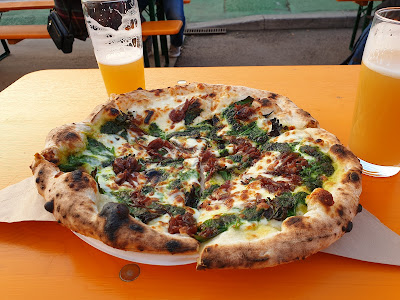 But in the end the choice was a no-brainer - the wild garlic leaves, wild garlic pesto and nettles with caramelised onion and mozzarella cheese. This was an excellent pizza with a perfectly puffy, chewy crust, bitter greens and sweet onion. My only criticism was it was perhaps a little too sweet. Some of the aforementioned chilli flakes or a slick of spicy oil wouldn't have gone amiss. 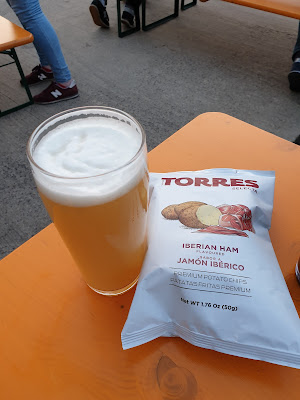 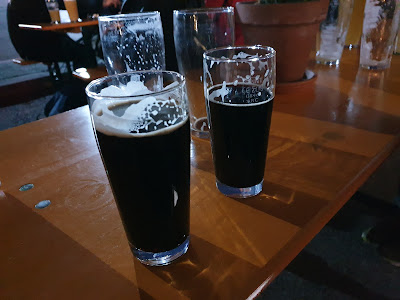 After our pizza we moved on to a crisp chaser - the delicious Torres Iberico ham flavour - with another pint of murk, this time the Into the haze IPA. This was followed by the 'last beer' of the night; the Old Evil Spirit, a roasty, malty imperial stout with a healthy dollop of dark fruits and cocoa.

Unfortunately they only served this in halves and not thirds. Normally I'd say that but not really mean it, but on this occasion an eleven per center, that slipped down with nary a hint of booze, probably signified the beginning of the end. 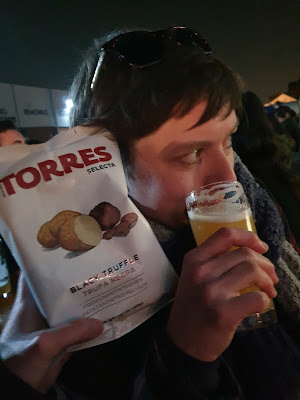 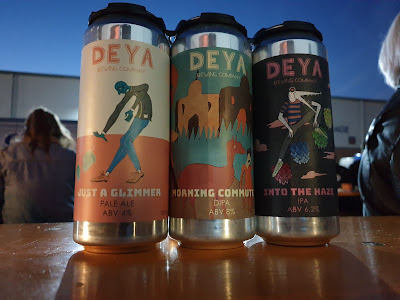 Of course, that wasn't the end of things. On returning to the bar to buy some cans to take home the Ewing got coerced into buying another round of delicious DIPAS, plus yet more crisps, this time the black truffle flavour.  Funky and deep and a little bit salty; and the crisps were pretty good too. 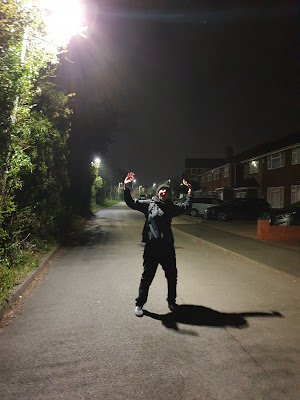 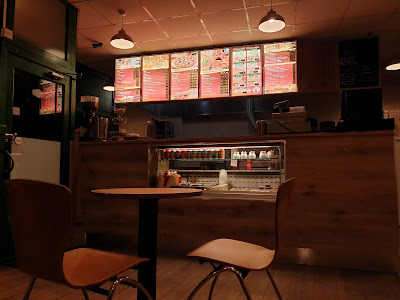 I'm not entirely sure what happened on the way back but I know it involved going to the kebab shop; getting stuck in the kebab shop; buying a lighter; losing a lighter, losing my earphones (found the next morning with the help of Toby the three-legged dog TE); getting caught short; dancing in the street (in my Beavertown beanie, no less) and, as the pièce de résistance, getting lost in the garden of a nursing home. 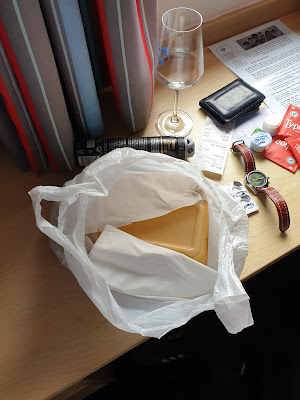 Thankfully we did make it back, although the saddest part of the whole trip came on waking up at the hotel the morning after. After spending a few minutes wondering where I was and wondering if I would ever feel ok again, I realised that the hard won kebab that I had carefully carried home remained uneaten. On the plus side some enormously fragile glassware, see the top of the picture, we had bought along with the beer was still somehow intact. 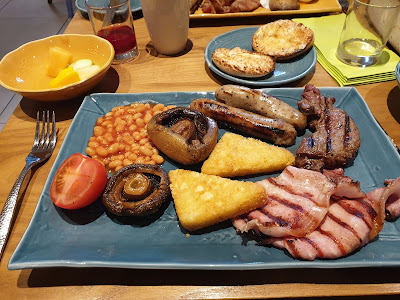 Of course, missing out on my bedtime snack made popping next door for the all you can eat Harvester breakfast (with an extra rump steak and an endless stack of buttered crumpets with Marmite) even more welcome.

All in all a perfect weekend and perfect training for our imminent trip Down Under, where the Ewing and I are going to hit the Inner West beer crawl, as we did on our last visit two years ago. Only this time I hope to actually remember enough of it to be able to write it all up on here. Wish me luck....
Posted by Amy at 22:42 No comments: 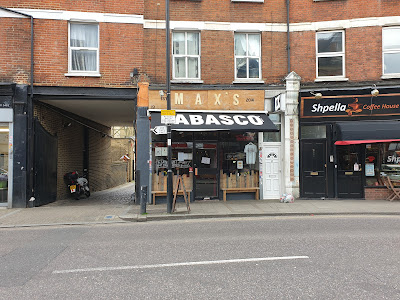 Writing a blog (or certainly this blog) is about 45 per cent trying to avoid the most obvious cliches, 45 per cent repeating yourself and ten per cent actually writing original, witty content. I appreciate the latter figure could be seen to be a little generous.

One of my least favourite cliches - and also one I probably repeat the most - is the classic; 'has been on  my radar for a while'. While it is often invariably true - there will always be an, ever-expanding, list of places I want to visit at any given moment - it is also more hackneyed than a taxi rank at kicking out time. Still better than some of my metaphors, though. 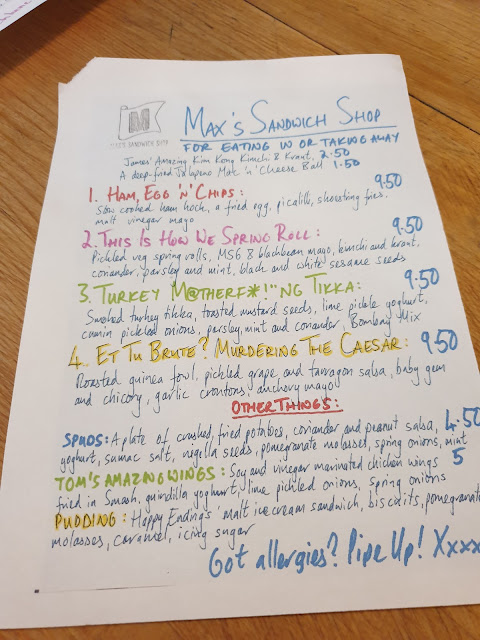 In the case of this post, however, it seems entirely appropriate. In fact not only had it been on my list for a while, it was also one of the only places the Ewing had expressed any interest in going to; mostly after seeing the estimable Max Halley himself appearing on Sunday Brunch, making a fish finger sandwich stuffed with Scampi Fries. 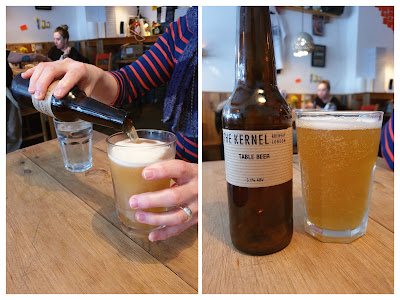 I'm hardly sure I need even say this but, being a Saturday afternoon (and certainly after our cocktail crawl the night before) we were a little worse for wear, although a brisk walk up the Stroud Green Road had helped somewhat. The Ewing plumped for a hair of the dog, although she did show some restraint by picking a Kernel Table Beer at an eminently sensible 3.1 per cent. 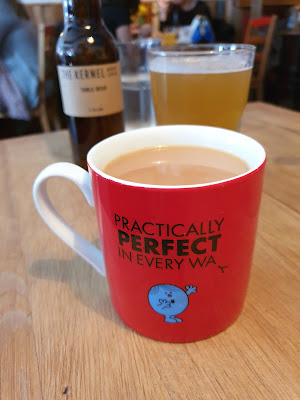 I ordered a cuppa - yours for just a quid - and was rewarded with this practically perfect example, hot and strong and in a very appropriate mug. I also ordered a Arnold Palmer, the magnificently named 50/50mix of ice tea and cloudy lemonade that was said to be a favourite of the flamboyant golfer. It's one of my favourites, too, and unexpectedly exciting to see it on a menu this side of the pond. 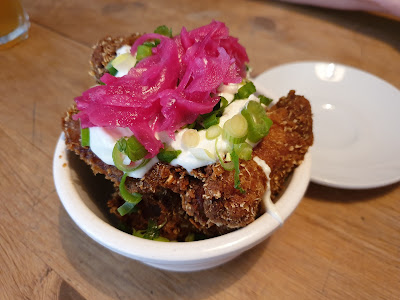 Tom's Amazing Wings - soy and vinegar chicken wings fried in Smash, guindilla yogurt, lime pickled onions and spring onions - lived up to their name. The potato flake coating was revelatory, as was the addition of pickled chillies with the yogurt. Double onions provided tang and crunch. 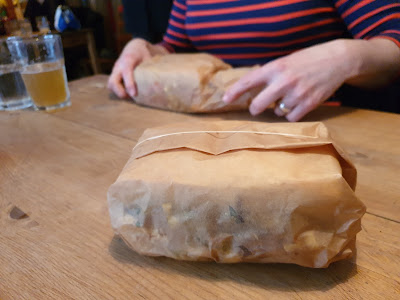 Brown paper packages, tied up with string, these are a few of my favourite things. Well, a slightly less exciting elastic band, if I'm being pedantic, but still an exciting parcel of squishy carbohydrates and promise. 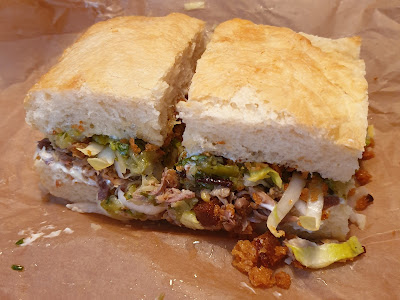 Let's just take a moment to look at it, a hulking beast comprising of warm, pillowy foccacia, stuffed to the gunwales with all sorts of exciting things that spill out as you unwrap the waxed paper bundle. 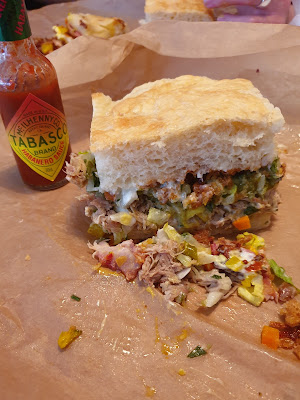 This was everything I love between two pillowy slices of excellent bread. Soft sticky strands of guinea fowl, sweet and sour salsa and salty anchovy, all offset with the crunch of bitter leaves. I would go as far to say it rivalled my Mum's Boxing Day turkey sarnie; the highest praise indeed.

If there was one, minor, quibble was that the tiny croutons made the whole thing pretty rich, a situation that probably wasn't helped by my delicate constitution. I could also have done with a metric tonne more of the glorious mayo, but I'm just greedy. 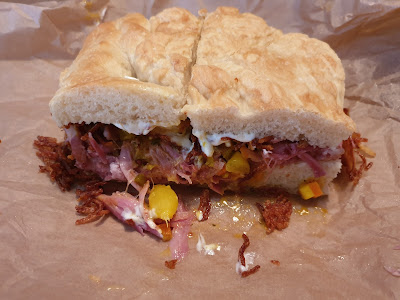 The Ewing chose their signature sarnie, the Ham, Egg 'n' Chips filled with slow-cooked shredded ham hocks, piccalilli, a fried egg, shoestring fries and malt vinegar mayo. If the anchovy mayo was great, this could have been even better, mixing two of my all-time favourite condiments that gave the creamy spread an extra tangy punch. 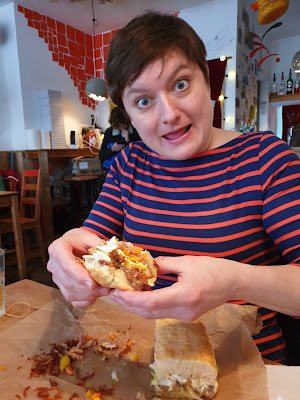 As you can see, the Ewing was utterly in her element, giddy on carbs and the fact she had finally made the pilgrimage to try what is, possibly, London's most famous (certainly one of the best) sandwich.  I was glad that we could tick another one off the list, and squeeze in another cliche to boot.
Posted by Amy at 22:06 No comments: