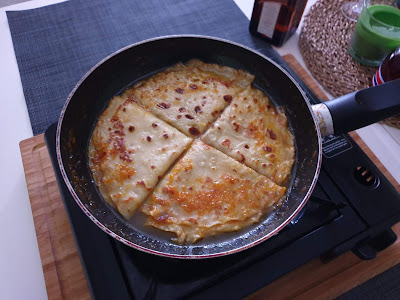 Of all the feast days Pancake Day must be the one that's closest to British people's hearts. When I was at primary school we would have an annual race across the playground, and letters home the week before would ask parents to supply their children with frying pans and an extra thick cold pancake which we were instructed not to eat. there were always several at the end of the race dusted in a light covering of gravel and with teeth marks around the edges. 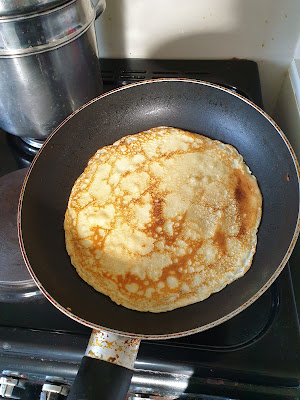 Pancakes of pancake day must be thin lacy crepe-style ones, not my, usually preferred, puffy Americanised version. lemon and sugar is the best topping, but maple syrup or even Nutella are acceptable. this year, though, spurred on by #cookbookchallenge, I decided to make classic crepe suzette, with the pre-made crepes warmed through in a syrup of caster sugar, lemon and orange juice before being theoretically flamed in orange liqueur. 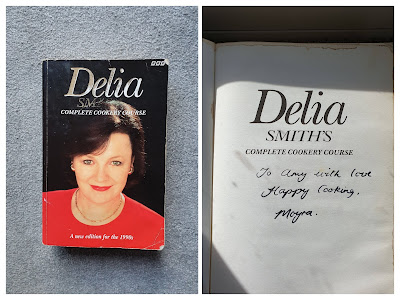 I sourced the recipe from the interminable Delia, from a copy of her seminal Complete Cookery Course, a beloved present given to me by my aunt when I finished my A Levels. And far more useful than anything I learnt at school. 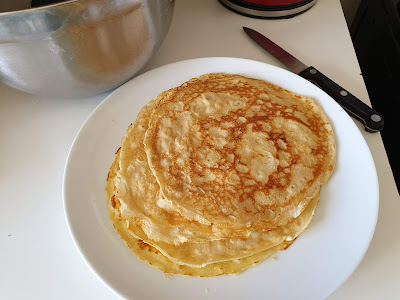 As you might expect, the recipe for pancakes worked perfectly, even that tricky first one came out surprisingly well. I always think I don't have the patience for pancakes, but I make them quite a bit, both crepes and american-style, and they always turn out rather well. The Ewing says I'm a bit of a tosser, so that might have something to do with it. 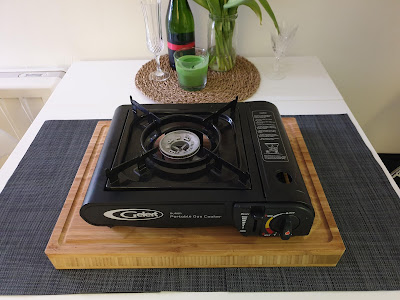 There's nothing like a bit of at-the-table showmanship, and you can argue this was nothing like a bit of at-the table-showmanship as, not being in the possession of a silver serving trolley,  I had the Ewing bring the camping stove down out of the loft instead. But, lack of fancy equipment aside, it was an awful lot of fun. And I survived with eyebrows intact. Even the Ewing had to concede it was entertaining, although she'll probably add her own comment here to the contrary (I was quite impressed actually and pleased you didn't set anything else alight - TE). 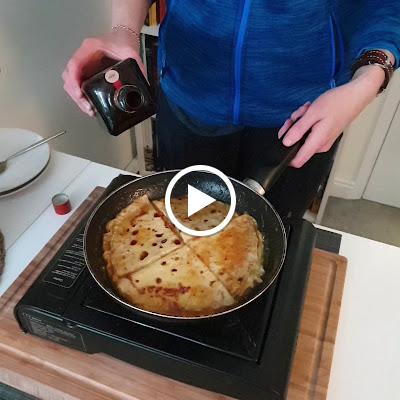 She even conceded she liked the resulting pancakes, although that may have been due to the fact I had sloshed several huge sloshes of Cointreau into the pan while trying to ignite it. And several more for good luck. I topped the pancakes with the syrup, a little more orange zest and creme fraiche to serve. 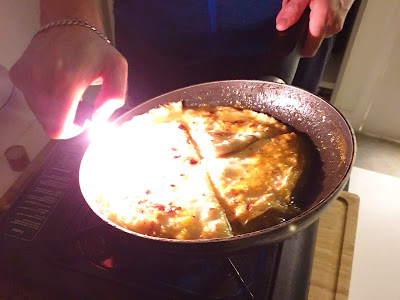 Sift the flour and salt into a large mixing bowl
Make a well in the centre of the flour and break the eggs into it.
Whisk the eggs and when the mixture starts thicken, gradually add small quantities of the milk and water mixture, still whisking, until most lumps have gone and the batter is the consistency of single cream.
Leave the batter to stand for 30 minutes.

Melt a small knob of butter in a frying pan When it's hot add a small ladle of batter and swirl around to from side to side to get the base evenly coated.
After about a minute lift the edge with a palette knife to see if it's lightly golden.
If it's ready, flip the pancake over (or use a palette knife) – and cook for another minute or until lightly golden on both sides.
Slide it out of the pan on to a plate and continue until you have used all the batter.
For the sauce, mix all the ingredients - with the exception of the butter - in a bowl.
Melt the butter in a frying pan, pour in the sauce and allow it to bubble away and thicken for a few minutes.
Place the first crepe in the pan, folding it in half and then half again to make a triangular shape. Slide this to the edge of the pan then add the next crepe. Continue like this until they're folded and warmed through in the sauce.
Four fit perfectly into my pan, which was perfect for me and the Ewing.
To flame add the liqueur and heat through, then  tip the pan slightly and carefully light the sauce with a match or lighter.
Wait for your applause (and collective gasp of amazement or fear - TE) and then serve the pancakes with the remaining sauce poured over and a dollop of creme fraiche or cold cream. 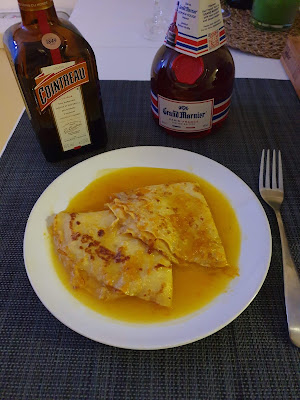