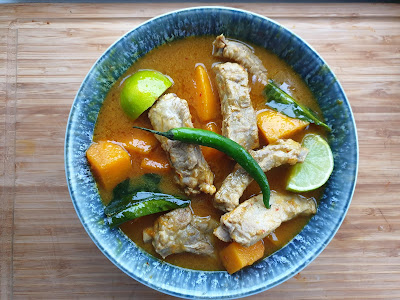 David Thompson's - the Michelin-starred Sydney-born chef - distinctive pink tome on Thai food is often considered the best example of the genre. In fact, one of the best cook books full stop. Much to my shame my copy has sat, unused and only occasionally flicked-through, on my bookshelf for a good decade or more. The perfect example of what #cookbookchallenge was dreamt up for. 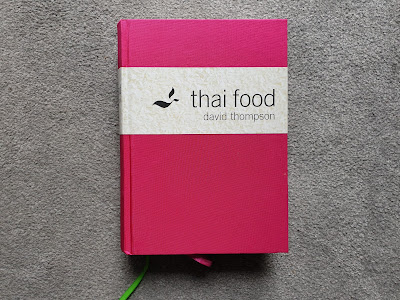 When I actually picked it back up and finally committed to cook from it, I was reminded of my previous ambivalence. I mean, I'm a an experimental cook, but recipes such as curried fish innards, or curried ash melon, or oyster and banana blossom salad, or recipes that require apple eggplants, or winged beans, or Siamese watercress, or langsart (a bitter sweet fruit with a pale brown skin with an inner stone, according to Google) aren't a particularly practical choice if you live in the leafy Chilterns. 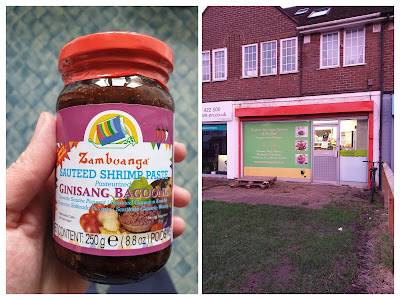 Of course, you can pick up the majority of unusual ingredients even in the Home Counties, if you know where to hunt. I found thai basil in Waitrose (which, disappointingly, you didn't even need in the recipe I ended up choosing) and we found the shrimp paste (the recipe actually calls for 'small fish, smoked over coconut husks' so I improvised...) in a small corner shop selling far eastern ingredients in suburban Aylesbury, that I sometimes walk past on my daily commute.

(NB, if you ever want to visit, they only seem to open in the evenings. And more often than not, you have to call the number on the door so you can be let in, then step over an old bicycle in the doorway. They do have a great range of fish-flavoured crisps, though.) 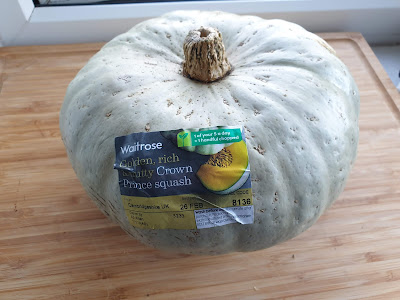 The star of the show, however, was the majestic crown prince squash, that I ended up buying after I, quite literally, popped to the shops for a pint of milk. As it turned out to be a rather expensive impulse purchase, I wanted to do it justice and, when flicking through my cook books for some inspiration, found a recipe for a pumpkin and pork rib curry in Thompson's aforementioned Thai Food. 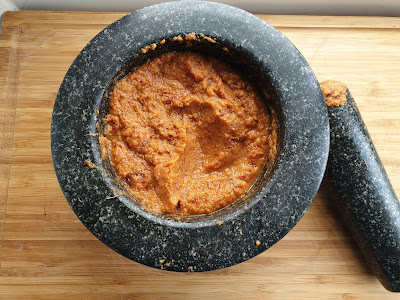 And, so to the big question; was it worth the effort? Honestly, probably not. That said, making the curry paste was far easier than anticipated - although I did the lion's share of the work using the Nutribullet - and the Ewing was very effusive in her praise, which was just what was needed after a long afternoon chopping, and simmering and pounding, only to end up with something far murkier than I had imagined. Nothing an extra slug of fish sauce and a judicious squeeze of lime couldn't lift, even if the final dish was more orange than vibrant red. 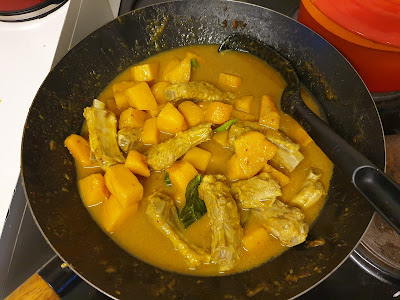 To make the paste, remove the seeds from the red chillies and soak in hot water for ten minutes then drain.
Add the chillies, lemongrass, garlic, galangal, shrimp paste and shallots to a blender or Nutribullet and process until you have a fine paste (alternatively grind in a pestle and mortar, starting with the hardest ingredients first.
Wash the pumpkin in cold water. Blanch the pork ribs from a cold water start, then rinse and gently poach in a cup of the coconut milk, topped up with water if needed, until soft. About 1 hour. You can add any offcuts of galangal, shallots and lemongrass to the poaching liquid for flavour. Drain the pork, reserving the coconut milk.
Heat the coconut cream in a wok or shallow pan, stirring constantly to stop it scorching. After it has separated, add the curry paste and fry over a medium heat, stirring constantly.
After 5 minutes or so the paste should be fragrant and oily, add a little of the reserved coconut milk if it seems too dry.
Add the palm sugar and the fish sauce and then the pumpkin. After a few minutes add the rest of the coconut milk and simmer until the pumpkin is tender. Add the pork ribs and heat through.
Finish with the kaffir lime leaves and the green chillies. Remove from the heat and allow to stand for five minutes before serving with steamed Thai rice and lime wedges
The curry should taste salty, hot, sweet and creamy. Like the best things in life. 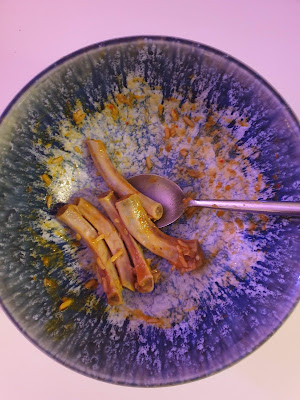