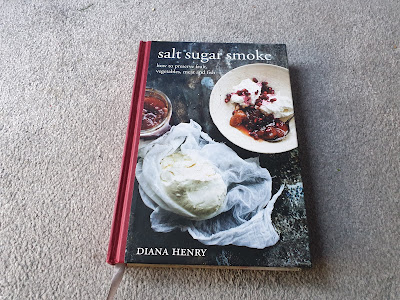 I've started a new job this week, which is both exciting and exhausting in equal measure. At least they serve good coffee. Which makes me think I'm already turning into the kind of person who appears on daytime lifestyle programmes and is horrified to learn the reason they've got no money is they've spent more than their mortgage repayments on skinny cappuccinos with an extra shot. Oh, and I'd better take one those of cereal bars while I'm here, too.

In order to prepare myself, I elected to spend most of last weekend doing as close to nothing as I possibly could manage (I've had previous practice). Catching up on sleep, going for walks and trying to recover from my leaving drinks. I'm still not quite sure I'm over it  but at least I know my limit when it comes to drinking pints of Deya's Steady Rolling Man pale ale... 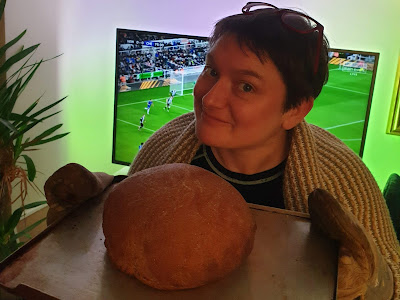 As a bit of a distraction technique, and so we'd have a few treats to enjoy in-between napping, I also decided to rope the Ewing into assisting me with a couple of mini projects from one of the Ewing's favourite books, Diana Henry's Salt Sugar Smoke, for this week's #cookbookchallenge. And as an added extra she even made a loaf of Nigella's Finnish rye bread. Oven gloves model's own. 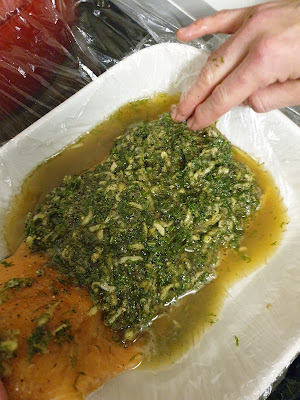 First up was gravlax, something we've made a few times, but this time it came with a twist, being cured in brown sugar, grated apple, dill, whiskey and sea salt. The recipe asks for a peaty whiskey, but I used Rittenhouse Rye as that's what we had knocking about in the cellar cupboard under the stairs. Probably a good time to invest in a jar of maraschino cherries and whip up a few manhattans. (we have maraschino cherries in the fridge - TE). 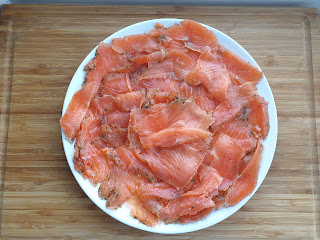 While I'm not sure the apple really came through in the finished dish, I very much enjoyed the balance of flavours. Plus we managed to judge the curing time perfectly so the fish was cured throughout without being overly salty or tough at the edges. If you're missing that fruity hit, then the book also features a recipe for a green apple and red onion salad to eat alongside, but we ended up eating most of it with the Ewing's home made rye bread and lots of cream cheese.

If you haven't made it before, it's really worth a bash, especially if whole salmon is on offer. Very easy and very impressive if you've got guests. Alternatively just eat it  in your pjs, in front of the cricket with a glass of fizz in hand; like we did. 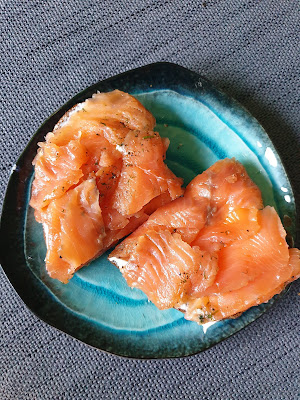 Method
Line a dish, big enough to hold the salmon, with a double layer of clingfilm.
Put one of the pieces of salmon, skin down, on top. Rub it all over with half the whiskey. Mix the sugar, salt and pepper, dill and apple together in a bowl and spread it over the salmon. Pour on the rest of the whiskey and put the other piece of salmon (skin side up) on top. Pull the clingfilm round the fish then put a chopping board or plate on top and weight down (cans work well). Put into the fridge and leave to cure for two to three days, turning every morning/night and pouring off any liquid. We made it on Thursday evening and it was ready to eat on Saturday morning. Perfect timing for brunch.
Remove the clingfilm and scrape the cure off both pieces of fish.
To serve, slice the salmon thinly with a sharp knife just as you would smoked salmon (leave the skin behind). Wrapped in the fridge it will keep for a week. 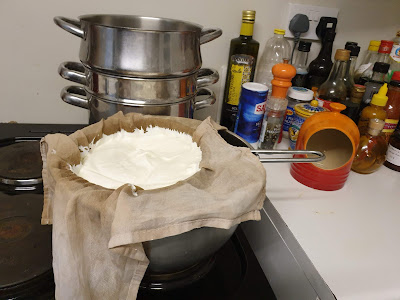 While the salmon was curing it was also the perfect weather to make labneh, a kind of 'cheese' made from strained greek yogurt strained in a muslin cloth over the sink. You can also do this in the fridge, but ours is predictably packed to the gunwales, making winter the best time to do this so it doesn't get too warm while it's hanging up.

I can also assure you our muslin was freshly washed, unfortunately it has been dyed an attractive beige by the Ewing using it to strain her homemade cold brew coffee....(why, thank you - TE) 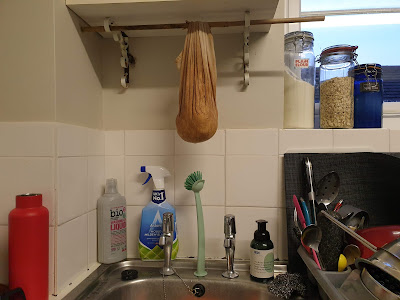 method
Line a sieve with a piece of muslin or a brand new J-cloth and set it over a bowl.
Mix the yogurt with the salt. Tip into the cloth, tie it up and hang somewhere to drain. Over the sink is ideal if it's cold enough, or in the fridge over a bowl.
The yogurt will lose moisture over the next 24/48 hours. Help it along by giving it a gentle squeeze every so often.
When it is firm enough, take small amounts and roll into balls before rolling in herbs and spices.
We used fresh, finely chopped chives, dried chilli flakes, dried mint, dried dill and sumac.
Place the balls in a sterilised glass jar and cover with rapeseed or olive oil.
These will keep in the fridge for up to two weeks.
The leftover oil can be used for salad dressings/pasta dishes etc. 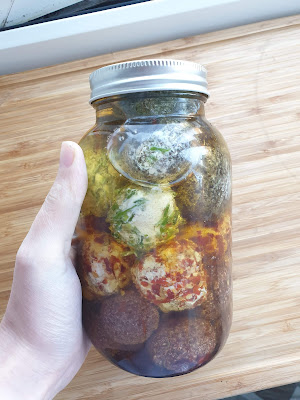