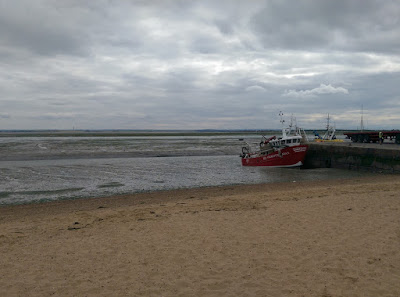 In case you’ve been living in a cave, underwater and on the moon, you have scarcely failed to notice 2016 is already being dubbed 'the worst year in history'. Slightly hyperbolic perhaps, but with all the doom and gloom dominating the news recently, it's hard not to feel a bit down.

As a consequence, I’ve been banned from talking about politics at home, Brexit especially -  a courtesy I shall extend to the blog, although more to avoid a spittle-flecked keyboard - but, amongst the incredulousness over the next ludicrous revelation, it has also led to some mulling over the concept of identity. Do I feel a Londoner? a Southerner? English? British? European? a citizen of the world? and does it really matter anyway? 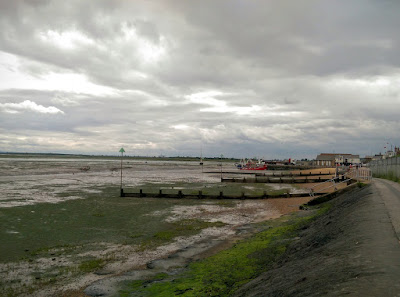 Although I’m happy and (mostly) proud of where I come from, I can’t help feeling borders often seem rather arbitrary, and peoples’ behaviour towards them pretty primal. Yes, there may be practical and political concerns to their enforcement, but it seems to me easier to look outwards rather than embracing parochialism, especially in recent times.

Of course, if's perfectly possible to be patriotic and not partisan - so, as the old adage goes, if you can’t beat them join them. Which is how I found myself facing a strange sort of exposure therapy by taking a mini break in Southend, an area ranked number 6 in the most Eurosceptic areas of Britain in a recent YouGov poll. 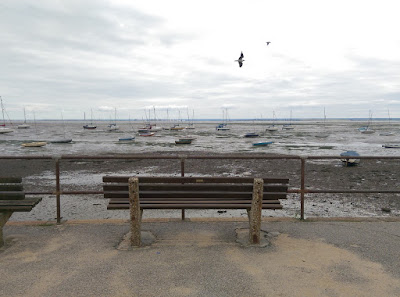 Being an island, we have a long and proud fishing history and one of the oldest of these industries is cockling. Catching these slippery little molluscs has always been big business in Essex, as this Pathe newsreel from 1949 shows, and it's a tradition that still endures today. So, after checking in to our hotel, we set off on the three miles along the seafront to Leigh-on-Sea, home of the cockle sheds. 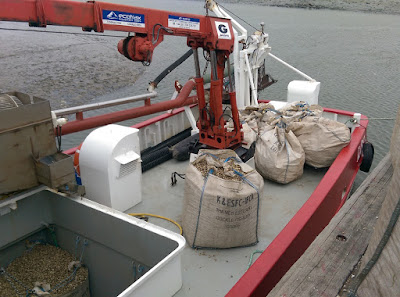 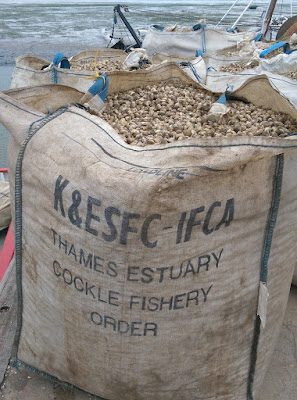 Interestingly the website plastered across the boat on the harbour, read www.cockle.eu, but the guy moving the sacks of cockles couldn't have sounded more Cockney if he tried. Something I found out after the Ewing decided to pop to the loo at the top of the harbour, I went for a nosy about, not realising the gate had been locked behind me...

Luckily, after nearly being scooped up with the cockle shells, they soon heard my shouts and saved me from an imminent crushing. After a second chiding from my wife, who was beginning to worry I'd fallen in the drink, we finally reached the sheds in desperate need of a drink. 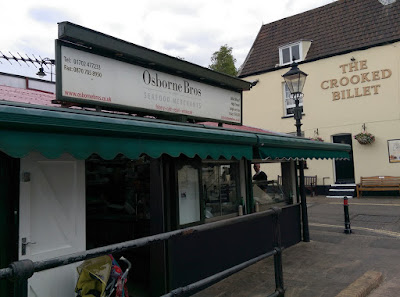 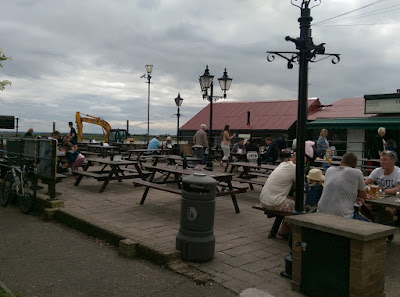 Osborne Bros is the place to come, with the freshly-caught fish being boiled on the adjacent 'Cockle Shed Row' and served from their cafe housed in a 18th century stable mews which was used to house the horses delivering ale to the the Crooked Billet. The pub is still there, and still owns the outdoor courtyard, meaning you can wash your crustacea down with a cheeky pint. 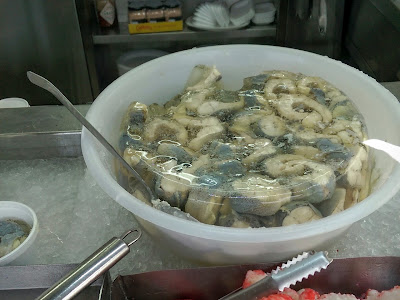 As well as the cockles, eels have been a popular fish in these parts since Victorian times. Mainly as they were some of the only aquatic life that could survive in the heavily polluted water of the Thames estuary. Originally cheaper than meat, they were soon being used as the fillings for pies that were being sold, along with mash and parsley liquor, at the black and white-tiled shops that were opening all over the east end. But more of that later. 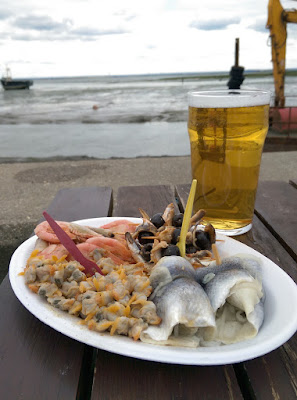 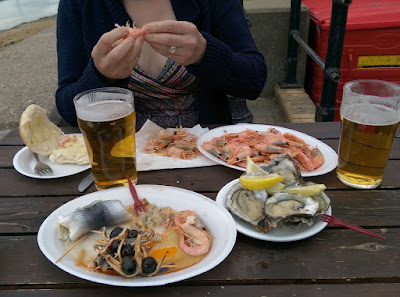 I'll eat a lot of things, but lumps of cold fish in aspic, still in the shape of the bowl it was turned out in, weren't really doing it for me. Perversely rollmops, lumps of cold fish marinaded in sweet vinegar, are a favourite, so we chose a platter with a couple of those; joined by cockles - doused in lashings of malt vinegar - small shell on prawns; and fancy skewers of anchovies and black olives (which, I'm pretty sure were not a Victorian favourite). Add a pint of Hopback Citra and it made a perfect al fresco lunch.

Well, it would for mere morsels, but I was with the Ewing, so we ended eneded up going back, twice, for more treats including buttered bread rolls, which I stuffed with tiny prawns and cocktail sauce for a DIY sarnie, another pint of shell-on prawns and a plate of freshly shucked oysters. A proper treat and less than 30 quid, all in, for an ample feast. 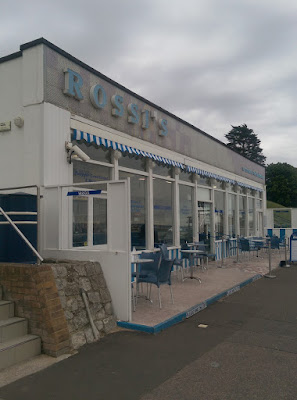 As the title of the blog suggests, you can't have jelly with out ice cream; and while we managed to skip the eels, we had walked past four separate branches of local ice cream purveyors, Rossis, on the way to the cockles, meaning an ice desert on the way home was fait accompli. 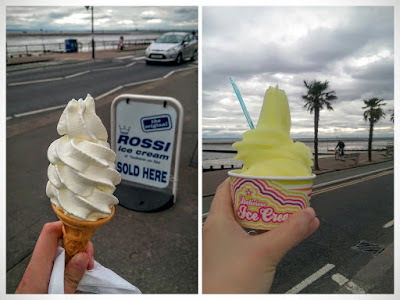 And not just one ice cream, but two - the first being their traditional, and best-selling, vanilla from their branch in the Arches. It's offered either whipped or scooped, but who can resist a (not) whippy? There's something wonderfully nostalgic about fluffy swirls of soft serve, piled up in a cheap wafer cone and this was a cut above your usual 'stop me and buy one' vans of my youth,

Their second bestseller is the lemon ice only served in tubs, as it has the tendency to slip off cones, said the stern sign inside their wonderful art deco Pavilion branch. It's a curiously refreshing whippy/sorbet that wasn't really needed on the overcast day we visited, but was still very much appreciated - yes, I know you may think the palm tree-studded vista above looks like the Santa Monica boardwalk, but squint and you can see North Kent. 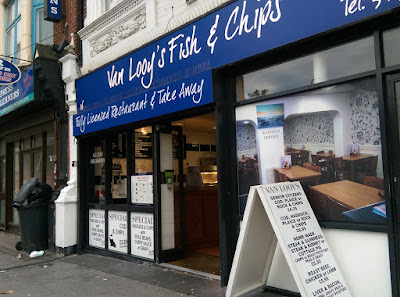 We were going to stop at the recommended  Oldham's in Westcliffe for fish and chips on the way home, but my ocd tendencies (and laziness) weren't enamoured with the inland detour, meaning that our route would take us back on ourselves, and so we headed back to The Last Post for a beer before hitting Van Looy's for our fish supper (and two wallies). 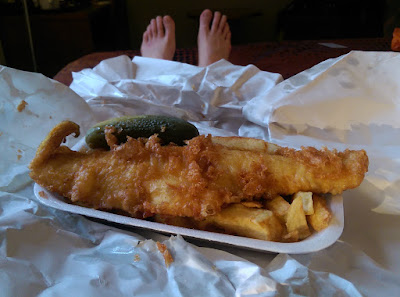 As the chippy also happened to be next to the hotel, we picked up our dinner and headed back to our room, cold cans of Red Stripe from the offie in hand, to watch the rest of Today at Wimbledon. The fish was good - freshly cooked, skin on (the southern way) cod - served with decent chips and an extra gherkin, and it cost just £3.50. Great guy behind the fryer, too, as well as an entertaining regular who enjoyed attempting to converse with the Ewing in German. 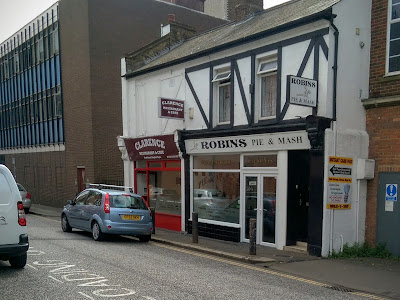 if you should be in Rome, live in the Roman manner, and in this neck of the woods that means pie and mash for breakfast. Fortuitously, as with our dinner the night before, we found Robin's Pie and Mash on the road adjacent to our hotel. 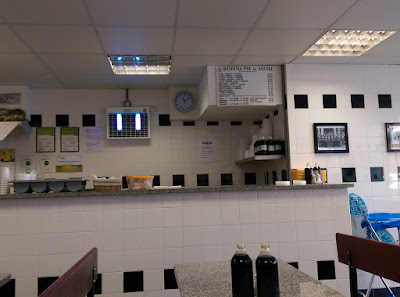 In scenes scarily reminiscent to today, the mid 50s saw a swift rise in rent in the eastend of London leading to a lot of factories moving out of town, taking with them the local working class population in pursuit of jobs. Add the rise of convenience food and American fast food imports and plain old pies just didn't cut it any more, leading to the slow decline of these once veritable institutions.

But proper pie and mash shops (never restaurants), with their white tiles, mirrored walls and marble tabletops, have somehow clung on to remain one of the last bastions of the East End/Essex borders - although the sawdust-covered floors, used to gather up the spat-out eel bones, have thankfully been replaced with something a little easier to mop. And bucking the trends of the last few decades, Robin's has been expanding to open new branches as people seek to return to the food of their forebears. 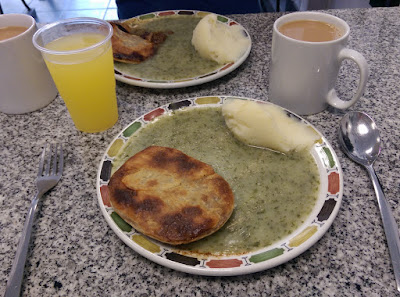 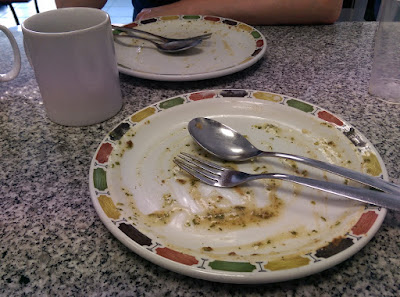 Despite my Grandad Alan being born in Romford, I haven't had much experience of the good stuff and was eagerly awaiting our experience. Going with 'one pie, one mash, and liquor' and a healthy dousing of homemade chilli vinegar, the resulting plate exceeded my, admittedly pretty low, expectations. The pie particularly stood out for praise, with it's crispy lid and pleasing soggy bottom (apparently custom for the bottom to be suet and the top short), and filled with rich mince in a sticky gravy. You can keep your gummy parsley liquor, though. 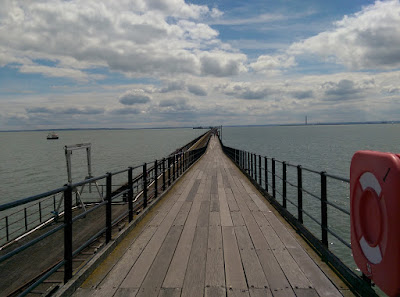 Our visit finished with a walk down Southend Pier which, at 1.3 miles miles, is the longest pleasure pier in the world. Wandering down it, I felt like I was on the long road to nowhere, pretty apt for this strangely remote part of the world. If you look at a map of Southend it's quite fascinating - the A127, going west to London and then virtually nothing past Shoeburyness to the east.

And while I can't definitively say I felt any more or less English after our few days away, I can say that I felt at home. Whatever that might mean. As native Essex boys, from up the road in Colchester, Blur once wisely said:

And into the sea go pretty England and me
This is a low, but it won't hurt you
When you are alone it will be there with you
Finding ways to stay solo