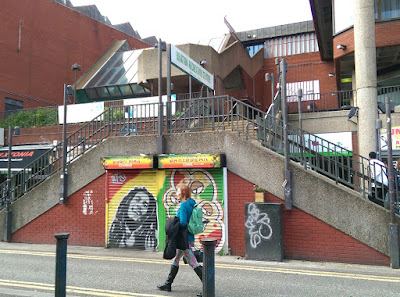 It’s been a long time since I used to be a regular visitor to SW9 (around 1999, when a friend had a flat just off the high street and we spent the Saturday night under the arches at Heaven and Sunday wishing we hadn't) but there’s still nothing quite like Brixton on a Friday summer’s afternoon. Walking onto Electric Avenue you feel a palpable jolt; the muggy atmosphere and smells of meat grilling over charcoal, overripe mangoes and dried fish feels a little like a Spike Lee film.

Of course now I’m older and a (little) wiser; and, as if to confirm that fact, my most recent visit to Brixton - or 'Brickston' on this occasion, to chalk up a couple more #brutaltour stops - didn’t coincide with a visit to Plan B (RIP) or a gig at the Academy, but a work meeting of information and record managers in Westminster. Which made rather a staid contrast to the bustle of Brixton, where I was confronted by a riotous steel band and a baying mob, upset that KFC was unexpectedly closed, within minutes of emerging from the tube. 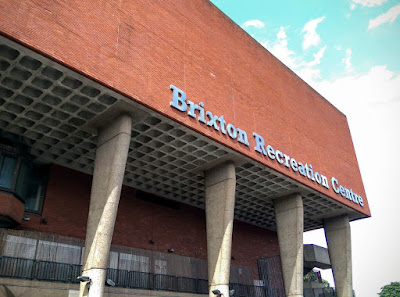 First up was Brixton Recreation Centre - architect George Finch for Lambeth Borough Council 1973-1985. With its red brick frontage and iconic concrete pillars, the Rec remains a well-used hub of the community despite murmurings that the amount needed for its upkeep mean it will eventually be razed to the ground for housing and a new centre built on the site of Brixton Pop, a shipping container food court next-door.  If it’s open and your passing, it’s also worth a look inside at the twisting brick staircases and glass atrium. 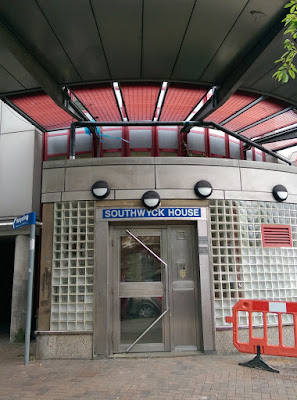 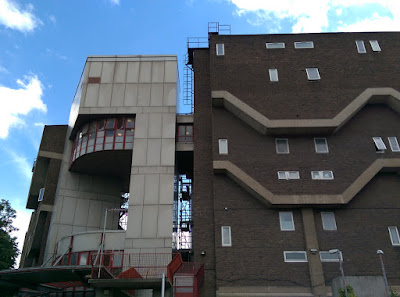 Southwyck House - architect Magda Borwiecka, 1972-81, for Lambeth Borough council - is an imposing building on Coldharbour Lane that’s part of the Somerleyton Estate. Known locally as the ‘barrier block’, its original purpose was, indeed, to protect Brixton from the proposed South Cross Route motorway proposed to run through the centre of town. With the road unbuilt the building was squatted in before it was even open and the unwelcoming façade soon proved a hotspot for crime and drugs.

A grimly fascinating building that doesn’t appear to have received the same adoration of other estates in South London, although it is now safer and cleaner - helped by one block now being split into three, with new lifts installed between. But the main building still casts an imposing shadow and the new entrances and external stairways somewhat resemble Stasi watchtowers, albeit with jaunty flashes of red on the roofs and railings. 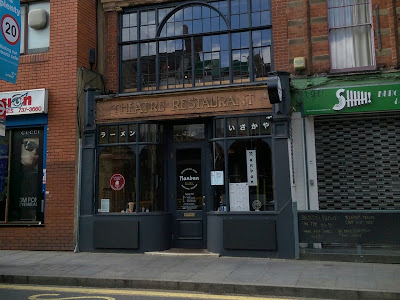 After a bit of aimless and happy wandering about around the market followed by an animated conversation with an interesting character on Coldharbour Lane about the merits of, well I'm still not really sure quite what of, I walked up the road for an early solo dinner at Nanban. 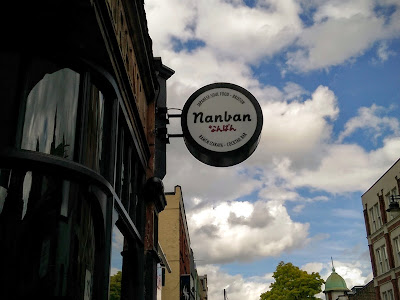 If you're a fan of Masterchef you may remember an experimental chef from a few years back who came from the American midwest via Tokyo who won with a menu that included cheddar cheesecake with whiskey jelly. That man was Tim Anderson who, after marrying an English woman and settling in the Big Smoke, has finally opened his own restaurant. 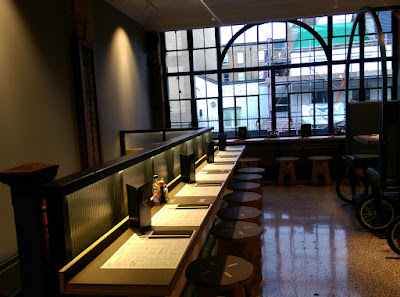 Inspired by 'Japanese soul food', Nanban is housed in an old eel and pie house, hence the electric eel dish (also a nod to Brixton's famous Ave), served deep fried with ginger vinegar and found on the small plates menu. Also expect to see other east/west mashups such as burgers topped with pork belly and korean gochujang paste and spaghetti with mentaiko (spicy cured cod's roe), pancetta and a poached egg. 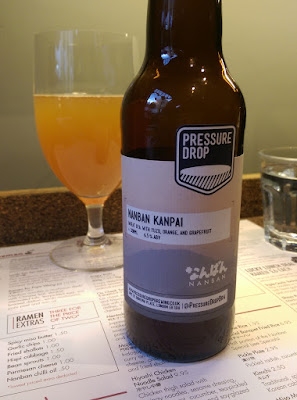 Beer is bespoke, with the restaurant collaborating with Pressure Drop to produce Nanban Kampai – a wheat and citrus infused IPA. Served a touch too warm, this was a juicy and citrussy beer that  really benefited from the creamy/banana notes bought by the wheat (not normally one of my favourite styles). Complex, and a bigger hitter at 6.5% ABV, it stood up well to the spice, although you might have trouble yourself if you drank a few. 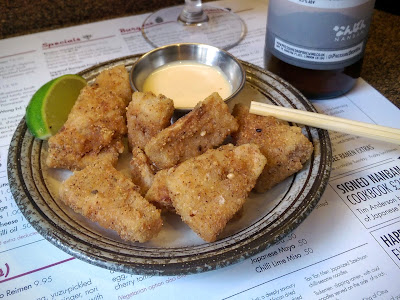 The KFJ (karaage fried jackfruit) was one of the most interesting dishes I’ve had for a while. The under ripe fruit, when coated in seasoned flour and deep fried, has a taste and texture that is confusingly close to chicken. When I Googled it afterwards it has already been (predictably) touted as a new ‘superfood’, and I even found a bbq’d ‘pulled jackfruit’ recipe on the Guardian for massive eco hipster points. The yuzu mayo alongside was also rather lovely, the smooth richness cut though by the hybrid citrus tang. 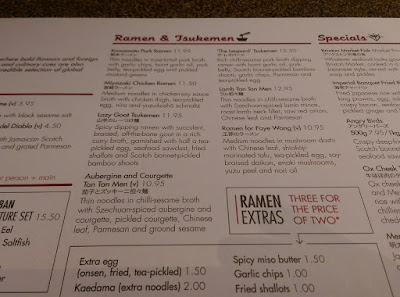 When I was in Tokyo, I was fortunate enough to get to Fuungi– which, even though it was only ten minutes’ walk from our hotel, took an intent amount of studying Google maps to find, not helped by also walking there in the tail of a hurricane. There the tsukune, or dipping, noodle is king. Bowls of rich and creamy anchovy and pork broth, adorned with nothing but half a boiled egg, are served alongside separate bowls of plain steamed ramen noodles for dunking and slurping. 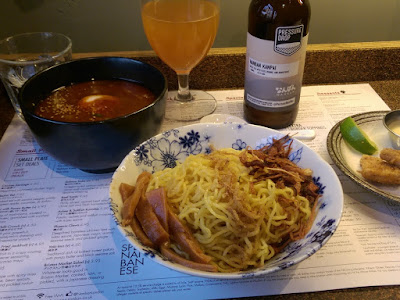 Nanban offers two versions; the Leopard, a deep piggy broth whose surface is ‘spotted’ with garlic oil  and served with noodles topped with garlic chips, crispy shallots and parmesan cheese; and a Brixton inspired version with curry goat, scotch bonnet and pickled bamboo shoots. Being in SW9, I chose the latter and was rewarded with a bowl of rich and spicy meat curry, with half a gooey ‘onsen’ egg (untried, but with a beguilingly bright yolk) and a dish of springy ramen topped with crispy shallots and aforementioned shoots. 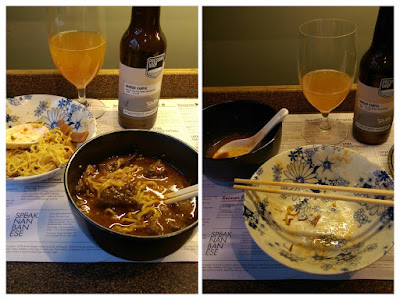 If I was being fussy, I preferred the bigger and bouncier boiled Japanese noodles to the tightly oiled curls of Nanban’s ramen, although the pickled shoots were inspired and the goat curry, while not being G.O.A.T, had a punchy (boom) depth that I’m sure even Ali would have appreciated.

The biggest issue is that it’s an enormously inelegant dish to eat. My chopstick skills are fairly decent (I even received compliments from an elderly couple in Kyoto, who obviously had very low expectations of my table manners) but, despite having the Poirot-esque napkin down the front of my shirt and head bowed I still ended up looking rather like a leopard myself at the end of dinner. 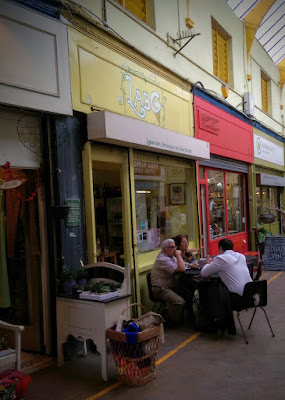 Nanban does offer ice cream – the surprisingly ‘vanilla’, vanilla flavour, served with grilled bananas and crispy fried noodles – but, in an ongoing bid to end all my blog posts this summer with an iced dessert, I headed to the market to sample some of the much lauded gelato from Lab G in Granville Arcade. 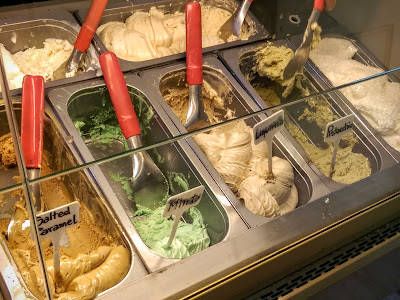 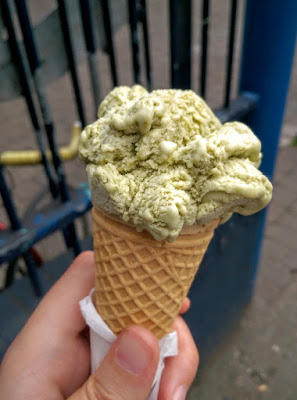 From the outside it may look a little faded and nondescript, and inside there’s only a modest selection of traditional flavours, but my scoop of pistachio may have been the finest I have ever eaten. I could reel off all the clichéd superlatives –smooth, sweet, creamy, nutty – but just know it was as good as anything I’ve eaten in Italy, and the same price as a Whippy. 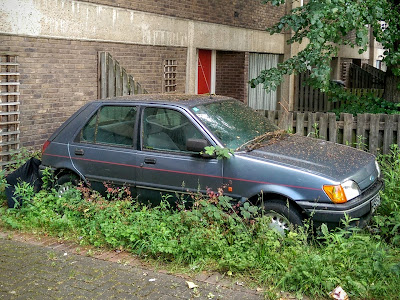 It isn't all different down in SW9 since my halcyon days of hanging around South London; walking back home after dinner I saw this magnificent mk3 Ford Fiesta, which, in red, was also my very first car. And, just like back the 90s, I still drive a red Ford now - this one is named Archie after Steve Archibald the red-haired Spurs winger - proving most things never really change (and yeah, I'm still a terrible driver, too...).
Posted by Amy at 22:44