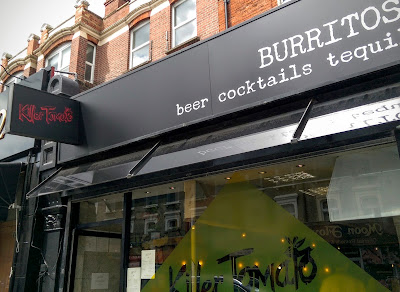 A day out looking at the Czech and Slovak Embassies and municipal town halls may not sound like most people's idea of fun, and my wife is no different. But when she discovered there was a soft launch at new Mexican restaurant, Killer Tomato, plus Brewdog's were releasing their live keg beer, the Ewing was much more amiable about schlepping all the way out to Shepherd Bush on a Sunday. 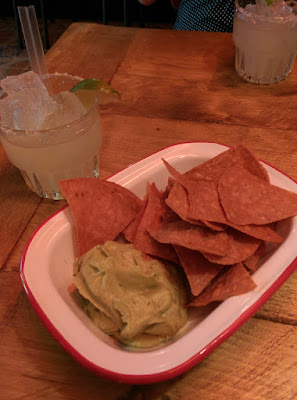 As much as I love them and need precious little encouragement to sit on my sofa eating them, it’s still pretty hard to get too excited about chips and dip. That said, it’s not cricket to start a Mexican meal without them and the one's served at Killer Tomato are the real deal; thick, a little oily, crisp and salty – just like the ones we were served at El Faralito, with a spicy salsa that made the Ewing bare her gums like a rabid chipmunk after eating it (not my finest hour - TE).

This time they were served with an impossibly smooth guacamole, flecked with fresh herbs and bright with lime and garlic, and served in a deceptively indecent portion. Alongside were Tommy's margaritas, nicely made with tequila, mezcal and the requisite salty rim 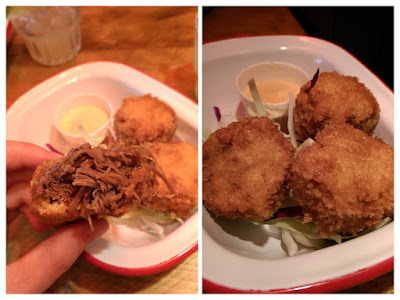 The brisket – a notoriously hard meat to get right - balls appeared as a trio of unremarkable-looking bread crumbed pucks but, as with the chips before, appearances can be deceptive. Packed inside each crisp carapace was a huge hunk of cow’s shoulder, the meat slow cooked and shredded to a soft, juicy tangle. The mayo alongside was also noteworthy, packing the promised spicy punch.

In fact, I liked it so much I used the bed of shredded cabbage the balls were served on to make a kind of deconstructed slaw, lest any were to go to waste – even more impressive/unappealing for my wife, due to the lack of cutlery. 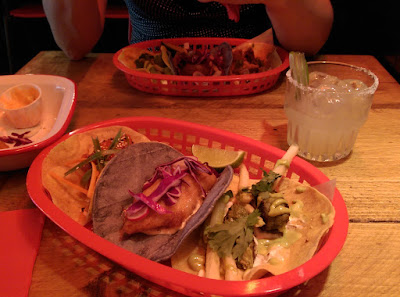 From the taco selection the sticky chicken (served with the same poky mayo as the brisket balls) was good, as was the beer battered fish and crunchy slaw – served on a funky purple corn tortilla. The flavours of 'green chorizo with chips' were more unusual with the soft sausage filling - spiked with plenty of coriander and onion before being chargrilled - reminding me of the shami kebab that’s served at my local curry house. 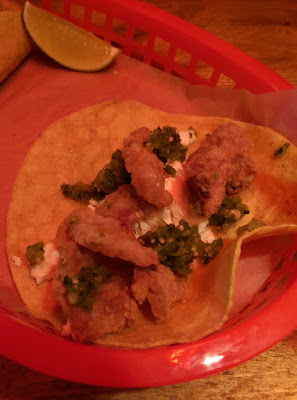 The special taco, chosen by the Ewing, was a chicken skin crackling with feta and chopped green chillies. I have recently discovered the joy of making crispy chicken crackling at home, usually covered in Slap Yo Mama Creole seasoning and eaten, alongside a cold beer, straight out the oven. Of all the tacos we tried, I think this was my favourite. The perfect balance of crunchy, creamy and chilli spice and giving me inspiration when I concoct my next late night drinking snack. 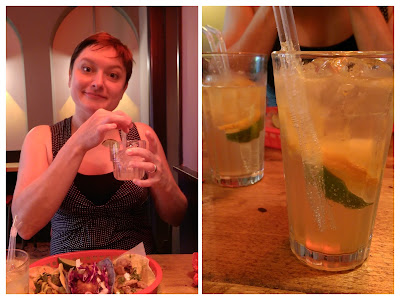 There’s plenty to like at Killer Tomato (beyond the generous soft launch, featuring 50% off both food and drink); bold flavours, interesting ingredients and lovely staff (but not my hand or wild eyes - TE). Portions are decent, but I’d probably need a little more ballast after a few of their drinks, especially as our second cocktail - the summer cup with tequila, Argentinian 'champagne', agave and lime was particularly lethal.

That said, the hungry (or drunk) also have the pick of bigger options on the menu with (rice-less) burritos (including pork belly and crackling), cheeseburger tacos, crayfish tostadas and weekday lunch deals with drinks and fries for a tenner. There's also a wicked looking ice-cream drowned sandwich for desert. Two of my favourite things on one plate. 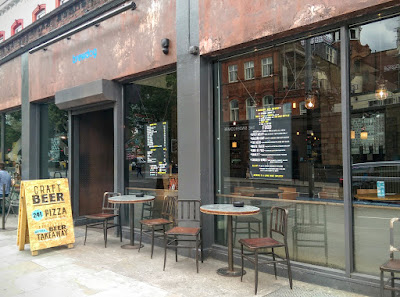 To maintain inebriation levels we crossed the street to BrewDog (not far to skip and only moving vehicles to dodge - TE), to try their new interpretation of cask ale. After giving up cask a long time ago as, in their opinion 'more than half the cask ales served in the UK are substandard in terms of beer quality. We also felt the beers we were making at the time all suited keg dispense better and that cask ale was best suited to lower ABV session beers'.

Understandable if you are supplying to other outlets maybe, but doesn't show a great deal of faith in your own bars if you think they can't serve their own BrewDog beers on cask properly.... 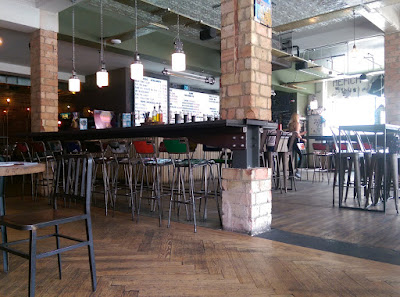 Despite this stance against cask (one shared by many other breweries recently) a quest began, helped by writer Pete Brown, towards creating what eventually became LIVE beer. A beer that would behave with the consistency of keg but have the character of cask and would produce a perfect pint every time.

In Brewdog's words 'LIVE beer is craft ale, conditioned in a key keg, Fermented without top pressure, then lightly centrifuged to remove hop debris the beer is packaged and allowed to ferment and condition inside the keg and is served on draft at 9.5°C through a sparkler... gently sparkling and 100% awesome'. The usual hyperbolic swagger we expect from the Scottish brewers, but does it match all the fuss? 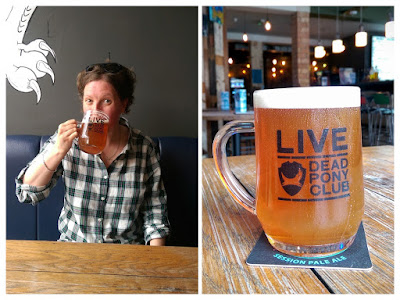 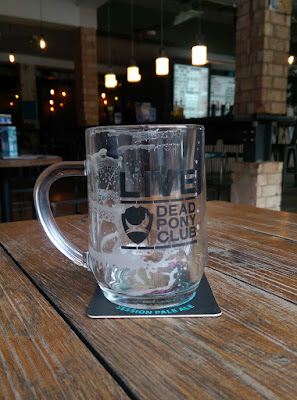 For me Dead Pony Club - the only beer that's currently been given the LIVE treatment - is a pretty solid session pale ale anyway, so it's hard to say this new twist added much. Serving it through the sparkler aerates the beer, giving a nice tight head and some body to the beer, but mutes it's hoppiness. Overall a refreshing, if not standout, pint which, as it's served slightly colder than cellar temp of 'normal' cask, is well suited to this weather. 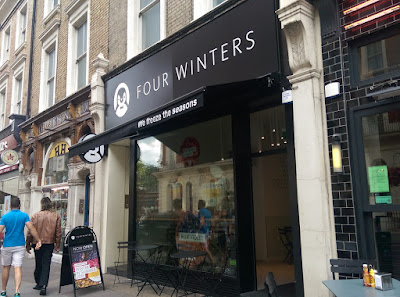 When I was last in Australia my sister told the Ewing and I about the Coldstone Creamery, an ice cream parlour where deserts are customised with different 'mix ins' on a block of frozen granite, and where she and her friends had spent their gap year gorging on their icy creations. Now, I’ve eaten lots of ice cream pretty much all over the world, but suddenly visiting their Manly branch in the north of the city became a quest of almost mythical proportions. 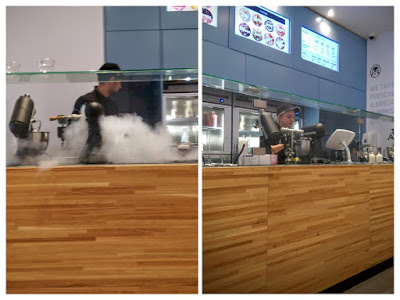 After taking the ferry across the bay and stumbling around in the heat trying to find it (in the pre-smart phone days, and of course having no map and no idea…) eventually we asked a kindly chap, who seemed greatly amused to hear about our mission and helped direct us there.

Of course, the ice cream couldn’t live up to the expectations, but I think that’s somehow the point with these things, the thrill of the chase. And while Four Winters, our next stop, didn’t quite have the excitement of our Manly mission, the ice cream here - created by adding dry ice to the liquid ice cream base – is even more dramatic. 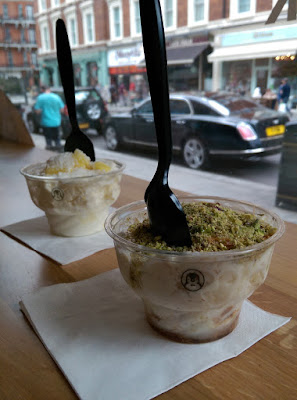 They had run out of waffle cones, a disappointment for Ewing and a rookie mistake for an ice cream parlour, but the tubs – a seasonal pina colada for my wife and kunefe for me – were still pretty good without. (I thought it was quite an icy concoction which had lost the lovely creaminess of real ice cream, but that's just my opinion of course - TE). I particularly liked the my choice, based on the Middle Eastern sweetmeat where layers of pastry are stuffed with fresh white cheese, topped with pistachios and soaked in fragrant syrup.

Here, the freshly whipped vanilla ice cream base is mixed with crispy strands of syrup soaked noodles and sprinkled with fresh pistachios. While it may have been better with a cheesy centre, what wouldn't, it was an interesting combination of textures and flavours that made a nice change from chocolate or strawberry 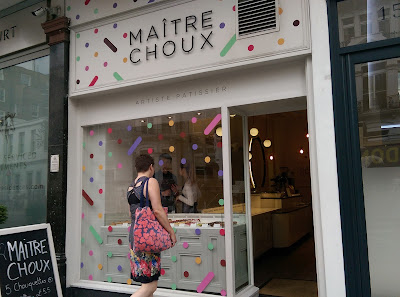 As a reward for patiently poking around student halls and army barracks with me all afternoon, I took the Ewing to get a bun for her trunk, or more accurately a upmarket desert from Maitre Choux, French pâtissier  Joakim Prat's exclusive eclair shop in South Kensington. 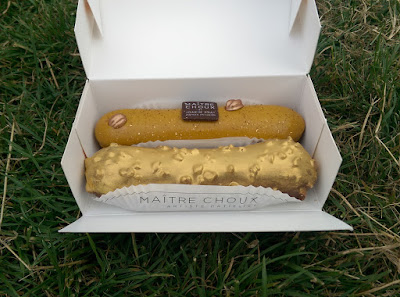 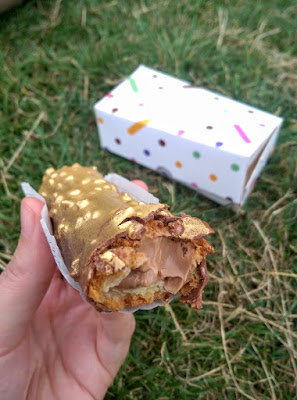 The Ewing chose the  Pure Arabica Coffee, a glazed choux bun stuffed with coffee flavoured creme patissiere that has both added butter for texture and whipped cream for lightness. No surprises that it was pretty good, the coffee bringing bitter edge to the pillowy, sweet pastry.

As we are currently experiencing an Olympic medal rush in Rio how could I resist the hazelnut and milk chocolate treasure, an eclair that 'has it all'; filled with hazelnut praline and chocolate creme patissiere then coated in chopped hazelnuts and more chocolate and finished with gold dust. Gilding the lily has never tasted so delicious. Now, if chasing concrete and eating and drinking were Olympic sports....