It would be pretty hard not to notice that over the last few weeks Twitter has been awash with salivating steak lovers, happily enjoying the soft opening at the new Guildhall branch of Hawksmoor.  I wasn't originally planning to blog about my lunchtime visit with the Ewing; it's been written about many times before, and mostly far better. But as my blogging brethren know, it can be pretty hard not to take pictures of at least a couple of forkfuls of food, especially when it's as magnificent as the grub we were served on Monday.  So, as the snaps came out pretty well considering the subterranean setting, in the name of steak porn here's a few brief thoughts and pictures. 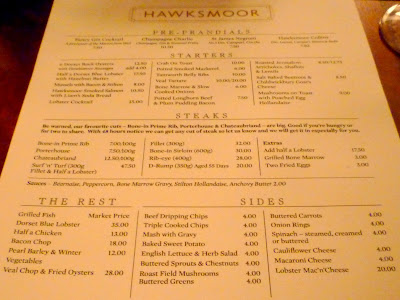 The layout and feel is pretty similar to the Seven Dials branch, a staircase leading underground into the bar area, and then through to the dining room.  Although it's a large space it still manages to retain a 'clubby' steakhouse vibe, with circular booths for large parties on one side of the room and intimate banquettes for smaller groups on the other.   With the rich smell of new leather and charcoal in the air, we were feeling pretty excited as we were shown to our seats. 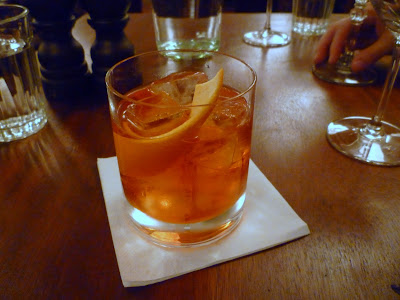 There is something extremely pleasing about the rattle of ice cubes in lowball glass, and even more so when it's also filled with Rich Hunt's Sinking Spritz.  A pre-prandial cocktail featuring Sauvignon Blanc, Aperol, elderflower, Cartron No. 7 and Picon Club. This was a fantastic aperitif with a gentle bitterness to help hone your appetite. 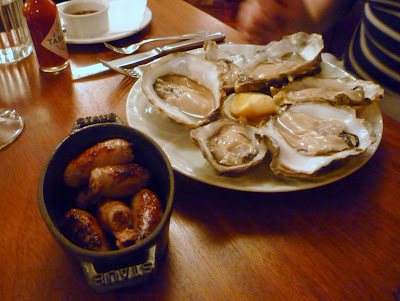 The Ewing's oysters were served with a mini casserole of Hawksmoor sausages.  Briny mollusc and meaty nugget, designed to be eaten in one mouthful.  Individually the Ewing declared the rocks some of the sweetest she had eaten, while the sausages were porkily perfect.  Together this surf and turf cleverly popped in the mouth with a perfect balance sweet, salt, hot and cold. 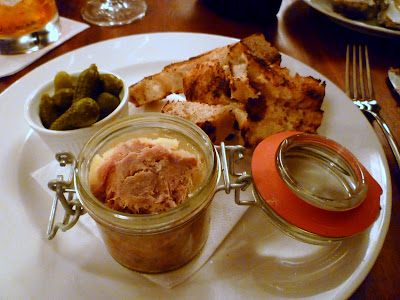 The potted beef and plum pudding bacon.  A truly wonderful dish; rich shreds of smoky meat served with  thick slices of chargrilled bread and piquant pickles.  Although this is a pretty robust start to a meal I had no problem polishing the whole lot off and could have happily eaten plenty more. 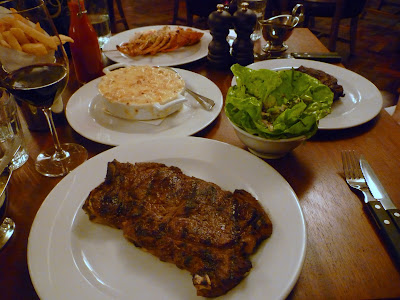 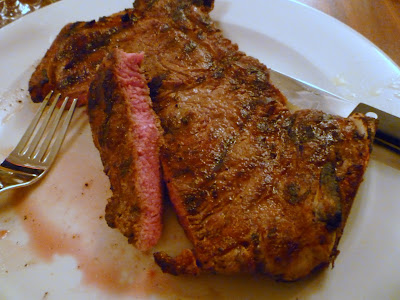 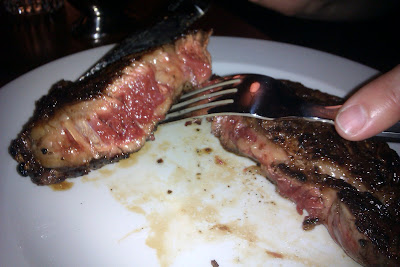 The money shots:  600g Bone in sirloin and 400g rib eye, both medium rare.  I initially requested my sirloin rare, but our lovely waitress advised larger cuts, especially on the bone, would benefit from a little longer of the charcoal grill.  This lead to it being served a shade darker on the pantone chart than I would have ordinarily liked, but full of flavour and perfectly rested, this was still a stunning hunk of meat.

The Ewing's Rib eye was beyond superlatives; perfectly pink within and deeply charred on the outside.  With all the rich marbling the meat almost pulled apart.  In fact this was about the quietest I've ever seen her as red in tooth and claw she chomped steadily through her plate of protein, only stopping occasionally to push my advancing fork away. 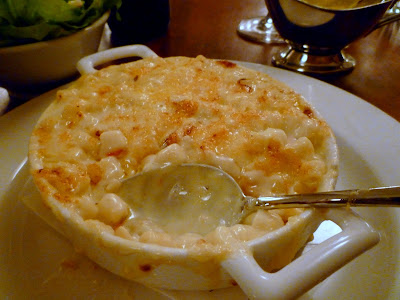 Just in case we were in danger of going hungry we also stocked up on  the sauces and sides.  Lobster mac'n'cheese is ambitiously priced at £20, but for that you get a whole half lobster swimming in a huge dish of bubbling cheesy pasta.  The delicate meat managed to admirably stand up to the robust flavours, and if there was any way to improve the original Hawksmoor macaroni this could be it. 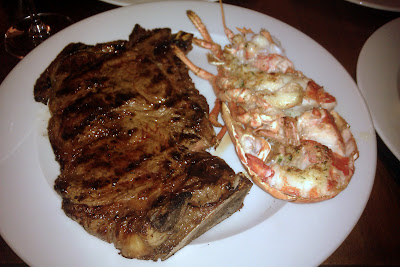 We also chose a grilled half Dorset Blue lobster (lovely and sweet and served with a garlic and hazelnut butter), triple cooked chips, a very nice English lettuce and herb salad (got to eat your greens), bone marrow gravy and Stilton hollandaise.  Their hollandaise is a toatal triumph; the little salty nuggets Stilton mirror the slight 'cheesiness' in the aged meat.  Truly a marriage made in heaven and as fine a sauce as I have ever enjoyed. 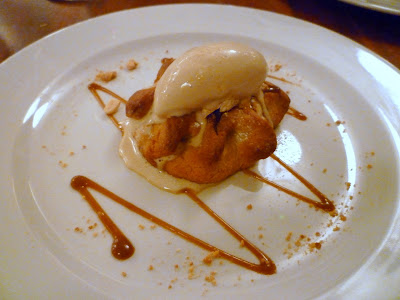 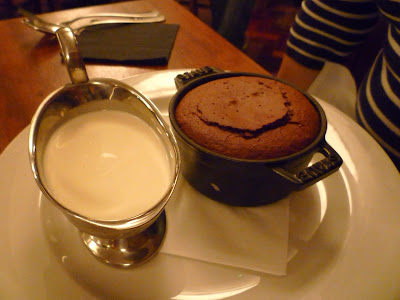 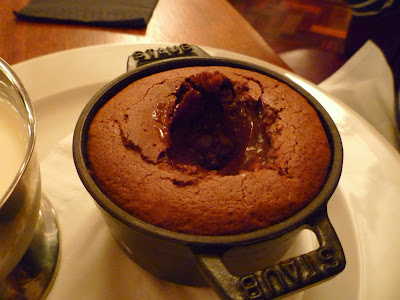 By this point simply breathing was becoming a chore, but the Ewing and the waitress had conspired together and I found that pudding had been ordered 'on my behalf''.  From the two staff suggestions I had the peanut butter shortbread with caramel ice cream and Ewing the chocolate rum pudding with pouring cream.

The shortbread was a delight.  The inside was generously filled with peanuts and warm chocolate, while the salty/bittersweet ice cream topped it off nicely.  The Ewing's pud was a chocoholic's dream.  Although the rum flavour wasn't too prominent the centre was perfectly molten and the only thing that could improve it was sploshing half the jug of cold, thick cream into the middle.  Joy.

So, if there was any doubt after reading the superlatives above, a first class lunch.  In fact so lovely, and boozy, that I felt thankful to not have to return to the office and instead staggered home for a post prandial snooze.  Good meat isn't cheap, (even with the generous 50% off soft opening) but with great beef, great booze and that hollandaise the latest Hawksmoor is yet again raising the steaks. (Apologies, but there had to be at least one terrible meat pun....)