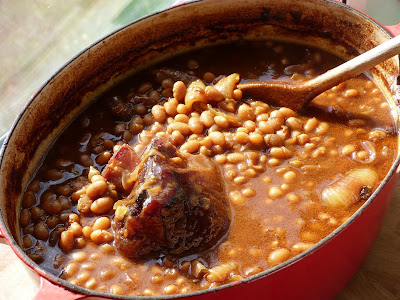 To my mind there is little better to warm frozen fingers and toes after an evening huddled round the bonfire than a steaming bowlful of spicy, smoky ham and beans.  Not only is it a porky, pulse-laden joy to eat, it is also very easy to make and economical too.  The perfect wintery dish to stick on the back of the stove to quietly bubble away while you get on with other things.  Covered in the fridge it should last for four or five days (not that it ever lasts that long in our house), making it perfect to reheat for a quick  midweek lunch or supper. 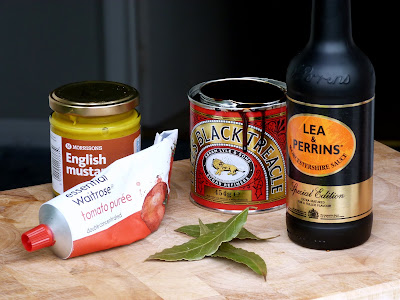 This dish is based on the Boston Baked Beans from Hugh Fearnely-Whittingstall's Meat book.  It's a clever and frugal  recipe as it features the humble haricot bean as the star of the show, with the meat in a supporting role providing extra richness and depth.

The original 'Beantown' version would have featured salt pork and molasses; here I have used the, very similar, black treacle and the end bone of a Parma ham,  picked up cheaply at my local Italian deli. The cured meat adds a rich salty/sweetness, but Hugh's recipe uses uncured pork belly, so I guess the choice is yours.  If you do use cured/salt bacon or pork then check before seasoning, as it will be much saltier than if you use green bacon or uncured pork. 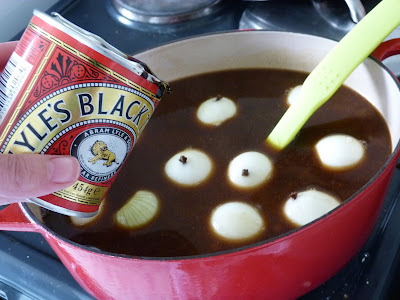 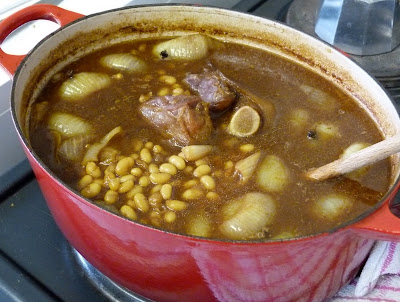 Soak the haricot beans overnight in cold water.
Drain and rinse beans, place in an ovenproof casserole, cover with fresh water and bring to the boil.  Boil hard for 10-15 minutes, than reduce heat and simmer for about an hour, until the beans are soft.
Pre-heat oven to 140c.
Stir sugar, treacle, mustard, tomato puree and Worcester sauce into beans. Stud the cloves into the onions and add along with the ham bone/pork/bacon, bay leaves and pepper.
Place lid on casserole and bake the beans in the oven for 2-3 hours.  Stir mixture, check for seasoning and then return to the oven, unlidded, for another hour until the sauce has thickened.
If using a ham bone, remove, shred the meat and return to the beans.

As well as being fab on its own, with crusty bread or piled atop a buttery baked potato, it also makes a good breakfast addition. Serve it as part of a full-on full English, or as a pimped up version of beans on toast. 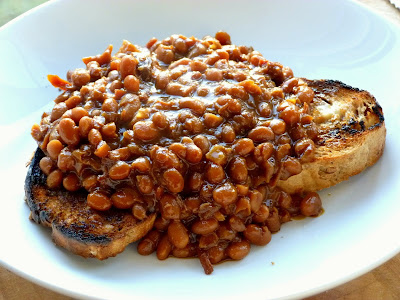 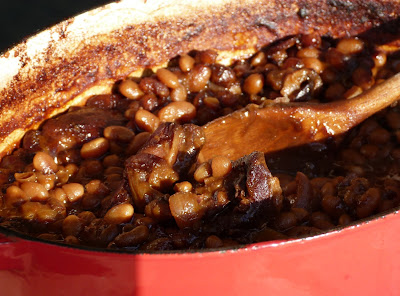