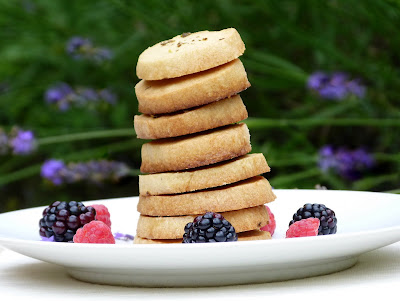 When I moved into this house at the beginning of last year I was very excited to see a big rosemary bush next to the patio. I joyfully picked handfuls of the herb and flung them in stews and casseroles, even stuffing huge amounts of stems, along with some garlic and anchovies, into a leg of lamb for Easter lunch.

It was only as I was showing my Dad around the garden in the early summer that we noticed the 'rosemary' bush had grown blue flowers, was attracting bees and smelt like more like my Gran's Yardley perfume than a useful culinary ingredient. Hmm... No matter,  I found out lavender is no longer just for grannies and is making quite a comeback; it's even recommended as the integral seasoning in this lamb dish, making my Easter creation seem less weird. (although large amounts of Rioja meant everyone was either too polite to say, or too drunk to notice) 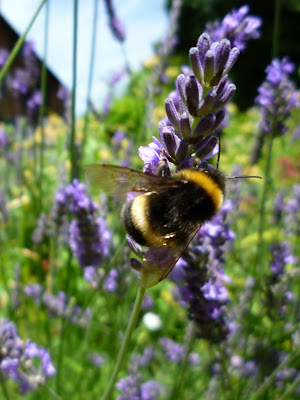 This recipe is adapted from the Food Lovers Britain website.  I added some fennel seeds to give it a extra edge;  pairing the lavender and anise flavours that form part of a traditional herbs de Provence.  It would be good with a little bit of vanilla extract, stirred into the dough with the wet ingredients, too.  The biscuits contain quite a bit of butter, which makes them very rich and crumbly, much like shortbread.  The original recipe suggested rolling the mixture thinly and cutting out the biscuits, but I found it easier to roll the dough into a log, chill it and then cut slices from it.

150g butter plus extra for greasing

Preheat the oven to 160C/325F/gas mark 3. Grease three baking trays.
Cream the butter and sugar together in a bowl until light and fluffy. Sift in the flour, add the egg yolk, and half the fennel and lavender and mix well with a knife. Turn the mixture out on to a lightly floured surface and knead until smooth.
Roll the dough into log shape, wrap in cling film an chill for 30 minutes.
Unwrap the dough, cut slices about 1/2 cm thick and place on the baking trays.
Scatter over the the rest of lavender flowers an fennel seeds and lightly press them in with a rolling pin.  Bake for about 15-18 minutes until firm an lightly golden.
Cool on the trays for about 5 minutes, then remove on to wire cooling trays.
Decorate with a few fresh lavender leaves.
Posted by Amy at 19:34