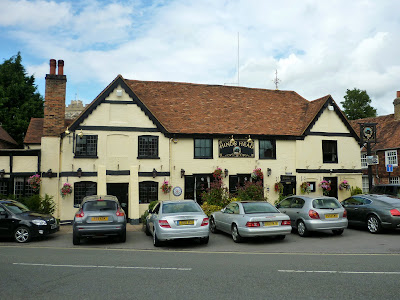 After our trip to visit friends down on the South Coast fell through at the last minute it was time for a back up plan.  Despite living within striking distance of Bray, and all of it's fabulous food, I had never visited.  With the late date, and shallow pockets, The Fat Duck and The Waterside Inn were out the window, but I managed to get a table for lunch on Saturday at the Hind's Head, Heston's Tudor pub in the middle of the village. 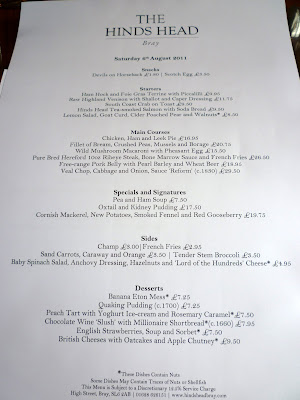 After arriving a little early we enjoyed a nice pint of the Rebellion Brewery's Mutiny ale, and a browse through the weekend papers, in the cosy front bar.  We were then lead to a spacious corner table in the light and airy upstairs dining room, a perfect spot for a warm summer's afternoon. 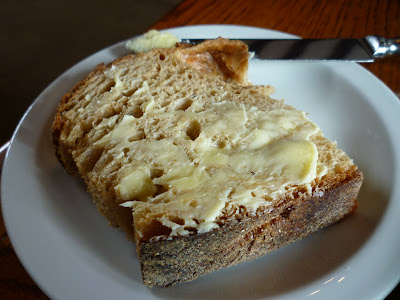 After initially turning down the offer of a bread basket we soon reconsidered as hunger slowly began to bite while waiting for our starters to arrive.  It was lovely stuff; chewy, dark and dense with a crispy crust. 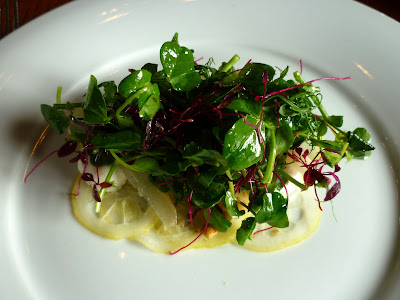 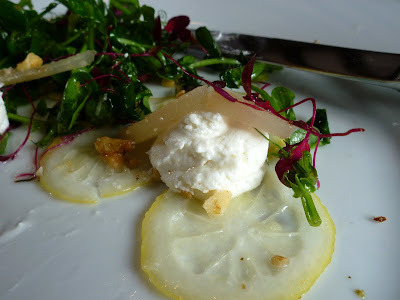 When the first course eventually came it was hard not to feel slightly panicked.  Even though it was pretty as a picture, and I had just eaten half a loaf, I wasn't sure a little pile of micro leaves was going to cut it.  Luckily some digging underneath revealed some lovely fresh goat curd, sweet slices of pear and some, perfectly balanced between bitter and sour, lemon slices.  The lemon complimented the light, citrus notes of the cheese and hazelnuts provided a nice crunch to round things off. 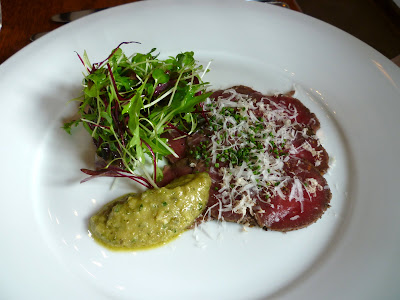 The Ewing went for the raw Highland venison (my original first choice, but my irrational fear of both ordering the same thing meant a late change of mind).  The meat was fantastically sweet and soft; the shallot and caper dressing a sharp and tangy counterpoint. 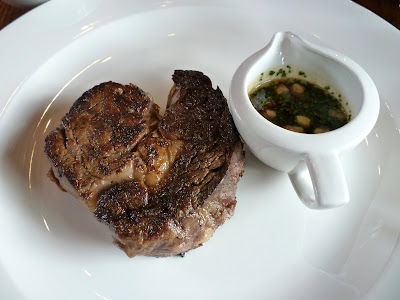 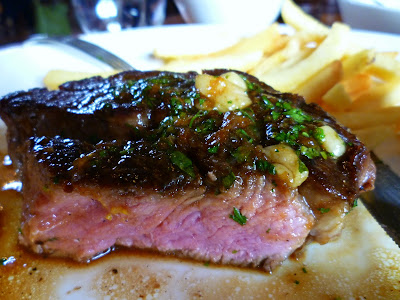 I had spent most of Friday at work debating whether to go for a burger or a steak, but on receiving a copy of the day's menu found the burger had been jettisoned.  After briefly considering the veal chop and the pork belly I decided to stick with beef and plumped for the rib eye.

10oz of pure bred Hereford beef, cooked rare and served with a jug of bone marrow sauce and a bowl of crispy French fries.  The outside of the steak had been beautifully charred, and was cooked enough to melt the marbled fat throughout the meat, while still keeping it nicely pink.  The sauce was marvellously rich and glossy, with sweet little nuggets of marrow happily bobbing about; a day later and I'm still wistfully thinking about it's lovely unctuousness. 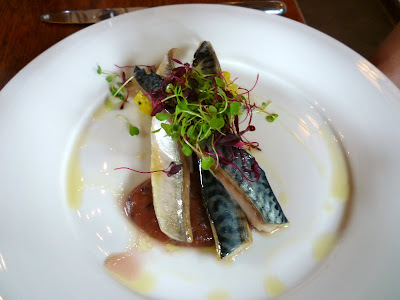 The Ewing chose the rather more refined mackerel with smoked fennel, new potatoes and red gooseberry sauce.  Summery lovliness; the tart gooseberry contrasting with the oily fish.  The fennel  was particularly good, crisp anise flavour with a subtle, smoky undertone. 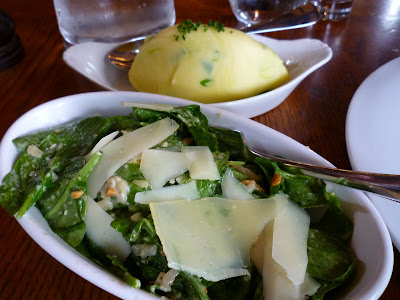 Sides were excellent. A spinach salad with smoked anchovy, hazelnuts and Lord of the Hundreds cheese was a bit like an English Cesar, and extremely moreish.

A side of champ came unbidden (forgot to check if it was on the bill), but once it arrive we decided we might as well eat it anyway...  A brilliantly smooth, buttery potato puree with the lovely bite of spring onion throughout. 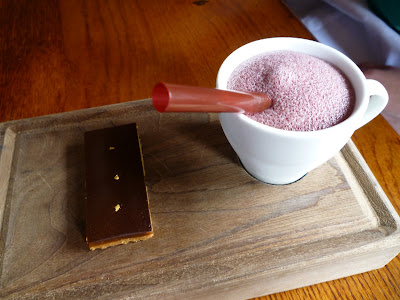 After initial concerns I was going to need an early dinner due to the dainty portions I found myself in the unusual position of barely having the strength to look at the desert menu.  Even more worryingly the Ewing was feeling the same.  Luckily we pulled ourselves together long enough to order the 'Chololate Wine Slush with Millionaire Shortbread' (c.1660) and two spoons.

Despite the Ewing claiming she could easily of eaten half a dozen of the shortbread (having seen her raid the biscuit tin I don't doubt this to be quite true), I found the balance between the rich frozen wine and chocolate mixture, and the salty caramel crunch to be just right.

So overall a rather lovely, relaxed lunch in very civilised surroundings.  Service was very friendly and unobtrusive, even if if did seem to take an age for any food to appear, but once we did finally see some grub it was well worth the wait.  Bonus point too for huge jugs of iced tap water that kept appearing, much to the Ewing's delight.

And while not too cheap, at a hundred pounds all in, with three courses, sides, service and a pint each it still seemed fair value.  And to put a price on that glorious bone marrow sauce...
﻿