After my Spring foraging success with the wild garlic I was extremely excited when the Ewing informed me that our neighbour (with a botany degree no less) had told her that the blue plant with the bees swarming around it was borage.  Hooray!  I suddenly had thoughts of sipping pitchers of Pimm's with its traditional flowery garnish, and bowls of fancy salad strewn with the cucumber scented leaves.
Back in the real world I had to go and collect my bounty first.  After donning my washing up gloves (they are pretty bristly) and long sleeves to protect me from being stung by the bees, (this stuff has real animal magnetism) I set off on my expedition to the bottom of the garden.  Returning with my spoils I decided wilt the leaves like spinach and make some gnocchi with it to serve with rainbow trout fillets.
Despite having never made gnocchi before they were a breeze to knock together, and good fun to make too.  I baked the potatoes, rather than boiling them, to ensure the dough wasn't too wet, and stirred in a couple of egg yolks, the borage and enough flour to make a firmish dough.  (Use less flour and the lighter the gnocchi will be, but it also increases the chance of them falling apart while cooking.) Retrospectively I may have made these a little smaller, but they held their shape very well after cooking while still retaining enough of that delicious pillow-like texture.
The trout was baked with a little local honey, lemon and pepper in about the same time it took to boil the gnocchi and then finish them off in a frying pan with a little hot butter. Strewn with a few of the brilliant blue flowers this looked pretty as a picture, and tasted pretty good too.  I'm not sure the borage flavour was too pronounced in the dumplings, but there was definitely a subtle cucumber note that paired with the fish very nicely. 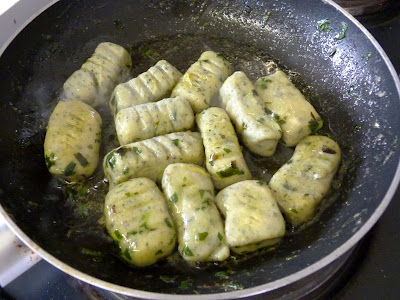 Honey Roasted Trout with Borage Gnocchi
3 large potatoes
1 egg plus 1 yolk
Flour to bind the dough
Large handful of borage or spinach leaves
Semolina or extra flour for dusting
2 Trout fillets, pin boned
2 Tsps Honey
1 Tsps butter
Black Pepper and salt to taste
Wash borage leaves then sweat in a dry pan until the leaves are soft all the moisture has evaporated.
Bake the potatoes in 180c oven until soft, cool for five minutes then cut in half and push flesh through a sieve or potato ricer. (don't add any butter or milk)
Add the egg, egg yolk and borage to the mixture and knead gently.
Slowly add the flour until the mixture is bound together but not too stiff.
Divide mixture to three and shape into long sausage shapes.
Cut mixture into gnocchi sized lumps then press a fork into the middle of each piece.
Place on a baking sheet sprinkled with cornflour or flour and cover with a damp tea towel until needed.
Dot a teaspoon of butter on each piece of trout and drizzle with honey.
Season trout generously with pepper, salt and place in a 180c oven for 10-12 minutes
While fish is in the oven cook the gnocchi in boiling water for 2-3 minutes, until they float to the top of the pan.
Heat some butter in a pan and add drained gnocchi.  Fry until they begin to turn golden.
Place the gnocchi in a bowl and lay a trout fillet on top.
Finish with any juices from the fish and decorate with borage flowers.
The gnocchi are better made just before you need  them, although any left over dumplings can be successfully frozen. Just place them straight in boiling water from the freezer and cook for an extra minute or so. 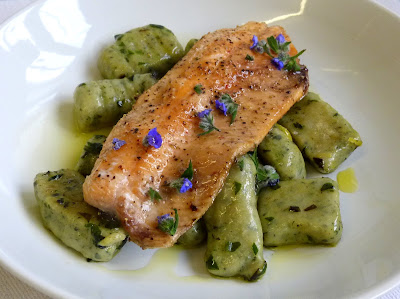