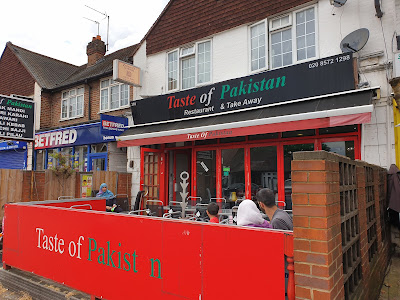 In the modern world you don’t have to get someone to bare their soul to really understand what makes them tick, just look at their Instagram feed. It may seem obvious – an algorithm of things based on things you like and people you follow – but I can genuinely say I was absolutely fascinated the first time I noticed my friend scrolling through her suggestions and finding it was a list entirely populated by pugs and reality stars in bikinis.

Clearly my feed is far more prosaic; mostly featuring pictures of murky pints and a proliferation of carbs, but we do have my browsing history to thank for alerting me to the existence of the giant naan bread served at Taste of Pakistan. 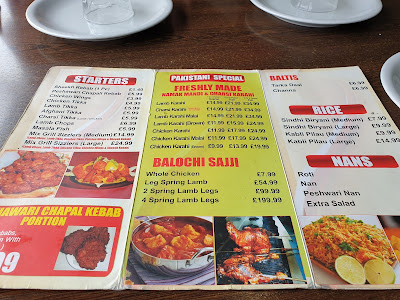 Obviously I made it my priority to hunt it down and try it, although this wasn't going to be my first experience with the kind of naan that resembles a satellite dish. That award goes to the famous Akbars in Leeds, on a visit to see my aunt and uncle. Which is probably too far, even for me to suggest, to travel for a curry.

That said, Taste of Pakistan is in an unlovable corner of Hounslow which, on a Sunday afternoon sitting on the M25, felt as if it took nearly as long to drive there as some of our trips up to West Yorkshire. 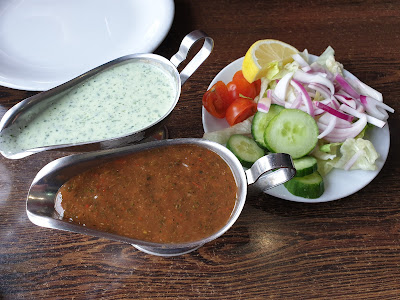 Ever eager, we were the first to arrive - the closed sign was still hanging in the window as we rocked up, giving me momentary concern lunch was off -  but within about fifteen minutes of us being the first to sit down, nearly every table was full of Pakistani and Afghani families all ready to, literally, break bread. 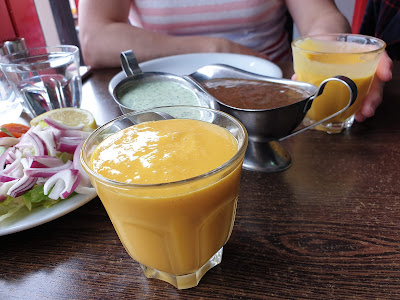 First up, to keep the Ewing amused, came a plate of fresh salad and two silver jugs containing a spicy fruit chutney and a benign-looking, but also spicy, yogurt sauce. To drink, we ordered a jug of excellent mango lassi, which was even better than the version I had enjoyed the week before at Thattukuda. 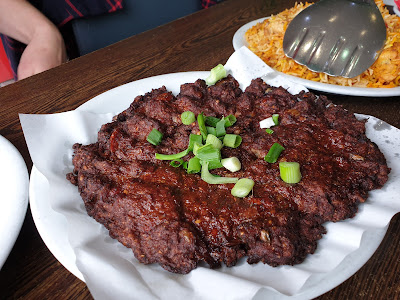 Even more exciting than the prospect of the giant naan was the chapli kebab. Originating from the Peshawar region of North West Pakistan, it’s a flat patty of ground meat, usually beef or lamb, mixed with various other ingredients including onions, tomatoes, chillies, and herbs and spices. Traditionally they are deep fried in lamb fat, but vegetable fat may be used in some vague pretence of being healthy, and are served hot with chutneys and raita with rice or in a ‘bun kebab’, which is pretty much a burger by any other name. 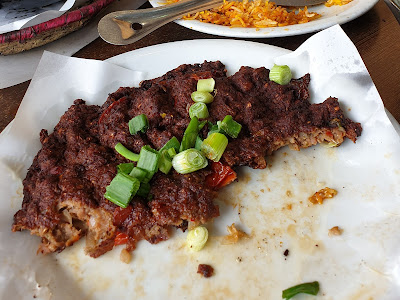 While the city of Peshawar alone boasts over 2,000 kebab houses that serve the chapli kebab, it’s a rare beast here, often being overlooked for the better-known seekh and shami. Which is a shame, as the Taste of Pakistan version - a hefty, crisp-edged, well-seasoned disc of tender meat -  is an awesome thing. (oh yeah, I would definitely order this over the others if I had the choice - TE). 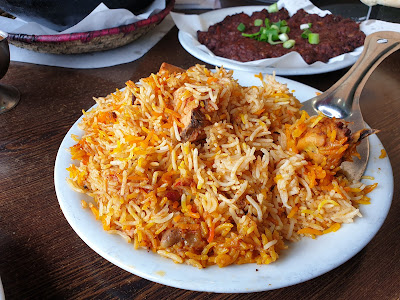 Sindhi biryani - originating from Sindh, one of the four provinces of Pakistan - managed to pack hugely complex layers of flavour into what appeared a simple dish. Glowing with the deep orange hue of saffron and studded with spices and chunks of meat, it made me reevaluate my usual indifference to rice dishes from the Indian Subcontinent (who would ever pick a pilau over a peshwari naan?).

Wikipedia reliably informs me that it's a dish served on nearly all Pakistan International Airlines flights, which I'm sure would be a huge improvement on the 'english breakfast' BA served to me recently. (anything would be an improvement on that - TE). The chicken karahi was the sleeper hit. A unprepossessing-looking dish – named after the metal pot it’s cooked and served in, cooked here over fierce flames that you can see in the open kitchen at the back of the restaurant  – this was one of the best things I have eaten in a long while. Even the Ewing, notoriously fussy when it comes to a chicken curry, declared this top draw and was thankful the molten hot dish made it difficult to access from my side of the table. 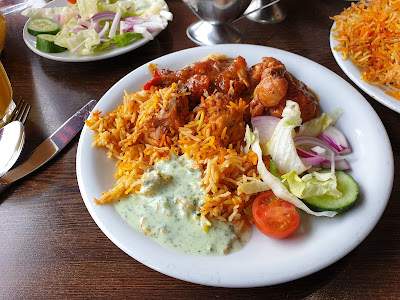 Wikipedia informs me the difference between a North Indian and a Pakistani karahi is the absence of green peppers and onion in the latter. Which can only be a good thing as there are no good uses for a green pepper, although this did contain delicious roundels of green/yellow chilli alongside the chunks of chicken. Buyer beware, there were some splintery bits to negotiate, but serving the meat on the bone kept it juicy and tender, contra to many chicken curries, full of lumps of tasteless cotton wool-esque protein. 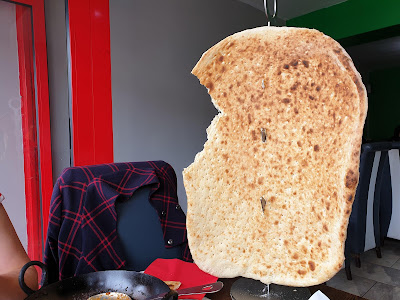 And finally to the pièce de résistance, the duvet-sized naan - I certainly needed a lie down after eating it - served piping hot straight from the tandoor; theatrically impaled on a huge metal spike.

I have to be honest and say I don't remember Akbar's effort, to compare them - it was doubtless after an all day pub crawl around Leeds - but this light and fluffy effort was leagues ahead of some of the big breads I have eaten in the Balti Triangle, that more resembled giant Jacobs Cream Crackers. 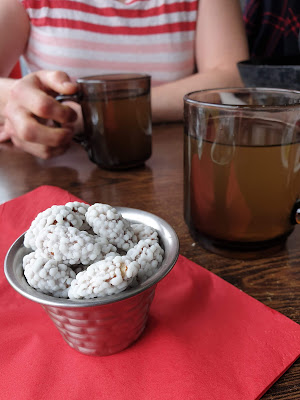 I was too full to try their homemade kheer, but they kindly brought us complimentary Afghan tea - flavoured with green cardamom - and a dish of sugared almonds. Which, honestly, weren't really my cup of tea, but the Ewing enjoyed them and it made a nice way to ease the digestion before the long drive home. At least the journey back gave me plenty of scrolling time on Instagram to find the next carb-filled culinary adventure.
Posted by Amy at 22:17