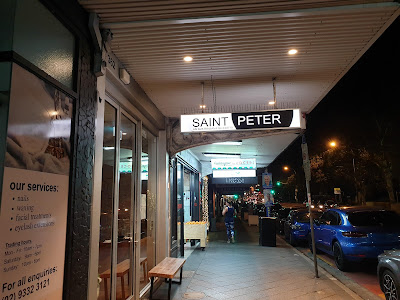 The first time I celebrated the Ewing's birthday with her we went to visit Stealth in London; she had pulled out all the stops - preparing a lovely meal and buying gifts and even planning a special magic show featuring the Ewing to act as her glamorous assistant. Or that was the idea, until we realised my wife hated being the centre of attention and was so overwhelmed with shyness, she couldn't even pick a card. Something that neither of us two showoffs had ever had a problem with.

Fast forward a decade and you would think I would have got the message. But clearly not, as on arriving at Saint Peter for the Ewing's surprise dinner, the maître d' came over to give us the wine list and have a chat - mostly with the Ewing, as I'm not very sociable - before casually announcing; 'so I hear it's someone's birthday'...(and I'm meant to be the one with the shit memory...TE) 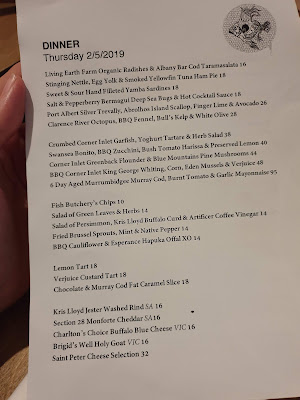 At this point my ears pricked up, as the Ewing, wide-eyed looking very much like a rabbit in the headlights, mumbled an affirmative, while staring at me intently across the table. I inwardly groaned, as I remembered writing 'can you stick a candle in my wife's pudding, as it's her birthday' in the comments box on ResDiary, somehow thinking this was a great idea. And I was sober at the time. 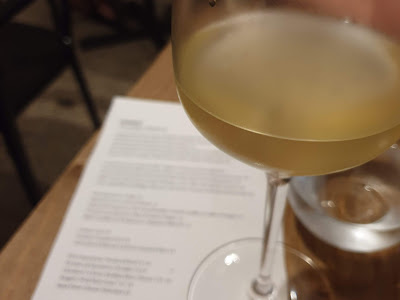 Which is more than I can say for either of us when we arrived at Saint Peter, where chef Josh Niland showcases Australian sustainably sourced seafood. Voted both chef and restaurant of the year by Timeout and chef of the Year by Gourmet Traveller, and on the World Restaurant Awards short list for ethical thinking, I knew the Ewing would love it. At least I was hoping she would, right after she had stop glaring at me and kicking me under the table.

Luckily my wine choice, the 2018 Chardonnay Savagnin, made by the ancestral (pet nat) method, using the original grape sugars and yeast, was a big hit. Crisp and dry, with a touch of fizz and bags of crisp apple and lemon, it was a real celebratory wine that edged me back into the good books. 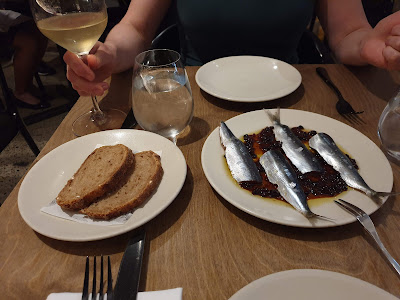 The arrival of the food also helped, with a plate of beautifully iridescent sweet and sour hand filleted Yamba sardines making the perfect start to the meal. With more than a nod to a classic Venetian dish, sardine in saor, the spankingly fresh raw fish were served on a perfectly balanced bed of sauce that included slow cooked shallots, vinegar and tiny sweet currants. I could have happily eaten a shoal of these, accompanied by crusty bread to mop up every last drop of sauce. 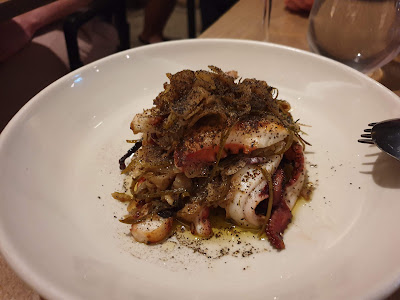 Clarence river octopus with barbecue fennel, bulls kelp and white olive was a big, beefy dish where tender tentacles went toe to toe with the powerful seaweed and the slightly bitter note of the veg. I heartily embrace any opportunity to eat the cephalopod, and here was no different, although not for the faint-hearted. 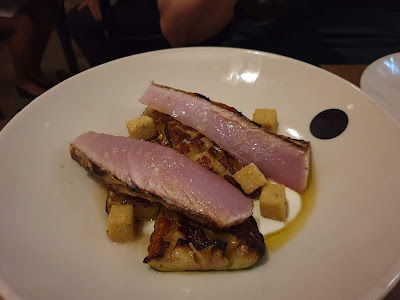 Swansea bonito, bbq zucchini, bush tomato harissa and preserved lemon paired thick fillets of the tuna-like fish, chargrilled on the outside and almost raw within, with smoky veg and cubes of (I think) potato. A surprisingly delicate dish that carefully balanced all the bold flavours. Although, not known for my love of subtlety, I did find myself missing the zing of the advertised lemon and tomato against the fatty fish. 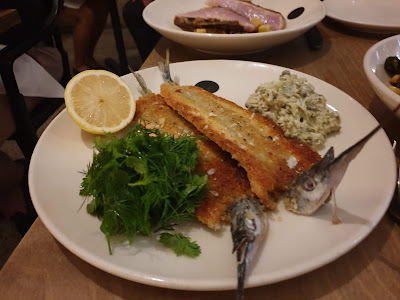 The crumbed corner inlet garfish, butterflied and fried with the heads and tails still intact, certainly looked the part. The richness from the golden carapace was perfectly offset by the tangy yoghurt tartare, a good squeeze of lemon and the thicket of fresh herbs including flat leaf parsley and dill.

Garfish have green bones, due to the presence of the same bile pigment that gives bruises their verdant hue, and while the colour didn't bother me, I did find eating them made me feel irrationally like the Queen Mother. Although I think I was probably suffering from fish fatigue from eating too much at that point. 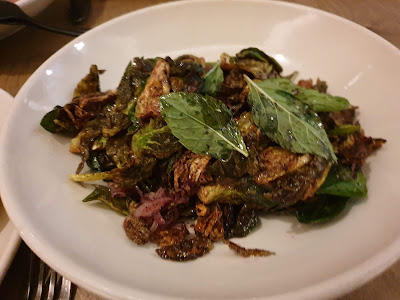 While I had been uncharacteristically laid back about the rest of the ordering, I did pretty much insist on the fried brussels sprouts with fresh mint and native pepper as a side dish.

The Ewing isn't really a sprout lover (I know, I'm not sure why I've stayed with her so long either), and this didn't do too much to change her mind. I however, was a big fan and, despite being dangerously stuffed at this point, found it very hard to resist the bowlful of crispy, charred veg that had been doused in plenty of vinegar before serving; another of my favourite favours. 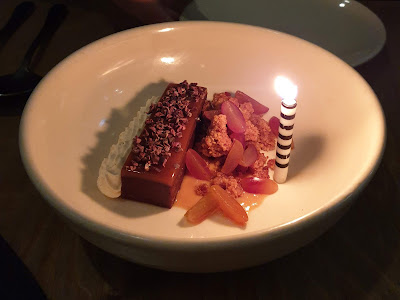 And what about the birthday girl? After 'persuading' her to order pudding - there wasn't much doubt that she would - we decided to share the chocolate and Murray cod fat caramel slice, with burnt vanilla soured cream, grapes and macadamia sauce, replete with candle.

This was a divisive dish, not so much for the caramel element but for the shortbread crumbs served alongside, which our waitress told us hapuka Roe, making them taste strangely - and not all that appealingly - fishy. Thankfully the birthday girl enthused about it so much that she even managed to persuade her new friends on the table adjacent to us (having tired of talking to me) to order it. 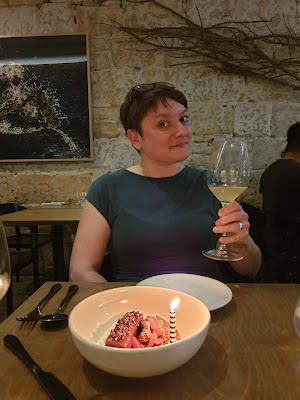 Happy birthday to the Ewing. Here's to the next decade of celebrating with my favourite.
Posted by Amy at 21:35