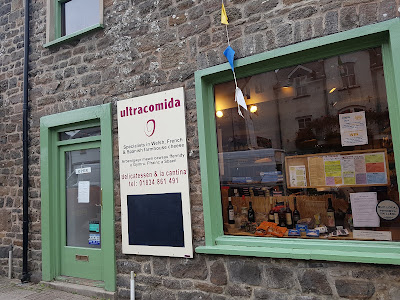 While writing this blog I've frequently flip-flopped on many food related issues. My favourite cheese; my favourite roast; my favourite curry; my favourite sandwich - currently Roquefort; rib of beef; lamb dhansak (with peshwari naan and a bhindi bhaji) and bacon with butter on white bread - but my devotion to lunch, my very favourite meal of the day, hasn't wavered.

Not just any lunch, of course. Most of my lunches, like most of us, are extremely ordinary (excuse me? ordinary? - TE). Consumed hunched over my key board, trying not too get too many crumbs wedged in my space bar. Which is what makes a 'proper' lunch so very wonderful. The kind when you start early with an aperitif and a nibble or two, before segueing seamlessly into the evening on a crest of food and booze and good conversation. 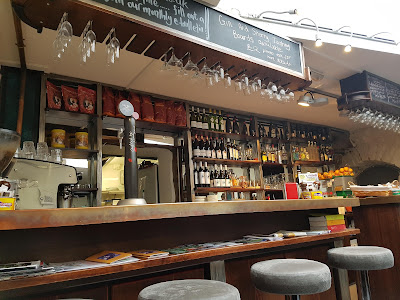 Which is why I was particularly looking forward to our lunch at Ultracomida in Narberth - a deli-cum-tapas bar deep in the heart of rural Pembrokeshire. A whole day with nothing much to do except eating and drinking and poking our noses into charity shops and butchers and bakers and staring at community notice boards and estate agent's windows. The Ewing even found West Wales first zero waste store and spend a happy half an hour buying strange herbal infusions and hippy soap (a shampoo bar actually which has been a real success - TE). Getting old can be truly brilliant sometimes. 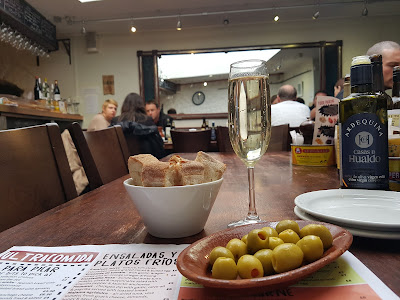 All Tuesdays should kick off with a cold glass of cava and gratis dishes of stuffed olives and fresh bread. Even better if the olives are the salty green kind I used to love as a kid, stuffed with a strip of red pepper paste you can tease out with your tongue.

The Ewing also had much fun trying different blends of oil and vinegar, from the various bottles found on the large sharing tables that dominate the light and airy room where the restaurant is housed - get here early for lunch, queues were already building at half twelve. The best combo being judged as a mix of organic Spanish olive oil with a balsamic style PX sherry vinegar. 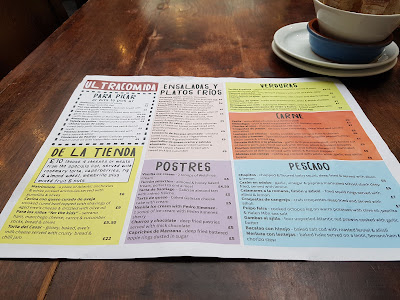 For such a small space the menu is surprisingly comprehensive, starting with a range of breakfasts - including the classic pan con tomate and huevos rotos, or 'broken eggs', served with fried potatoes  - before moving on to a wide range of fish, veg and meat tapas that are available all day, plus a range of toasted sandwiches that are served at lunchtime.

You can also order platters made up of a selection of the various cheeses and cured meats that they also sell in the shop, or just order drinks and nibbles or coffee with a slice of cake or a pastry. I'm not sure how Spanish rocky road or carrot cake are, but they seemed very popular. 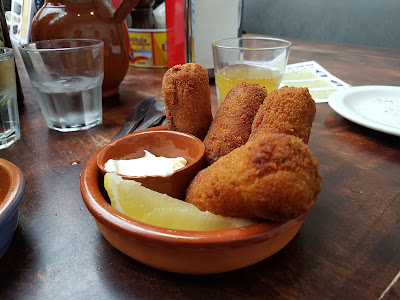 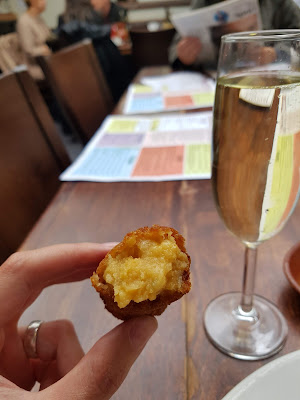 Initially I was pretty against the crab croquettes; I mean, I love a croquette, but I had already spotted the peerless jamon version on the menu and I doubted these could be any improvement.

So the Ewing pouted, and I relented and I was (this seldomly happens) happy to be proved wrong. The croquettes were utterly joyful; a delicate shell of golden breadcrumbs encasing a hefty nugget of crab-flecked bechamel, fried until the outside was crisp and the inside all gooey and melty. 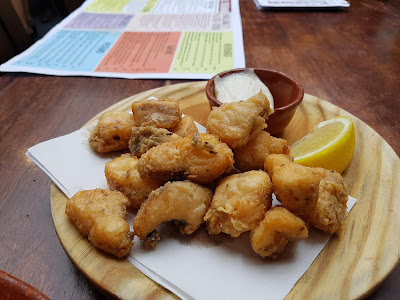 They had both chopitos (baby squid) and calamari (squid rings) on the menu on our visit. Which, as a squid lover, showed admirable attention to detail. Tempted though I was, it was even harder to resist the cazon en adobo; school shark marinaded in garlic, vinegar and paprika, before being floured and deep fried.

These were the most glorious, and generously portioned, springy nuggets of fish. Arriving fresh from the fryer they were scoffed with an indecent haste - with only the briefest pause to sweep them through the wobbly aioli that left me with the ability to repel Dracula for days after our visit. 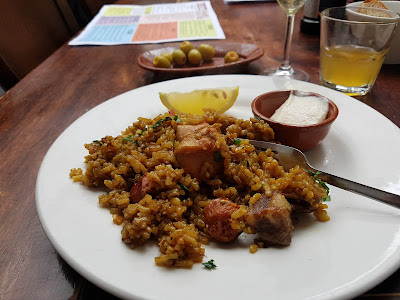 I also ordered the paella - which I had pre-warned the Ewing I wasn't going to share, under any circumstances - to quench a raging craving for I had had for weeks. Not only is seeing paella on a menu still a rare find, it usually necessitates two people minimum, plus an interminable wait while it's cooked. Here they prepare a batch each morning, ready for the lunchtime service, so it's ready to go when you order and there is no minimum portion size.

This was a paella Valenciana, named for the city where the dish originated, made here with roasted peppers, rabbit, chorizo and iberico pork. While I do love seafood in my rice, an unfortunate incident with Stealth, the opened wine and the unopened mussels did put me off for a while and I actually think I prefer the classic land-based version. This version was simple lovely and perfectly itched the scratch. 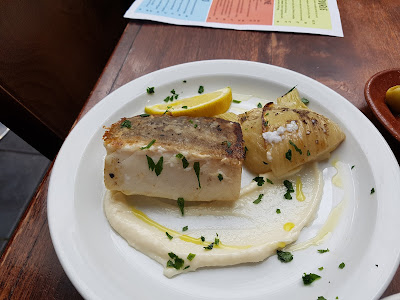 The Ewing, on hearing that I wasn't planning to share my rice (bar the odd forkful, I'm not a complete monster) chose the bacalao con hinojo, salt cod with roasted artichoke, lemon and more of that fearsome aioli.

This was a superb dish and I was suitably jealous - a thick tranche of fish, with burnished skin and flesh that broke into pearly white flakes that possessed the lovely gelatinous quality that come from being cured with salt before being cooked. And an utter bargain at eight quid. Throw in a couple of spuds and it would go for twice that in many restaurants. 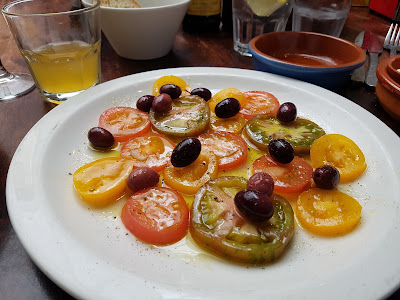 The only real duff note was the heirloom tomato salad, with a generous topping of inky purple olives,ordered to bump up our veg quotient. There wasn't anything wrong with it, just that it seemed very 'meh' in comparison to the other dishes and the toms weren't a patch on those grown by the Ewing this year (awww...thanks babe - TE). 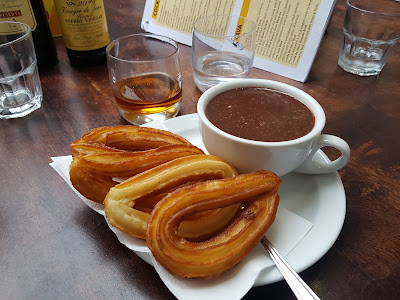 Chocolate con churros feel like the kind of thing you should order when you're propping up a bar on holiday in Spain, only to presented with disappointment and regret when the bowl of tepid dishwater and greasy, cold dough sticks arrive.

Here they were everything they always promise to be; hot puffy twists of crisp batter served alongside a cup of gooey, thick chocolate for dunking. As if that wasn't enough, we also had glasses of Orujo, a strong pomace brandy, and Ponche Caballero - a brandy with added oranges, plums, sultanas, cinnamon. 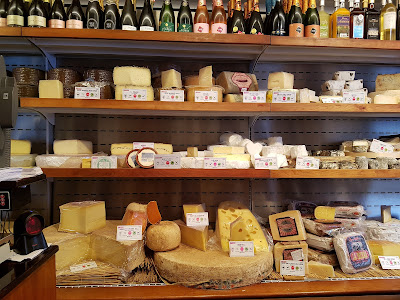 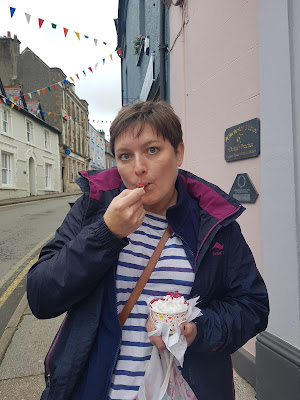 After the inevitable detour on the way out to buy cheese (a palate-stripping blue and a manchego wrapped in rosemary) and vermouth, our postprandial stroll took us to a second pudding stop at the gelato and gin shop, Fire and Ice. Whilst I picked a restrained (and exceptional) frozen yoghurt with blackcurrant a ripple, the Ewing went full out with Gethin's cider sorbet and a gin and tonic sorbet with orange.

The only downside was, after enjoying such a joyful day of half-cut gluttony, it had to be followed by worse for wear Wednesday.
Posted by Amy at 21:18