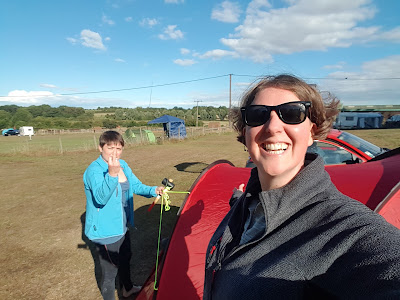 I’m rather fond of camping, in fact a few nights under canvas was the very first trip the Ewing and I went on together. We went about ten miles up the road, it rained pretty much constantly and our air bed had a slow puncture, but that just seemed to make it all the more exciting and romantic. Well, until we came to our final morning and the rabbit with mixamatosis turned up. My wife may laugh thinking back, but I still have nightmares. 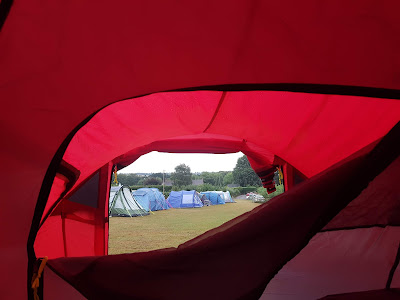 As sure as a circle keeps going round, our most recent trip together was also camping, this time to the Pig Place, an hour up the M40, on the Oxon/Northants border, following a lovely visit a few years back. And yes, it rained, and our mattress developed a puncture. Although now, after a decade together, the drizzle and lying on the lumpy ground had lost its allure somewhat. We have upgraded to a better tent at least, so on this trip we were happy sitting in the porch, waiting for the black clouds to pass so we could light the stove and have a cuppa. 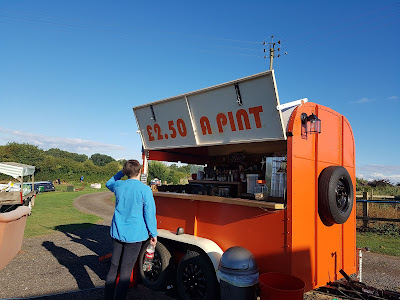 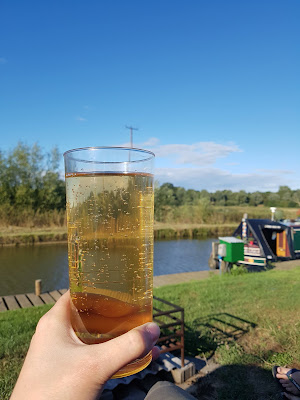 It did start out bright though, so we made the most of the new Trotters Bar, a trailer with glorious views over the Oxford Canal and Cherwell Valley. With Thatcher’s on draft or local cider available by the pint, as well as a large range of gins and other spirits. We enjoyed a cider with blackcurrant (very 90s uni days) and a strong scrumpy, while sinking into a couple of the sofas that are positioned in a great spot on the slope leading down to the water. 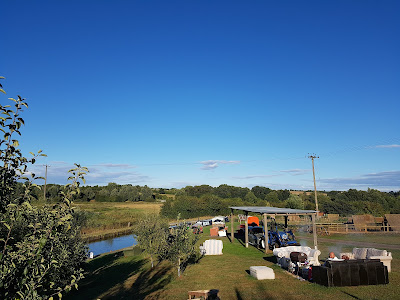 The whole place is pretty idyllic. Set on a smallholding – featuring the eponymous pigs, chickens and runner ducks, the best kind of duck – it’s a beautiful, but back to basics spot.  While there are no showers and the only water is from their own borehole, there is a well-stocked farm shop on site, as well as a trailer kitchen serving freshly prepared food that is open for breakfast, lunch and dinner. 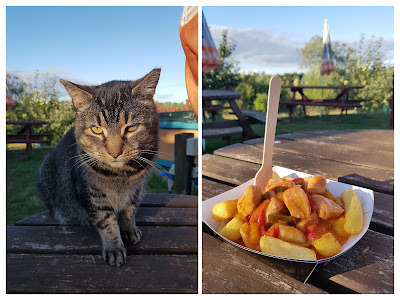 Dinner options included sweet and sour pork or a pork balti (plus a couple of veggie choices) served with chips, rice or a jacket spud. I had the sweet and sour with chips, which was everything I hoped it would be. Lean chunks of loin, from the farm, in a tangy sauce with mixed pepper and pineapple sitting on top of a bed of excellent chips; hot and crispy and fluffy and all tasting even better after a couple of pints of cider. If your're lucky, you might even get a visit from Sid, although there was no way I was sharing. 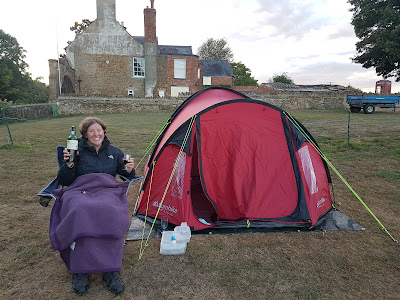 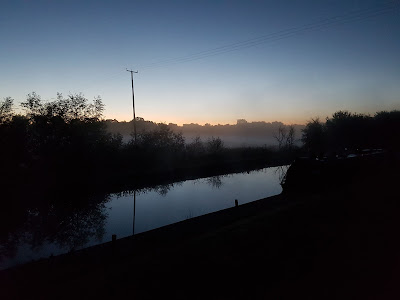 We may have been going back to basics, but we hadn't abandoned civilisation completely. So, of course, a bottle of organic port was an essential nightcap. it may have gone some way to insulating against the cold, but it certainly didn't help with four o'clock moonlit stumbles to the Portaloo, or my head the next morning. I did get to see the sun rising over the canal though, so not all terrible. 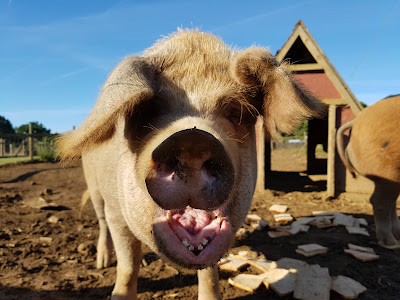 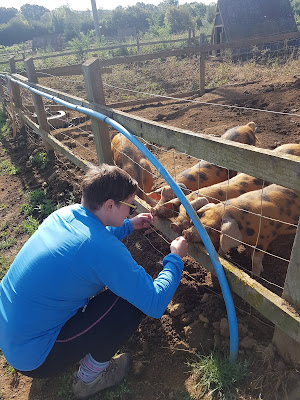 If dinner was good, the brekkie was superb, as good as I remembered, maybe even better. And, even better than that, if you get up early enough (everyone gets up far too early when they're camping) you get to see the farm animals being fed. The sight of the pig losing his shit over a loaf of bread was quite something to behold. I think I've finally found my spirit animal. 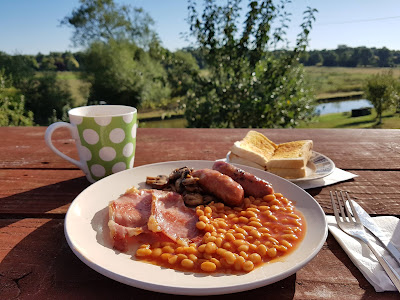 Happily for my wife, I enjoyed my first meal of the day in a more relaxed manner, all while admiring the glorious view across the Oxfordshire countryside.  We both chose the full english and, although I’m not such a committed ouef-avoider now days, I haven’t moved much beyond omelettes and scrambled egg, so the Ewing had my brace. They offer hen or duck eggs (both from the farm) so she had two of each, although I only seemed to get half a slice of toast and a small chunk of sausage in return…

There were also fantastic bacon and sausages (relatives of our new friends) as well as mushrooms, properly hot baked beans (something of a skill in itself) and toast buttered right to the edges. As well as the most gorgeous view through the mini orchard of apple trees and across the canal. 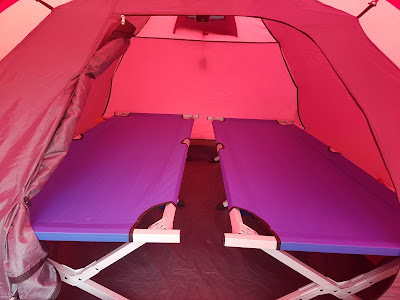 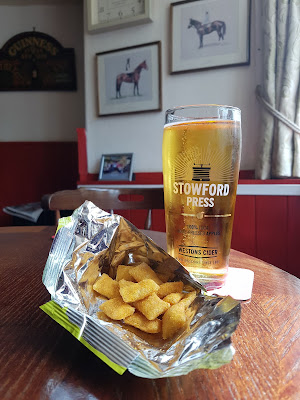 While I hate to shatter the carefully crafted illusion that I'm basically Robinson Crusoe reincarnated - and I could repair the mattress by lashing together a few branches, while simultaneously rubbing a couple of stray twigs to start a fire to cook a spot of lunch I had fished and foraged - I must confess we spent the afternoon at the nearby retail park buying new camp beds, followed by watching the Spurs game at a nearby pub, where I foraged for Scampi Fries and cider instead. 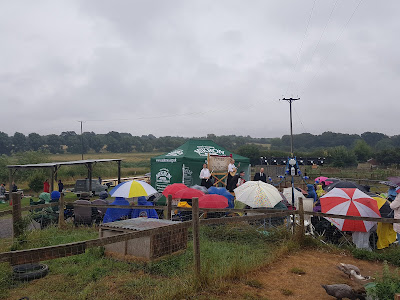 Saturday night at the campsite saw the annual performance by the Mikron Theatre Company - who arrived by narrow boat from Yorkshire – performing Revolting Women, a story commemorating the centenary of the suffragettes. So of course, for the first time all weekend, it hammered down. In honour of their visit there was a barbecue with wild boar hot dogs and pulled pork rolls. Unfortunately I don’t have any evidence, but the Ewing retreated to eat her dinner in the car, which probably tells you all you need to know about the mood in camp…. 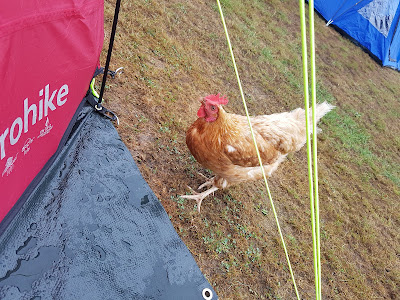 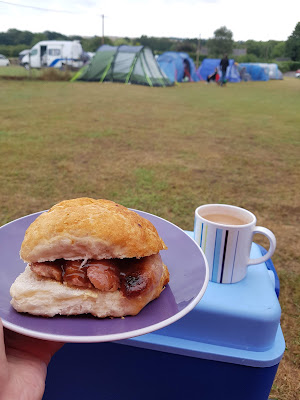 Thankfully a couple of beers plus a very restful night on our new camp beds meant we could greet the, slightly grey but still dry, morning with renewed vigour. Especially when it involved  a feathered guest who had come to say hello, plus hot sausage sandwiches with lashings of oxford sauce and several mugs of steaming tea. All hail the electric kettle by the bore hole. 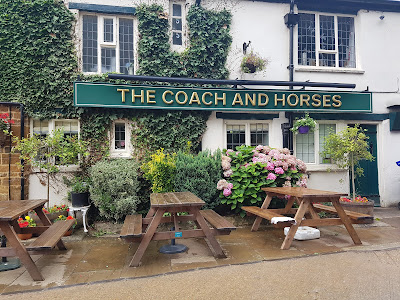 After managing to get the tent down and cram everything back into the boot just as the heaven's opened again, we smugly decamped down the road to the Coach and Horses in Adderbury, to a lovely traditional pub which also boasts what must be the best value Sunday lunch in the whole of Oxfordshire. 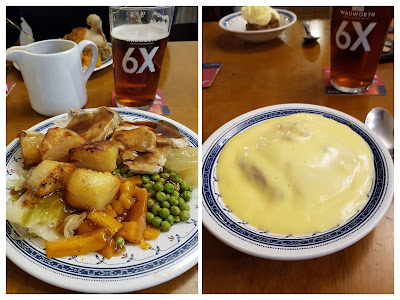 Despite not having a reservation, the landlord very kindly squeezed us in at the bar thanks to a late cancellation. And when our roasts appeared I could see why. Four quid for pork loin, which of course I had to round the weekend off with, or half a roast chicken and stuffing, served with no less than five roasties (and yes, Amy One Potato ate them all) plus boiled veg that tasted reassuringly like being back at my nan’s house again. Only this time we didn’t have to hear the stories about so-and-so over the road; and I didn’t have to do the washing up.

Even better was the fact that they had a pudding menu (two fifty each) that included jam roly poly and custard. One of my very favourite things in life and the perfect antidote (along with another pint of bitter for the non-designated driver) to the persistent drizzle that had (mercifully) started the moment we stuffed the last bit of camping gear in the car. 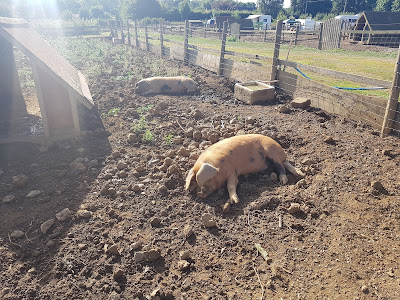 While it maybe in turns too hot, too cold, too wet, too windy. camping is still a great chance to relax, get back to nature and, best of all, have a good giggle. In fact, the Ewing loved it so much she's already bought a new super duper sleeping bag and booked our next trip for the August Bank Holiday. I've packed the port, painkillers and a poncho (bank holiday equals guaranteed rain). What else do you need?
Posted by Amy at 21:55