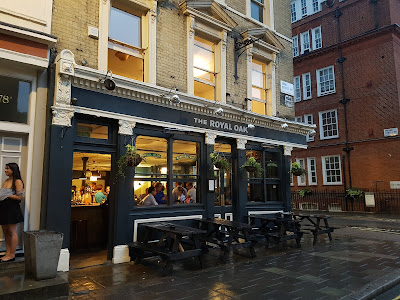 One of my favourite stories to recount on the blog – like that slightly inebriated, repetitive person you hope you don't get stuck with at a party - is from when Stealth was heartbroken and I, being a supportive friend, had arranged to meet up with her. Ostensibly to help her through her dark time, but also because I knew we could go to Tonkotsu for ramen, followed immediately after by a Jose Jose burger at Patty and Bun and, as long as she had a steady supply of beers and the odd gyoza, we would both be perfectly happy. 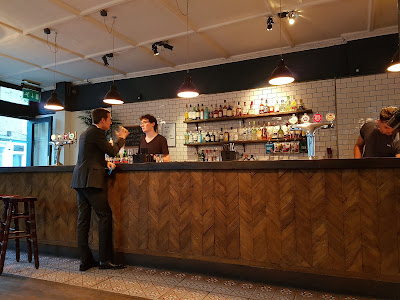 Thankfully, after 25 years of friendship, things still broadly follow the same pattern, although most recently it was me in need of a supportive kick up the arse. Cue a midweek dinner date which happily happened to coincide with Dan Doherty's - formerly of Duck and Waffle but also found sampling amateur cook's roasts and crumbles next to Mary Berry on the Beeb -  new venture, the Royal Oak, five minutes from Marylebone Station. Beer for both of us, slightly drunken ranting potential for me and possibly the hottest scotch egg in Town right now for Stealth. Because I’m nice like that. 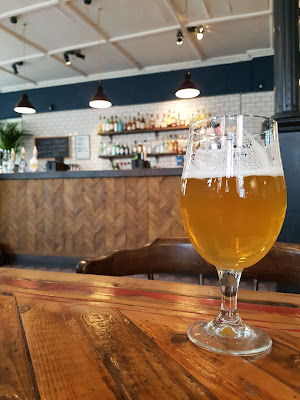 As ever, I was there first, so had ample time to get stuck into a pint of Five Points Pils – The Heatwave, innit - from the well-curated beer list. My entertainment while waiting came from Dan himself being mobbed by adoring fans (not me, as I possess far too much Englishness, and hadn’t had anywhere near enough beer at that point) as he emerged briefly from the kitchen.

Thankfully Stealth wasn’t as late as I feared she’d be, and came sans bike, so there was less reflective garb to remove before she went to the bar. This time for pints of Five Pint XPA, sensibly a slightly lower ABV to lubricate my tales of woe. 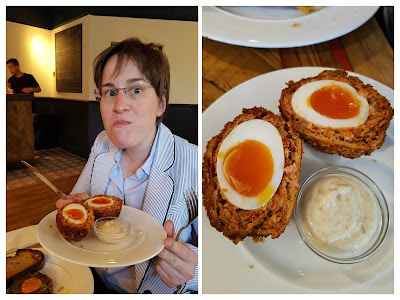 Currently the pub has had the quick once over, in preparation for a proper refurb in the autumn, but any one on Insta recently would probably already have seen some pretty serious pub grub coming out of the tiny kitchen on Dan’s feed (unless you’re my wife, in which case you only see orphaned kittens and wonky vegetables on social media).

As mentioned above, probably the most iconic of these - can it be iconic after a couple of weeks, can something in breadcrumbs ever be iconic? - is the chorizo scotch egg. My feelings on eggs have been documented even wider than my feelings on boozing with Stealth, but she remains a huge fan (of me and the ouef), and seemed, by all accounts from the picture at least, very happy with this. 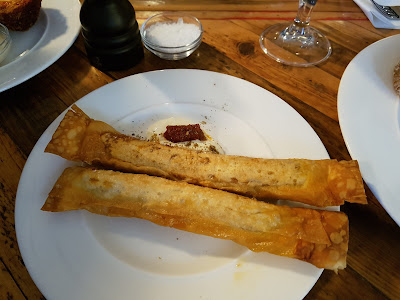 Far more to my taste was their clever reimagining of a sausage roll - not something I would necessarily consider in need of a revamp, but I’m glad they did it anyway - in the form of merguez sausages that had been wrapped in sheets of filo before being deep-fried and served with whipped feta. And at four quid for a brace, possibly the biggest steal in W1. 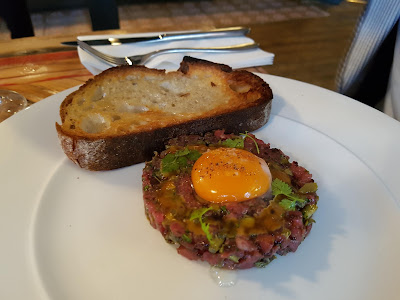 Stealth chose the starter-sized (still a hefty puck) tartare for her main, probably because it came with yet more yolk on top. I’m not sure if I was offered this, and declined, or if the question was ever answered, but there was precious evidence left to suggest it wasn’t a success. 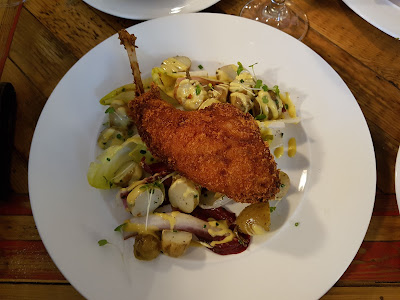 I had the rabbit – a leg that had been confited before being breadcrumbed and deep fried – which was quite lovely and came with some excellent chicory in a punchy vinaigrette and a heap of baby new potatoes, that I was too upset to finish at the time but am possibly even more upset when I think back on not finishing them. 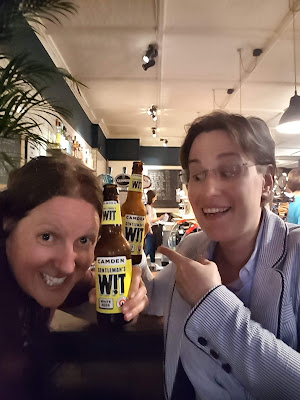 I did manage another beer though. Several more, although I attribute this partially to the fact that a summer rain storm swept through - the first and last proper rain I have seen in weeks – just as we were leaving and we were forced, like rats from a sinking ship, back to the bar. At lease our friendship continues to weather all storms.