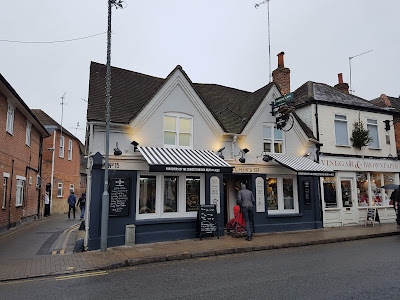 Sometimes I have good ideas, sometimes I have great ones, and sometimes they might be considered somewhat questionable - such as deciding I fancied opening a tin of corned beef after a night drinking whisky (I've still got the scars), or deciding a solitary bottle of factor 8 was sufficient for a week in the Algarve, in July (I'm still peeling); or persuading my other half - with just the merest hint of bribery -  a visit to Tom Kerridge's newly opened pub-cum-butchers for lunch in the run up to Christmas was a good idea. 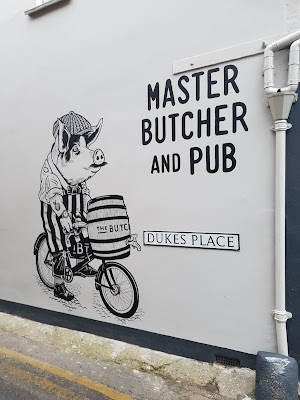 The Spittal Street site, the third in Kerridge's Thames-side empire, was previously the home O'Donaghues - a quintessential, low-beamed Irish sports bar for lovers of Guinness and rugby, preferably both at the same time, while wearing a plush hat with a shamrock on it.

The new vibe is much more Marlow, darling, with the press release describing it as; "a welcoming hub for the local community where people can meet for a drink, a bite to eat, and buy well-sourced quality meat to take home.” That being said, there's still three TVs showing sports here, although - like at the Coach down the road - they seem a fairly pointless addition, with only the Ewing and the bar staff able to see Chelsea vs Newcastle on the screen behind me, although she seemed to be enjoying it rather more than my company. 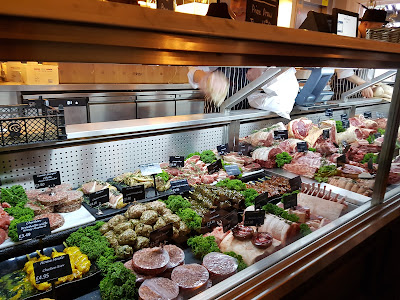 But before we could start ignoring each other over the lunchtime kick-off, we had to make our way past the scum of eager Marlovains seemingly overcome, rather like Uncle Monty as a youth, that a butcher's had finally returned to town. Resplendent in their blue striped aprons and straw hats, it's a professional looking set-up with the offerings running from homemade chicken kievs to carefully chined racks of lamb and magnificent aged wing ribs.

I'm taking a point off for not having any faggots, my all-time favourite old school butchers treat - preferably served with chips, mushy peas, and lashings of gravy - but they did have a beatific pig's head in their glass-fronted fridge in the corner, who stared beadily from the corner as I enjoyed his bretheren. 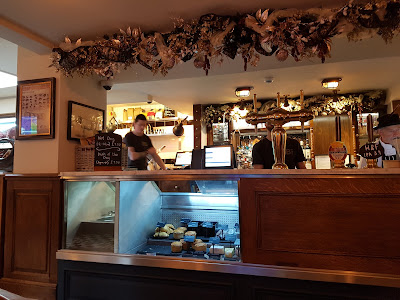 While the beverage of choice appeared to be cold white - being ordered and dispatched at an impressive rate by a large proportion of the clientele - with an afternoon of Getting Things Done ahead, I was happy to stick with a pint. Like his other ventures, Kerridge has partnered with Greene King, who brew his Hand & Flowers ale. Fortunately, they also had Rebellion's Roasted Nuts, one of my favourite seasonal beers and brewed less than a mile down the road. 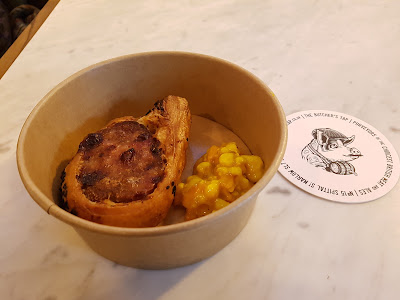 The sausage roll was, more accurately, cochleate. A snail-shaped slice, edged with flaky pastry, rather than the more familiar porky parcel. Despite its unorthodox shaping, it was pretty decent, although for £3.50 for a moderate chunk, you would hope so. Piccalilli, with its ominously lurid appearance, improves the flavour most things it cosies up with, and here was no exception. 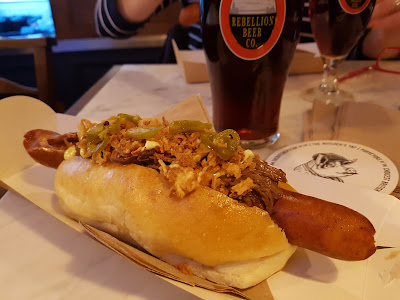 We also ordered a couple of dogs - as they were just preceded by the word 'hot' on the chalkboard stand and there were no menus to be seen, I relied on Google to reliably inform me the over-sized smoked sausage was topped pulled pork, pickled chillies, crispy onions and mustard mayonnaise. Sometimes I marvel at the modern world - why talk to anyone when you can find out from an illuminated four inch square in front of your face. Inelegant to eat but indisputably good, even at £7.50 a pop. 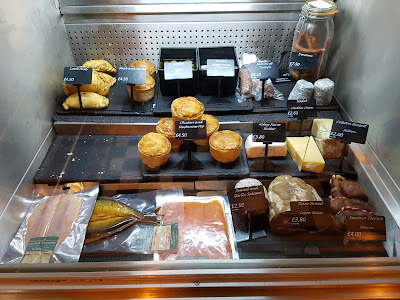 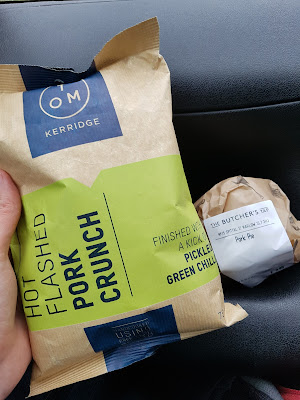 However grim things seem, pork products are a well-known cure-all and our mini haul from the small deli counter was no different. Pork crunch had been 'hot flashed', which sounded like something that might befall the women we had seen queuing with their wicker baskets for their chops and sausages but, more prosaically, seemed to mean the puffier type of scratching, rather than the Mr Porky tooth-smashers. 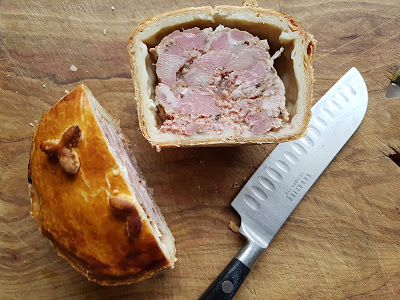 The pie was also highly commendable, although the pastry seemed a little lighter and chewier than the common-garden hot water crust, with layers of lamination when I cut into it. The filling, however, was the real deal. lots of peppery chunks of juicy pork, with a good jelly ratio (i.e. pretty much none), and perfect eaten on the sofa with a good dollop of mustard and another bottle of Roasted Nuts. So, not such a bad idea of mine after all....