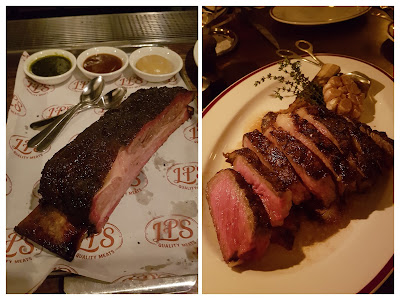 Our recent month away in Australia and Singapore meant elevated consumption levels. Which, considering how much I normally consume, was an impressive amount of eating and drinking. In my head, I planned to return home, leaf through the thousands (literally) of photos and bang out a few blog posts before the jet lag had time to kick in.

Of course, reality is the conjectured state of things as they actually exist, and that meant spending the days following our return on the sofa in my pants, eating cold pizza thinking about finally unpacking my suitcase (I’m almost there). 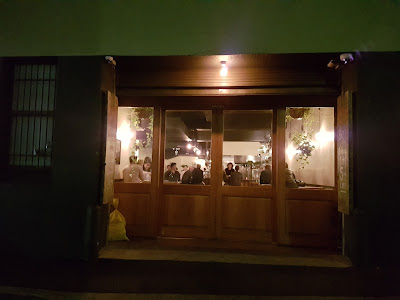 Although the blog has been on the back-burner, I do want to log the most pertinent details of the trip somehow - not wanting all those gained pounds and dropped dollars to be for nothing. And while there were plenty of highlights, which I’m hoping to compile into some sort of roundup, two meals we enjoyed - at LPs Quality Meats and Hubert, both in Sydney - stand out.

There are many parallels, not least the bovine centrepieces of both feasts, but the most significant factor proceeding each meal was what had happened the night before. More accurately, how hung-over we were. In fact, if the food hadn’t been so memorable, there may not have been a blog post at all, as all my other memories are decidedly hazy. 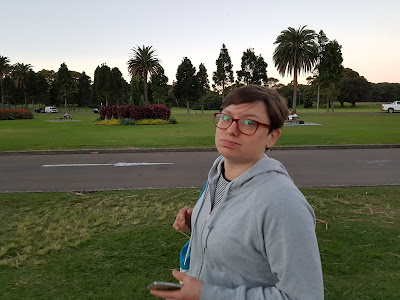 Our meal at LPs Quality Meats in Chippendale came the day after my brother in law, Robbie G, had taken us on the inner-west pub crawl. An all-dayer that ended hours later with us in the Coogee Bay Hotel and the Ewing’s wallet in some bar in Newtown.

Wallet safely retrieved the following morning (thanks, Dad), we decided to burn off the excesses by walking over to Chippendale through Centennial Park. A nice idea until you consider it was nearing sunset, so cue loud dive -bombing parakeets coming to roost and a sky darkly swirling with bats. Not the best thing when you’re still feeling sketchy form a day on the high ABV IPAs. 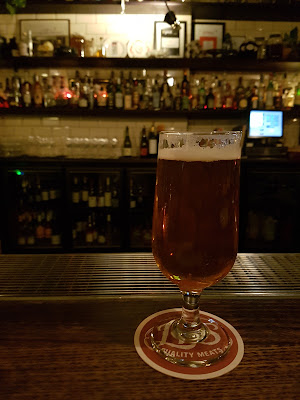 We arrived at the trendy – think dark, loud and stripped back - smoking specialists early on a Saturday evening and were given the last two spots at the bar. Despite our parlous state, I do love a bar seat and it was a pleasure to see into the kitchen, and chat with the bar staff throughout our meal (who made the most delicious looking and TASTING cocktails, proper cocktails, that taste like they are only made of alcohol, like they should be - TE). It also made it hard to turn down a beverage and with the beers coming from the Grifter Brewery, the second stop on the previous day’s tour, it would have been rude not to. 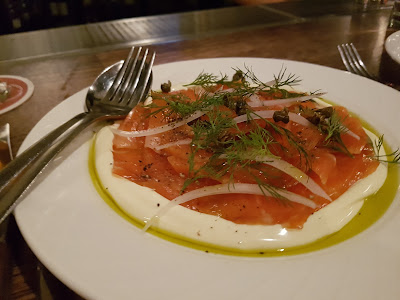 Thick slices of Applewood smoked sea trout were served with crème fraiche, crispy deep-fried capers and dill. As Julie Andrews may have sung, some of my favourite things. For a restaurant that specialised in the meaty stuff, this was possibly my dish of the day, simple well-balanced and a joy to eat. The generous portioning also meant even the Ewing didn’t mind sharing (lets get this straight, what I don't like about sharing is when the person you're 'sharing' with eats at double the speed as you and seems to be sharing the the time it takes to eat the food not how much - that's one of my issues with 'sharing' - TE) . 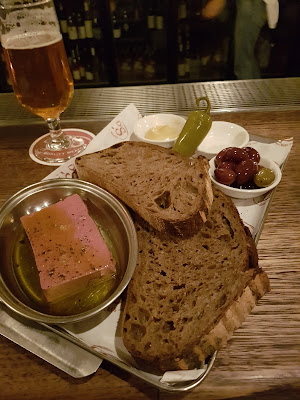 A tranche of glossy duck liver pate came with olives, jalapenos, dijon mustard and thick slices of homemade dark sourdough. Light and fluffy in texture, more like a parfait, it was perfectly piqued by the pickles and the excellent smoky bread. An exemplary beginning to the meal. 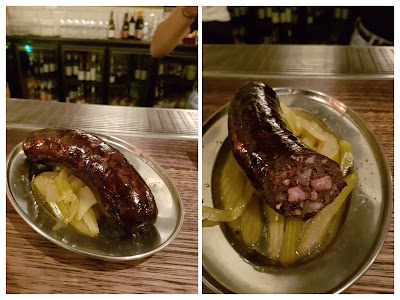 When you’re feeling more than a little delicate, ordering boudin – a smoked sausage made with pig’s blood - may seem like a questionable choice but this was light and delicate and exceptionally good. More like a Spanish morcilla than our own denser black pudding, the filling was lightly spiced and studded with sweet currants, nuts and chunks of back fat. Shards of pickled celery provided a crisp and tangy counterpoint. 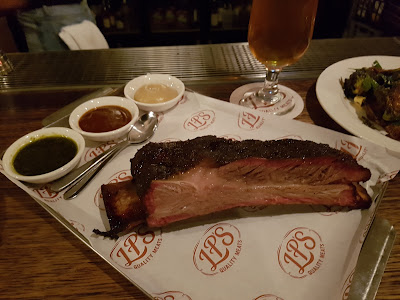 Any full-blooded carnivore would have felt a pang of regret passing up their other smoked meats – crispy-skinned porchetta, lamb stuffed with merguez sausage and chicken rubbed with dill and paprika, anyone?– but with the, now iconic, beef rib on the menu there was only ever going to be one choice.

Like everything else we had eaten before it, it was faultless. The spice-rubbed bark giving way to tender beef, shot through with the tell-tale pink rings of properly slow-smoked meat . Sticky, smoky, juicy, fatty - pretty soon I was like a dog with a bone, only with slightly less decorum. And, as an avowed condiment queen, I didn’t even need the chimichurri sauce and chilli sauces alongside (although I may have eaten them with a teaspoon anyway). 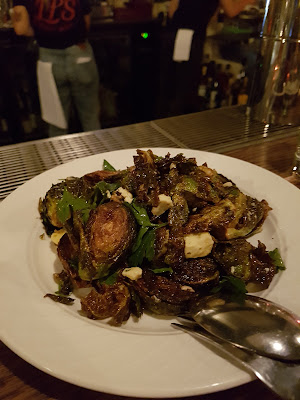 There were also greens alongside, to placate the Ewing. Although I'm not really sure fried brussels sprouts with chunks of ricotta salata and almonds was doing us much good overall. Tasted bloody good, though. 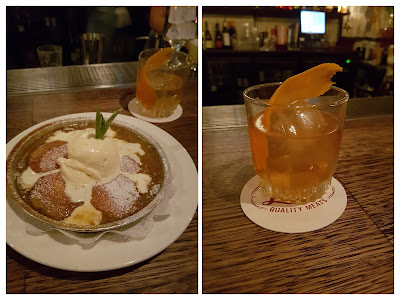 Pudding – obviously a given, they had even kindly offered to box up our leftover rib so we had room – was a toss-up between the light and refreshing coconut and watermelon granita and the pudding chomeur, or poor man’s pudding – a baked sponge cake drowned in smoked Canadian maple syrup and topped with ice cream. I say it was a toss-up, it wasn’t really even close. Cake wins all day long, especially with the ringing endorsements from the bar staff.

And, although the Ewing was adamant she was ‘never drinking again’, or certainly not until my niece’s christening the following afternoon, seeing a succession of old fashions being mixed weakened her resolve and she had soon ordered one to go alongside desert. 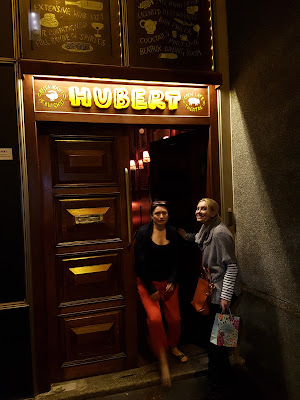 For our trip to Hubert -  a belated 40th birthday celebration for the Ewing, very kindly organised by my sister and brother-in-law - we somehow contrived to be in an even more delicate state after a Monday night/Tuesday morning merrily spent glugging Prosecco in our old friend the CBH. Well, I use the word ‘all’, loosely. The Roscoe’s were suffering, while Robbie G and the birthday girl were displaying a little more resilience. 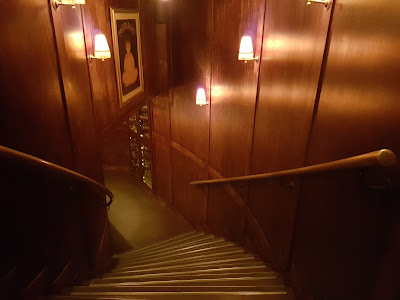 Time Out’s restaurant of the year, Hubert is a hip subterranean hangout in Sydney’s CBD. French in influence, as I descended the stairs the dark wooden panelling reminded me a bit of going down to the Bar Americain, at old favourite Brasserie Zedel, minus the gold and marble. While it’s not quite the hot ticket it was, reservations are only available for parties of six or more, so thankfully Robbie G had managed to get there early and stake out one of the prime seats in the house; for once, the Roscoe’s weren’t relishing the idea of hanging out waiting in the bar. 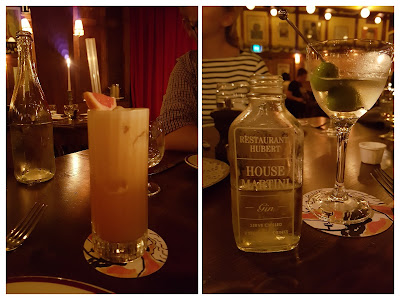 We did rally ourselves for an aperitif; a selection of beers for a thirsty Rob; my sister originally requested a bloody mary but was told they don’t serve them due to the fact ‘we like to make all our juices fresh’. Why this precluded tomato juice, wasn’t quite clear, but she settled for a margarita anyway; a Campari (best hangover drink ever) and grapefruit took the edge of my lurching stomach; and a stiff martini, served in its own little bottle with the choice of an olive or a twist, helped sharpen the Ewing’s appetite. 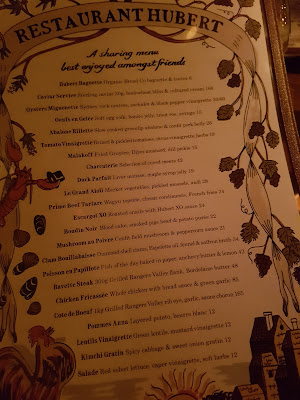 The menu is comprised of 'sharing plates' of various sizes that involved a good five minute run through from our server, something that always makes my heart sink. While I would happily of eaten any (all) of it, I did find the whole process slightly exhausting, especially in my delicate frame of mind. I also wanted the steak tartare, while the birthday girl wanted the cote de beouf, so I had to exercise the art of compromise to avoid all ending up with gout. 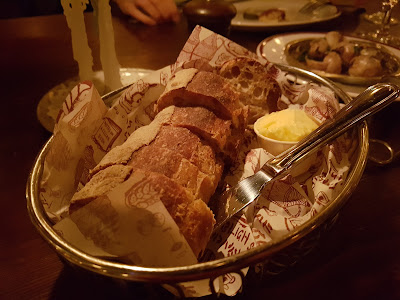 A basket of crusty baguette, like the entrance, also reminded me of Zedel, although it cost six bucks here (in Piccadilly it’s free, with refills if you ask nicely) and, strangely given the silver bread basket, the butter comes served in the little paper pots you get filled with ketchup in McDonalds. 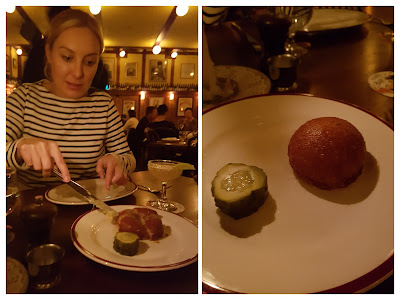 The malakov, a deep fried ball of greueyre served with slices of pickled cucumber, was as great as it sounds. Although, if you’re as greedy as me, a quarter just isn’t gonna cut it. No matter how nicely it’s sliced up by your sister. 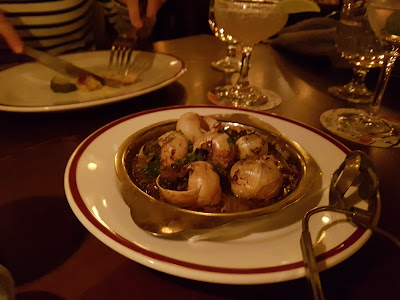 I’m not sure whether I like snails, or just the huge amounts of garlicky butter they are normally baked with, especially when soaked up with chunks of crusty bread. Here they are served gratinated with XO sauce –  made with dried scallop, red chili pepper, dried ham, dried shrimp, garlic - a funky chinese twist that matched the sweet little (in a snail’s case, size matters and small is beautiful) molluscs just as well as the more familiar brashness of the allium. 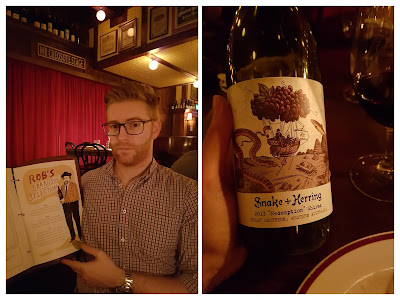 Wine, although not from Rob's Spanish selection (kinda odd given the big French influence in the food), was decent. (Honestly, I don't have huge recall of the finer details, but i know I gamely drunk my glass. Such a trooper.) 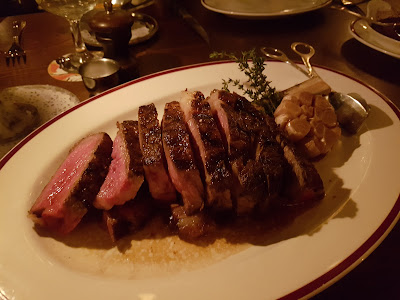 Torn between the duck – a limited number are roasted, with a reto orange sauce everyday – and the steak, we almost ended up with both when a tiny waitress appeared with a huge platter of the former and nearly unceremoniously dropped it over the Ewing’s head. Thankfully disaster was averted by a passing colleague, and soon we were united with our rightful main, the Rangers Valley rib eye served with roasted garlic and sauce choron.

To my shame, I could only manage two slices; but I don’t think the others were complaining that much. Although I was complaining about the amount of roasted garlic the Ewing had eaten. For days after. Also, sauce choron, a bernaise with tomato, may even be better than the original. And that is high praise indeed. 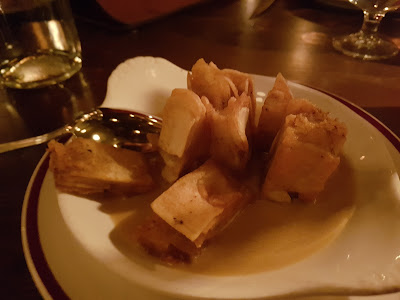 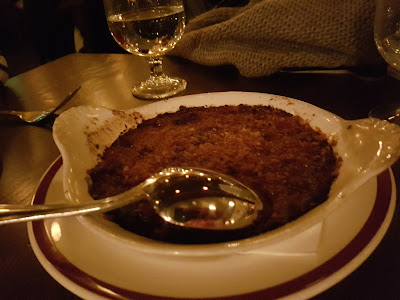 What goes better with fried meat in a rich sauce than fried potatoes in a rich sauce. pommes anna, wafer thin layers of crispy potatoes upended in a puddle of beurre blanc, bought to mind the lauded confit potatoes at the Quality Chop House that still flood my Instagram feed in all there jagged golden glory, but with an added pool of buttery sauce to soak into the crispy edges.

There was also a kimchi gratin, the spicy, fermented Korean cabbage baked with a topping of buttery breadcumbs that made a surprisingly punchy foil for the richness of the meat and spuds. 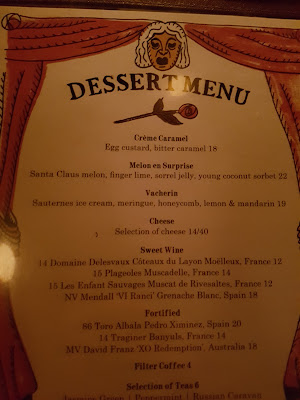 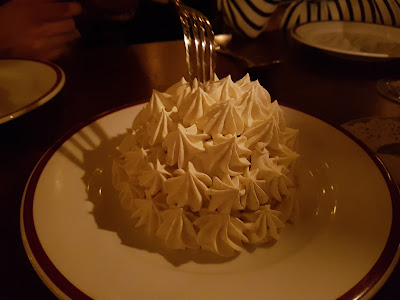 The Vacherin, a frozen bombe of sauternes ice cream with a honeycomb, lemon and mandarin jelly centre, appeared covered in piped meringue, giving it the appearance of a frilly doll that guard the spare loo roll that my Nan still proudly displays in her bathroom. I'm going to have to take Rob and the Ewing's word this was good, as they are the only ones who tried it. But it certainly didn't hang about for long. 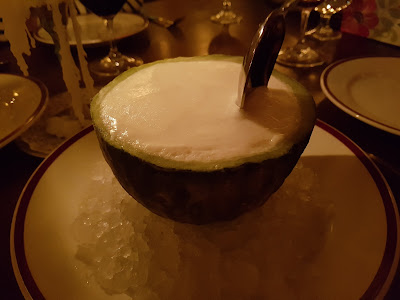 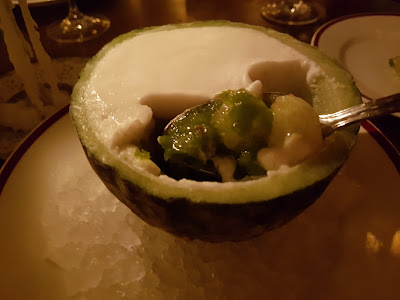 Unusually, the melon en surprise was the dish I was most excited to try, despite my love hate relationship with the fruit. A hollowed out Santa Claus melon, topped with a layer of young coconut sorbet, arrived containing a 'surprise' of finger lime, sorrel jelly and some other bits of deliciously refreshing shizzle, just what the doctor ordered. (He probably would have ordered an early night and a week off the sauce, but hey). 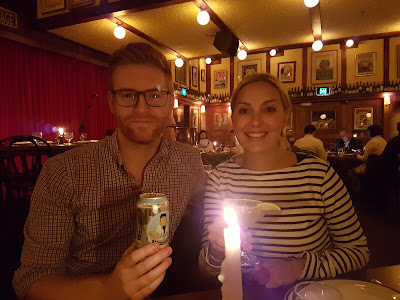