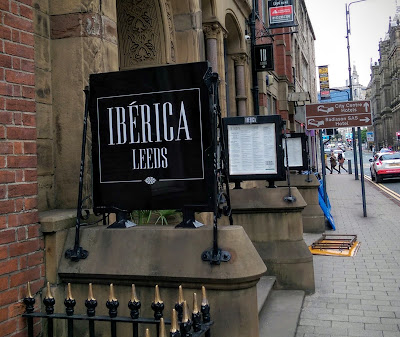 When I was young and carefree (not that long ago) and unencumbered by the albatrosses of a mortgage and an adopted cat and trying to keep my, previously gleaming, rust bucket on the road, I used to like to travel, and the Iberian peninsula was always a favourite destination.

Now days, while I'm keen to get away whenever possible, spending the late summer in Seville or a few nights in Bilbao seem to have been usurped by trips to Salford, Hackney Wick and the Gordano services on the M5. As much as I enjoy a pint of Manchester bitter or a bottle of West Country scrumpy, and I don't even mind the drizzle, sometimes you have a hankering for calamari and cold sherry. 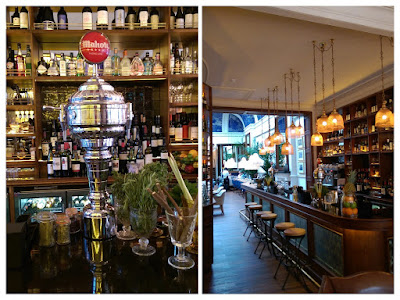 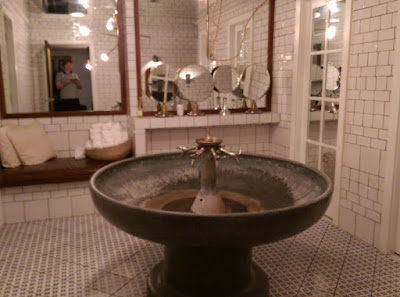 On another glamorous recent trip, this time to West Yorkshire to visit the family, my aunt and uncle must have sensed my pining for foreign climes and offered to take us out to lunch at the newly opened Iberica in Leeds city centre. It was as though the weather gods knew too, and attempted to recreate the scorchio Spanish climate for our stay. Indeed, for probably the first time on record, somebody got sunburnt just outside Leeds. Sadly that somebody was me; my nose is still peeling in protest.

Found in Grade II listed Hepper House, a former Bonhams auction house, it's a striking building, with a glass roof and vaulted ceiling, that oozes Moorish sophistication the way a good tortilla oozes when you cut it. The unisex loos are as impressive as the main dining room, with their patterned tiles, piles of fluffy towels and fancy sink. Apologies for the blurry photo, either the result of switching on my macro lens or my greasy fingers from eating too many croquettas. 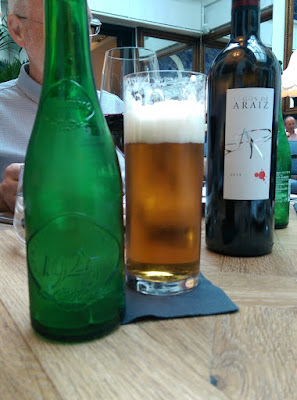 As we were with my aunt, clearly there was bottle of vino tinto involved, in this case a beefy tempranillo from a big wine list. They also offer a huge range of 'fishbowl' GnT's - although sadly not at Spanish prices. Beerwise, along with ice cold Mahou from the tap, they stock bottles of Alhambra Reserva 1925. An interesting beer, as far as lagers go, with a spicy, malty flavour that hid its 6.4% well and paired nicely with the fried food. 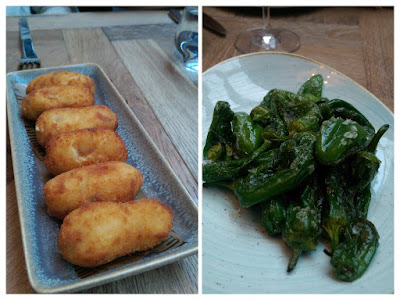 The jamon croquettas were masterful; a gossamer thin crust gently cradling the wobbly, ham-flecked bechamel interior. Blistered padron peppers were sweet, salty and smoky, although surely the best thing about them is playing chilli roulette and hoping (or not) that you get the hot one. 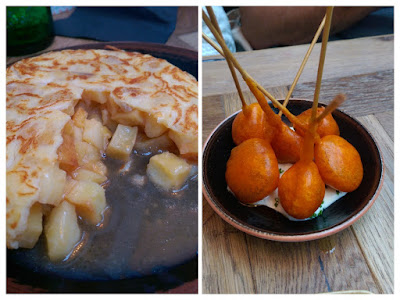 The tortilla, although requested to be served still soft in the centre, oozed more of an unappetising watery puddle when cut into. Taste wise, it was pretty good, if a little salty with the potatoes seeming to have already been fried, like little chunks of patatas bravas.

Better were the chorizo lollipops; chunks of charcuterie impaled on cocktails sticks and dipped in batter that had turned a vivid Donald Trump hue on deep frying from the paprika in the sausage. A well-judged pear aioli was both sweet with fruit and punchy with garlic. 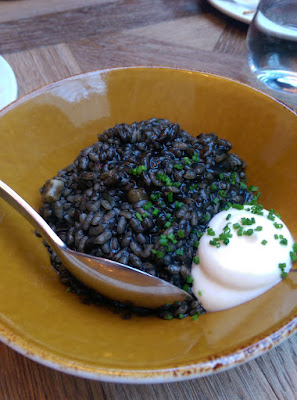 The standout plate was the, gloriously gothic, arroz negro; a short grain rice dish cooked with cuttlefish ink and a fish stock and finished with prawns and springy rings of cephalopod. A dish that leaves you with ghoulishly blackened lips that makes you suddenly thankful for the abundance of mirrors in the loos. 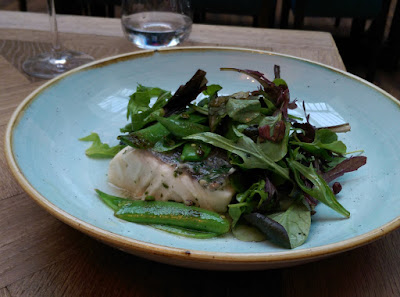 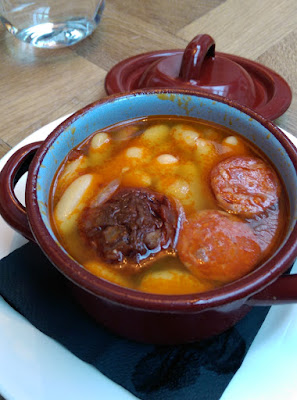 Hake with green sauce and a token smattering of salad was light and fresh and accurately cooked, if a little underwhelming - the biggest danger when you try and refine the salty, smoky rough and tumble of good Spanish food. The Ewing did have high praise for the bed of sauteed sugar snaps, though.

The dish of the day (offered with your choice of tapas to start for a bargain £12) was fabada, the frugal stew of beans and pork from Asturias. Although the thrifty nature of the dish was emphasised by the solitary slices of morcilla and chorizo bobbing on top, and the porky stock the beans were cooked in was a little lacking in depth, the beans themselves were wonderful; nutty and creamy and cooked to the perfect consistency. 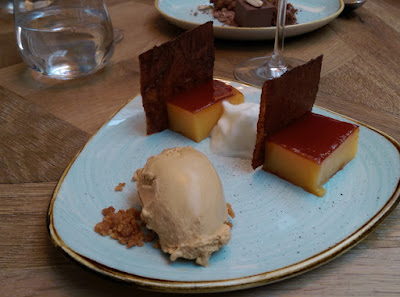 Tocinillo de Cielo is a desert that roughly translates as heaven’s custard or heaven's little pig - surely the most glorious name for a pudding. It even looks a bit like bacon, with its two tone stripes.

Modelled on the ubiquitous wobbly flan (or crème caramel across the border) this is a denser and sweeter dessert, with a rich flavour that reminded me of the egg yolk custard buns that round out a good dim sum feast. The salted caramel ice cream alongside was flawless, although it did take the dish to a burnt sugar crescendo that kept my pancreas working overtime. The only part I couldn’t get excited about were the wafers, that resembled fossilised leaves in the park, and had about as much flavour. 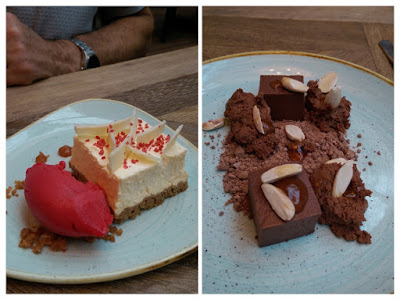 Other desserts included a strawberry cheesecake that was topped with shavings of that well know Spanish cheese, Parmesan. While not a strictly orthodox addition in a Spanish restaurant, I enjoyed the contrast of smooth and bland with sharp and salty. Even better was the fantastically tart and smooth strawberry sorbet, probably the only time I have seen the addition of a sorbet enhance a cheesecake in any way, although I would happily have eaten it on its own. 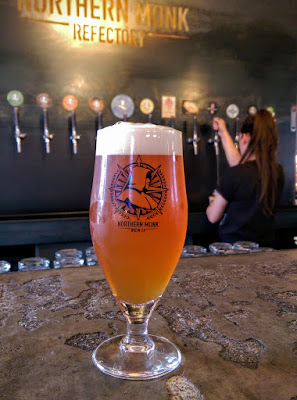 To carry on the holiday theme we had to have ice cream, this time in the form of the Neapolitan Pale Ale brewed by Northern Monk in collaboration with Tall Boys Beer Market (treasure trove of beery beverages found in the Corn Exchange).

Originally a one-off, the brew was so popular they have just brewed the next batch, and we enjoyed it fresh from the brewery. Still one of my favourite places for a pint, Northern Monk combines fantastic beer  - both their own and others – with great staff, cakes and pies and the best light I’ve ever seen, making even my blurry phone pics look good on Instagram; even with #nofilter. And while north Leeds may not be Lloret del Mar, the beer is much better.
Posted by Amy at 06:30