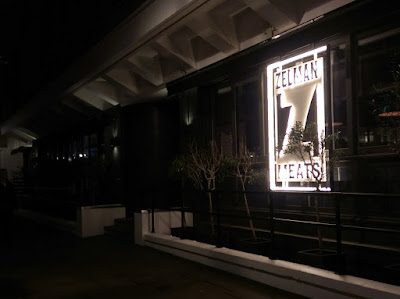 You'd think that, by having a risk management course that conveniently coincided with Zelman Meats first 'proper' opening night, the blog might have finally made it ahead of the curve. But, judging from the vast lumps of bloody protein and truffle-draped fried potatoes that were punctuating my Twitter stream the week before, I was still playing catch up.

Happily, my motivation is spurred by greed rather than getting there first (although if you're greedy, that's not a bad place to be). And, of course, to a enduring love of rare meat that goes back to my birthday meal each year as a child; rump steak with fried mushrooms and onion rings. A love of meat that even trumps the sadness I felt when I found Zelman would be replacing the venerable Rex and Mariano, with their infamous Sicilian prawns and other raw fishy things. 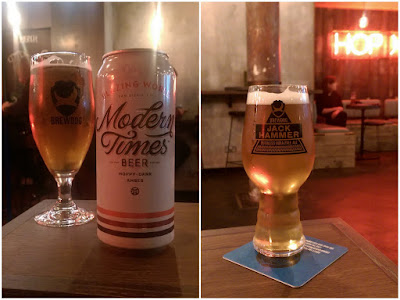 Before meat there has to be drink and, fortuitously, I just happened to wander past Brewdog's latest Soho gaff en route to dinner. Less fortuitously they, after 4 days of being open, had run out of Ballast Point Sculpin, but I made do with a schooner of Jack Hammer and a rather nice pounder (that's 16oz, or 454mls if you're metric) of Modern Times Blazing World, perfectly described with three words; 'hoppy, dank, amber' across the front tin. 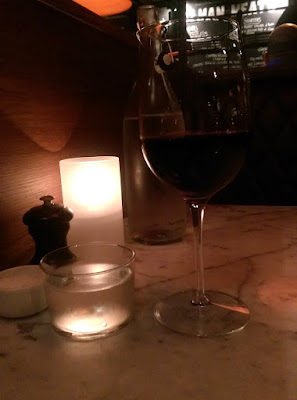 Whereas Rex and Mariano went with an open plan, zinc pipes and white tile approach, Zelman has gone classic steakhouse, complete with comfy leather booths and dark little nooks and crannies. Another big change is the ordering system. Where as R&M had a novel but frustrating (possibly because the Ewing is horribly clumsy (endearingly - TE) and I'm just a heathen (correct - TE)) iPad ordering system, Zelman goes back to the old school with real people - my waiter, a lovely chap from Rimini, being a real charmer.

Thankfully not all the best bits of R&M have been lost; the red prawns are currently available as a starter on the (regularly changing) menu, which can now be found chalked up on blackboards, positioned at head-tilting angles around the restaurant. 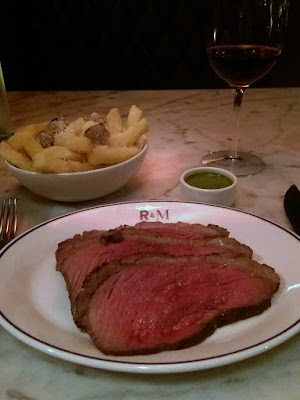 If I could imagine a perfect dinner, it might look a lot like this. 300g of roasted picanha (or rump cap to us non-Brazilians) thickly sliced and served with chimichurri, fresh truffle and parmesan fries (get the truffle fries) and a glass of Malbec. A cheesy, beefy, funky, garlicky joy; eaten to the sound of my own gentle sighing.

While rib eye is classic, bavette is for the cool kids and the loin was considered so good that Henry VIII knighted it, I've always loved a bit of rump, and this was a plate of childhood birthday dreams come true. Rather like a roast on steroids (they also offer Sunday lunch, which I imagine would actually be a roast on steroids). 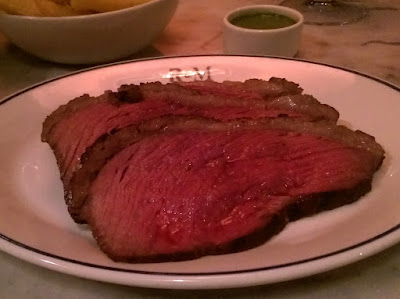 They also currently have roasted Chateaubriand (available in portions starting at 200g) and Fred Flintstone-esque roasted beef ribs on offer, alongside various things involving feta, courgettes and aubergines, if you're that way inclined. 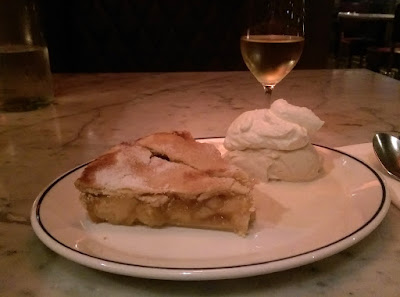 After weighing up the risks - I knew my earlier training would come in handy - I decided that finishing with a slice of Will's Nan's apple pie was in order; and, being that I was throwing caution to the wind, with a glass of chilled Tokaji alongside. With crisp, buttery pastry, tart apples and coming with both vanilla cream and ice cream, it proved a gamble worth taking. 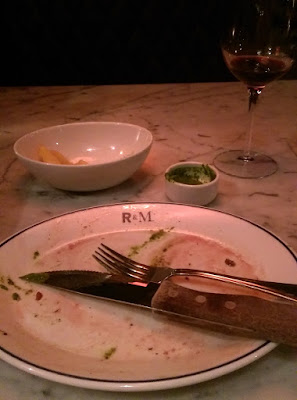