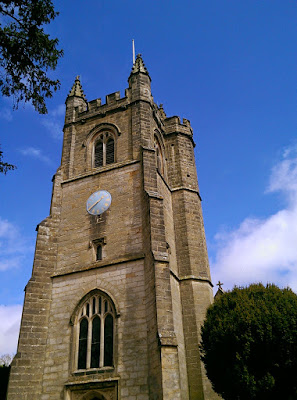 Despite the potential for unwelcome denouements, drunken confessions and the appearance of strange half cousins with wandering hands, family celebrations are great fun. And even more so when there not your own. So when the invite to the christening of Stealth's nephew Louis, and the subsequent garden party, dropped through the letterbox, the Ewing and I were already on our very best behaviour. 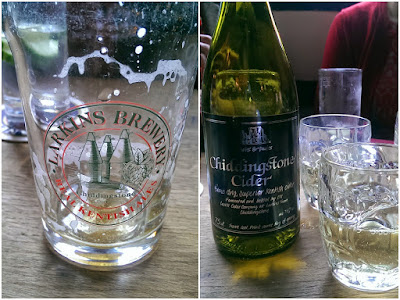 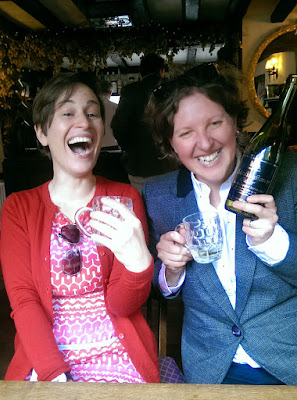 Despite the predictable bank holiday traffic, we somehow contrived to arrive in the chocolate box village of Chiddingstone a little early for the christening service, meaning there was only one thing for it - to the Castle Inn for a restorative snifter or two.

As well as the local Larkin's ale, of which I enjoyed a nicely kept pint, they were also advertising bottles of sparkling Chiddingstone cider. How could we resist, although at over seven percent you can see the effect it quickly had on Stealth and I. 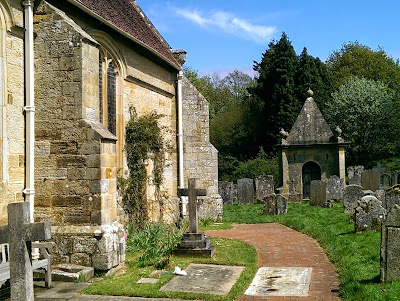 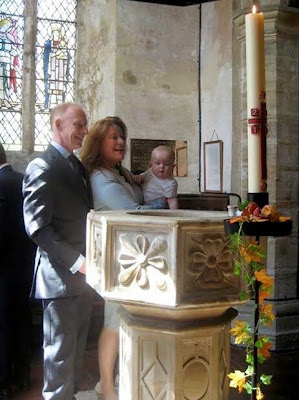 The ceremony was perfect, with Louis being impeccably behaved which is more than could be said for his aunt, who became rather teary at the surprise announcement of Ben and Kate's recent nuptials. All of us, fortified by fermented apple, sang the hymns with the sort of gusto not seen since an E number overload in the second year of infants. 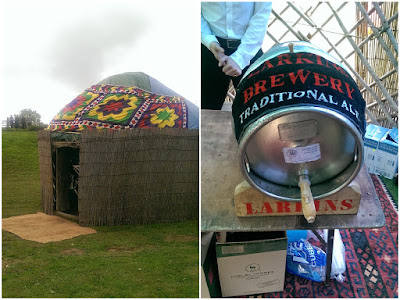 Formalities out of the way, we headed back to Ben and Kate's beautiful converted oast house, a quintessential glimpse of the Kent of yore. After a welcome glass of cold rose (or two) we made our way to the bar in the assembled yurt on the lawn for tops ups. A barrel of Larkin's beer, a solid English choice, was joined by a giant jug of refreshingly tequila heavy margarita. 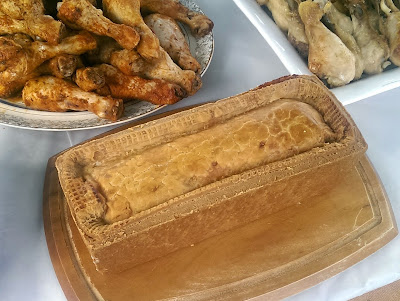 To eat was a veritable feast, straight out of the pages of Enid Blyton. Stealth had told us that her sister made the best sandwiches, and whilst Mummy R will always hold that mantle in my mind, the chicken and cucumber on tiger bread (the secret ingredient, when we asked Kate later, butter you can leave teeth marks in) demanded repeated sampling. Little brown bread triangles stuffed with shredded ham hock were equally glorious and dainty cucumber bought decorum to the proceedings (although not the way the Ewing was inhaling them). 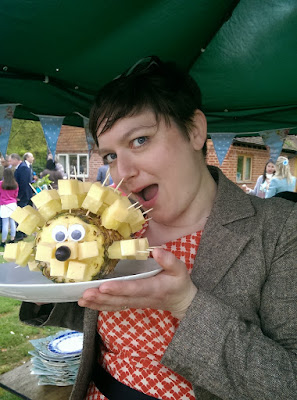 There were chicken legs, and quails eggs and two giant gala pies, Kate's favourite, that saw me luck out with a piece that was almost eggless, whilst Stealth felt equally fortunate to grab a slice shot through with hard boiled ovum. Best of all was cheese and pineapple on sticks, protruding from goggle-eyed fruity hedgehogs, who still managed to look far saner than my wife. 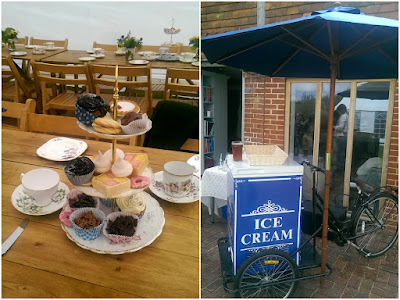 For those with a sweet tooth, tiered cake stands in the marquee groaned under the weight of slices of battenburg, cupcakes, delicious turkish delight scented meringues and chocolate crispie cakes. A huge platter of local cheese was also quickly demolished; a lemony, mousse-like goat being the highlight.

There was even a ice cream truck, popular with both children and the Ewing, who ate both her chocolate cone with chocolate sauce and my mint choc chip with chocolate sprinkles. Strong work. 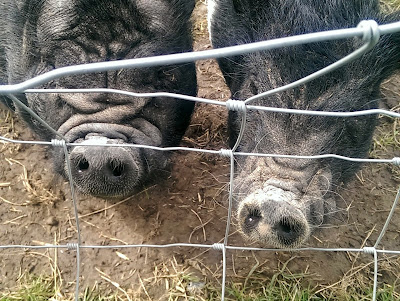 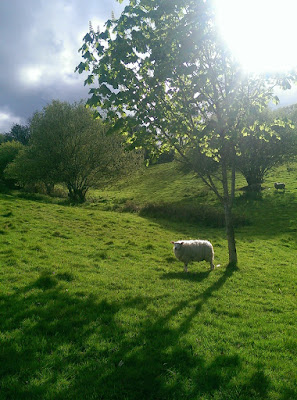 A visit to the countryside wouldn't be complete without a trip to see the micro pigs (Big Pig and Little Pig) who were chilling out in the sun - at least until you stroked their snouts, to which they responded in a frenzied porcine fashion. On a further recce around the place - Stealth in her brogues, the Ewing in her heels, fitting in just like locals - we also made acquaintance with a brace of very friendly sheep in the lower field. 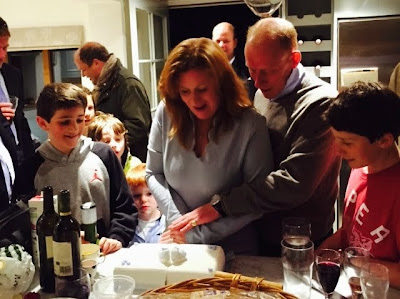 It wouldn't be a party without cake, and Louis' christening cake (whilst being without a layer of Kate's favourite marzipan) was a buttercream-stuffed spongy delight that went particularly well with a glass of port and a toast to the happy family. 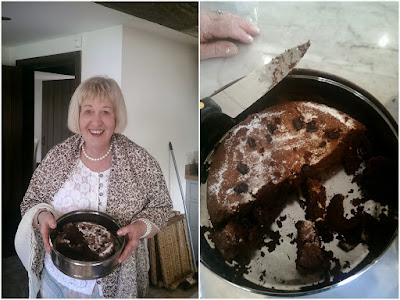 As if that wasn't enough, a fabulous day was crowned with Mummy P opening a tin to reveal a glorious chocolate cake, baked by her own fair hand. It was quickly dispatched - mostly with the help of the Ewing, who was particularly smitten (with both the baked goods and Mummy P).

As one of my most loyal (only) readers, I was delighted when she allowed me to share both the recipe and this lovely photograph here.

To finish:
Glazed violet or rose petals (optional) and, if used, gently pressed in to surface when the cake is out of the oven and still slightly very slightly warm

To Serve:
Bowl of whipped cream or crème fraiche (optional)

Method:
Generously grease one, deep spring-form cake tin - approx. 24 cm
Place on heavy baking sheet
Heat oven to gas mark 2, electric 150 C, fan oven 130 C
Beat the butter, ground almonds and sugar into the melted chocolate to form a paste
Add the lightly beaten egg yolks, rum, coffee and ground cardamom
Whisk egg whites until firm
Beat about a quarter of them into the chocolate mix, then add remaining egg whites with a metal spoon keeping the mixture as airy as possible
Pour mixture into the cake tin
Depending on your oven bake from 50 – 80 minutes.  The mixture needs to be risen and soft but firm to touch when pressed in the middle
Leave to cool

Hint:
Cooking time depends a little on whether you are serving as a pudding or as a cake.  A shorter cooking time will render a more mousse-like effect, which is lovely served with cream.  A slightly longer cooking time will give a more traditional cake texture.  Both are scrumptious and are so rich that 8 -12 people can have a generous helping - depending on greed quotient. 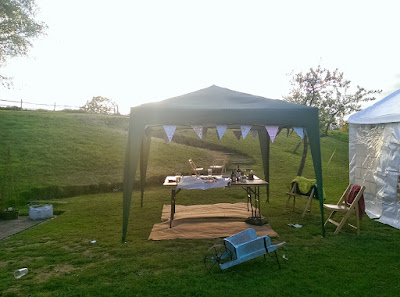