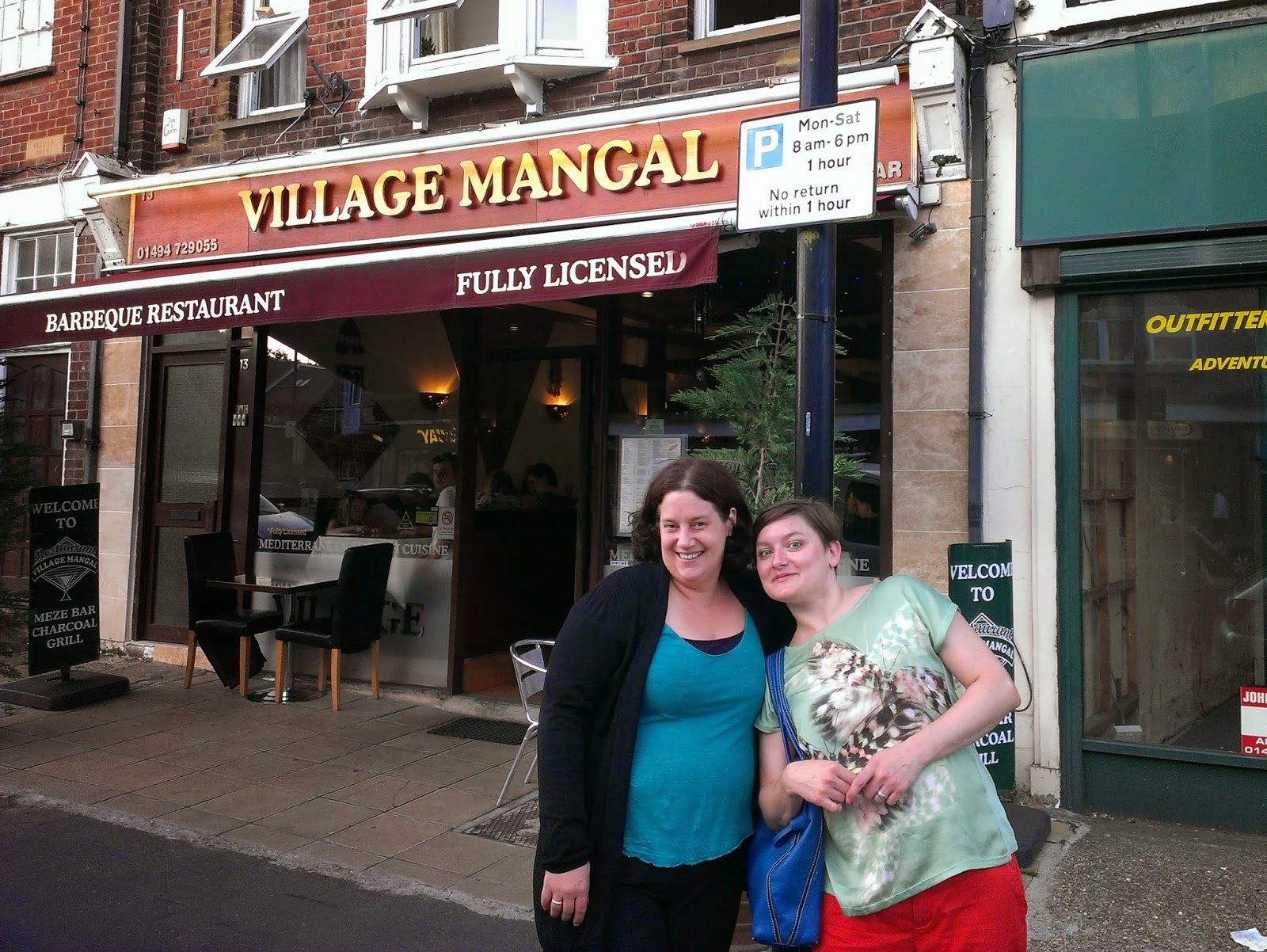 Amersham, the start of the commuter belt, a town thrumming with the gentle bubble of suburban life and the joys (and despair) of nothing in particular. Amersham, the end of the Metropolitan Line, celebrated by John Betjemen in Metro-land (given the marvellous working title, The Joys of Urban Living), who proclaimed of life beyond the town; ‘In those wet fields the railway didn't pay/The Metro stops at Amersham today.’

Knowing the town as I do (my second student job was here, at the foot of the hill linking the old and new towns) you would probably forgive my scepticism that the Village Mangal would be anything more than a high day and holiday sort of place, serving humdrum food -with sparklers in every other pudding to celebrate yet another birthday – washed down with copious amounts of wine and the odd family disagreement. 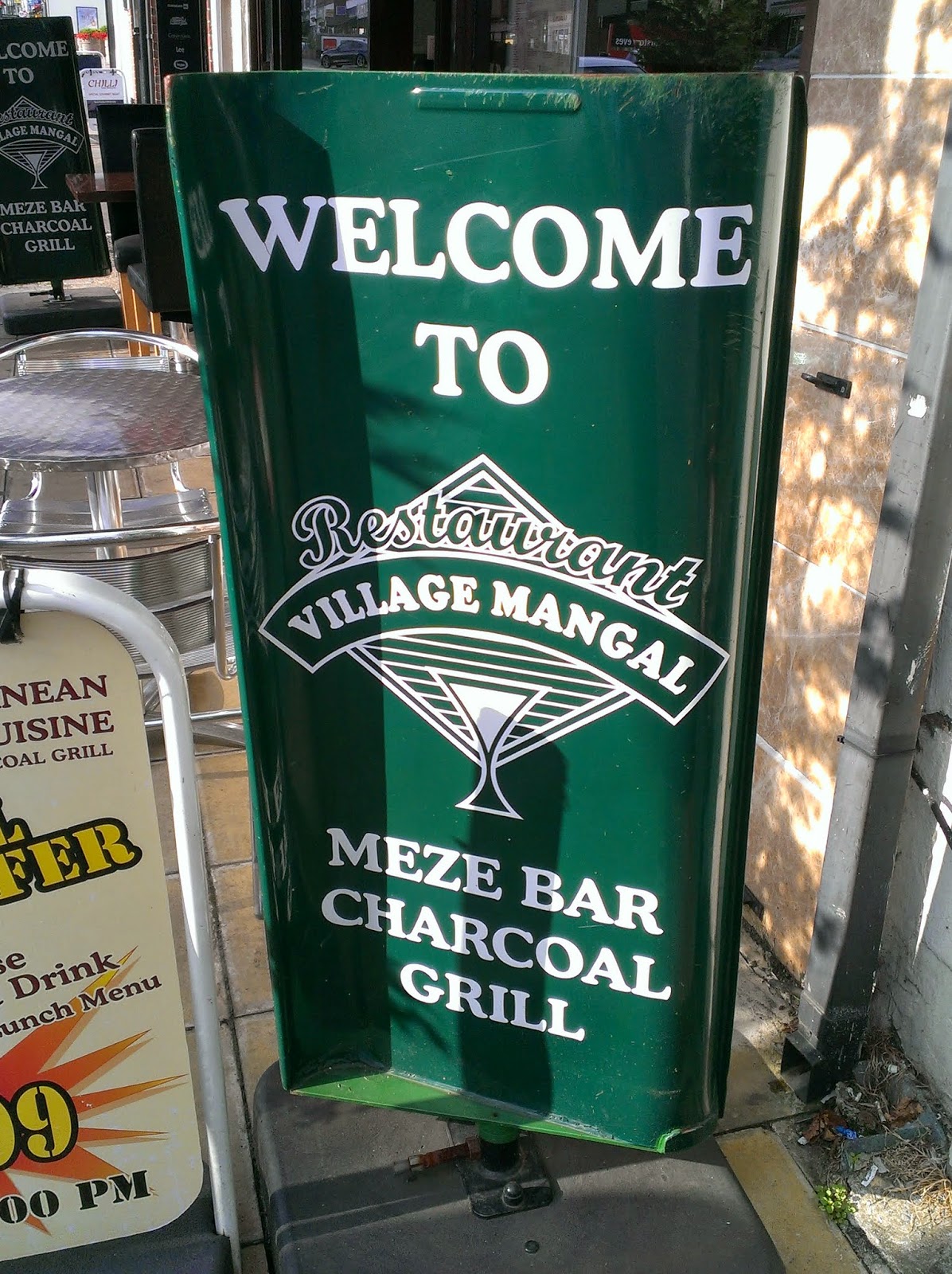 In the spirit of trying new things I had arranged a dinner date with The Ewing and Maz, the Witness (our wedding, not Jehovah's), not hoping for much, but assuring ourselves there would be lots of juicy gossip to make up for any shortcomings in the food. So it was with a degree of happy surprise that the grub turned out to be as plentiful and tasty as the conversations. 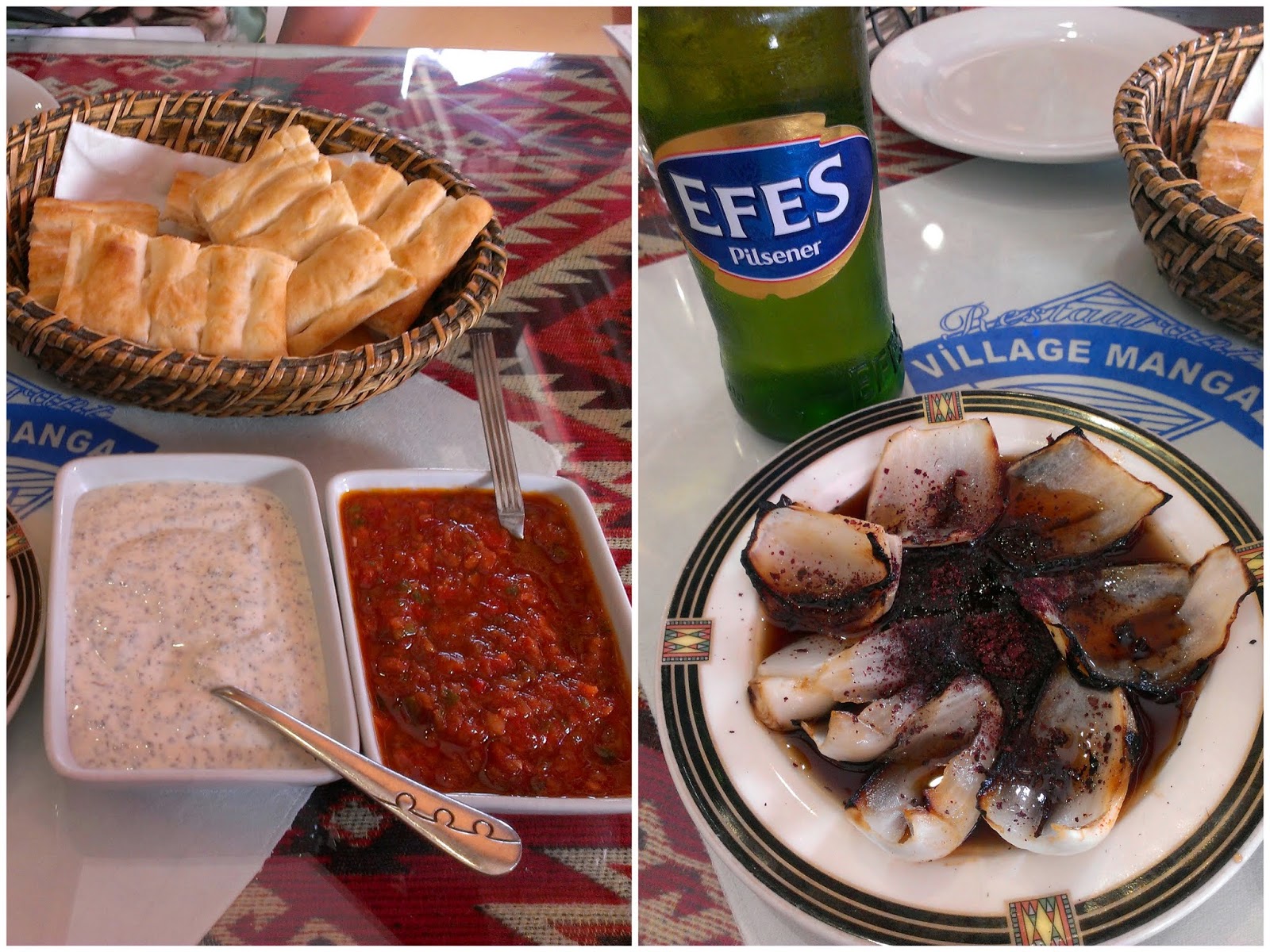 The start of our meal, however, was a little inauspicious. Arriving straight after work to a near empty restaurant meant we bore the initial brunt of the waiters overzealous attention. While they were all very friendly, there is a limit of how many times you need the cruet set rearranging by a procession of different staff, especially if you’re waiting to hear the denouement of a particularly exciting story.

On the food front things started very promisingly with a gratis selection of meze, including a  plate of charred onions dressed with a pleasingly sour mixture of pomegranate and sumac served alongside pillowy Turkish bread and a duo of dips; spicy tomato and olive oil, and herb and yoghurt. 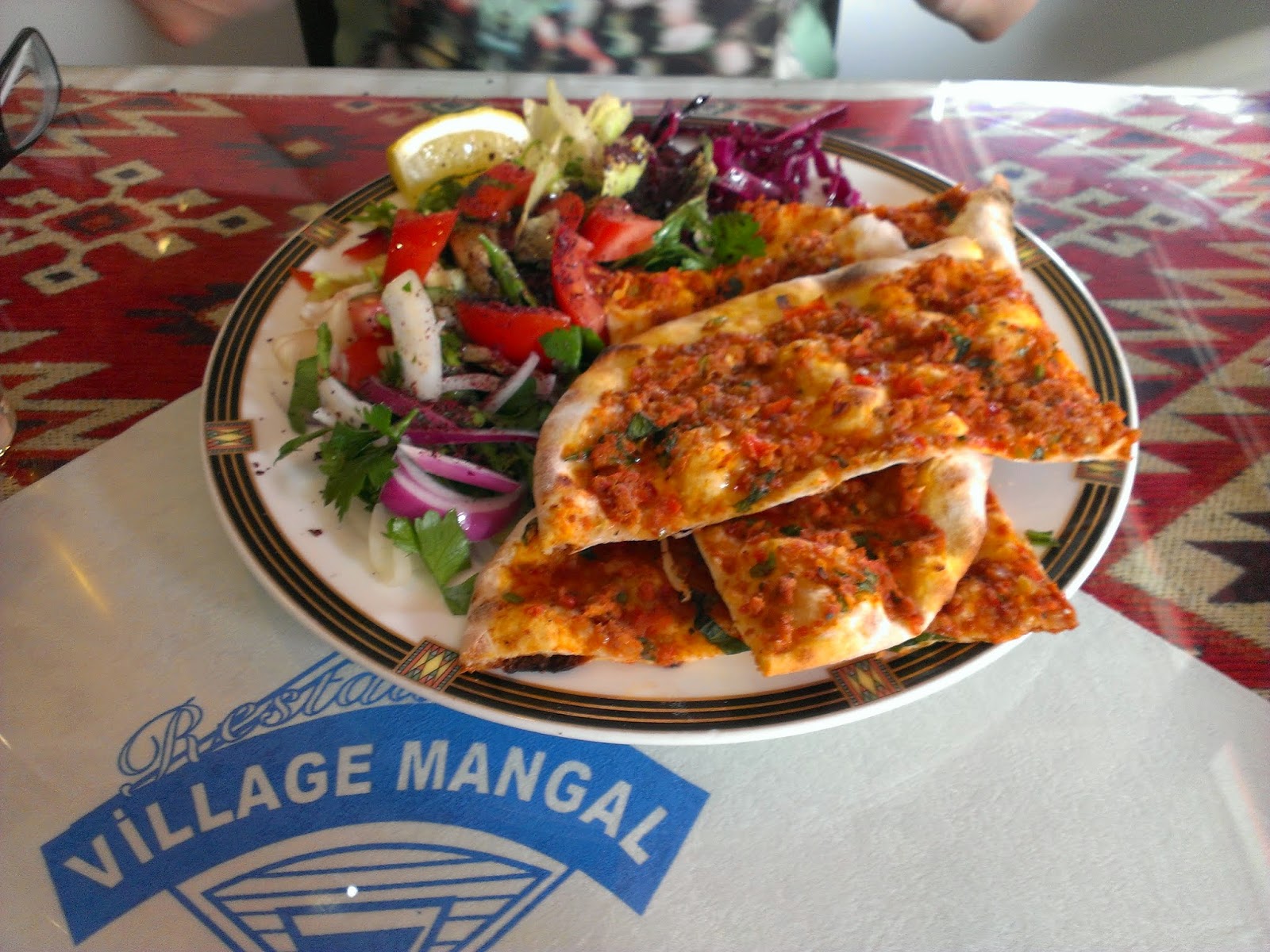 Next was a lamacun, a pizza-cum-flatbread, topped with ground lamb and spices, that came served with a pile of sumac -flecked pickles and salad.  A wholly unnecessary stop gap of a dish that has become something of a must- order when I see it in honour of the magical Stealth, who rates them as one of her favourite foods.

Not only was it superlative, it was also £2.50, hardly Home Counties prices. In fact the whole menu was eminently reasonable, with kebabs and grills, with rice and salad, starting at £7.00 and a two course weekday lunch is also available for bargain hunters. 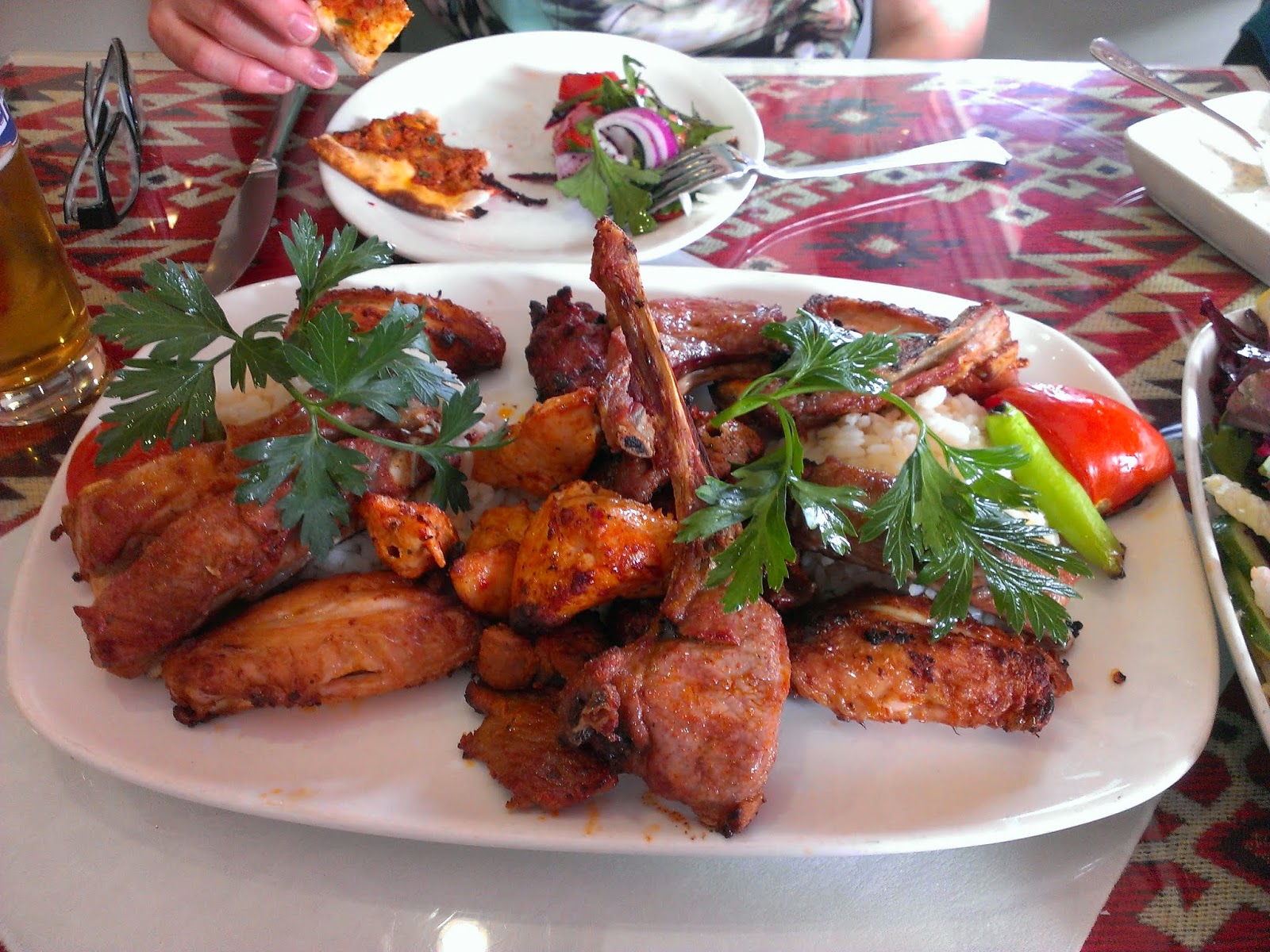 Being ladies with somewhat more expensive tastes the Ewing agreed (using some gentle persuasion) to share the Mangal grill with me; a huge pile of grilled meat and rice served with yet more salad and pickles, £24 all in.

The meat, a selection of lamb ribs, lamb chops, lamb shish, chicken shish and kofte was fantastic; heavily seasoned with salt and spices and smoky from the chargrill. It was only later, when I walked to the back of the restaurant, that I saw how the authentic flavour had been achieved – although the thick fug of smoke and heat should have probably have given the game away sooner. 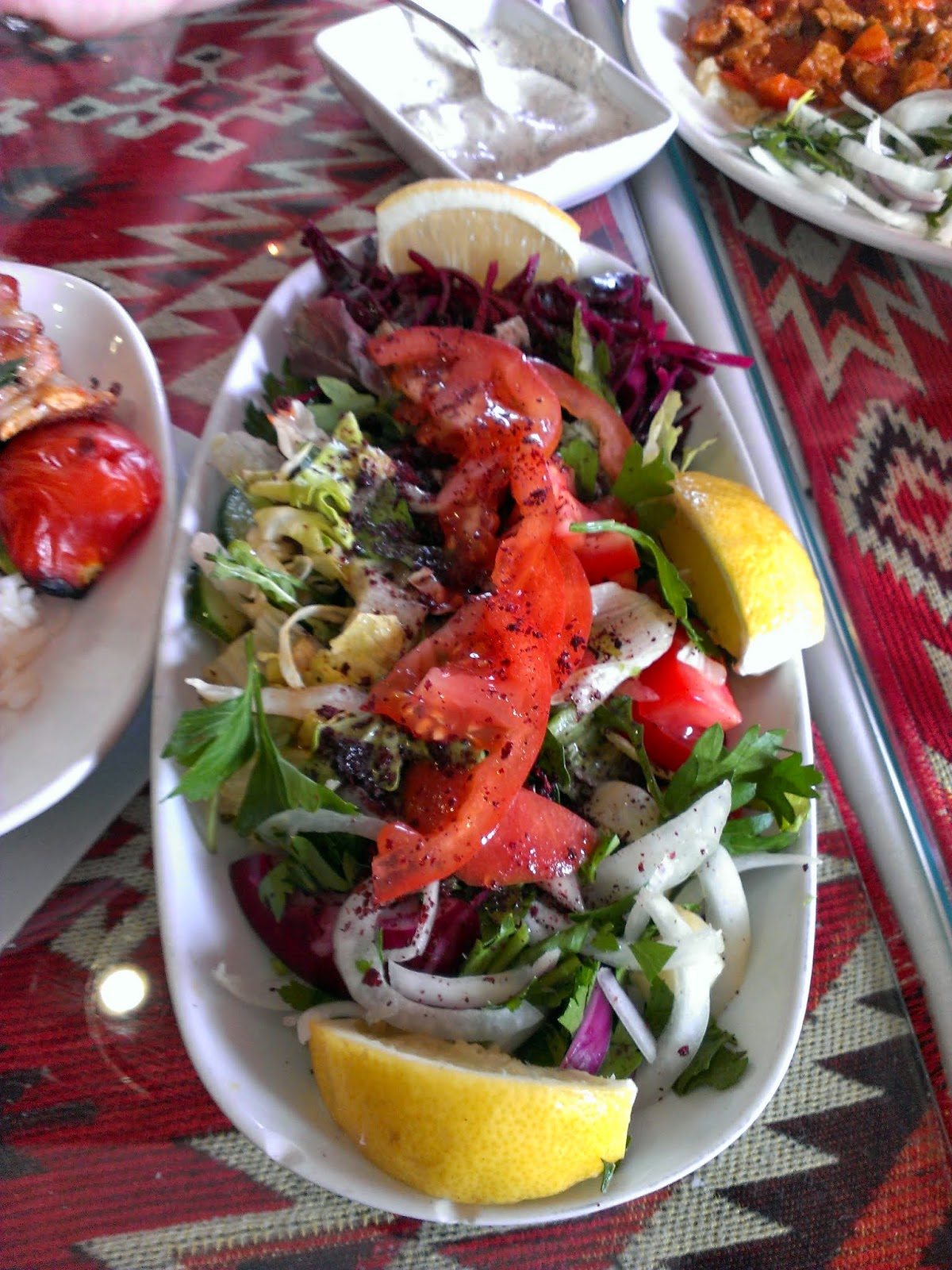 Tucked away, before you reach the kitchen, was a large open grill where, a rather unfortunate, given the stifling weather, man sat sentry over an array of skewers of different meats, vegetables and fish. His labours were worth it because it was all - especially the lamb ribs, that I am still fantasising over a fortnight later – fabulous. 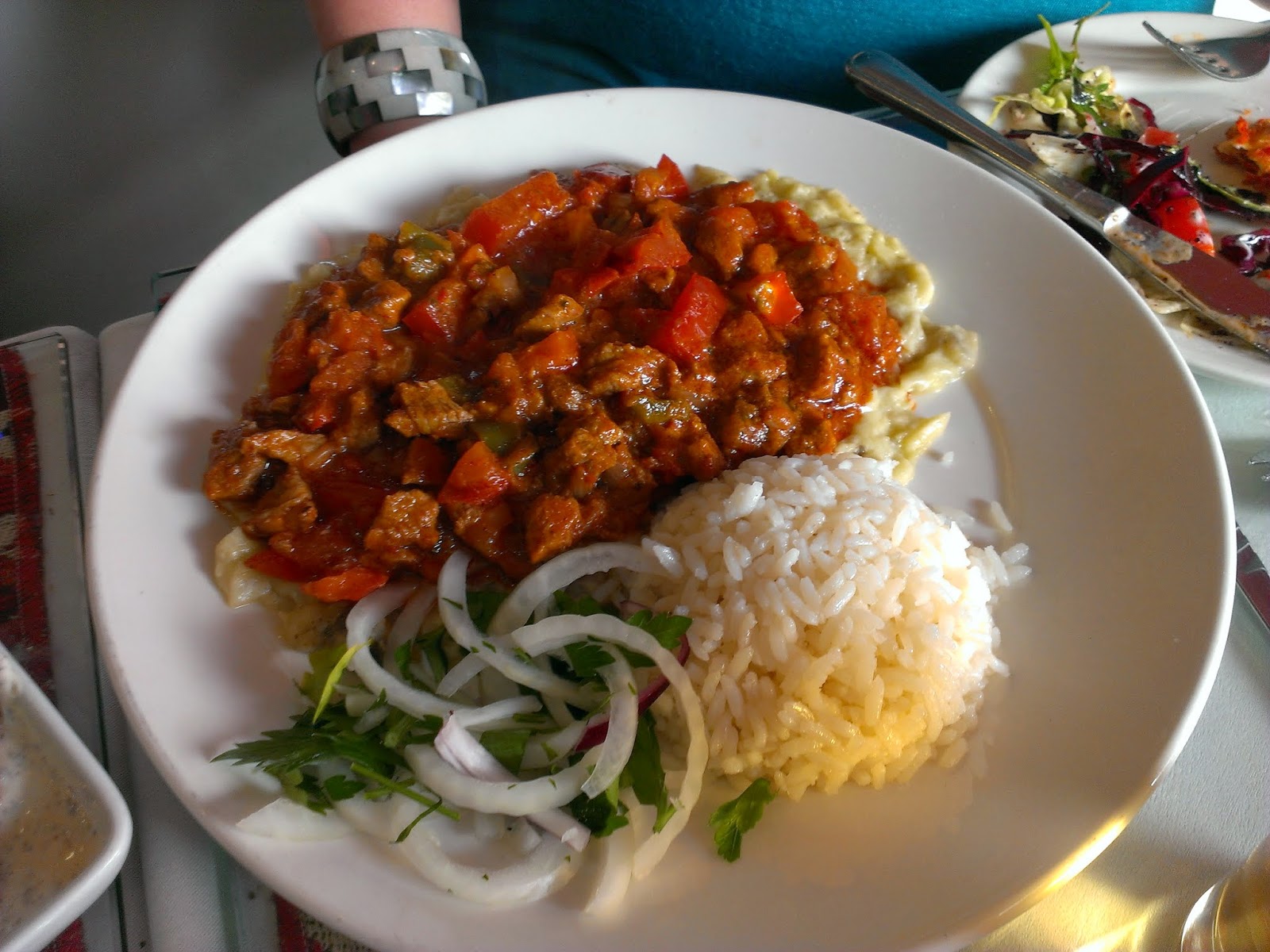 Maz chose another humdinger, with the Hünkar Beğendi, or Sultan’s Delight. This was a plate of lamb, stewed lightly in a tomato sauce, on a bed of impossibly glorious aubergine. There are few things as wonderful in life as a aubergine cooked just right (often a tricky thing), and this was silky, oily and smoky, with no hint of the spongy, bland bitterness that can often blight it. 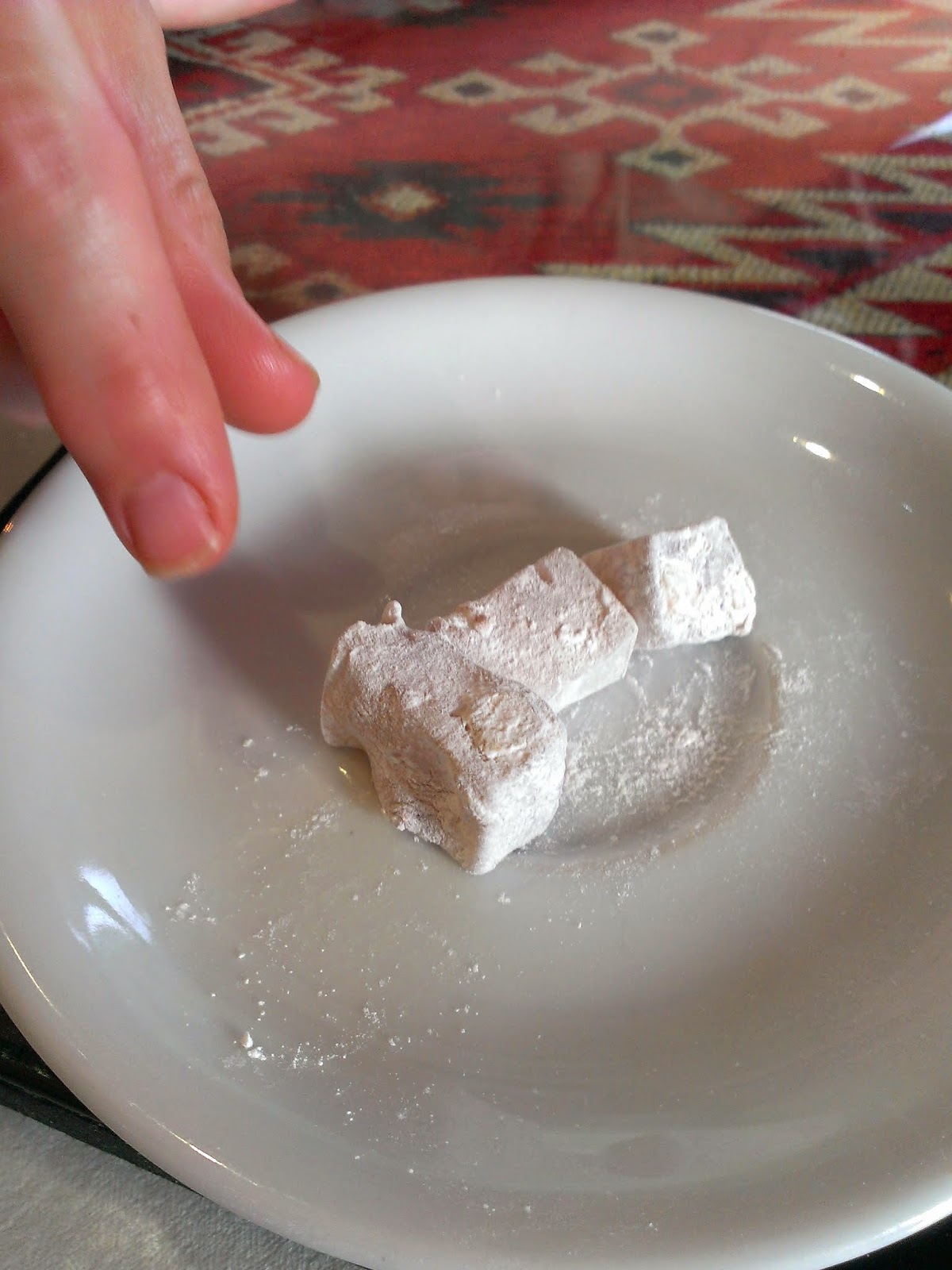 While it looked for a while as if we would be needing a doggy bag, the Ewing diligently persevered until just a heap of bones and sticky fingers remained. There was even enough room for a thick, strong coffee and a few morsels of traditional Turkish sweetmeats. The perfect end to a 'delightful' evening.
Posted by Amy at 20:35