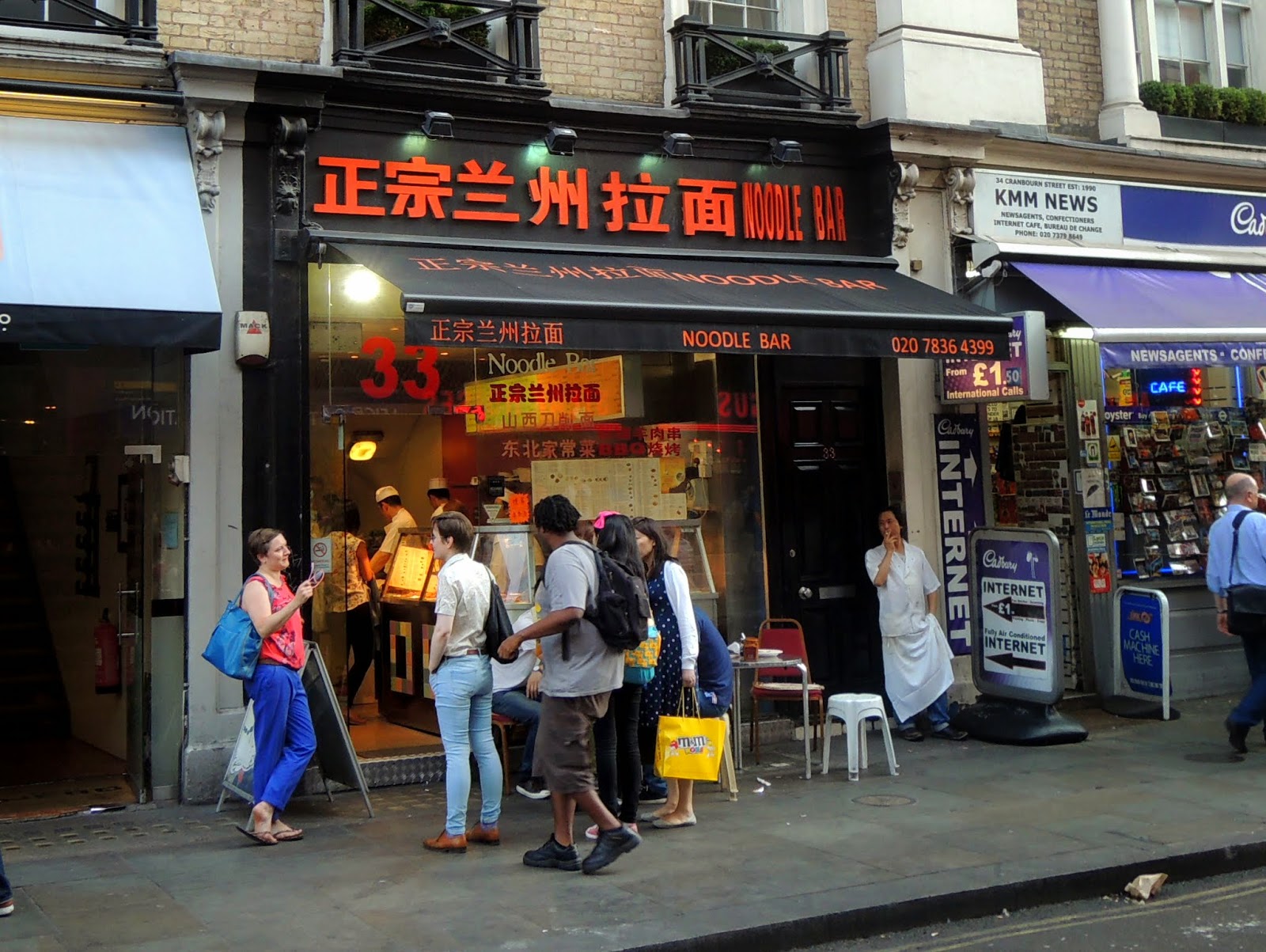 A couple of weeks ago, as a precursor to Stealth's unbirthday trip to the Proms, I decided to treat her for dinner at a cheap, unlicensed and un-air-conditioned dive in the heart of tacky tourist central. No one can say I don’t push the boat out. 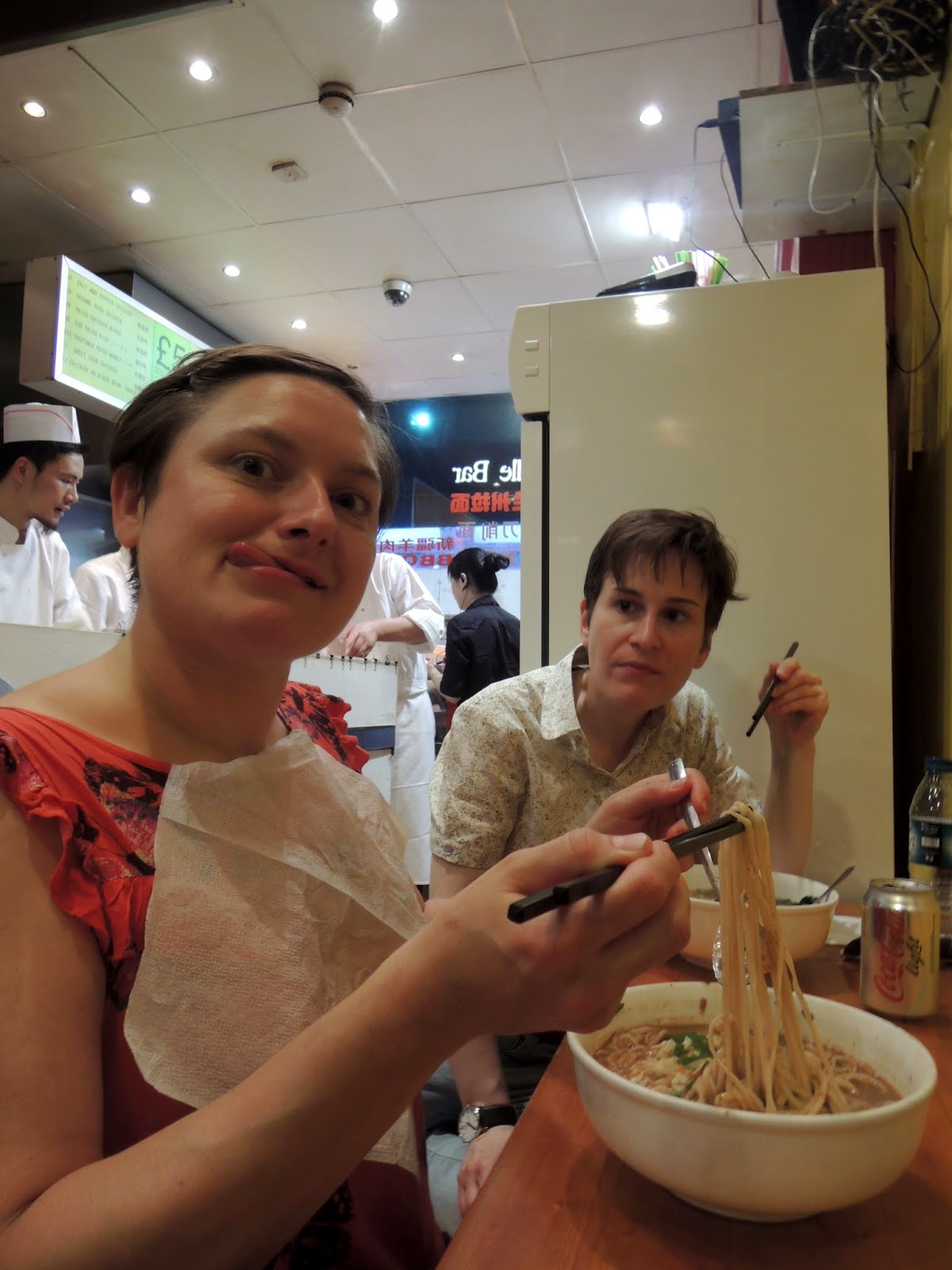 There was a brief moment, when I was trying to, literally, push my way from Piccadilly Circus to Leicester Square, when the mercury was still hitting 30 at six in the evening and most of London had decided to descend upon Theatreland, where I questioned my own sanity on suggesting such an idea.

But, despite the crowds and the heat and inauspicious frontage of the place – just look for the sign that says ‘noodles’ – I knew that at the back, past the trays of luminous sweet and sour and chow mein and fug of steaming dumplings, that Stealth’s spicy noodle urge would soon be sated. 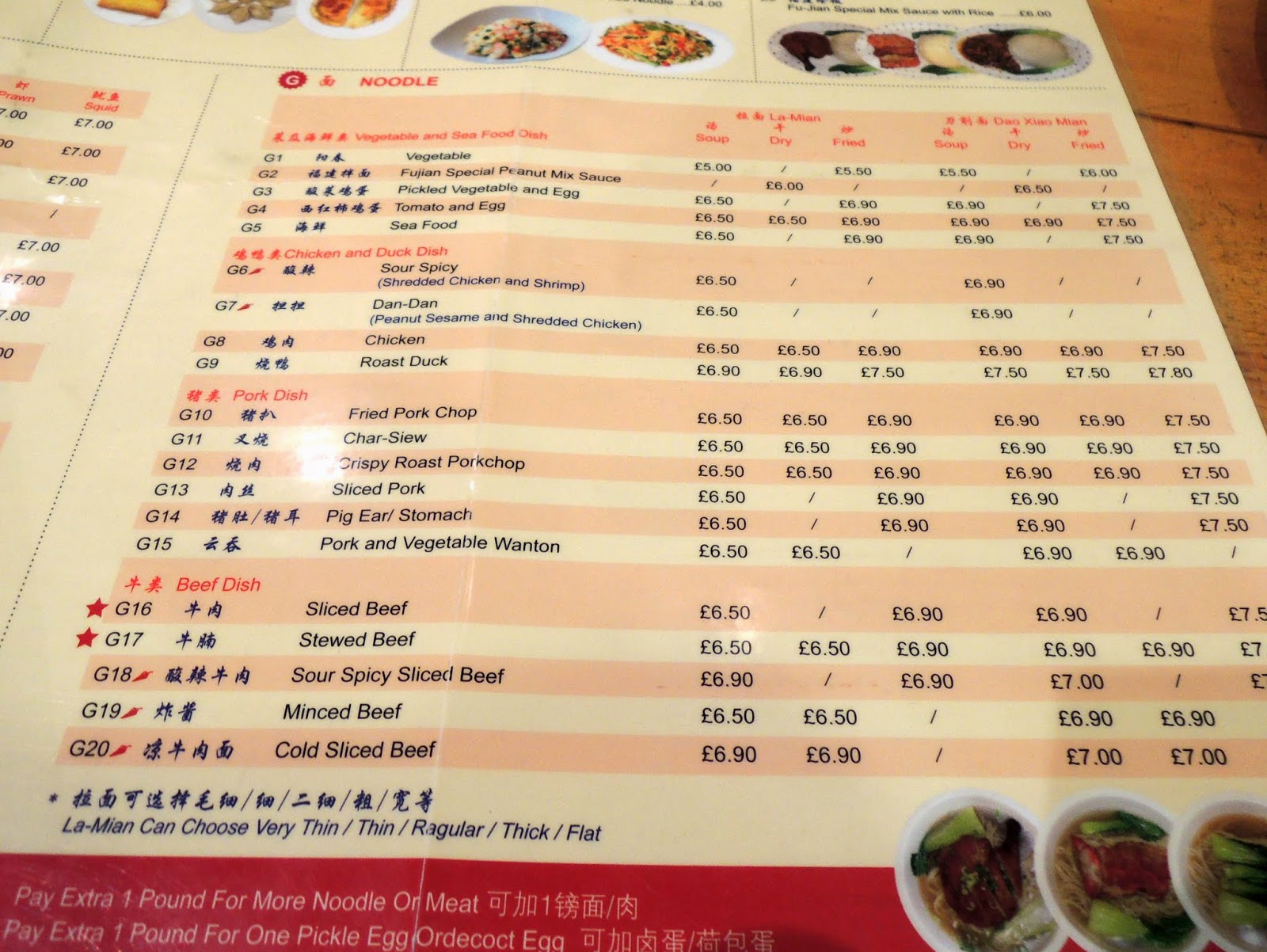 Typically, despite the address and link to Google maps being provided, Stealth had decided to trust her own sense of direction and was waiting at the other noodle bar opposite the other entrance of Leicester Square tube. Something that was comical when recounted later, but didn’t seem quite as amusing as we were sublimating on the pavement.

Troops successfully reconvened, we were hustled by the staff waiting on the pavement outside to the cramped seating area at the back and presented with, helpfully illustrated, laminated menus. There's plenty to chose from, but ignore all the standard glop that sits in trays under heat lamps, the handmade noodles are the real draw here. 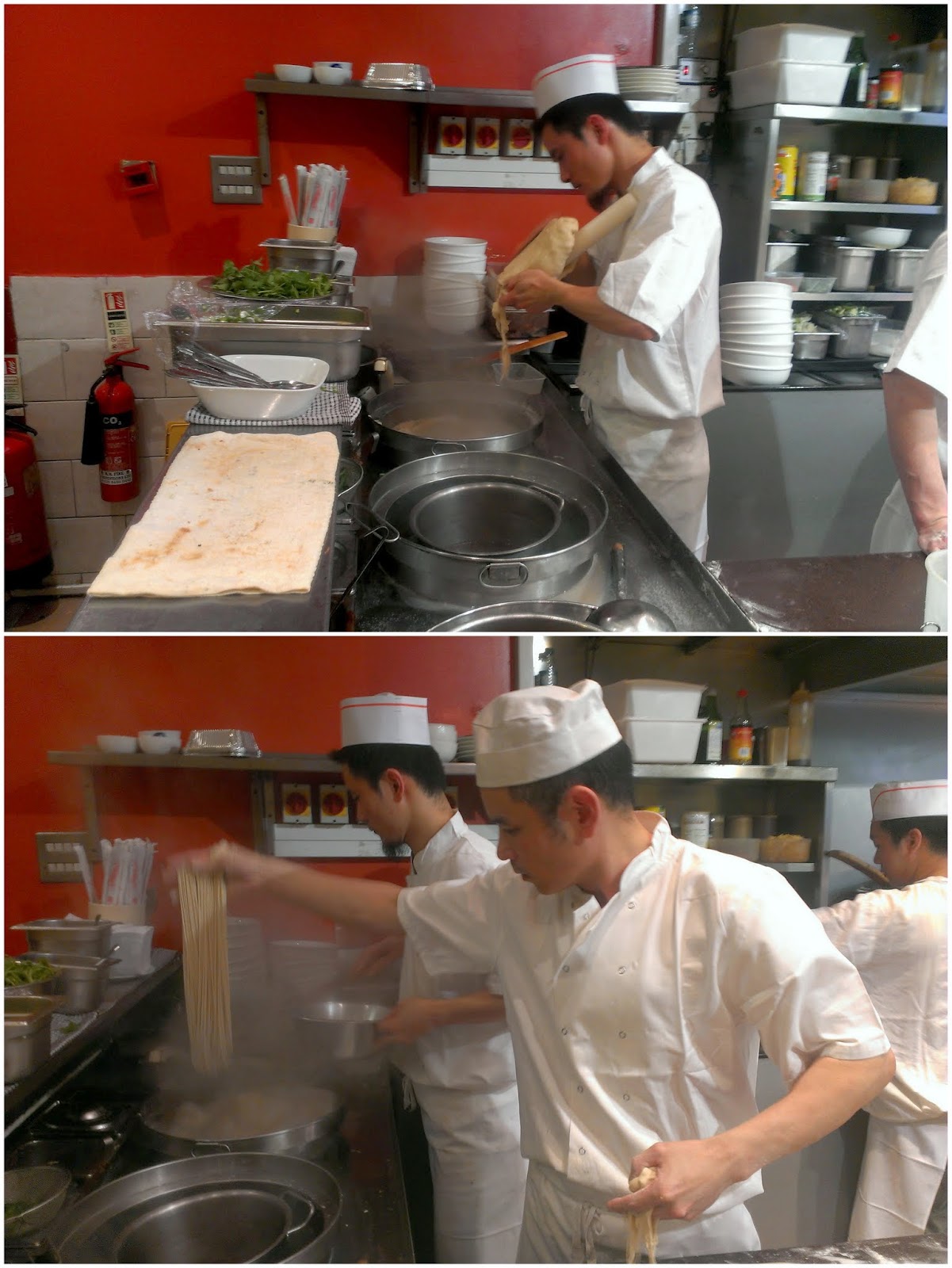 These noodles come in two varieties, la mian, the thin, hand pulled variety, and Dao Xiao Mian, which are shaved from a big ball of dough, wrapped round a stick, straight into the steaming stockpot. Both these types can be ordered in soup, dry style or fried, and then topped with various meat, fish and vegetables.

From the little ledge along the side of the restaurant, where we were perched, we had a prime seat to one of the best shows in town, watching enthralled at the lengths of oil dough being expertly twisted and tossed into the air until they split into tiny, glistening threads that were dispatched straight into the bubbling broth. 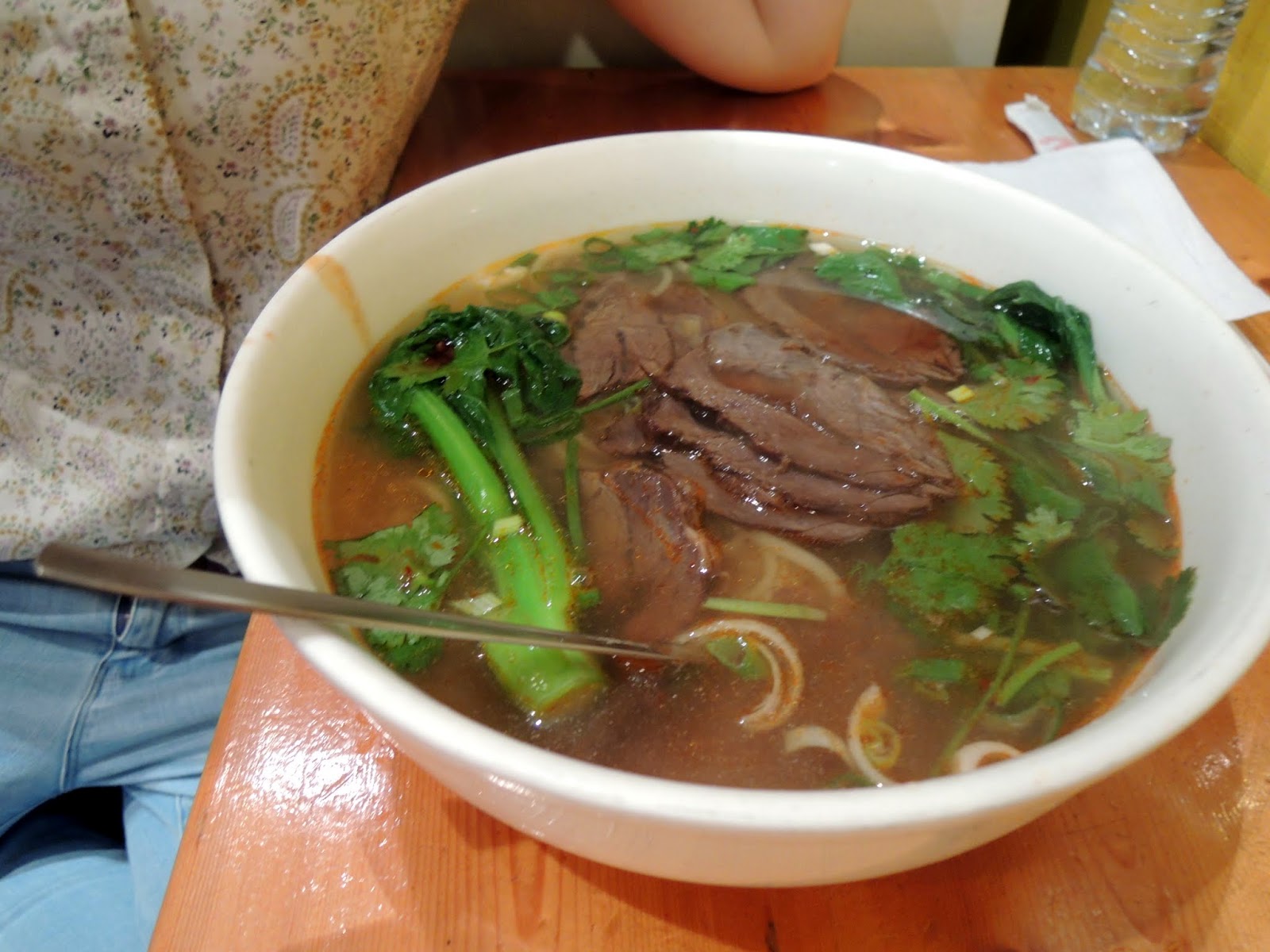 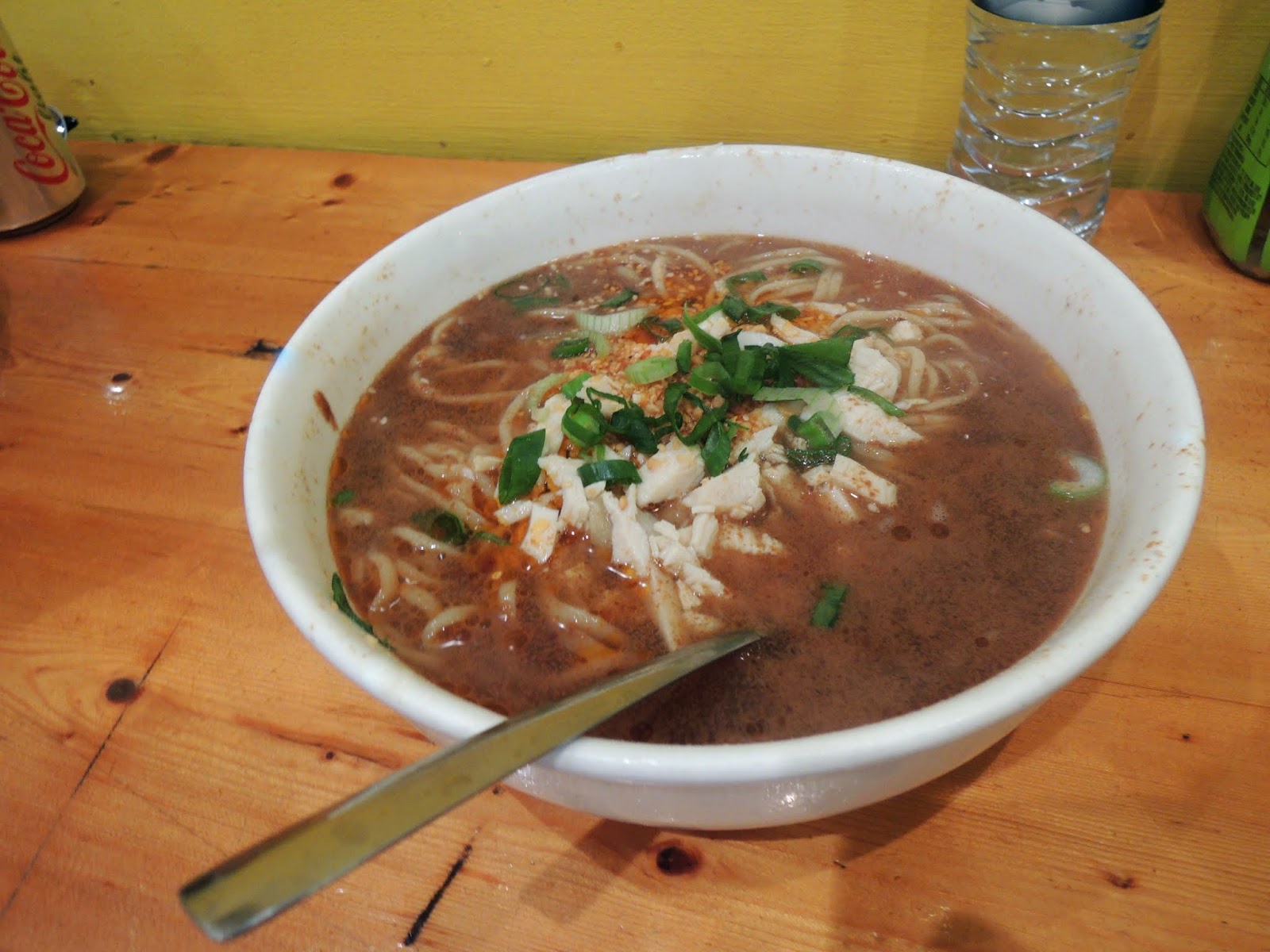 Minutes later and our steaming bowls were in front of us; hot and sour beef with la mian for Stealth, Dan Dan noodles with la mian for the Ewing and crispy pork chop with fried Dao Xiao for me.
The la mian were springy and toothsome, just like a good noodle should be. Stealth’s soup was pleasingly piquant, full of strips of tender meat and greens while the Ewing’s Dan Dan rendition had a flavoursome broth topped with plenty of porky, nutty sauce. 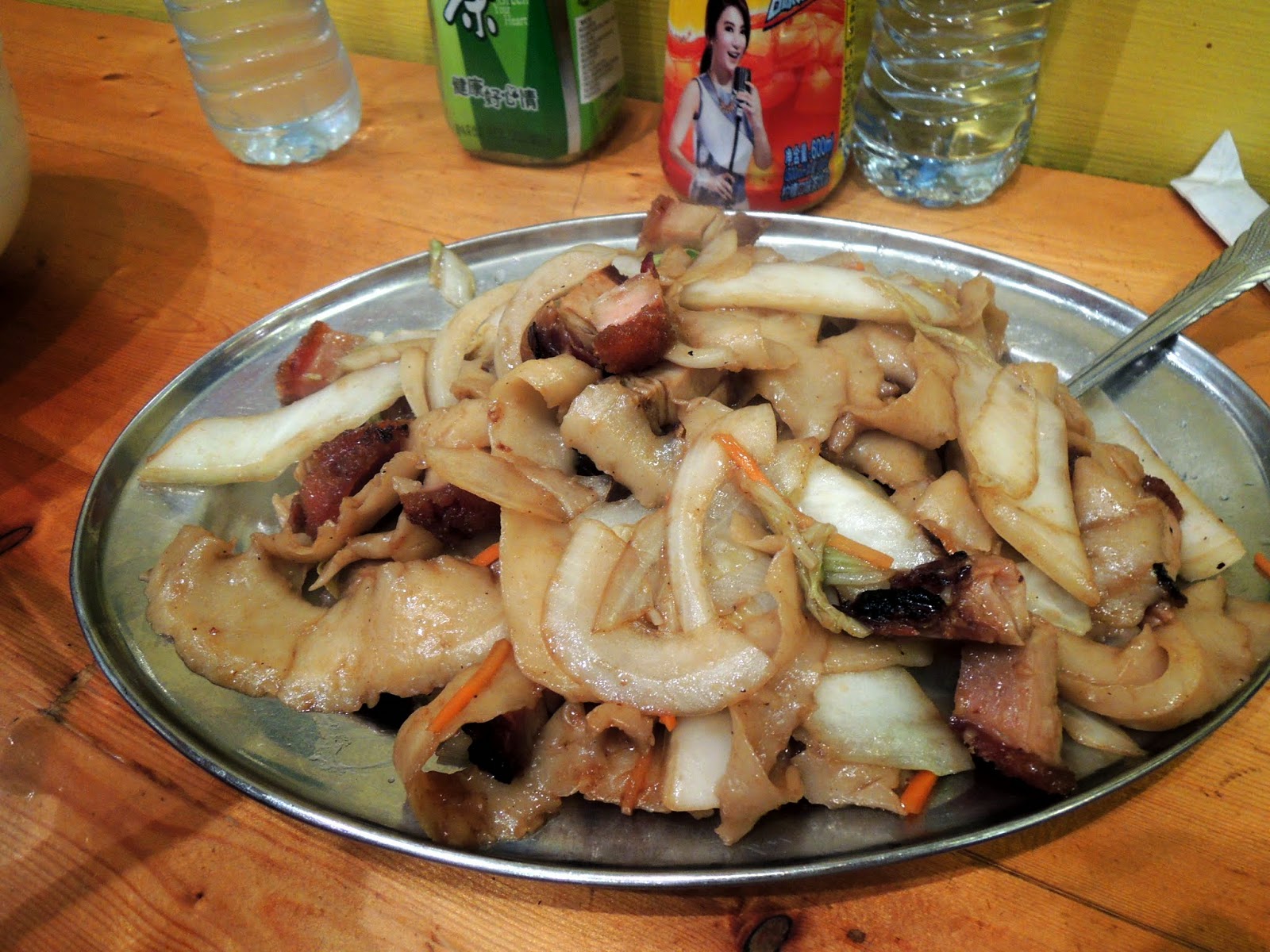 My platter - literally, a vast metal tray- was piled with crisp cabbage and onions and chunks of juicy pork chop and studded throughout with comforting noodle chunks that were chewy and stodgy, in the best possible way.

Noodle mains are decently priced, between £ 6-£7.50, and the portions are gargantuan. For the adventurous there is also a huge menu of side dishes that includes various preparations of tripe, liver and tongue alongside cucumber served with pig’s ears, and stomach of duck in red oil. 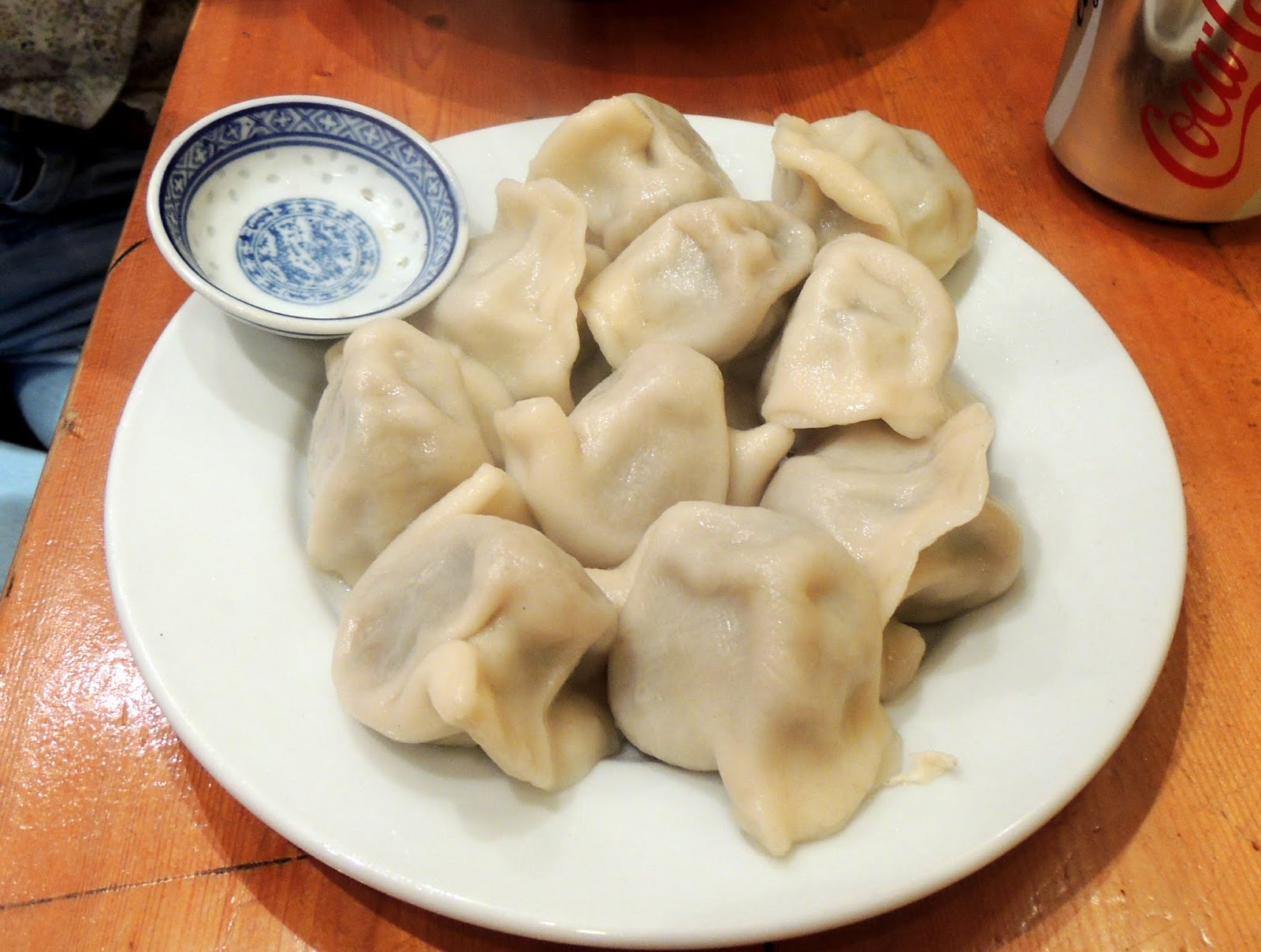 We also ordered a plate of steamed dumplings stuffed with pork and Chines chives – superfluous, but rather forced on us by our brusque, but amusing waiter – which were very good.  The handmade wrappers encasing the centre were delicate and light with the inside being fragrantly allium-spiked and beautifully juicy.

It isn’t licenced, they don’t offer tap water, service is comically curt and pushy and there is barely room to swing the noodles, let alone anything else, but Zhengzhong Lanzhou Lamian Noodle Bar has a curious charm as well as damn fine noodles. 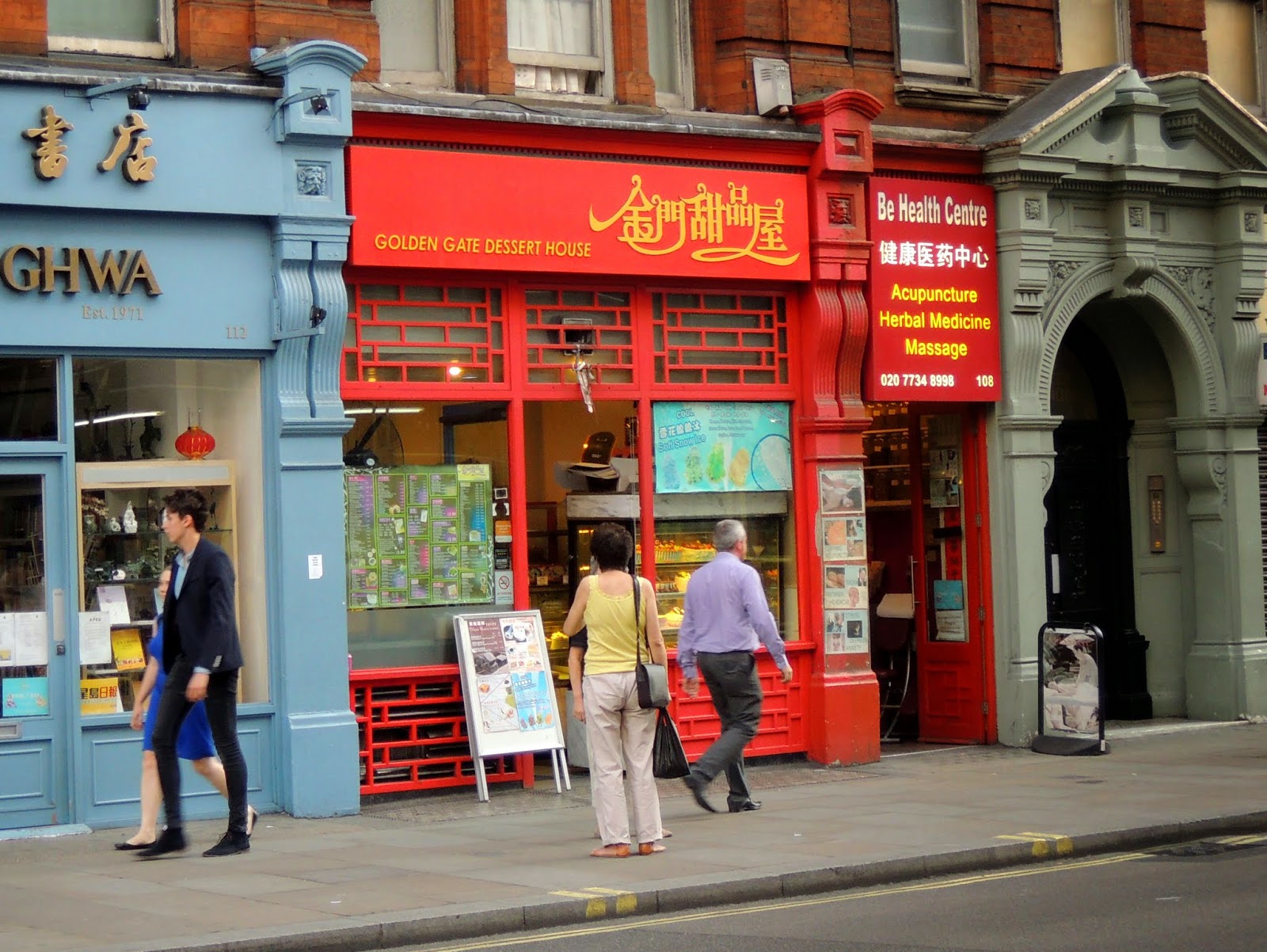 To round off the un-birthday treat, our final stop was intended to be the Golden Gate Desert House on Shaftsbury Avenue but time dictated we had to Go West (thanks to Stealth’s boss) to the Royal Albert Hall. No matter, as we had the chance to go back the following evening before returning home, although sadly sans Stealth this time.

Again, it’s not a fancy gaff, although the elaborate range of cakes and gateaux’s in the window at the front and the chilled cabinet inside are properly swanky. The Ewing went for the chocolate mousse layered sponge, complete with strawberry frog topper who was sadly blinded in an unfortunate accident on the trip home – while I picked the impressive pandan cake. 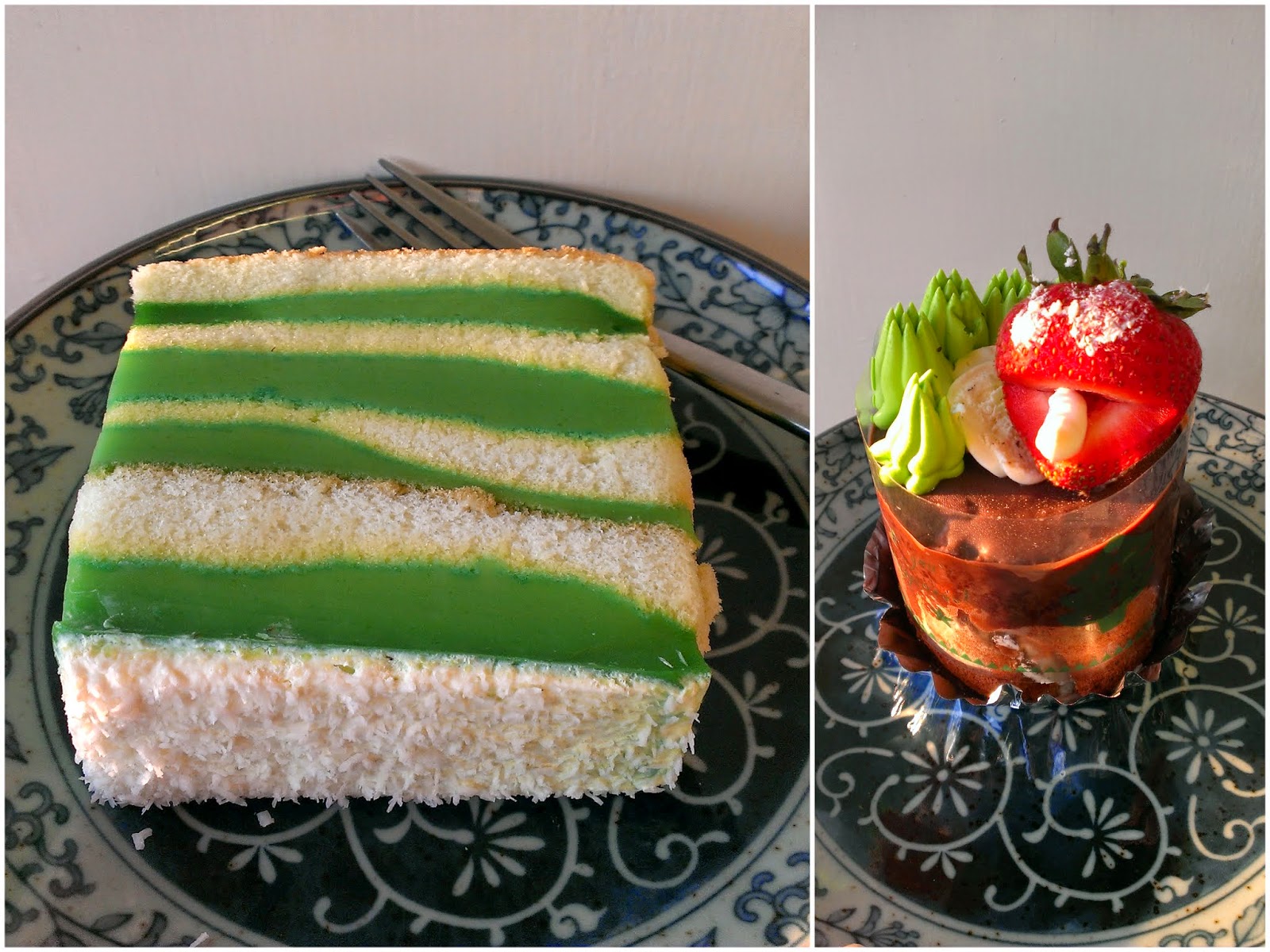 I love the flavour of pandan, and this, with the layers of lurid green jelly, fluffy sponge and coconut cream, was like a rather exotic children’s tea party. The Ewing pronounced her cake as ‘light as air’ although you’ll have to take her word for it as not much remained for me to corroborate.

The bright purple taro mousse cake also looked particularly intriguing and is top of the list for a return visit, They also stock a small range of pork, cheese, spring onion or sausage stuffed savoury buns, lotus cakes and moon cakes as well as dramatic, many layered, cream and fruit topped celebration cakes for all occasions. 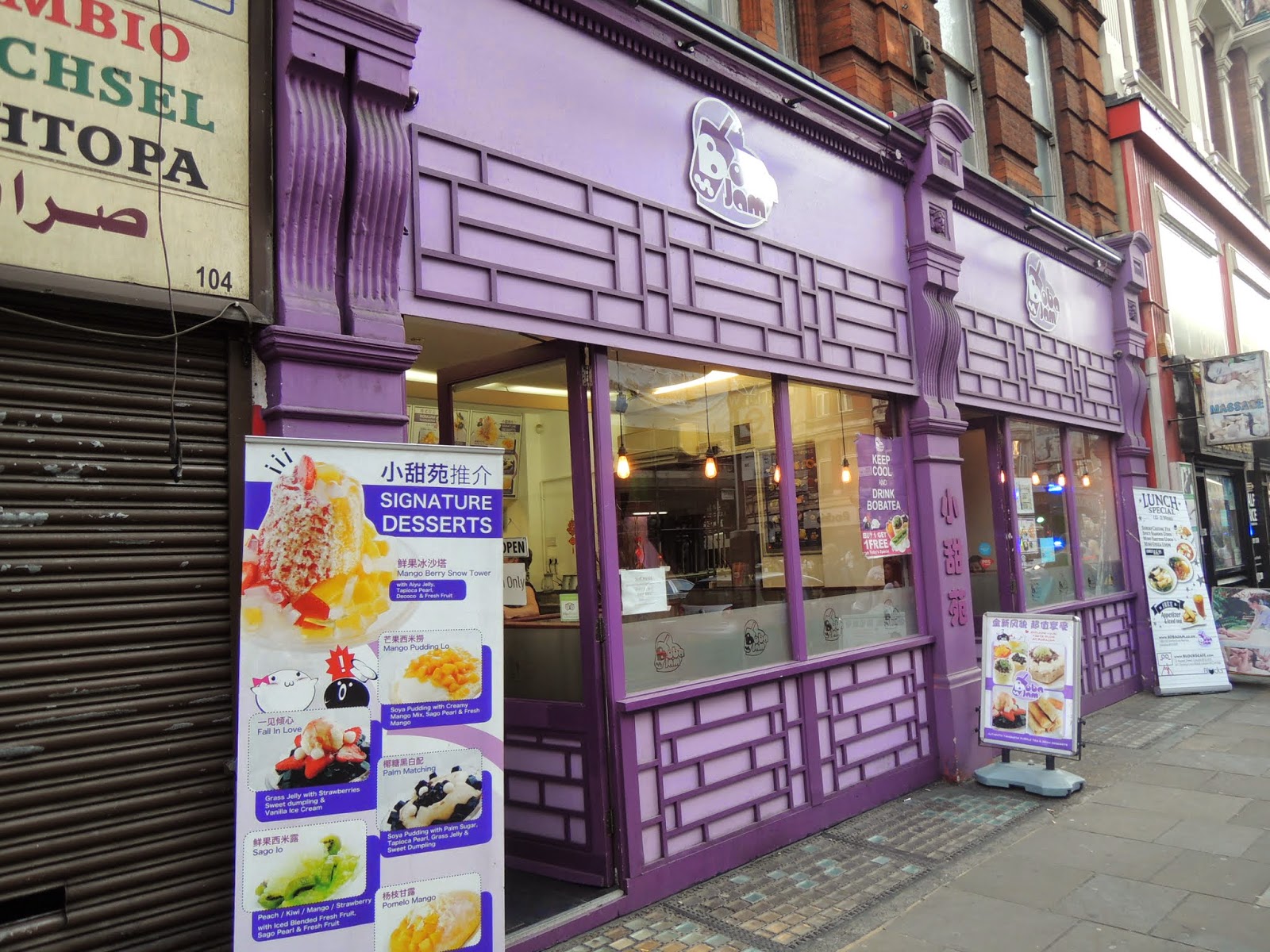 Still sweltering in the sultry City heat wave our last stop was Boba Jam, two doors down from the Desert House. Here they serve a small variety of South east Asian/Chinese deserts – mostly involving strange flavoured fruit, beans and seeds – and a selection of savoury snacks, but the biggest lure is the range of Boba tea and fruit jelly drinks. 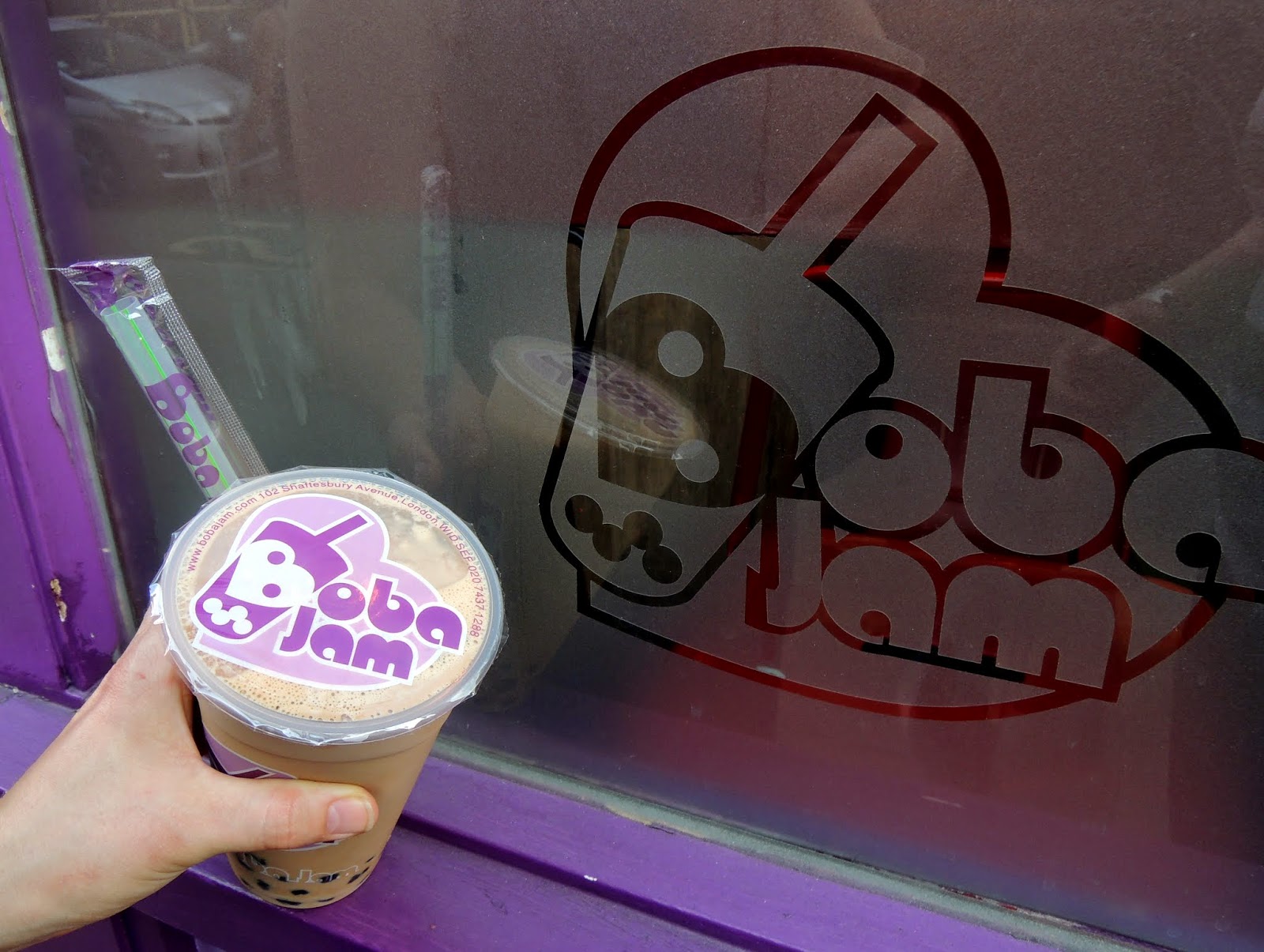 We played it safe with the Hong Kong style – a strong black tea with condensed milk – served with black tapioca pearls and lashings of ice. Everyone knows that you can’t have an un-birthday without tea and cake, and this was the perfect finale. Here’s to Stealth’s next 363 un-special days.