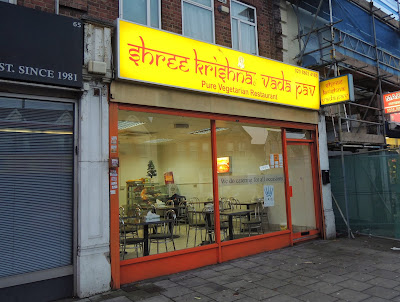 After battling the traffic on the M27/M3/M25 to drop Grandad back home in NW London after a rural Christmas at my Mum’s there isn't much to beat the post-festive treat of a good curry. It's just the tonic to aid recovery after a few days with the tweed and red-trousered hunting set in deepest darkest Wiltshire, followed by a few hours cooped up in the car with close family.

Another advantage of ending up in this neck of the woods, as can be seen from last year’s feast, is that there is a lot more variety beyond the standard North Indian Pakistani fare most of us are more familiar with.

Again we ended up choosing a vegetarian restaurant - a salve after the endless stream of roast beef, goose and turkey - the snappily named Shree Krishna Vada Pav, on station road in Harrow. Although, with many of the dishes on the Mumbai/Chowpatty Beach inspired menu being well acquainted with the deep fryer or lashings of butter (sometimes both) before making it to the table, it’s not quite as parsimonious as you might think. 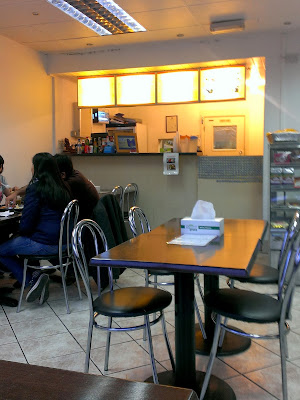 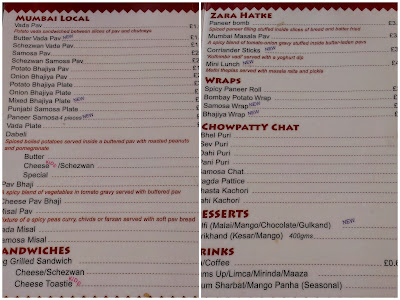 This is a no frills gaff - complete with wipe down tables, laminated menus and boxes of value tissues on each table - but it’s bright and clean and clearly very popular.

Luckily a small group had arrived just before us, so we could observe the protocol. After grabbing an unoccupied table and consulting the menu (there are a few helpful pictures alongside, with more on their website if you become as confused as we did) food is ordered and paid for at the small counter before being freshly prepared and and bought to your table when it’s ready. 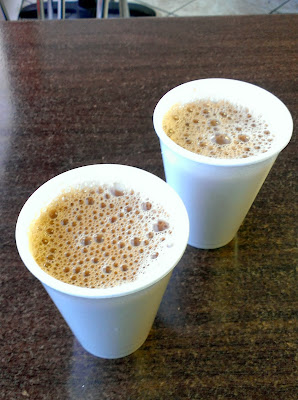 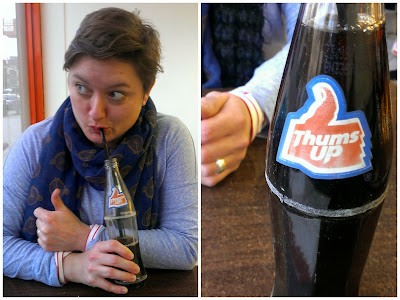 We also ordered drinks; a well needed, sweet and milky Chai (served in a polystyrene cup, but at 60p I wasn’t complaining) and a glass bottle of cold Thums Up cola.

Thums Up is an Indian soda (originally set up as a rival to Cocoa Cola, but now owned by the brand) with a distinct spiced note. To me it tastes how cola should taste, rich, strong and spicy – it’s marketed in India as a ‘manly’ beverage – that cuts through all the grease, carbs and heat of good street food. I got a thumbs up from the Ewing, too. 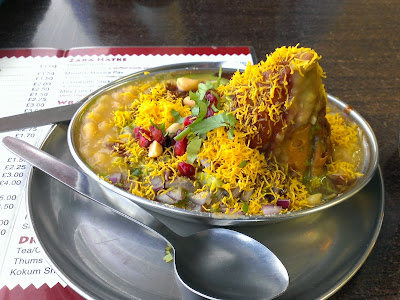 The first dish out was Samosa Chaat; This was a picture on the plate with its volcano of crisp samosa rising from a lake Tamarind sauce, chutneys, curried peas and sweetened yoghurt,  all topped with pomegranate seeds, red onions and crispy sev (small crispy noodles).

Not only did this look the part, but it delivered on taste too. A harmonious riot of different flavours and colours, I particularly enjoyed the friable pastry of the samosa and the pleasingly fresh pop of the pomegranate. One of the tastiest dishes I've eaten for a while. 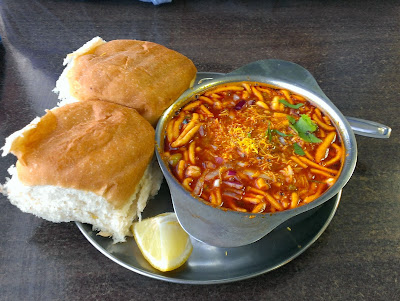 Misal Pav Spicy Curry was a thin gravy, made with sprouted lentils, chick peas and chilli powder, served on top of farsan (an assortment of fried noodles), finished with onions, coriander and lemon and served with more pav. Apparently this is often served for breakfast; a sure fire way to wake yourself up in the morning.

This is a properly spicy dish, as highlighted by the 'tarri', or mixture of chilli powder and oil, that you can see on the surface of the gravy. While it proved rather too much for the Ewing's more delicate constitution, for me it was perfect, and also very moreish. Every time I thought I was finally defeated, I was compelled to take just one more spoonful.

Amusingly for the Ewing, the effects of all that spice weren't lost of the lady serving us, who, on clearing our table, asked if I was ok after noting my puce complexion and copious amounts of spluttering nose-blowing. 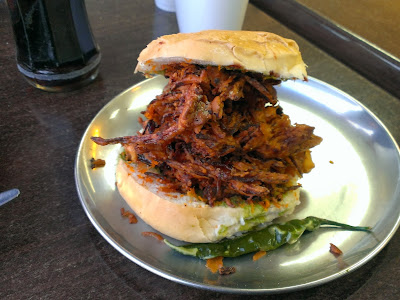 Onion Bhajiya Pav came as a towering mountain of crispy, gram battered onion stuffed into a pav roll. The bread had been generously covered in a tangy, spicy chutney and extra heat came from a blistered green chilli served along side.

Although it may seem a little strange to stuff a bhaji into a bun, this follows the same principles as another great snack - the humble crisp sandwich. The contrast between soft and crunchy, with a little added spice, was perfect. 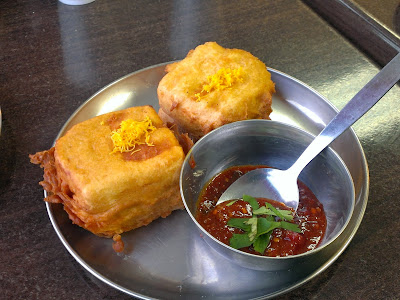 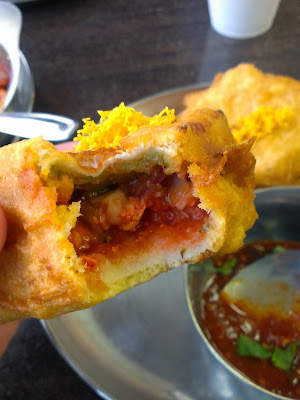 Finally, the ominous sounding, Paneer Bomb - Paneer cheese cooked in a tomato-y sauce and stuffed inside two slices of bread before being battered and deep fried. Like a sort of mega toastie, this was lighter than it sounded and worked very nicely when liberally dipped in the spicy ketchup served alongside.

With a - appropriate for the Festive Season - nice rosy glow from our lunch and change left from a twenty, Shree Krishna Vada Pav proved the perfect antidote to the prospect of leftovers overload.