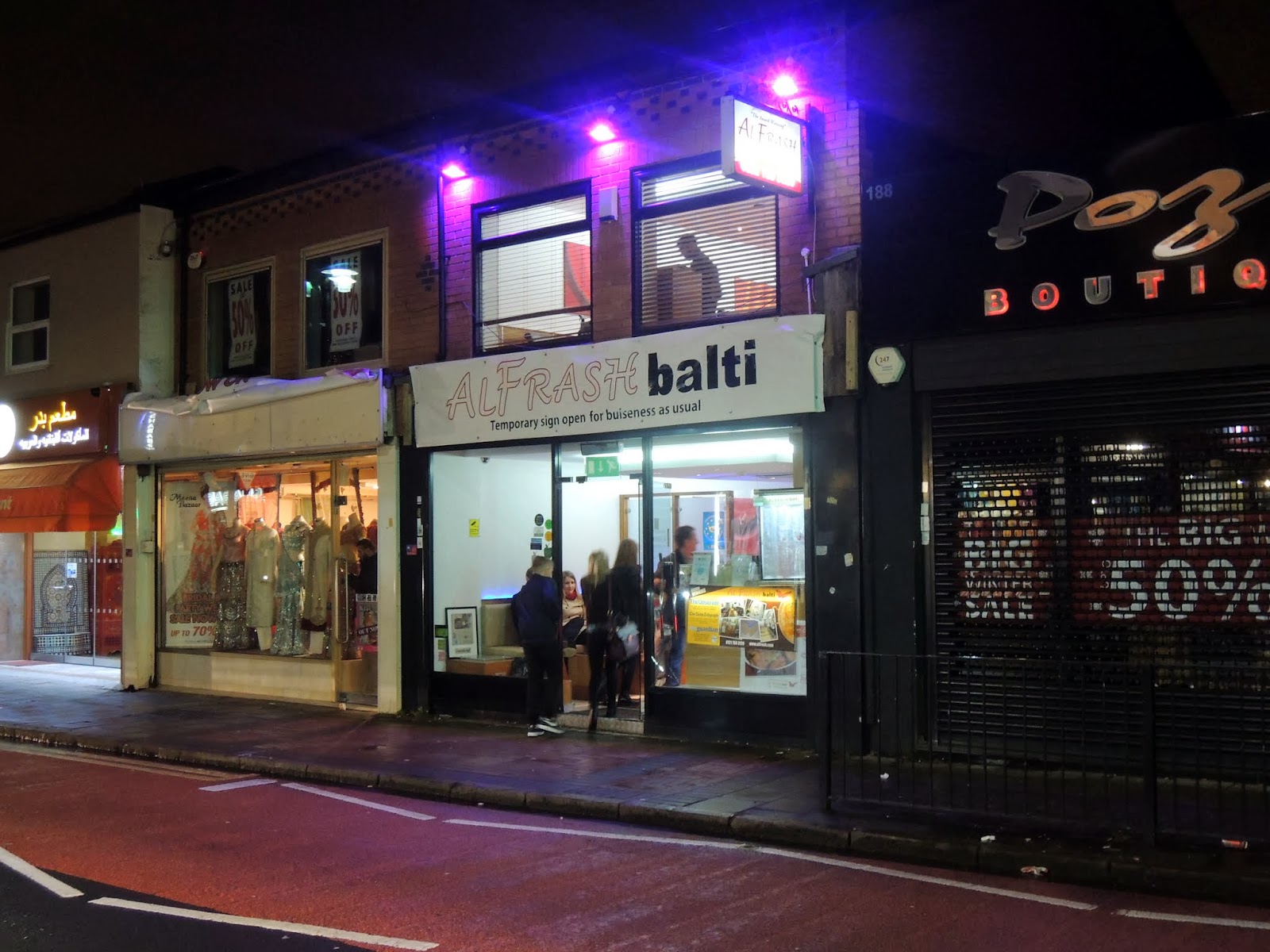 Despite many visits to the Second City - whether to see Stealth when she was at Uni here, or with Pavematt, whose family came from Wolverhampton; work trips to Peter's in Chinatown or jaunts to the Symphony Hall and the Christmas Market - I had still never made it out as far as the Balti Triangle.

The triangle, so named because of the shape of the three main roads that border the area (Ladypool Road, Stoney Lane and Stratford Road), is the supposed home of the Balti curry. The origin of the name is, as with many of these things, disputed, but it's reputed to come from the Urdu/Hindi, or even Portuguese, for 'bucket', after the dish it is cooked in.

Unlike most other curries, the balti is served in its cooking dish. The thin steel bowl helps keep the dish hot, while the individual portions prevent any one else sneaking a spoonful. Perfect for someone like the Ewing, who finds sharing so hard, but bad for a scavenger like Stealth, who texted me just to share her dislike for balti when she knew I was off for a curry in Brum. 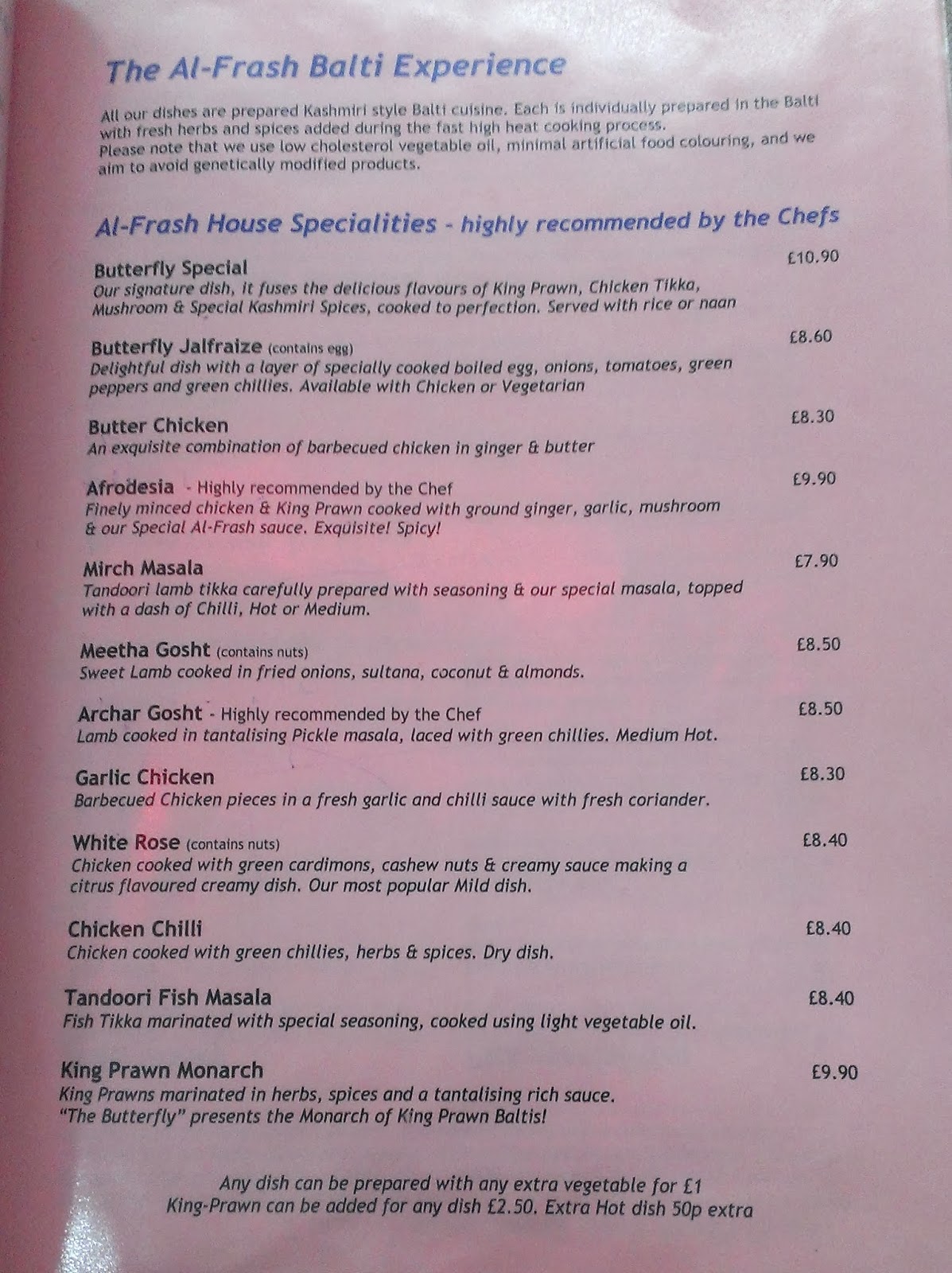 With over 50 restaurants to choose from in the area, I singled out a few with the most recommendations, then plumped for the one with the best sounding name. Scientific stuff, I know.

Al Frash, butterfly in Punjabi, is recommended as one of the top 50 curries in the Independent, a top cheap eat in the Observer and reviewed by Matthew Norman in the Telegraph. But, while all this glowing endorsement was good, the real litmus test would be whether it could satisfy after an afternoon on the pop in Birmingham's town centre. After sinking the dregs of our pints, we hopped in a cab and made our way to Sparkbrook to find out. 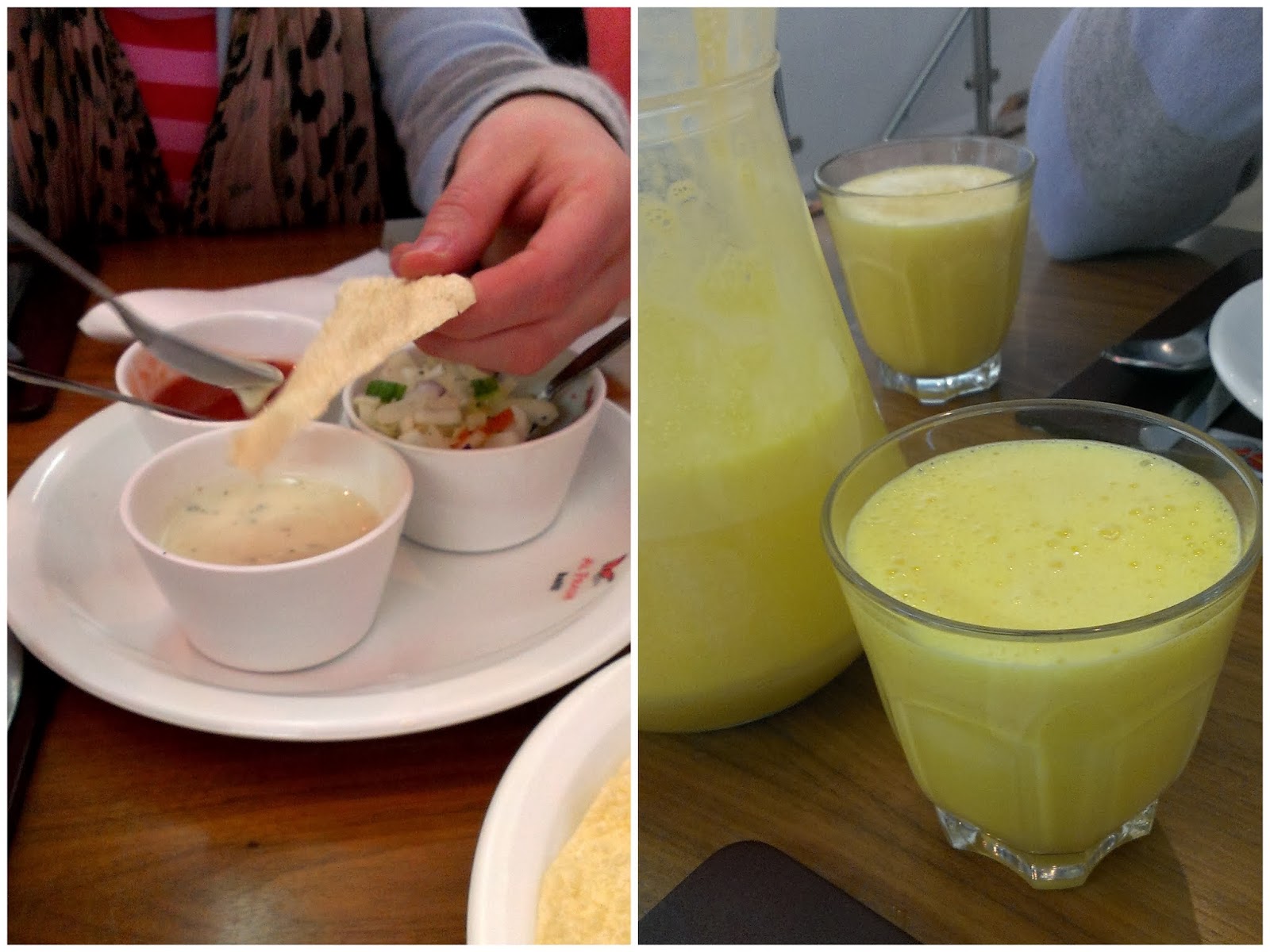 Dinner started promisingly with a brace of, gratis, poppadoms and a variety of condiments: a sweet and sticky red sauce; a eye-watering raw onion salad; and a, deceptively creamy-looking, number that turned up to be spiciest of all.

While the restaurant isn't licensed they are happy for you to bring your own, as evidenced by the carriers of six packs of Carling and bottles of Gallo's finest under the table, bought in from the offie next door. Already stalling slightly after our beer crawl, which had included pints of the Beowulf 'Killer' stout at 7.9%, we went for a jug of mango lassi.

Normally sweet yoghurt drinks aren't really my thing, this was a very good call; thick, fragrant and stomach-settling. As well as also offering the traditional sweet and salty versions they have an interesting sounding pistachio flavour on the menu. 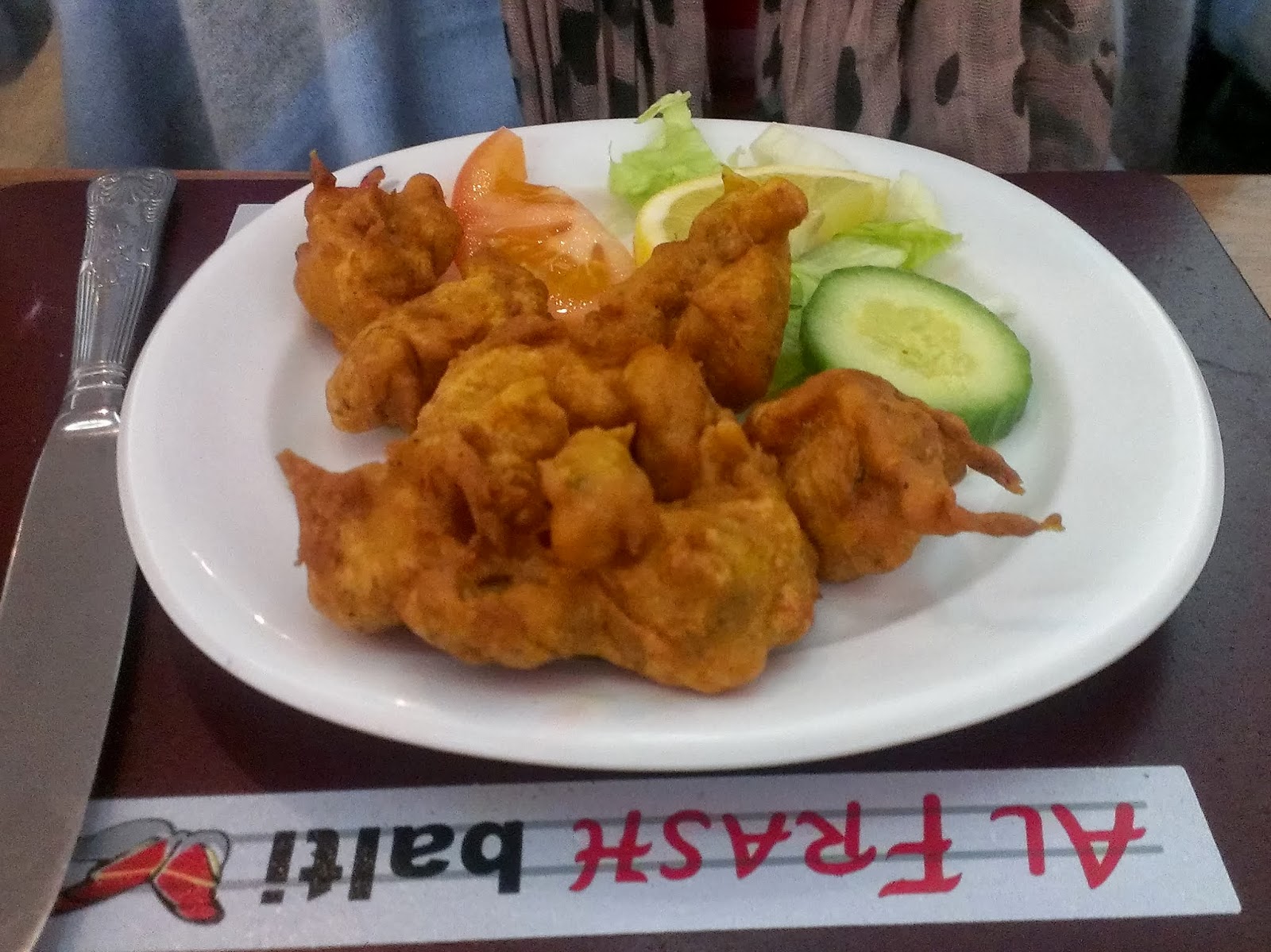 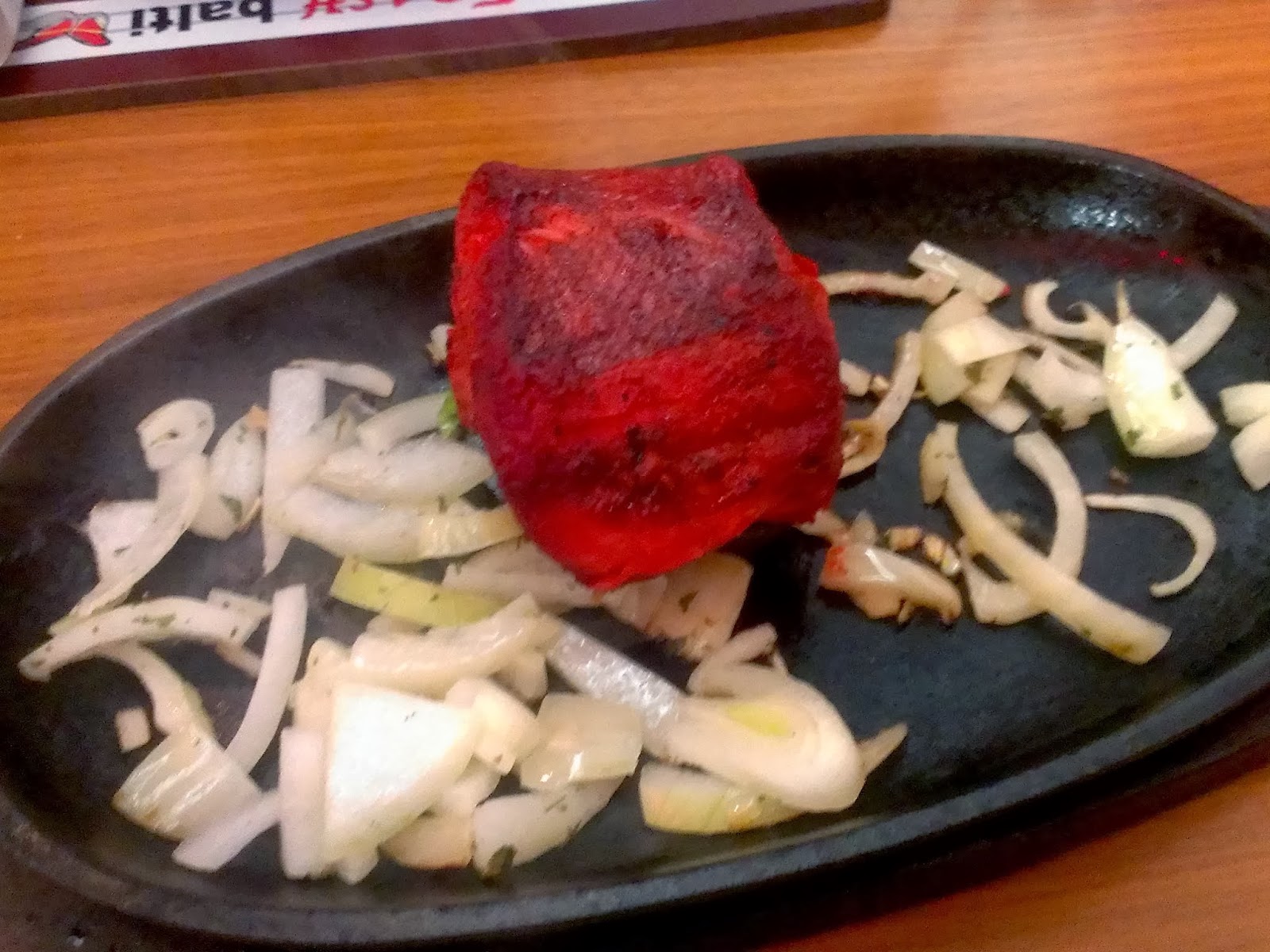 We shared a couple of starters; a pleasantly poky king prawn pakora, expertly fried in a light gram flour batter, and and a thick darne of silver hake, marinaded in a crimson spice paste and roasted in the tandoor. Both were simple and well executed, and at only £4.60 and £3.60 respectively, I regretted not throwing a sheekh kebab or two. 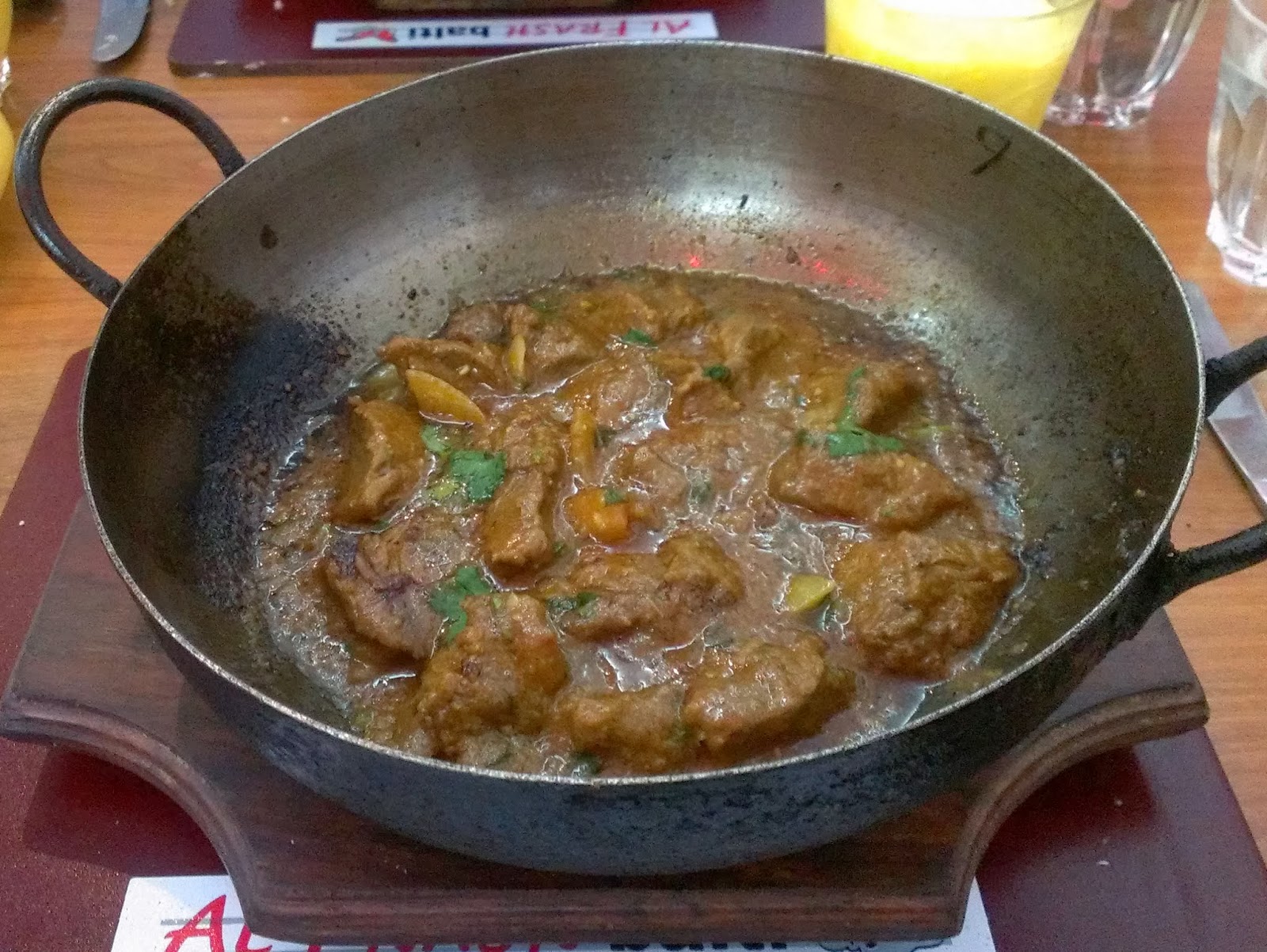 I went for the archar ghosht, lamb cooked in pickle masala with green chillies. The meat itself was faultless; sweet and sticky and shredding apart with the merest prod of my fork. In fact, the dish reminded my very much of my Mum's superlative lamb and pearl barley stew, wherein lay the problem....

While I was hoping for fire and brimstone - the acidic bite of pickle, fragrant spices and the pop of green chillies - the dish seemed strangely underpowered and rather oily, although it was pepped up with a splash of the hot yoghurt sauce. 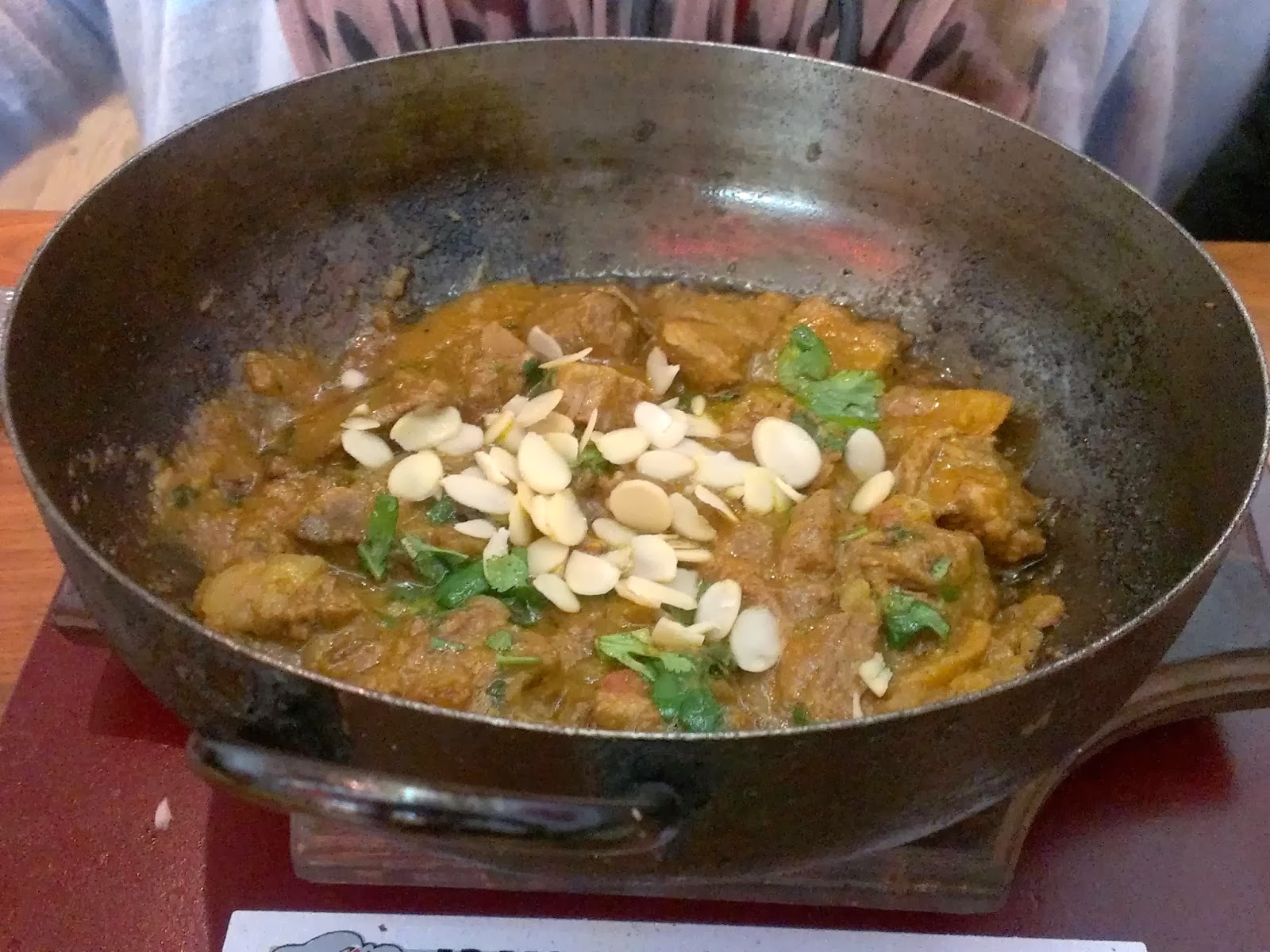 The Ewing fared better with her meetha gosht, the same tender lamb but this time cooked with onions and dried fruit and coconut, and finished with almonds for crunch. This seemed a better balanced dish, with its contrasting textures and flavours. And, while being a mild curry, it wasn't meek. 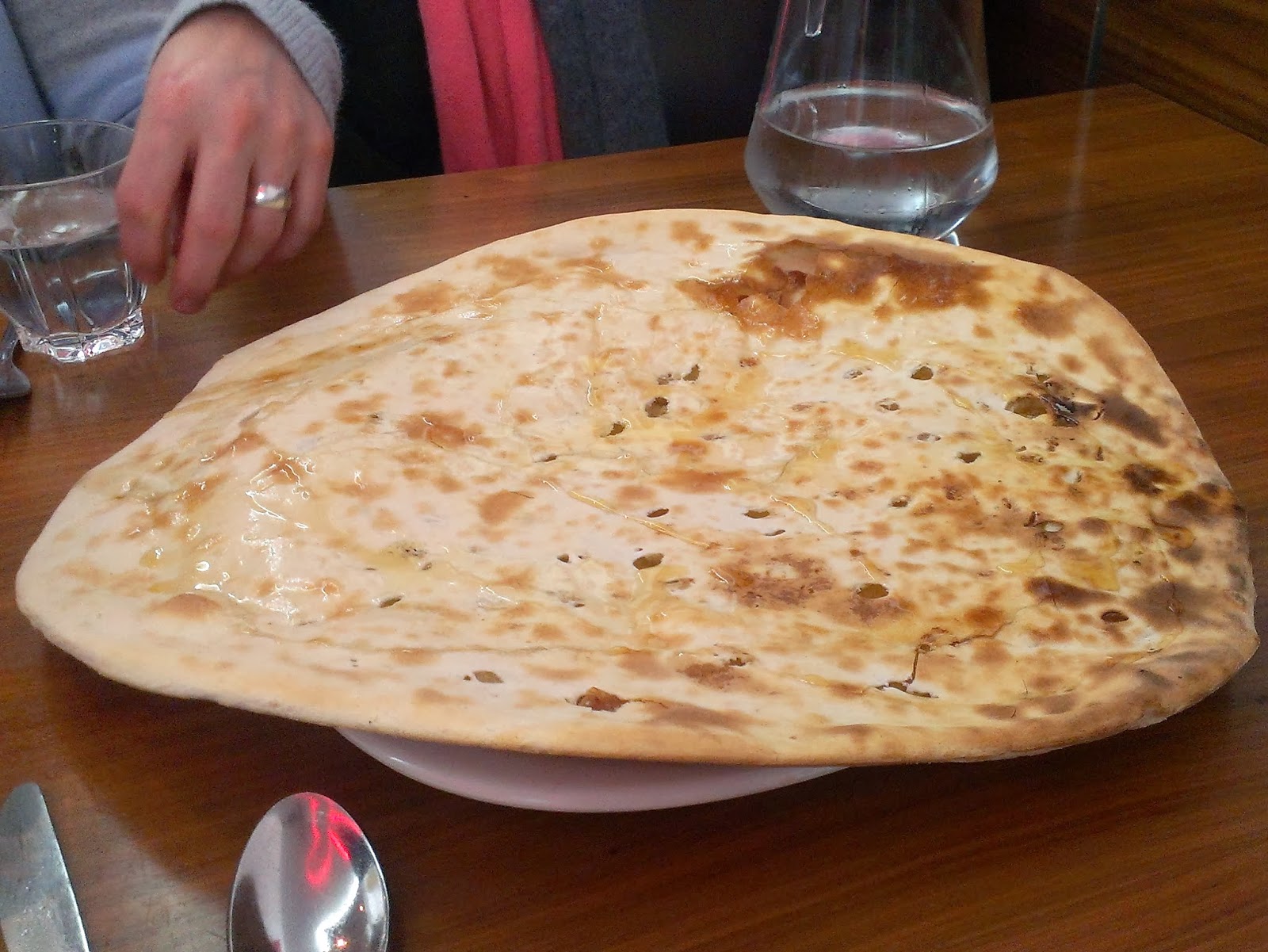 Our peshwari naan (medium, the large is a behemoth that drapes over the edge of the table) looked impressive - served stuffed with nuts and raisins and liberally drizzled with honey - but suffered from a odd cream cracker like texture, being more dry and crispy than soft and fluffy. Still, it was serviceable enough when ripped into chunks and used to scoop up the steaming curry. 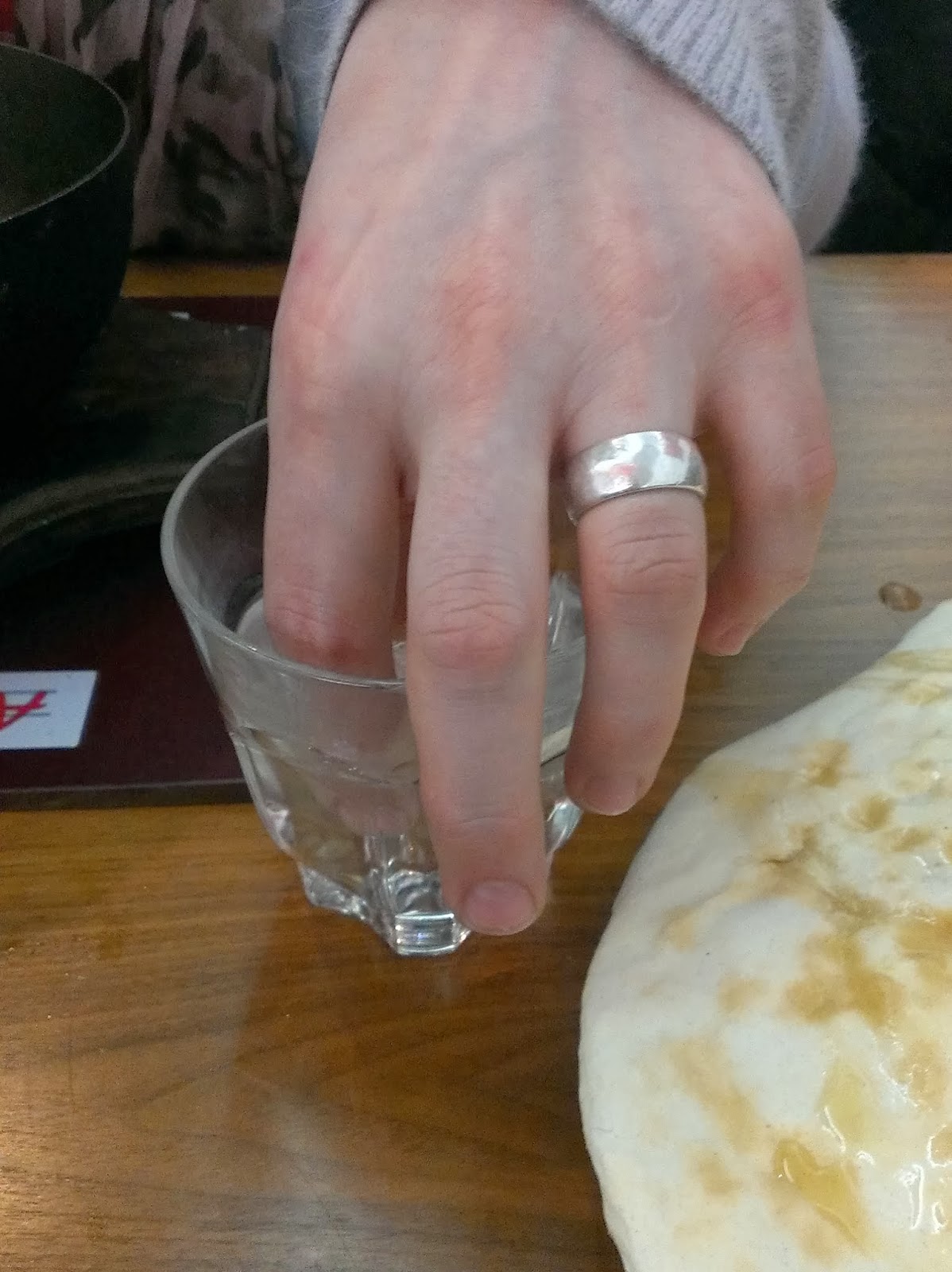 Of course the real danger of a drunken balti comes from attempting to grasp the sides of the metal dish straight after the curry arrives from the kitchen. Something that the Ewing found out, to her cost, rather too late. 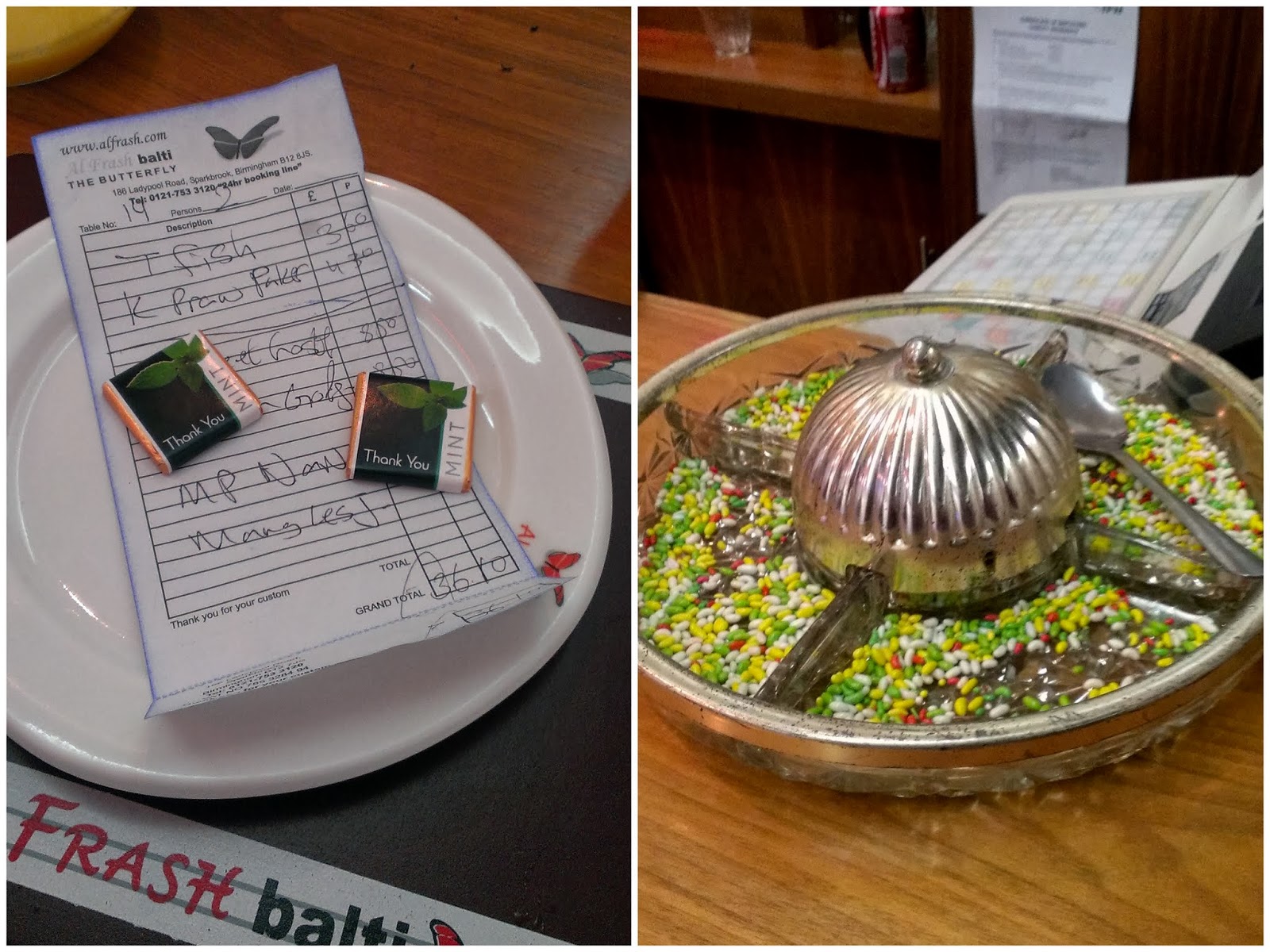 The bill, served with the obligatory chocolate mints, clocked in at around £20 each with tip. Far from extortionate, but not quite bargain basement either.

While I'd struggle to recommend Al Frash solely on the food, the staff were friendly and there was a lively buzz that would encourage a repeat visit. Although, with such a variety of choice on the three main roads of the Balti Triangle alone, you won't be struggling for an alternative choice. 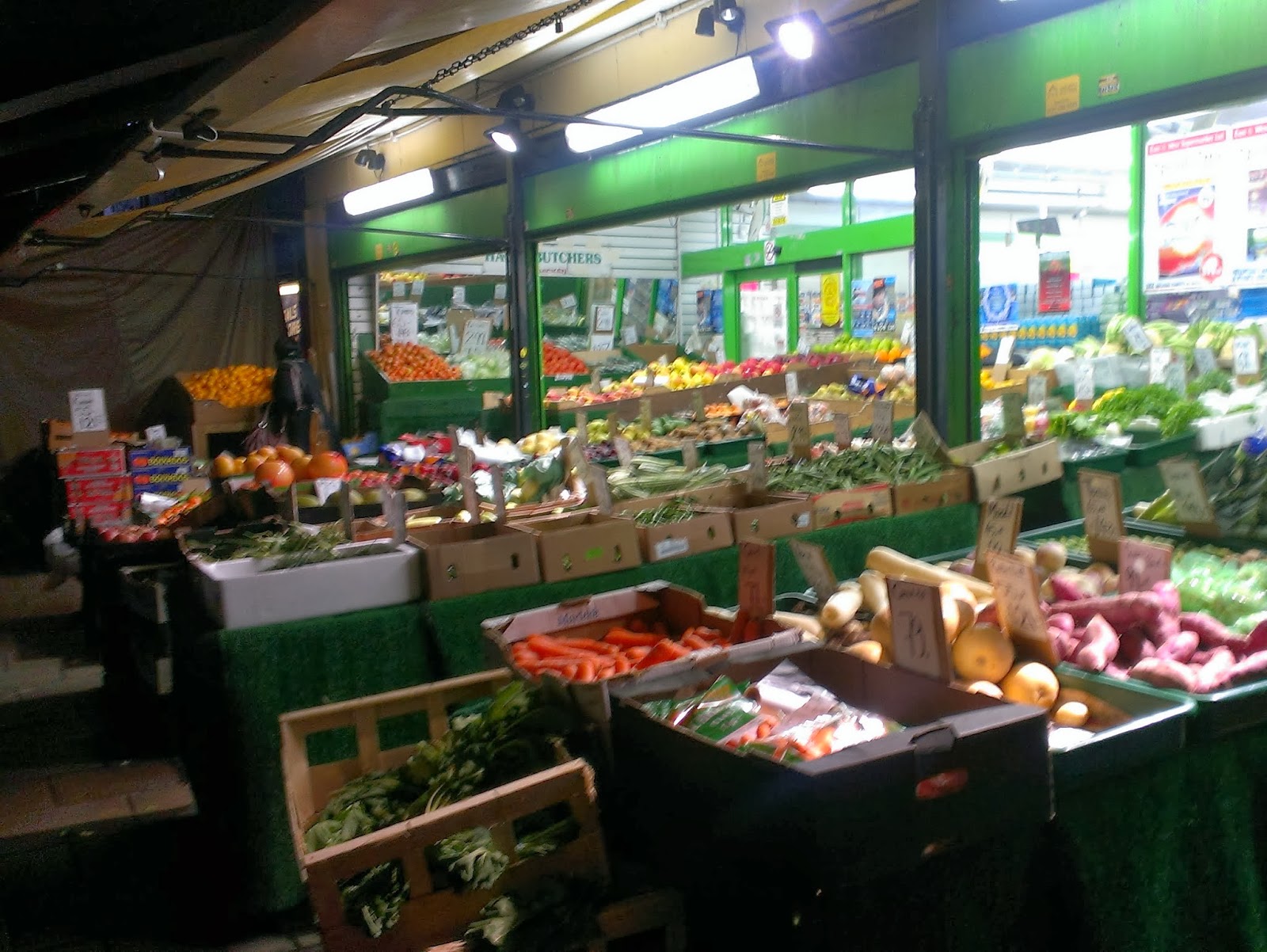 While we were too full for pudding at Al Frash we decided to take a walk up the Ladypool Road to find some treat for later, attracted by the glittering lights and piles of fresh fruit and veg outside the East West supermarket. 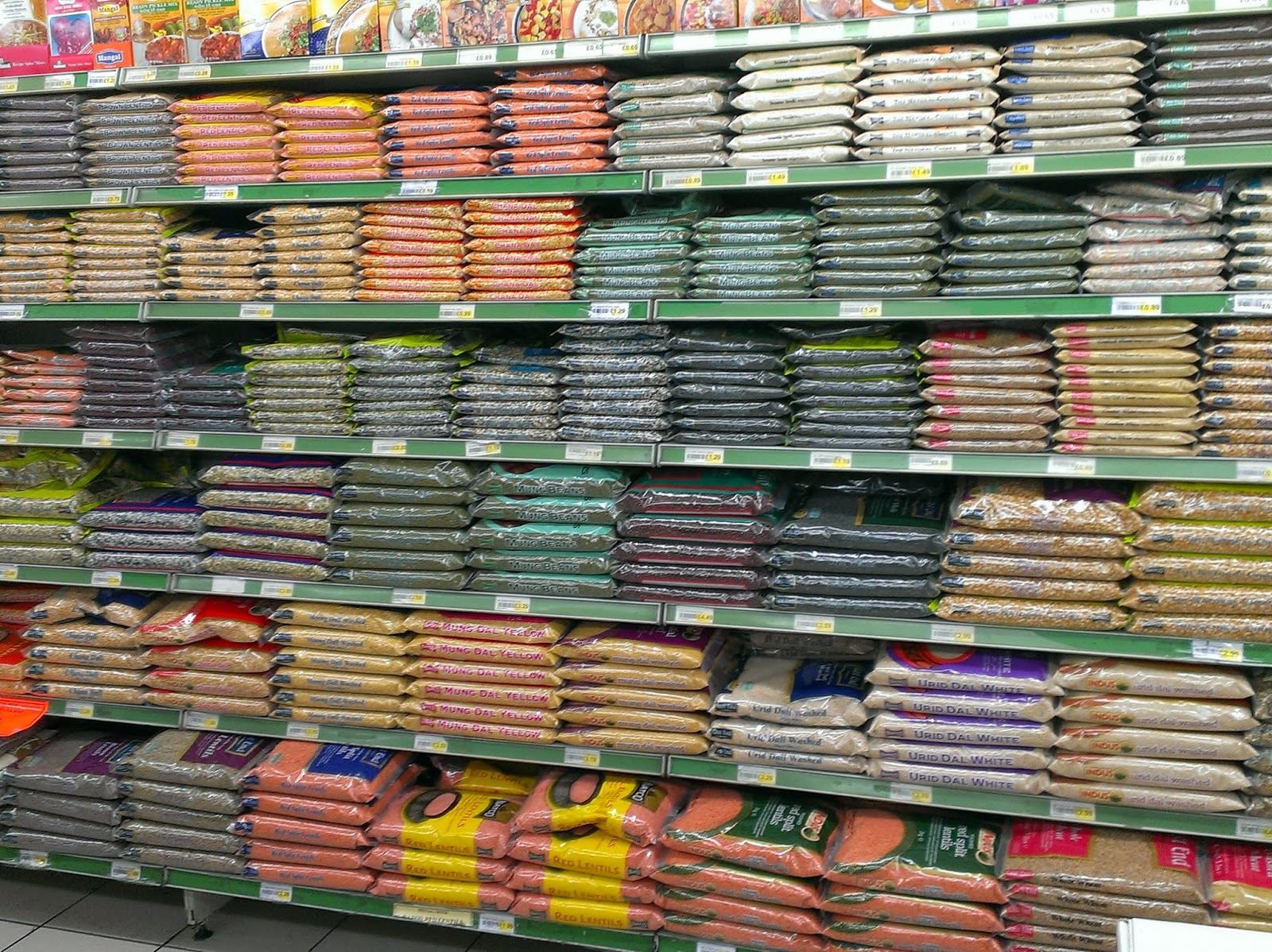 There a very few things I love more than a good old browse around the supermarket, the more unusual and exotic the better, and East West didn't disappoint.

The rows of pulses and spices were particularly beautiful, stacked up in  colourful piles stretching across the shelves and resembling a fibre-filled version of Atari Breakout. 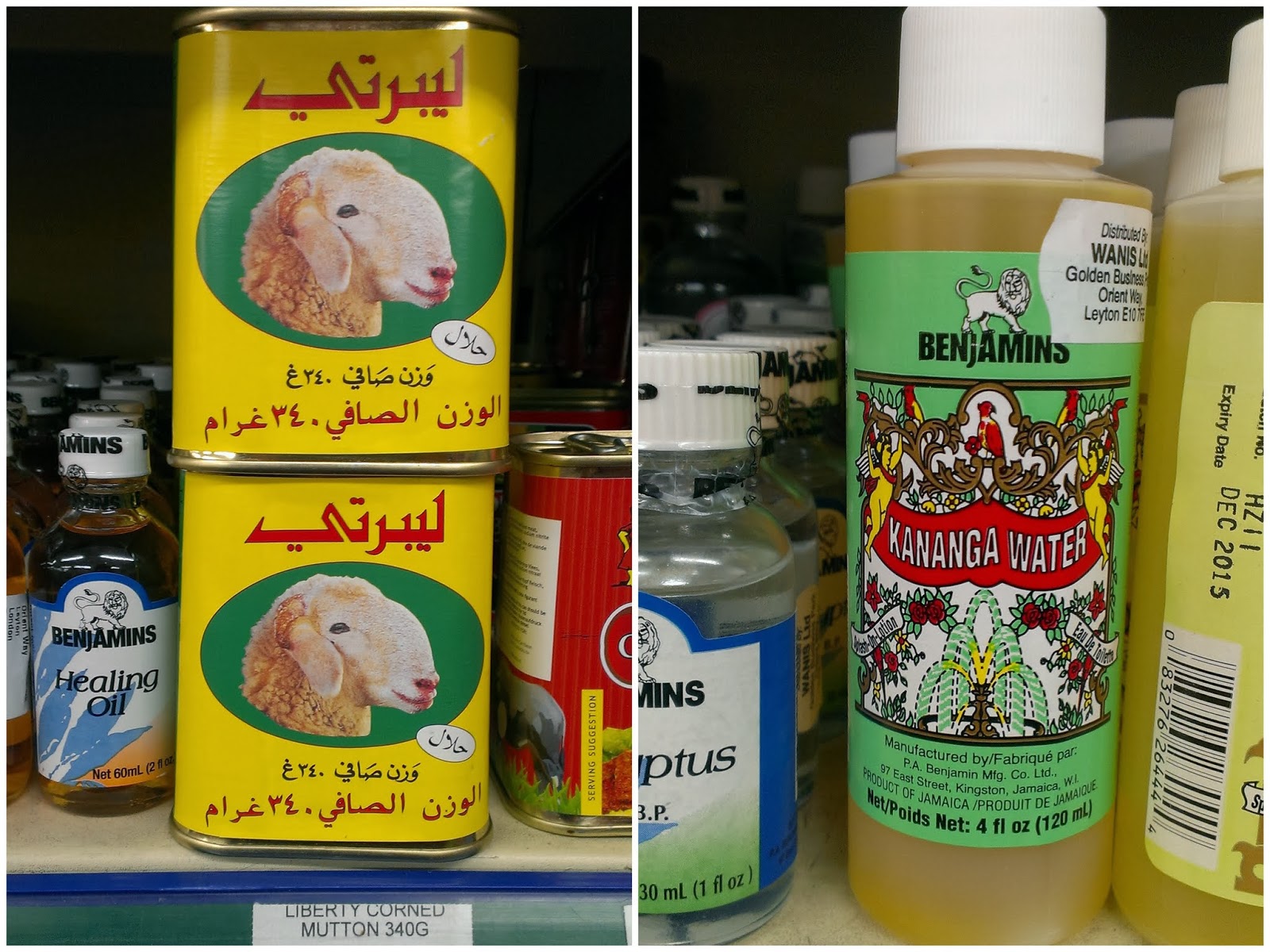 And where else can you find  Benjamin's healing oil sharing space with tins of corned mutton and bottles of Kanaga Water (sadly not related to the Bond villain with a hook for a hand, but a cologne used in rituals including spiritual cleaning, and appeasing the spirits of the dead).

As tempted as were were, an afternoon beer and curry was beginning to take its toll and we made do with glass bottles of syrup-y red Fanta, covered in beautiful, swirling Arabic script, and a box of pistachio baklava. The perfect sugar boost for the morning after.

Follow my blog with Bloglovin
Posted by Amy at 22:31