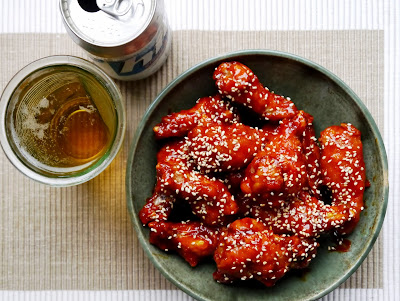 Korean fried chicken - differing from its more famous American counterpart by being twice fried, forming a paper-thin coating which should shatter as you bite into it  - is something I've enjoyed before (rather incongruously while visiting Berlin's Kreuzberg district), but it took a recent trip to K-Town (or, more prosaically, New Malden) to finally spur me into dusting off the deep fat fryer to attempt making some of my own. 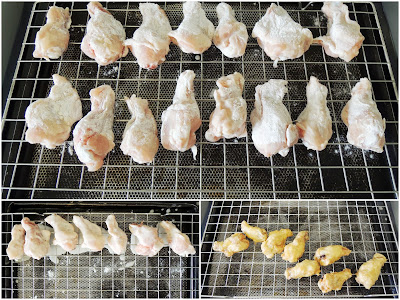 While I doubt there are many wings I wouldn't get along with, there is something terribly disappointing about giant, flabby pieces of poultry. To counteract this, I jointed my chicken into 'wingettes' and 'drummettes' (off-loading the remaining wing tips in to the cat's bowl); this helps to increase surface area and produces more delicious crunchy bits. Smaller pieces also mean the wings should cook quicker, keeping the inside juicy and succulent. In Korea, chickens tend to be much smaller, and the whole bird, cut into joints, is often used. 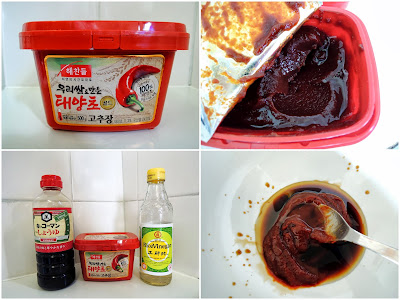 While Serious Eats have a seriously through piece on KFC here, I wanted something I could easily knock up, while keeping the vodka in my cupboard for my tonic and not my batter mix. In the end I decided adapt the basic premise by covering the wings in a coating of flour (I used potato flour) before dipping in a thin slurry of flour and water and frying off in two parts. Firstly at 180c, to cook the chicken through, then upping the temperature to 200c to finish browning the outside. Finally, I made a spicy glaze from Korean Gochujang pepper paste, Japanese soy sauce, sesame oil, honey and rice vinegar to douse the cooked chicken pieces with.

To finish I gave the chicken a quick toss in the piquant sauce before serving with a sprinkling of toasted sesame seeds and a glass of cold Hite alongside. Not only were these crisp nuggets of deliciousness a cinch to make, they were right up with the very best wings I have eaten. 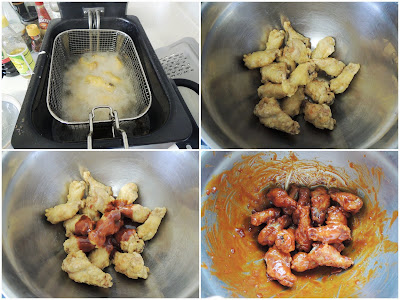 Pat the chicken pieces dry with paper towels and toss in a large bowl with 1/4 cup of the potato flour until well coated. Spread on a wire cooling rack placed on top of a baking sheet. Set aside at room temperature while you make the sauce and batter.
Mix together the pepper paste, honey, soy, rice vinegar and sesame oil in a bowl and set aside.
Mix the rest of the potato flour with enough water to make a thin batter.
Heat the oil in a deep fryer/wok/saucepan until it reaches 180c
Dip half the chicken in to the batter, allowing the excess to drip off, and fry for 5-6 minutes until light brown. Remove to the wire rack and repeat with the second lot of chicken.
Heat the oil up to 200c, place all the chicken back into the fryer and cook for a further 5-6 minutes, or until the chicken is a deep golden brown.
Drain the chicken thoroughly and tip into a large bowl, add the sauce and toss well to coat.
Finish the wings with a sprinkling of sesame seeds or some finely chopped spring onion.
Serve while still hot with cold beer, pickles and plenty of napkins. 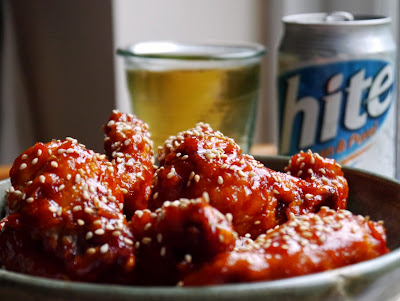