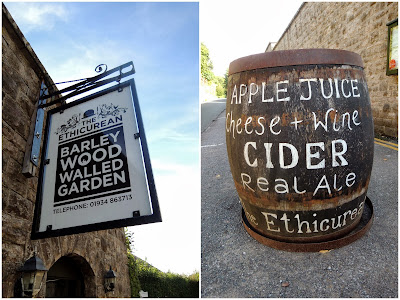 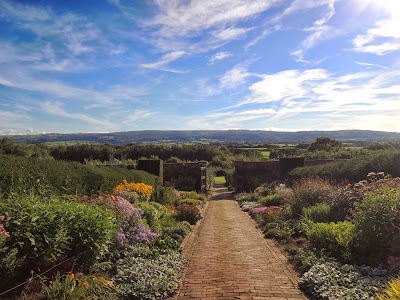 For once I don’t think there are many overblown superlatives that could accurately describe the view of the orchards, flowerbeds and the Mendip Hills beyond, that greeted us on our arrival at the Barley Wood Walled Gardens. In fact, this was about the only sight I could imagine soothing us after a twenty minute journey spiralled into an hour and a half, as we got stuck in a diversion, followed by temporary traffic lights because of gas works, followed by being sent to the wrong Long Lane (yes, there are two, thanks again, Google maps). 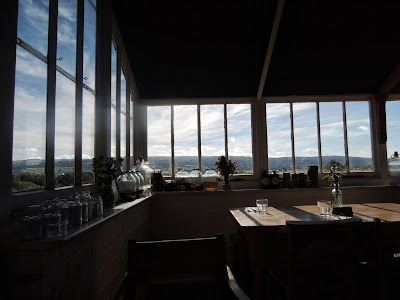 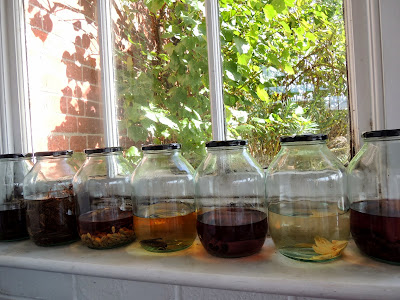 Thankfully, we used the half a bar of reception on my mobile to call the restaurant and they kept our table in the conservatory reserved for us - a bright and simple room with stunning vistas and bottles of various herbal infusions lining the windowsills - although there are further tables at the front of the building, plus outdoor seating for both the full menu or a selection of tea and cakes. 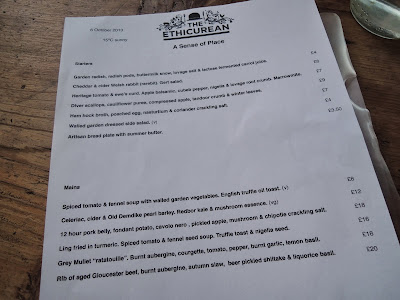 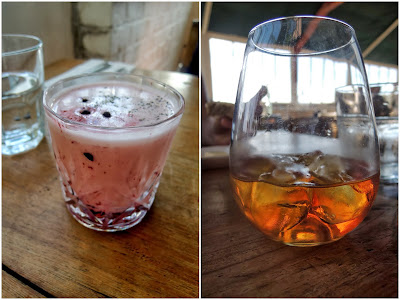 Known for their innovative cocktail list it would have been rude not to sample at least one of their creations and the Ewing duly obliged by ordering a Summer Elder, a fun and frothy drink involving Chase gin, raspberry sorbet, Indonesian long pepper and elderflower cordial. I stuck with something a little more simple and sampled their house vermouth on the rocks, infused with botanicals from their own gardens, proving the perfect aperitif that balanced spice with appetite-whetting refreshment. 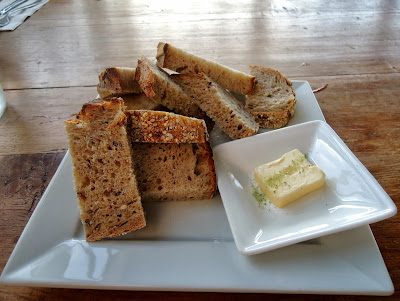 A huge plate of fresh bread and summer butter kept the wolves at bay while waiting for our mains, although I slightly rued my decision not to wear an elasticated waistband, to allow me to try a starter of radish with buttermilk 'snow', lovage salt and lactose fermented carrot juice. 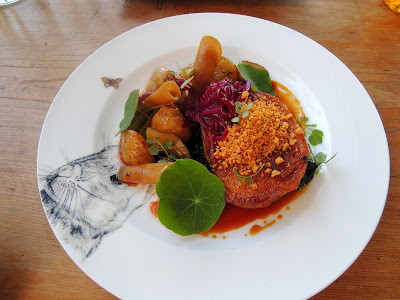 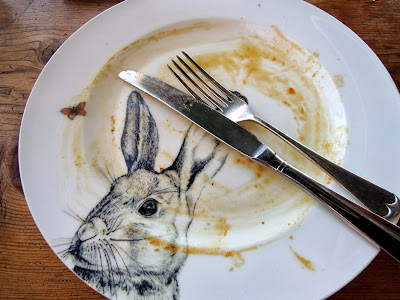 As it was Sunday I felt obliged to try their spin on the classic ‘roast’; pork belly with chipotle crackling, confit potatoes, pickled apples and mushrooms. The plate – complete with rabbit and butterfly motif – was a cacophony of colours with the richness of the rolled belly cut through by the bite of the pickled fruit and the crunch of the spiced pig skin ‘dust’. Of course, the key to any good roast is the gravy, and this slick and shiny nectar passed with aplomb. 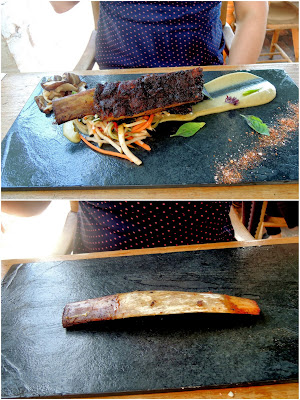 The Ewing was, if it were possible, even more enthused by her main, a roasted beef rib served with slaw, burnt aubergine and beer pickled shitake mushrooms, with only the stripped bare beef bone left as a lonely reminder on a slate that had been scraped scrupulously clean, again, the pickles cleverly working some astringent magic against the sticky shreds of meat. (Check the 'before and after' stomach in the background - TE). 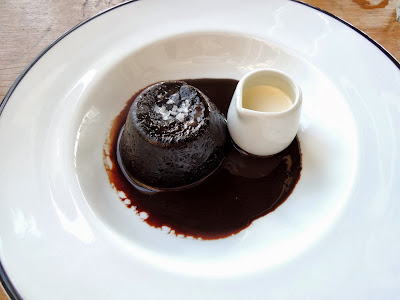 After showing such parsimonious abstinence in skipping starters, puddings were a given and we didn’t hold back, choosing the two richest on the list that featured such rib-stickers as toffee apple cake and almond tart.

My milk stout and chocolate pudding - afloat on a moat of bitter, treacle-tinged sauce - was what post-prandial walks were created for. A steamed sponge of such dark and sultry depths that it welcomed the slick of yellow cream and sprinkling of flaked sea salt served alongside. 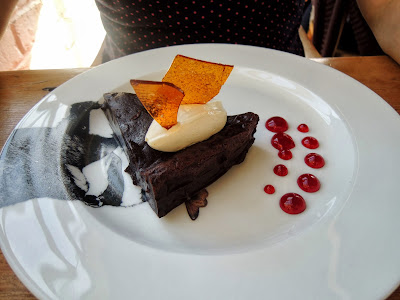 The Ewing’s slice of damp, dense chocolate brownie was no less glorious, lifted by the tart edge of jostaberries that decorated the plate. A serious chocolate pudding that almost defeated the most serious of chocoholics. 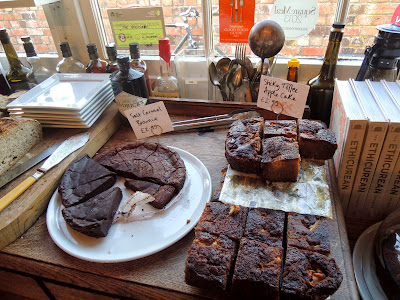 As well as serving as a restaurant and tea rooms, the Ethicurean also sells a select choice of local products, including their own cook book, English truffle oil and slices of cake. Most exciting for me was the range of local beers and ciders, including Wild Beer Company and Bristol Brewing Co. We picked up a range of bottles for takeaway, including the wax sealed Ninkasi, brewed with champagne yeast at a punchy 9%, and Southville Hop, a heavily hopped American style IPA with plenty of juicy, gum zapping, tropical fruit. 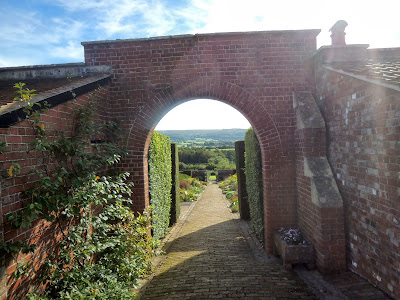 After being coerced to buy some handmade soap at one of the artists workshops on the site - the oatmeal is rather nice - we made our way through the walled vegetable garden, marvelling at the yellow raspberries, grape vines, pears and purple beans along the way, down into the apple orchards at the bottom of the site. 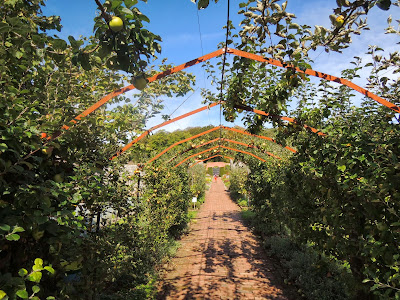 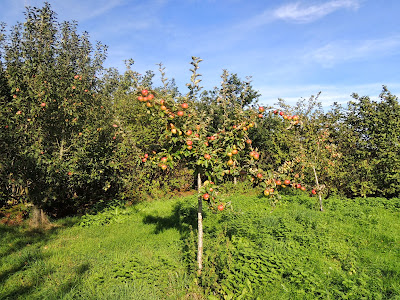 Tim Hayward had visited for the FT just a few days earlier, to see how cider is made in their cider house; and while the press wasn't in action when we were there, the perfect weather meant it was the ideal time to take a walk through the trees, marvelling at the glorious sweet fruit that seem to stud every branch.

I could finish with yet more superlatives about the food and the views, but I rather think they speak for themselves. Instead I'll say just one thing; visit as soon as you can (and bring me back a slice of brownie and a bottle of Wild Beer Wildebeest stout). 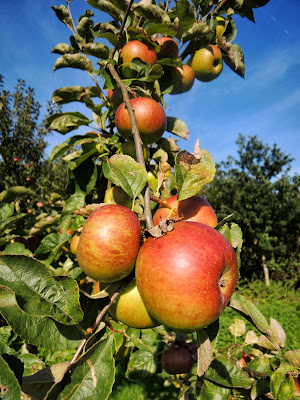