Royal China, Harrow, and a Trip to the Supermarket 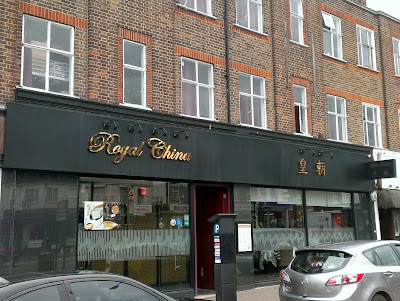 Half way through our bun and dumpling feast at Royal China, the Ewing sagely declared that, if she was down to her last tenner, she’d find the nearest Chinese and blow it all on dim sum and green tea. And for once, who was I to argue?

Of all the things I enjoy eating, and there are many, few give me as much pleasure as going for dim sum. In a world where we have apparently re-wired the synapses in our brains with a constant stream of social media, and are no longer able to concentrate for long periods, it’s the perfect food. An array of steamed, fried, boiled and baked morsels, both sweet and savoury, that keep appearing from the kitchen until you surrender your chopsticks in defeat.

After what felt like weeks of Portuguese food and summer salads the craving for something spicy and sweet took hold and I persuaded the Ewing to drive over to Harrow for afternoon dumplings at Royal China. While most will be familiar with their Baker Street branch, they also have homes in Canary Wharf, Fulham, Harrow and Queensway; and while it would may have been quicker to jump on the train to Marylebone, instead of navigating the charms of the Hanger Lane Gyratory on a Saturday afternoon, driving meant we could visit one of the many Chinese supermarkets in the area on the way home. 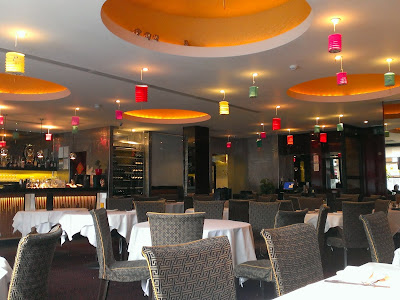 In contrast to the rather drab Station Road it sits on the interior is pretty glam and glitzy, with a special shout out to the black and gold glam of the ladies loos, always important when you've drunk a few pots of green tea.

When your greedy, like me, over ordering is a common hazard - this time, however, we stuck firmly to three choices each, plus a seventh plate for good luck. The dim sum menu, offered until 5 o’clock each evening, it a pretty traditional affair, categorised in to different sections, boiled baked, fried etc, and with lots of helpful pictures for the uninitiated or indecisive. 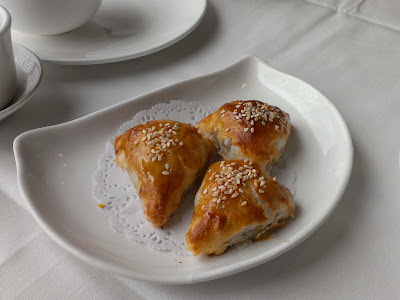 First out were some ferociously hot and crisp pork puffs. Triangles of flaky, short pastry - augmented with plenty of lard, no doubt – stuffed with sweet and spicy strands of barbecued meat. While the best I’ve ever tried, at Tim Ho Wan in Hong Kong, remain unlikely to be beaten any time soon, these were pretty fine specimens. 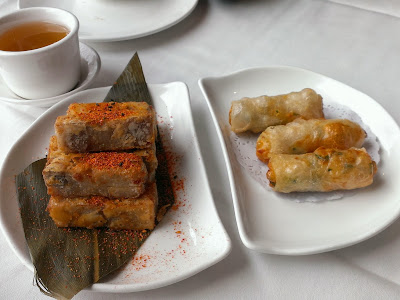 Next up were fried Vietnamese spring rolls, with their crispy rice paper wrapping and crunchy vegetable and prawn centres, and, from the specials, a rather curious, and tasty, dish of sea spiced taro. Here the batons of purple-tinged tuber had been pan fried, to produce a good crunch on the outside while retaining a fluffy centre, before being doused in a spicy salt. 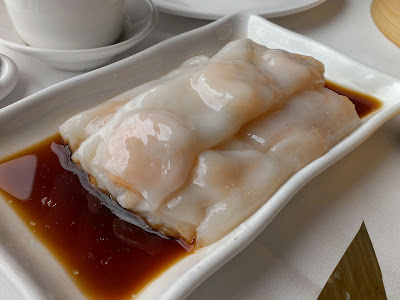 Cheung fun, or steamed rice noodle roll, can be a bit of a divisive dish, with its slithery, chewy dough initially being somewhat of an acquired texture. The first time I tried the dish, many moons ago while out trying to impress a date in a bad restaurant in Chinatown, I underestimated just quite how glutinous they would be, and spent a few uncomfortable minutes masticating desperately while still trying to appear alluring (it obviously didn’t work, as we broke up soon afterwards). Thankfully I persevered, and they are now one of my favourite dim sum. With this example, with its giant, steamed prawn filling and moat of soy dipping sauce, proving exemplary. 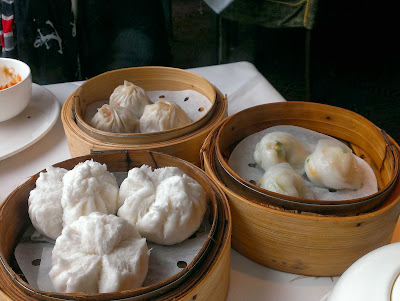 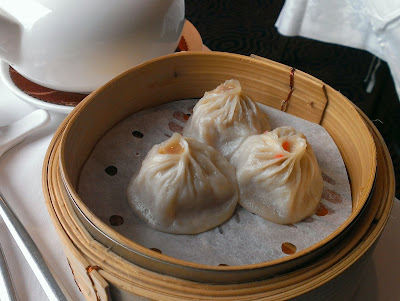 Finally was a tower of steamer baskets stuffed full of jewel-like morsels. My favourite of these were the steamed scallop dumplings with their paper thin wrappers encasing chunks of sweet bivalve, and the xiao long bao, or Shanghai soup dumplings - innocuous looking bundles filled with minced pork and cubes of a jellied stock which liquefies into a boiling broth as the dumpling are steamed. The best way to eat them is to tease them onto a spoon before dousing in black vinegar piercing the wrapper with a chopstick, and slurping the hot contents. Not very dignified, but very tasty.

To finish were the Ewing’s favourite, steamed buns. While she normally favours the classic char sui filling, I persuaded her to branch out and try the chicken and mushroom, with the promise that we could buy some of the chilled pork buns, to cook at home, from the supermarket later. While not as good as the porcine rendition, there is still something intensely pleasing about biting through the puffy, chewy dough to the meaty filling within. 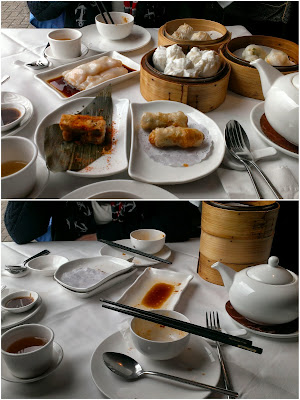 We were too stuffed to manage any of the sweet stuff, although they offer the obligatory custard tarts alongside steamed custard buns, deep fried sesame balls and mango pudding. If you want to go really retro the table next to us were devouring plates of sesame coated battered toffee apples and banana.

The plates may cost a touch more than the other dim sum restaurants in Harrow (to be investigated at a later date), but, that said, at just a few quid for a plate of freshly cooked dumplings, pastries or buns, it still feels like a steal, and the quality and attention to detail is high. Pots of Chinese tea are the classic accompaniment to (keeping the cost even lower), although a full drinks list is available and, judging by the conversation of raucous couple on a first date sitting next to us, the wine certainly does the trick. 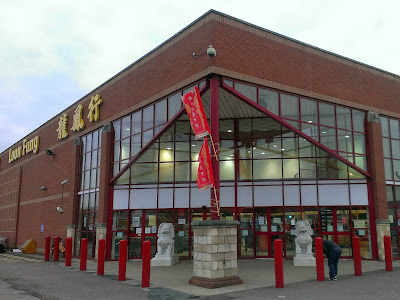 Sated with tasty morsels, we drove over to Alperton to visit Loong Fung, a giant Chinese supermarket on Glacier Way. This place is vast – consisting of a cavernous wholesale shop, selling everything from pomeloes to hot roast pork - with dedicated sections for the tradition the foods of the Philippines, Thailand, Vietnam, Malaysia, Korea and Japan - as well as a large cookware section, butcher, fishmonger and an adjoining Chinese restaurant. 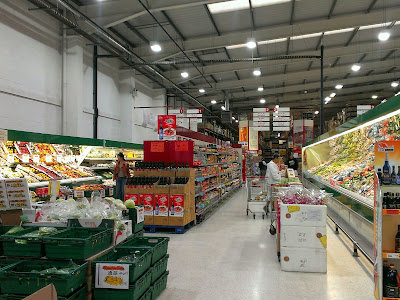 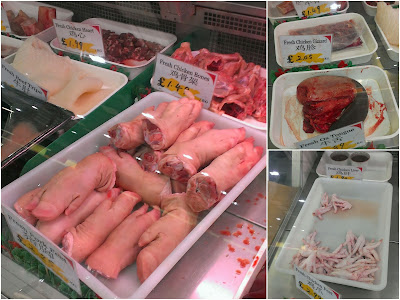 Needless to say, I was in raptures, but managed to restrict myself (mostly) to some essentials; a new stack of bamboo steamer baskets and lid; some paper thin pancake wrappers; a tray of ready to cook char sui buns; and a selection of super fresh Chinese greens. The butchery and fishmongers offer delights such as chicken feet, gizzards and beef tongue - complete with its bobbly black skin - and there is plenty of frozen meat, fish and seafood available too. Including lots of bargains, especially when buying bulk items, hard to find fruit, herbs and vegetables and frozen dim sum. 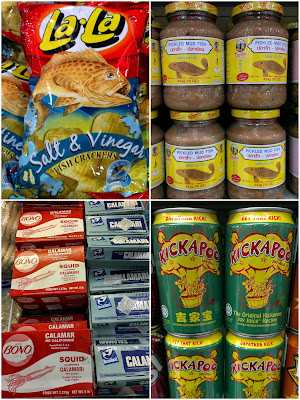 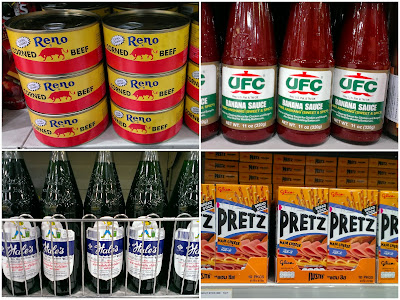 Of course, I couldn’t resist throwing a few of the more random things I spotted into the trolley. Banana ketchup from the Philippines, cheese and ham flavoured pretzel sticks, chocolate ‘Pocky’ biscuits with a banana flavoured coating, and a few cans of ‘Kickapoo Joy Juice’, a citrus beverage that tasted rather like Mountain Dew. There is also a cream cake and baked goods section, featuring, among other things, fresh mochi balls, walnut cookies and pandan cakes, where I picked up both curry chicken and custard (thankfully not together) buns for breakfast the next day. 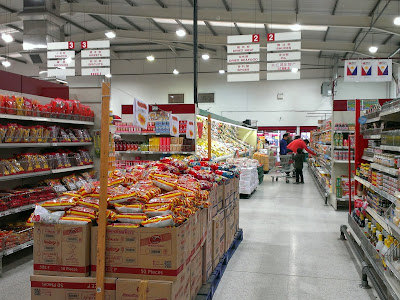 And while the prices for our late lunch may have been a little above the tenner the Ewing talked about blowing earlier, our bun and green tea feast at Royal China only just hit 15 quid a head, with the 13% service charge (formal, but friendly) included, proving that cheap and cheerful can also be classy.