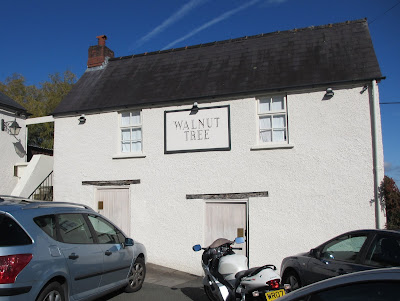 Back in the summer we had my dad staying with us for a while. When I mentioned I was off to the Brecon Beacons in October he, knowing my propensity for eating good food, told me about about a memorable visit to a famous Monmothshire restaurant that he had made over 30 years before.

Of course, that place was the Walnut Tree near Abergavenny, the venue for our final lunch 'over the border'. While fashions and fads may change, I can imagine my father - with the mullet and tash combo he had so carefully cultivated - eating pretty much, give or take, the same kind of food we were presented with all these years later. Simple, local and seasonal, it seems, never go out of style. 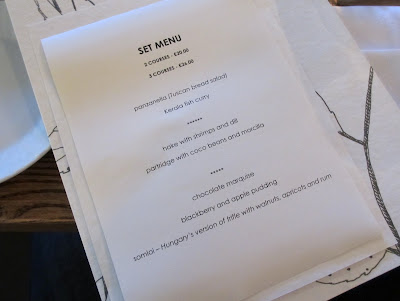 For such a staid and peaceful setting the Walnut Tree has had a lively history; opened by Franco Taruschio in the 60's it soon gained attention for its Italian/Welsh fusion food and remained a popular spot for many years. In the early part of the century it was taken over and awarded a Michelin Star, before rocky times saw it losing said star and turning up on Ramsay's Kitchen Nightmares, finally closing in 2007. Luckily the story has a happy ending, as the restaurant was revived, along with its Michelin Star, a year later by chef Shaun Hill who now capably owns and runs the place.

None of this tumultuous excitement presents itself  in the exterior; the Walnut Tree is a simple white-washed building, with a sunny cottage garden and terrace that you walk through from the car park at the side of the building. A though not on the scale of Le Manoir earlier in the year, it is a sweet little space with magnificent views. 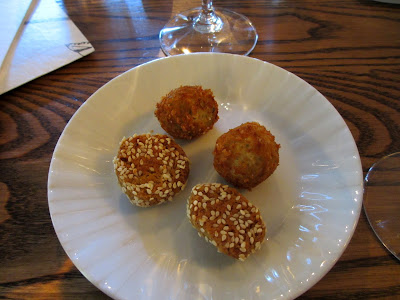 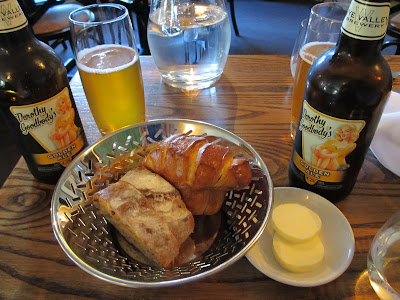 As we arrived the place was buzzing, the small bar area was filled with a party of twelve there to celebrate a 50th wedding anniversary and who ended up being seated opposite us in the dining room, bringing a bit of colour and life to proceedings. The dining room itself takes its lead from the exterior of the building; solid and efficient with bare wooden tables and white walls hung with an array of animal paintings that kept us amused while waiting for our meals to arrive.


We also had a selection of snacks keep the wolves at bay; a friable light blue cheese and sesame biscuit, a spicy Thai fish ball and some freshly baked breads from the kitchen including a feather light white roll and a multi-seeded loaf, that could be described as pretty virtuous had I not trowelled on the butter to each warm slice.

It's a difficult menu to chose from, as it all looks so damn good.  Everything seemed to be calling to me; 'lobster with chickpeas and coriander. 'veal sweetbreads with potato and olive cake', wild duck with morels' saddle and haunch of hare with salsify'.  As I was still suffering, after a surfeit of lamb the day before (and possibly from the sausage sandwich I had already consumed for breakfast), I decided to make the choice a little easier for my protein-addled brain and groaning stomach and go with, the rather good value, set menu; featuring such seasonal delights as Tuscan tomato soup, red-legged partridge and apple and blackberry pudding. 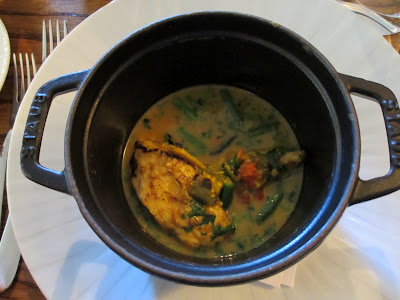 We both started with the Keralan fish curry. This was far finer that my fuzzy picture suggests; rich chunks of perfectly cooked white fish, green beans and tomato in a clean and spicy gravy with heady notes of ginger and citrus. This was a snorter of a dish, my only criticism being the over-sized Staub casserole it came in, rendering its bright colours mute and making it rather tricky to scrape up those precious last drops of wonderful liquor. 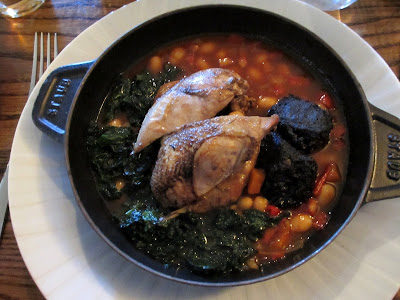 My main was red-legged partridge with cavlo nero, morcilla and coco beans; the shallower Staub this hearty dish came in was much better suited for the job. This was the perfect plate of food to enjoy as the weather starts to close in; hearty and warming, but not too rich and heavy.

The whole bird had been jointed ( I found the breast a touch dry, but the legs were lovely) and laid out on a smoky broth of beans, tomato and paprika, accompanied by some nicely bitter cabbage and wonderful chunks of inky-black morcilla. A simple and delicious combination. 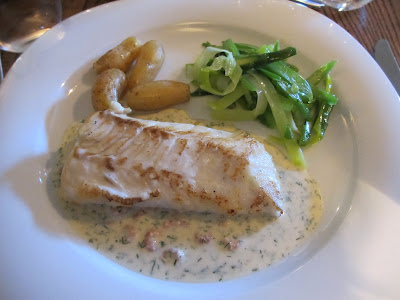 I have to confess, as lovely as mine was, I did have a little food envy at the Ewing's gorgeous looking (and tasting) hake with a shrimp and dill sauce, served with new potatoes and runner beans. Again, a perfectly seasonal dish for a crisp and sunny early October lunchtime. The huge tranch of milky white fish was cooked expertly, the sauce was deliciously creamy; the salty-sweetness of the shrimps and the herbal dill cutting through the richness.

It was the kind of dish that made me want to call into the fishmongers on the way home and cook it all over again for dinner. The highest praise. 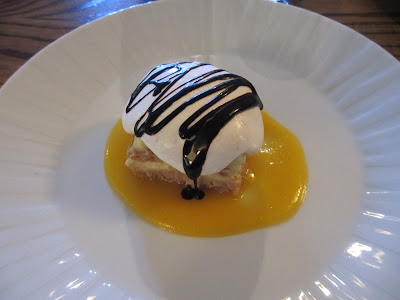 The desert comprised of a thick dollop of lemon zest-flecked cream, covering layers of walnut-flecked booze-soaked sponge and custard, in a pool of apricot sauce that tasted like the last throes of summer. Very rich and very nice .Although it wouldn't be the flavours I would chose for a pud, it certainly packed a punch, and not just from all the rum. 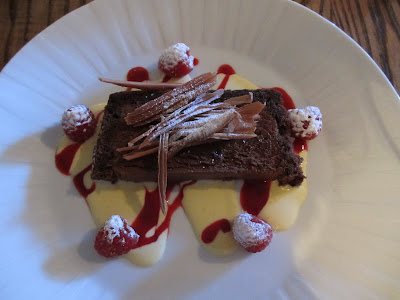 The Ewing was in heaven with her chocolate marquise; a slice of terrine featuring a light sponge outside with dense ganache middle, doused in chocolate curls, cream and raspberry sauce. I was surprised to even get a look-in with this, an can confirm it was certainly a 'plate-licker' (don't worry, no plates were licked in the making of this blog, but it was a very close thing...). 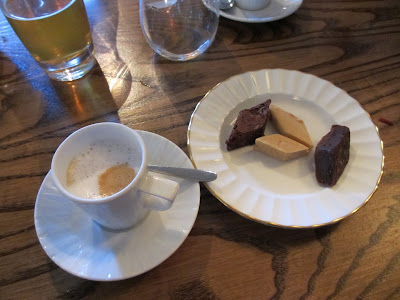 A macchiato and an espresso came with (highly unnecessary at this point) dried fruit-studded brownie pieces and triangles gorgeously smooth and sweet vanilla fudge. 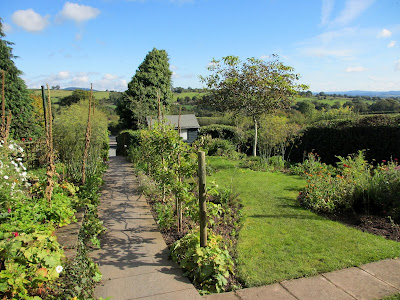 I was a little worried on our arrival that our meal may, in contrast to the day before The Hardwick, be a little more than a pit stop. The couple who were in the car park as we pulled in had already been served their amuse bouche and bread, and were having there orders taken, before we had even been seated. But I needn't have worried. Although the food initially came out the kitchen at rather a pace, it turned out to be the sign off a well-drilled kitchen trying to keep ahead on a packed Saturday lunchtime. By the time we had reached our mains things had settled down, and by pudding we were well ensconsed in the happy atmosphere, watching the afternoon slowly roll by.
Indeed, I could have quite comfortable spent an agreeable hour or two in the garden admiring that magnificent view, if we didn't still have the journey back to Bucks to still contend with. So off we went, through the Heart of England and back home, still carrying a small piece of Wales in our hearts (and a somewhat larger piece around our waists...).