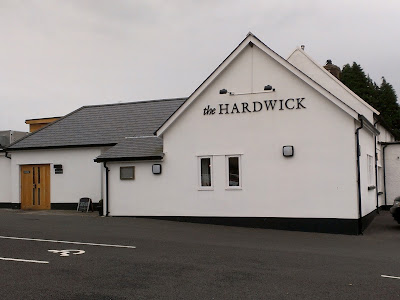 Regular readers of the blog (if, indeed there is such a thing) will know by now that birthday and lunch are two of my favourite words to see in tandem. Although getting a year older soon loses its appeal, getting together to eat, drink and spend time with friends and family is worth the crows feet and expanding paunch.
I was very much looking forward to our visit to the Hardwick, a pub and restaurant with rooms set in the rolling hills on the outskirts of Abergavenny, which has been owned and run by chef Stephen Terry since he left the Walnut Tree, situated just down the road. From checking out the website and reading a few reviews of the place I was instantly sold; a traditional pub with a hearty menu of 'proper' food served in big portions is certainly the way to this birthday girl's heart.
We were out and about early on the day of our visit, whisky tasting at the Penderyn Distillery in the Brecon Beacons, and so I was already feeling pretty jolly by the time we arrived for our late lunch. A feeling that didn't dissipate when were greeted warmly and lead through to the dining room; a dark-beamed and cosy space, the smell of woodsmoke lingering in the air providing a cosy respite from the drizzle and damp outside. 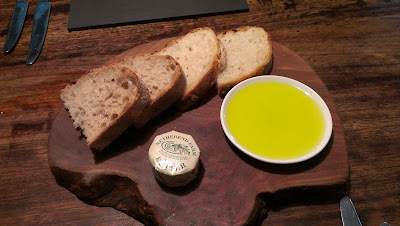 We started with a pint, Rhymney for the Ewing and Wye Valley for me, and a wooden board laden with Hay on Wye baker Alex Gooch's sourdough bread, served with Nethrend Farm butter and Planeta Sicilian Extra Virgin Olive Oil.

The bread was fantastic (I had already eaten one of his sticky fruit buns, bought from Hay on Wye market the day before, for breakfast), although at first I though oil and butter was a bit belt and braces, but after trying them both I'm very glad we had the option; creamy, salty local butter and a gloriously peppery, fruity oil which they also sell at the bar to take home. 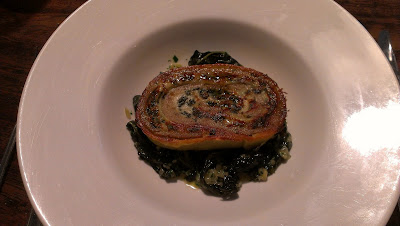 My rolled rabbit lasagne on a bed of cavlo nero and lemon. This was a cracker of a dish. The rabbit had been turned into a forcemeat, which was layered up with bechamel and more greens before being rolled in a large sheet of pasta, cut into slices and pan fried for a crispy finish.

The rabbit 'sauage' was gloriously juicy, the pasta light and the garlicky, iron-rich greens gave the dish an autumnal note. If there were a criticism it was very well seasoned, bordering on over-salty, but plenty of Wye Valley Bitter to wash it all down helped. 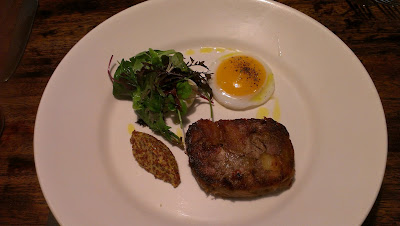 The Ewing's confit duck leg and duck liver hash with duck egg; a fabulously rich cake of shredded meat and offal with a gloriously gooey yolk that created its own little pool of sauce for the meat, the richness cut through with wholegain mustard and a green salad. 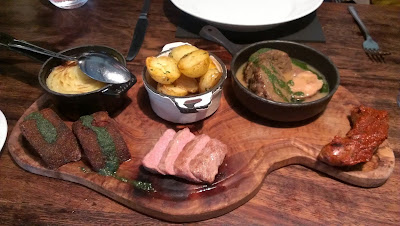 BahBah Black Sheep - A Taste of Local Organic Pen Y Wyrlod Lamb, Roast Loin, Merguez Style Sausage, Faggot & Braised Neck, Shepherd’s Pie and Crispy Breadcrumbed Leg with Sauté Potatoes and Seasonal Greens. As it was my birthday (I may have mentioned this already) the Ewing very agreeable allowed my to select this sharing feast for two as our joint main (they also offer a taste of local beef, which sounds equally excellent offering dieters delights such as suet pudding and triple-cooked chips). Luckily it was worth her compromise.

I swoon every time I look at this photo (it's probably still the meat sweats). After diligently eating breakfast lunch and dinner (and sometimes brunch, tea and supper too) every day since my last birthday, I can confidently say that this was up there in the top five dishes of the year. It epitomises everything that, to me, great meals are about; generosity; big flavours; seasonality; sharing and simplicity.

I was in raptures over every morsel, but standouts were the faggots and neck, braised in a wonderfully rich gravy; crispy breadcrumbed shredded leg, mixed with more greens then deep fried and served with a punchy mint sauce; and a cottage pie of such unctuous magnificence I'm still dreaming about it now. The Ewing loved the slices of butter-soft and simply seared loin the best, although she found the merguez with harrisa paste a little too spicy, offering the rest across the table to me. Result. 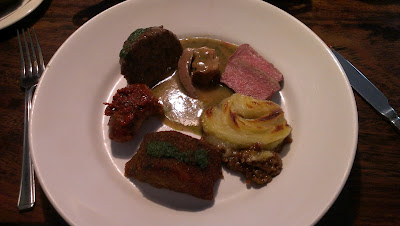 Enjoyed with a glass of rioja for me, and a malbec for the Ewing, the dish was fabulous; even the simply fried potatoes seemed to taste more 'potatoey' than your average spud. And although a full-on meat-feast of gargantuan proportions may not for the lily-livered amongst us, the Ewing and I have famously iron constitutions, and managed to take the whole thing down with only a few lonely potato halves left as evidence. 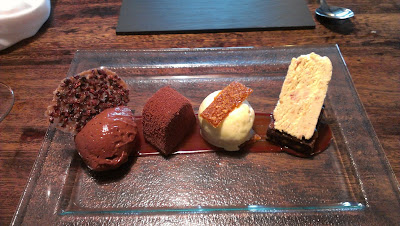 A plate of 'Chocolate Loveliness' for two to share. From right to left peanut butter and jelly parfait on a Valrhona chocolate brownie, white chocolate ice cream with salted peanut brittle, billionaire's shortbread and chocolate mousse with Grue Tuile, all served with a Halen Mon salted caramel sauce. This arrived at the table when the Ewing had nipped out, and I was sorely tempted to get stuck in before she could return; it was only my difficulty in managing to pick up the spoon after such gargantuan quantities of lamb that stopped me attacking it with abandon.

I hardly need say it was all quite delicious. The white chocolate ice cream was like a frozen, crunchy Milkybar on steroids; the billionaire's shortbread being a step up from mere millionaire's, with shortbread totally encasing a gooey caramel filling, the whole thing doused in chocolate to finish; and the mousse like a marshamallowy cloud of pure, sugary-laden joy. A special mention to the wicked pb&J parfait, sitting atop the finest brownie i have had the pleasure to eat for a long while (sorry, darling). 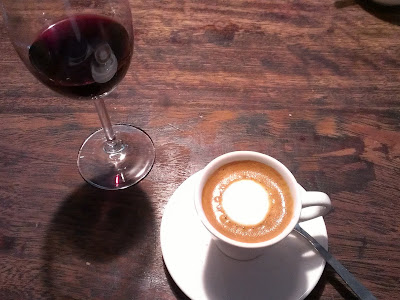 As it was my birthday the Ewing indulged my lunchtime drinking with a glass of Visciola Piergiovanni Giusti, Le Marche, from near where we stayed in Italy this summer. Described on the menu as 'perfect with chocolate lovliness', this slightly chilled, cherry-infused sweet wine was indeed a fine match.

A macchiato rounded off the evening, although we had to pocket the handmade cantucini for later, being fit to bursting by this point (I think they might still be slowly dissolving into crumbs at the bottom of the Ewing's  handbag...).

The Hardwick really is a great place; cosy and welcoming with fabulous food and good value (while the a la carte could get expensive if you were indulging, and we certainly did, it is still very good value, and the set lunch, at £21 for three courses, is exceptionally priced). We even got to see to Mr Terry himself, who was busy behind the pass for lunch service, and came out of the kitchen several time to walk around and talk to the guests. Thanks must go to the lovely Ewing, long suffering wife and chauffeur, who treated me to to this lovely lunch and then drove me home - while I was rather merry, and probably rather annoying -afterwards.
Yet again we managed to eat and drink ouselves into a comfortable fug, where breathing became slightly laboured and buttons strained. And all of which merriment necessitated a short (long) rest on the bed when we got back to the lodge. A year older, but happily no wiser.
﻿
﻿