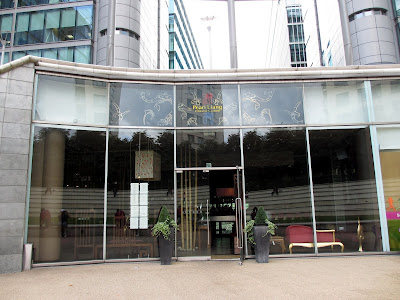 I first read about Pearl Liang many moons ago, in a raving review written by Giles Coren, a dim sum aficionado, who went crazy for the soup dumplings, sesame prawn rolls and lobster noodles, memorably describing the latter as 'perfectly cooked’ with ‘firm, straggly, munchable noodles’. I needed to go.

Despite it being in Sheldon Square, a mere hop step and jump from my Marylebone stomping ground whenever I come up to Town, the idea of the Paddington Basin seemed almost as remote as the Amazon - not helped by the, admittedly very comprehensive, directions page on their web site that tells you to walk 100m along platform eight of Paddington Station, before turning along a walkway, which leads you up a tow path.... All very Harry Potteresque, and rather confusing.

Finally the opportunity for a visit arose. After a thoroughly enjoyable morning watching the Olympic archery at Lord's we decided to head over for lunch, enjoying a leafy stroll through Maida Vale and along the Regent's Canal,  and managing to find it with relatively little difficulty (apart from getting horribly lost under the Westway, where I started to feel a bit like walking Blur lyric). Very soon we were being seated by our charming waiter and looking forward to tucking in to our first basket of buns. 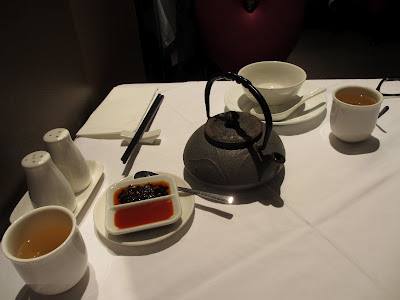 First things first; a nice pot of jasmine tea and some chilli oil and chilli sauce. These, of course, were meant for the dipping in our forthcoming treats, but I sampled them with a teaspoon, sans dumplings, while the Ewing looking on disapprovingly. Our waiter, however, remained completely unphased by my appalling manners; bringing us a knife after seeing us trying to hack our cheung fun in half, keeping our tea topped up, and patiently talking us through all the specials on the menu.

In fact the service was some of the friendliest I have received for a long time; a far cry from some Chinese restaurants that seem to persevere in the mistaken belief that ignoring you, sighing, scowling and slamming down plates is somehow contributing to a positive customer experience. 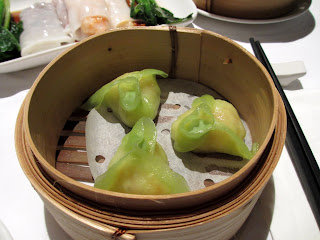 We started with a trio of very fine seafood morsels. First up were some Japanese inspired wasabi prawn dumplings. These beautiful emerald green bundles contained a filling of crunchy prawn, with just enough of the fearsome green horseradish to give it a nice bite. 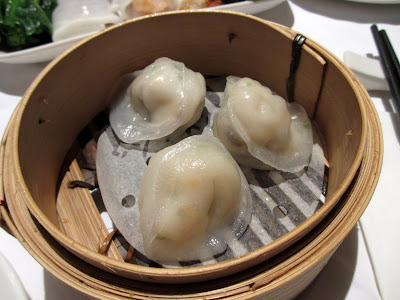 Scallop dumpling were sweet and subtle, crammed full of super fresh bivalve. Perhaps a little understated for my tastes (everything was nicely seasoned, but eating spoonfuls of chillis in oil before lunch can dull the tastebuds a little), but these were one of the Ewing's favourite dishes of the afternoon. 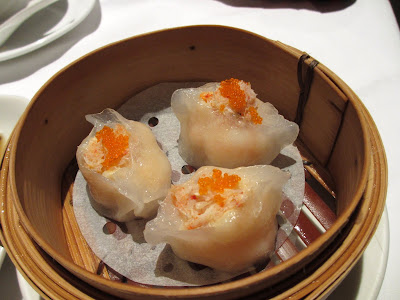 One of my favourite plates was the kings crabmeat with egg white dumpling, each topped with a dollop of neon fish roe. These were glorious mouthfuls, the generous crab filling being gently cradled by the gossamer-thin rice flour wrapper. 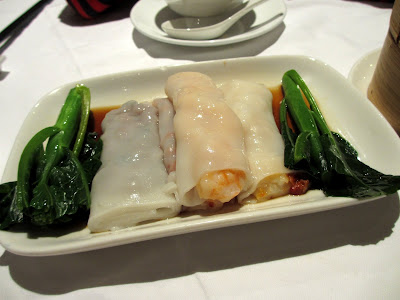 Mixed cheung fun with Chinese broccoli and sweet soy sauce. I had mixed feelings about cheung fun when I was introduced to dim sum, not helped by a particularly thick and slimy example I was served up in Chinatown a while back. For a long time I avoided them, suspicious of the sometimes unpleasantly thick and gluey wrappers and the way that, however delicately I tackled them, half the filling always seemed to fall down the front of my shirt mid-bite.

Here I was tempted to try them again, and it proved to be a wise choice. Although still slippery buggers to eat, the rice dough wrappers were light and tasty and the fillings generous. Memorably good was the prawn version, huge pieces of perfectly cooked seafood nestled in their steamed rice noodle coats. 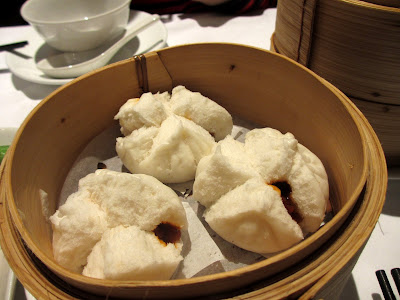 Honey roasted pork bun. The Ewing's love for pork buns knows no boundaries, and it would be impossible to imagine lunch without at least one basket of these. They were good examples, if unspectacular; perfectly light and puffy dough with lots of sweet spicy pork inside. 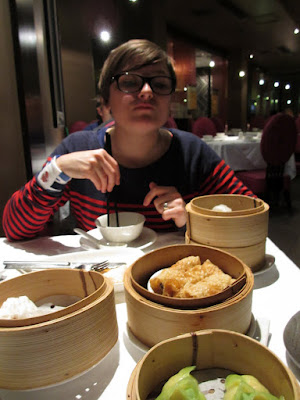 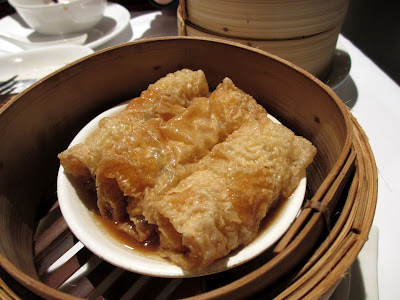 Bean pastry with prawn in abalone sauce. These are thin rolls of bean curd skin (like that which is sometimes wrapped around Chinese meatballs), served piping hot with a sweet sea snail sauce. A new experience for me, I found these light, delicately chewy and quite delicious. 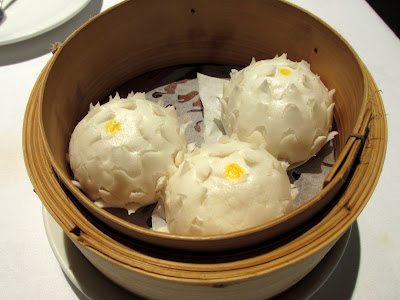 We finished with steamed chrysanthemum buns filled with custard. These were made from a similar, feather-light and springy, dough as the pork buns, shaped to resemble the eponymous flower. Quite beautiful and just sweet and creamy enough after all the salty, spicy flavours that had come before.


The great thing about dim sum is that (in the vast majority of places) you can as much as you please without getting any where near breaking the bank. Yes, even with our vast appetites. Here was no exception, with each plate costing around the three pound mark, exceptional value for some very tasty dumplings and buns. Couple that with the fact that dim sum is one of the few meals that tastes better with a pot of tea (although a cold beer is also welcome), and you've got a delicious bargain on your hands. That is, of course, if you can find it first...