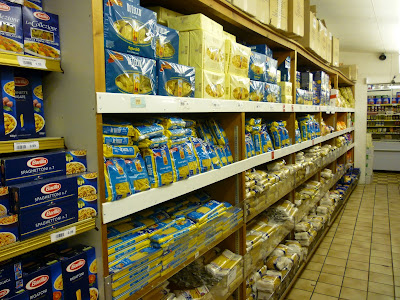 I like pasta; I like it a lot. Barely a week goes by without at least one pasta dish gracing our dinner table. And therein lies the problem; its very ubiquity. Being seen as a cheap choice, or a quick fix, serve to diminish its lustre and turn it into mid week meal fodder for those times when you can barely be bothered to boil the kettle and pop open a jar of pesto.
My recent trip to Italy served as the perfect opportunity to become acquainted with the simple delights of dough again. Wherever you go, from the high up in the Alps to the heel of the boot, you will find it on every dinner table. It may come in different shapes (or the same shapes with different names), dried or fresh, stuffed or with sauce, but it will always be there, made with an understated  love and care that elevates it far above merely flour and water.
Here's some of the highlights we sampled on our travels in Tuscany, Umbria, Le Marche and San Marino. 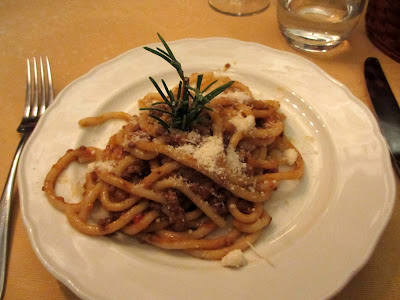 Pici with ragu. This formed the primi piatti of our meal at the wine cellar in Dievole, the day after my sister's wedding. Despite most of us feeling pretty second rate, this plate of pasta summed up everything that's great about simple Italian cuisine. The pici, a sort of thick Tuscan (more particularly from the Siena region) spaghetti, was served perfectly al dente (as were all the pastas in this blog) with a sparing amount of rich and deep meat sauce.
http://www.dievole.it/en/home/home.aspx 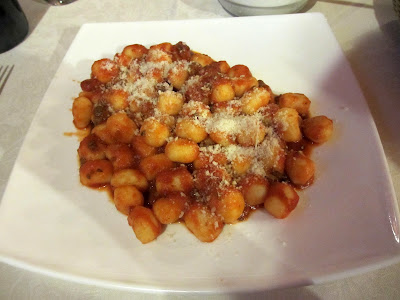 Gnocchi with hare ragu. We ate this in another cellar, this time in the beautiful Umbrian town of Gubbio. The gnocchi were springy and light, but I found the ragu rather too tomatoey, with the acidity overpowering the chunks of lean and tender meat. 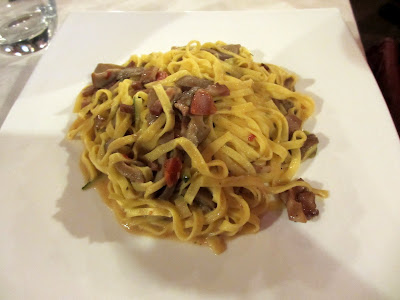 Our friend Marinella's choice; tagliatelle with porcini and bacon. Wonderful deep, meaty flavours that worked perfectly with the local red. Although this was a dish that may have been better suited to a chilly autumnal evening rather than a stifling August night it still went down a treat. 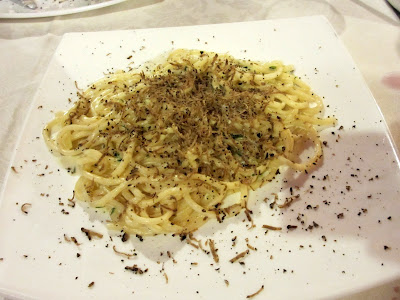 Umbracelli, the local spaghetti-like pasta, with fresh summer truffle. Umbria is known for it's truffles, and it's almost impossible to go anywhere in the region without seeing them on the menu in one guise or another. Even though the black summer truffle is the mildest of all truffles, throughout the evening the heady scent slowly filled the whole dining room with its musky perfume.

This was like the crack cocaine of the spaghetti world. A light cream sauce with tiny pieces of rocket leaf, liberally covered in a thick dusting of fresh fungi. In no time at all I was scraping the tine of my fork across the plate in order to scoop up the last scraps of sauce.
http://www.tavernadellupo.it/it/index.php 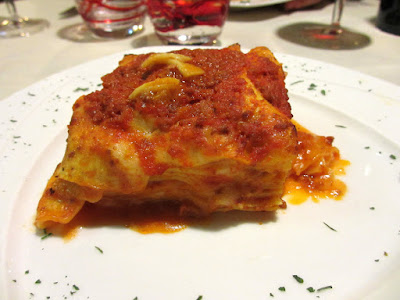 Lasagne. I honestly can't remember ever ordering lasagne in a restaurant, but an unforeseen 'incident' with the hire car meant we had ended up in San Marino for the evening, and the Ewing assured us the Blue Guide had said 'you wouldn't get better lasagna than that served in San Marino'.

The Ewing loved it, and even claimed, rather controversially, it was better than my efforts. Good as it undoubtedly was, it was the inverse of my lasagne, containing multiple layers of pasta, or 'stodge' as the Ewing usually calls it, and only very small amounts of sauce; something that would usually be shunned by her at home. It was very good though, and made a lovely match for the bottle of sangiovese made from grapes grown on the slopes of San Marino itself. 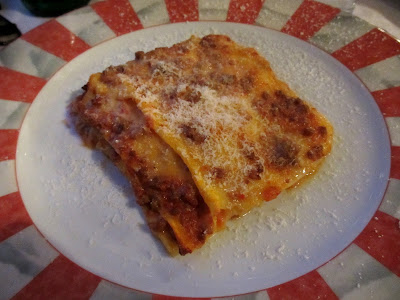 Another night, another baked pasta like dish; this time it was vincigrassi, eaten in a restaurant in Urbino; a dish that is a speciality of the Marche region. This again featured multiple sheets of lasagne and was very tasty, being milder in flavour from the night before, but with a slightly richer sauce. The ragu, according to their website, was a mixture of chicken giblets, pork and veal, topped with bechamel and browned in the oven. 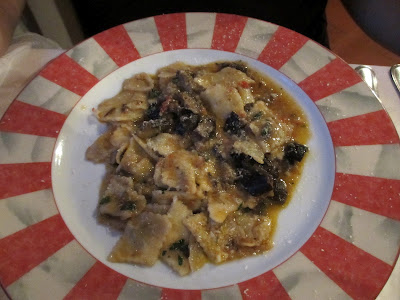 Marinella chose the malginatti, or 'malformed', pasta with a silky a sauce of aubergine and Parmesan; the rough cut mis-shapes being the perfect vehicle for the sweet, thick sauce. 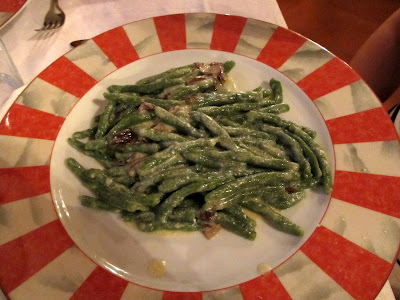 The Ewing chose the wonderfully named strozzapretti, or 'priest strangler' pasta, coloured green with spinach and served with a sauce of bitter red radicchio and local Urbino cheese. The last two dishes being the perfect examples of quick, cheap and delicious plates of food that eschew meat without losing out on flavour. 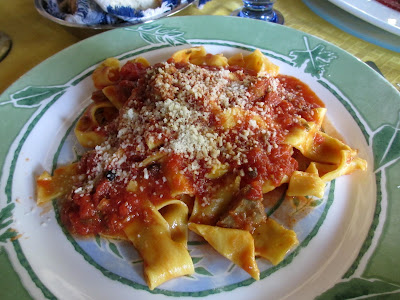 And finally, fresh homemade pappardelle with wild boar, a famed dish from the region. We had enjoyed this at my sister's wedding feast, but too much prosecco during the aperitivo meant I had forgotten to get a picture. It took me until the last day of the trip to have it again, and it was well worth the wait.

The wedding dish was one of the best bowls of pasta I have eaten for a long time. The ragu had a glorious depth and richness, and despite the four courses to follow it was all I could do not to start attacking my neighbour's plates. This version had a sauce, that was lighter and thinner, with a more pronounced tomato flavour, which proved a better choice for a lighter lunchtime repast.
http://www.ristorantemaria.com/
Ten glorious days, a paunch regained, and a love of pasta restored.
Posted by Amy at 11:23