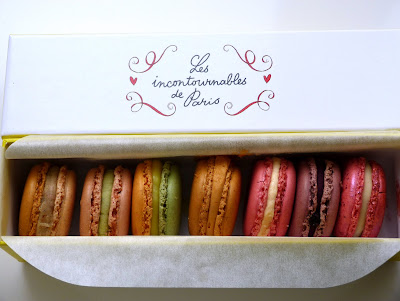 The macaron can be pretty much summed up by the message on the Pierre Hermé box above; Les incontournables de Paris, or for those lacking in the local lingo like me, the attraction of Paris. Unlike our rather weighty, dense coconut macaroons (complete with neon cherry), the similarly monikered French number is a picture of refinement; a light, meringue and ground almond based confectionery, sandwiched together with ganache, jam or buttercream.

Although not quite as ubiquitous as the cupcake (their delicate nature and difficulty in getting just right being a barrier to their total takeover) the last few years have seen a world-wide macaron explosion. Despite their global popularity and now being available almost everywhere the true home of the macaron is Paris, and when in Rome... 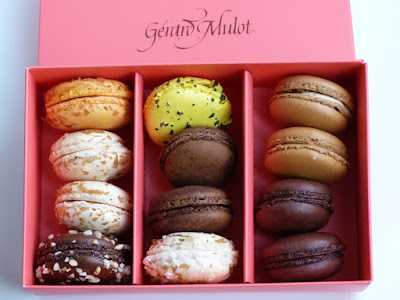 First up was a this bright pink box of Gerard Mulot goodies. Not on my initial hit list, we stumbled upon his shop while taking a walk down by St Sulpice in the 6e. I'm not usually a fan of the fancy and delicate, but there is something quite beguiling about a well made macaron, and the heaping pyramids of brightly coloured treats soon tempted us inside. 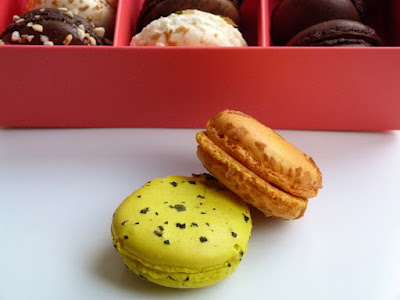 I must confess pretty much total ignorance in macaron related matters, but I enjoyed these neon jewels. Out of the trio we tasted these were the lightest, crispest and most almondy tasting, with the best balance between filling and shell. Despite their rather lurid appearance the flavours, although fresh, were quite subtle. My favourite was the simple chocolate, left for a couple of days after purchasing to get nicely gooey and squidgy in the centre. The orange and cinnamon and passionfruit and basil above were more delicate than their name and lurid colours suggest and went down a treat.

As well macaron there were exquisite displays of pastries, chocolates and pies, as well as a bakery area at the end of the shop selling fresh baguettes, tartine and sandwiches. The slice of tuna, semi dried tomato and dill tart we bought to eat later was utterly magnificent.
﻿﻿ 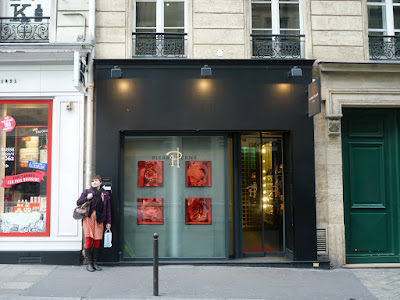 Next stop was Pierre Hermé in Saint-Germain-des-Prés for a Sunday morning snack. If Ladurée are the sage old lady of the macaron world then Pierre Hermé is the enfant terrible, experimenting with wild and challenging flavour combinations and helping reinvent the gerbet for the 21st century.

After starting his career at the tender age of 14 with acclaimed pastry chef Gaston Lenôtre, Hermé went to work at Fauchon, before helping Ladurée with their expansion in the late nineties and then branching out alone a year later. Hermé is now considered one of the world's best, if not the best, macaron maker. 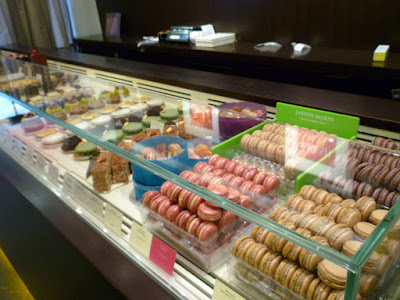 Inside the Hermé Empire. A small, sleek space and must see for any serious pastry lover. 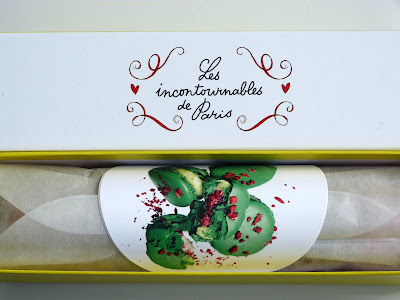 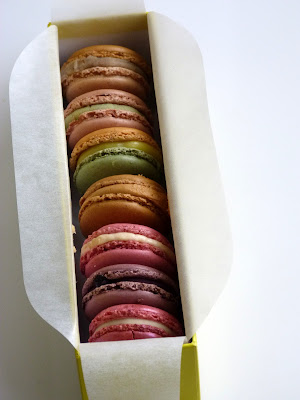 The Hermé macaron were a little bigger heftier than the others we tried, no bad thing in my book. They they have been criticised by some connoisseurs for being too ganache heavy, but overall I preferred the substantial amount of filling in these to the more delicate versions we sampled. They also looked impossibly beautiful; a mixture of bright and pastel colours with an extra touch of iridescent glitter for extra lustre. The muli-coloured mandarin and olive oil and extra sparkly Ispahan (rose lychee and raspberry) were especially charming. 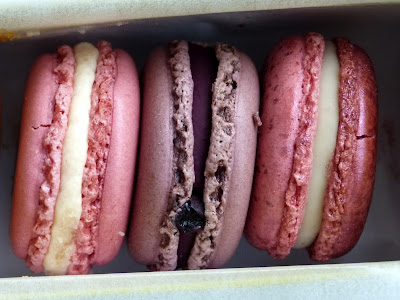 I enjoyed all of these beauties, with special mentions for the Mogador, a passionfruit and milk chocolate number; the Mosiac, a pistachio, cinnamon and morello cherry confection that was rich and rich with a fruity centre, and an especially tart and bright tasting Cassis. We also tried one flavoured with girolles, luckily the earthy mushroom taste was rather faint! 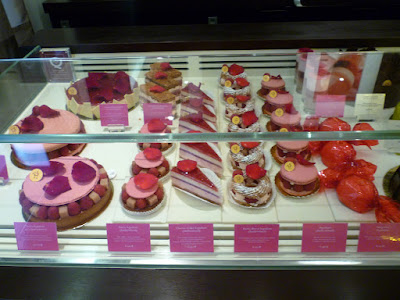 The Pierre Hermé Ispahan collection: A stunning selection of macaron, gateaux and choux pastry with raspberries, lychee and rose petals. 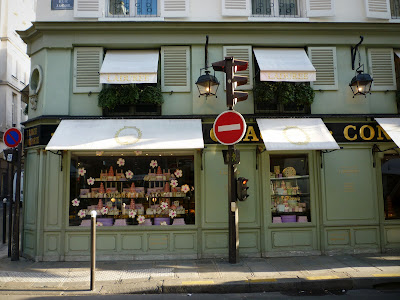 And finally the home to the Gerbet or Paris macaron, the  Saint-Germain branch of Ladurée, at the opposite end of Rue Bonaparte from the Hermé shop. Although the invention of the original macaron is disputed the first double-deckered gerbet was created in 1930in  Ladurée's Rue Royale bakery by Ladurée's cousin, Pierre Desfontaines.

They have since expanded their empire but still remain one of, if not the most, famous macaron purveyors, and sell over fifteen thousand of Desfontaines' inventions every day. 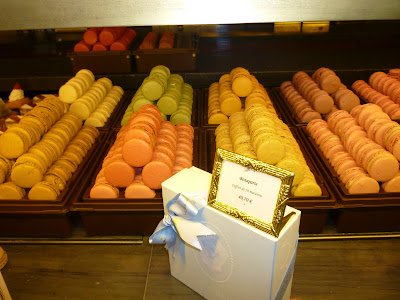 The pyramids of pretty pastel macaron at Ladurée. 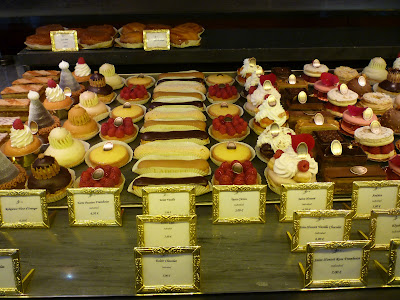 A selection of Ladurée pastries including (second left) a cassis and chestnut Mont-Blanc created for their 150 anniversary and (third left) some of their famous Ladurée Religieuses, cakes resembling a nun's habit. 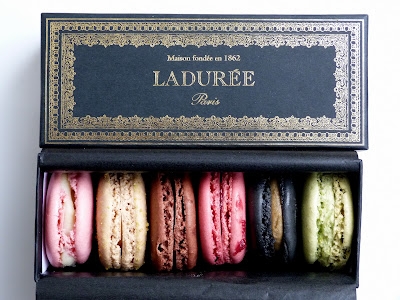 The macaron were the most traditional and elegant looking of the lot. Their gentle pastel hues evoked a more genteel age, ladies in white gloves sipping afternoon tea and indulging in a sweet treat or three. Anyway, I digress.... These little gems were sweet and simple; the pistachio was buttery and nutty, the salted caramel sweet and rich (although a little too cloying for me) and the rose gently scented without being sickly. If you want a classic box of treats to take home for your grandmother then this is definitely the place to go. 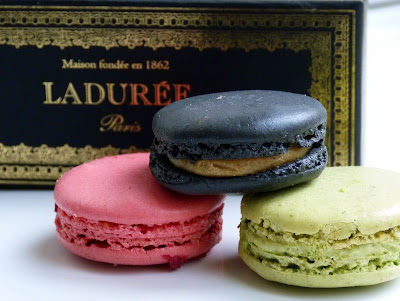 The Ladurée flavour I was most excited to try to was the Réglisse, or licorice. Despite it's menacing, black carapace I found the flavour to be somewhat insipid, a bit of a disappointment. Better were the pear and chestnut combo, both fruity and nutty, and a special limited edition Tsumori Chisato cherry blossom flavour which managed to capture the essence of spring perfectly within its sugar shell. 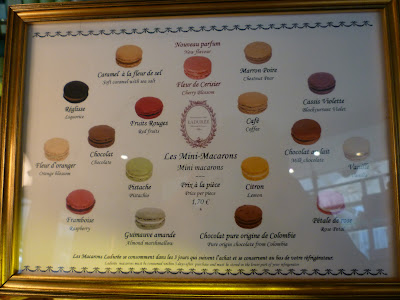 So what have we learnt overall? Well, macaron are not for the cost conscious  amongst us. These little morsels averaged out at a couple of Euros per bite. (obviously you could get twice as much value if you didn't pop them all in you mouth at once....) Despite the hefty price tag for such a small and delicate morsel I think they're worth it not for the craft and care invested in each mouthful. They also last surprisingly well; although the box informs you to eat them within three day (not usually a problem) a backlog of comestibles meant I didn't eat some of these until over a week after my return. I'm actually not sure I didn't enjoy them a little more after they had been sitting around for a while.

And for the best macaron in my tastings? They all had different strengths and weaknesses, but for me the Hermé efforts stole the show. I liked the robustness of them, found the fillings generous and the flavours quirky and fun. I also loved the appearance, striking a nice balance between the old and the new. Although there was a clear winner for me all three macaron were delicious in their own right and I would certainly recommend and afternoon in Saint-Germain-des-Prés if you want to find out for yourself. Just don't forget you wallet and an elasticated waistband if you really want to do the gerbet justice.