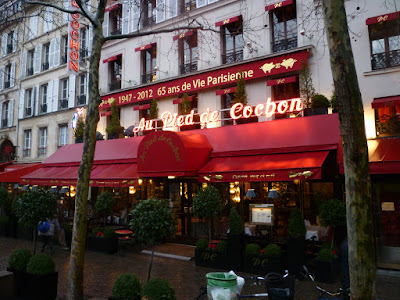 A weekend of being unintentionally parsimonious at mealtimes (thanks to some very decent menu options and sticking to good old plonk to drink) I realised we'd actually spent more money on macaron and chocolates than 'proper' food. Seeking to rectify the situation we jumped in a cab and took a trip into the bowels of Les Halles for Sunday lunch.

Au Pied Du Cochon was our destination; a legendary brasserie that first opened its doors in 1947, and has never closed them since. For 24 hours a day, 365 days a year they have been churning out huge plates of porcine parts, seafood and soups for the night owls and early birds of the city. Known for their piggie treats, including la temptation de St-Antoine (an unholy sounding trilogy of snout, tail and toes), andouillettes and rognon, even the front door handles are in the shape of trotters. 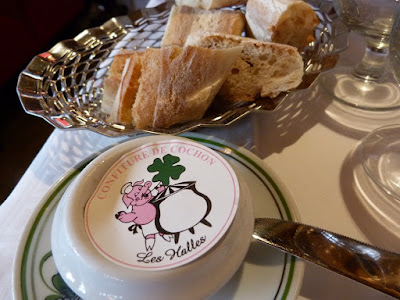 First up came some baguette and a little dish of confiture de cochon, a soft and fatty pork spread that was quickly slathered on the crisp bread and devoured with an indecent haste. 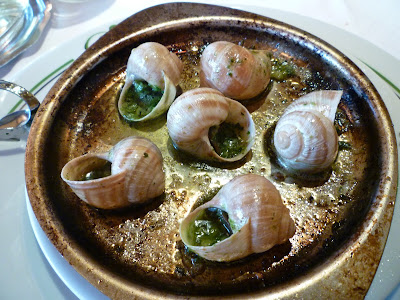 I started with l'escargot. Honestly, snails don't really do it for me, but as I was having an attack of bravado I thought I'd order some anyway. The molluscs I've eaten before have more resembled sweaty rubber bands or gristly nose-pickings than something worth savouring, but these were rather good. Admittedly half the fun came from gripping the shells with the tongs and prising the slippery curls of meat out like a mad surgeon, and nothing doused in garlic butter can really taste that bad, but I did rather enjoy chomping these down with a few chunks of crusty bread. 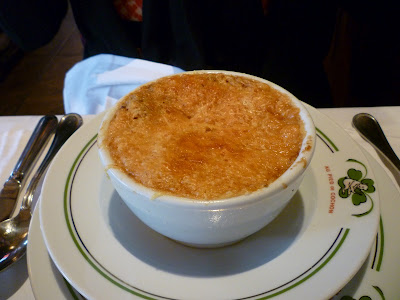 The Ewing picked the famed onion soup, reportedly one of the best in town. It came topped with a thick raft of molten cheese, and bread and an appetising fug of wine and onions steamed up when she broke through the crust with her spoon. This was an exemplary potage, ideal for a cold and windy afternoon; the stock was deep and sweet, with the edge of the alcohol cutting the richness of the cheese. 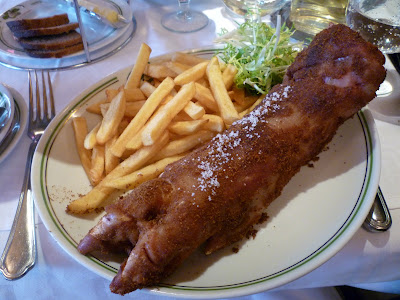 The eponymous pied du cochon in all its grizzly glory. Before bringing the dish our waiter came with a side plate for the bones, and to be honest I might have just dumped the whole trotter straight on it; by the time I had picked through all the blubber, bone chips and toe nails there was barely a shred of meat left. Although the salty, crispy breadcrumbs gave a bit of texture the whole thing was amusingly and gelationously awful. Not to be deterred I ate my token side salad and greatly enjoyed the chips dipped in to the thickest, richest Bearnaise sauce I have ever encountered. Certainly an experience, but not one I'm in any hurry to repeat. 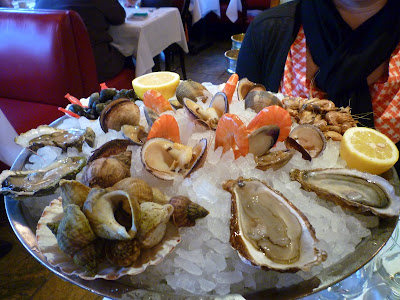 The Ewing indulged in a little seafood action with this, rather magnificent, fruit de mer. As well as three different type of oyster there was crevette grise, two types of clam, winkles, prawns and the dreaded bulot, or whelk. The last time the Ewing ate whelks we were for breakfast, served on a floating Chinese restaurant in the Docklands of London. Doused in a viscous satay sauce, it's a morning she has barely recovered from.

Manfully she put her prejudice aside and tucked in, even quite enjoying them and their smaller cousin the winkle. The oysters and clams were very good, but my absolute favourite were the brown shrimps, which I devoured in handfuls, shells, whiskers and all. 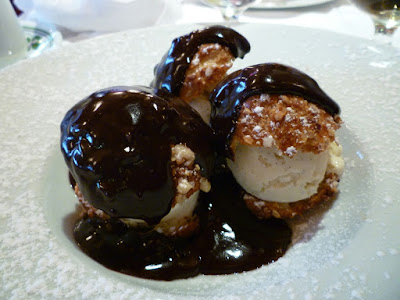 If my previous two course had been a little outre, the pud my was a nailed on classic; profiteroles with ice cream and a hot chocolate sauce. When I was growing up my mum would make these for her 'grown up' dinner parties, and I would always manage to sneak down from my bedroom to nab a few. As she now refuses my pleas to make them again I take any opportunity to get them when I can.

These were real beauties; the choux pastry had little shards of praline giving an extra crunch and the ice cream was perfectly smooth and creamy. The highlight by far was when the waiter placed the naked pastry buns in front of me and doused the whole plate in a river of molten bitter chocolate, leaving the half-full jug by my side. I could already feel the Ewing's jealous gaze from across the table. 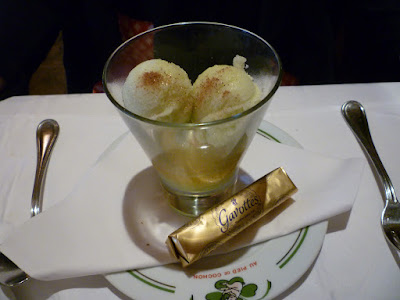 Luckily she was equally impressed by her pud, an apple sorbet with a generous shot of calvados, served with crêpes dentelle. Despite the first few mouthfuls being fierce with apple brandy it soon mellowed into a refreshing and light desert. The sorbet was particularly nice, having a slightly creamy, fluffy texture, just like the centre of a baked apple, and topped with a decent sprinkle of cinnamon.

With a very friendly waiter (who insisted in taking photos of us inelegantly eating our crustaceans) and a lively rugby crowd (it was a Six Nations weekend in Paris) our afternoon went by in a happy, greasy, sticky blur. Although the trademark dish was a rather inedible pile of bones and blubber, it was still fun to try. And after persuading the Ewing that a moderately priced vin blanc would be just as good as the top rate sancerre she was coveting, even the bill was a (fairly) pleasant surprise.

Go for the soup, the shellfish and the choux buns, say non to the trotter (unless your keen on cartildge and crunchy bits) and you won't be disappointed.
Posted by Amy at 11:22