I used to think that the day would never come 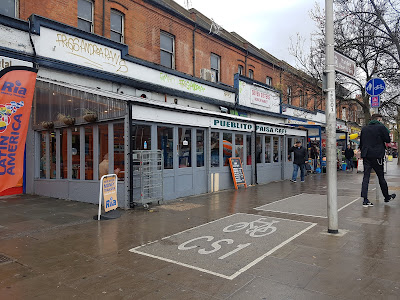 When we were planning our wedding the Ewing likes to think she was happy to let me organise everything. And she was. Apart from a steady stream of random requests – such as a suckling pig for our wedding breakfast, a chocolate wedding cake, a Vivienne Westwood wedding dress and New Order’s Bizarre Love Triangle on the playlist – that she casually threw into the mix. And, of course, I made sure she got all those things. Even BLT, which was far from my favourite New Order track. I’ve grown to love it though, as it’s impossible to hear it without thinking of looking at my wife, wide-eyed and full of excitement of starting the next chapter of our life together (or anticipating the chocolate cake at our wedding breakfast, I can never be quite sure).

Somehow New Order remain a band the Ewing has never seen live - although I saw them at Reading in ’98, where they were joined on stage by Keith Allen for a rousing encore of World in Motion, a fact I regularly like to mention to her – so she was ultra excited to get tickets for their only UK date this year, at the wonderful Ally Pally. 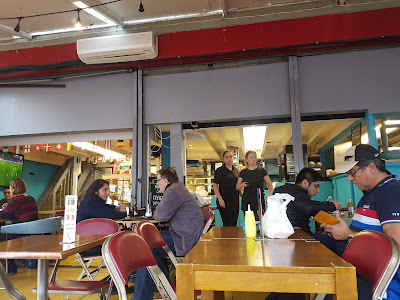 Such an auspicious occasion demanded a good feed beforehand, and so we ‘took the Victoria Line to Latin America’ for lunch at Pueblito Paisa. A thriving café that fronts an indoor market in Seven Sisters making up the heart of the South American community in North London.

Despite labouring under a recent compulsory purchase order that would see the building raised to the ground and transformed into flats, the place was buzzing on a Friday afternoon with locals tucking in to strong coffee and beef and chicken empanadas and kids drinking tropical milkshakes made with exotic fruits such as soursop and guava and custard apples. 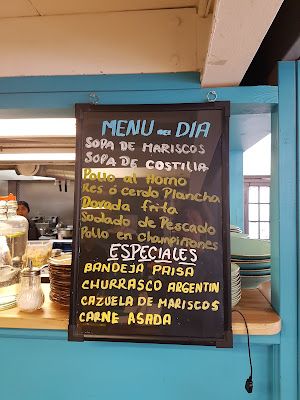 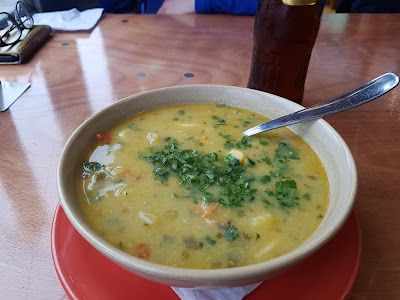 The set lunch menu, chalked up by the kitchen hatch, is just nine quid for two courses, and accordingly must be one of the biggest bargains in town. The Ewing started with a bowl of sopa de mariscos, a bowlful of creamy coconut broth, subtly spiced and crammed full of mussels, prawns and squid. Our waitress, who was an utter gem, also bought some green chilli salsa, which was delivered with a smile and a warning. Of course this didn’t stop me from scarfing some while waiting for my food. 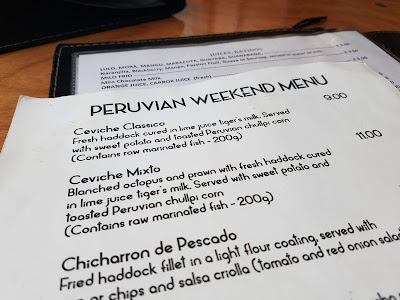 At the weekend (Friday to Sunday) they also offer a Peruvian menu with classics such as pulpo gallego (octopus with paprika and boiled potatoes) and lomo saltado (stir fried beef fillet, served with rice and chips). I chose the classic ceviche to start, possibly the most famous Peruvian export (although, a certain marmalade-loving bear might take exception to that). 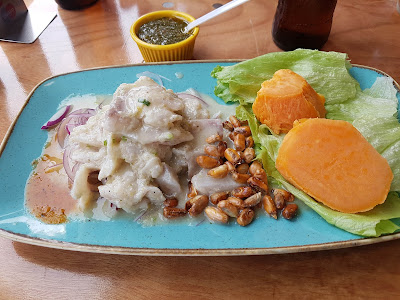 Classically made with sea bass, here they had used chunks of haddock, 'cooked' in tiger's milk, a mix of limes juice, red onion, salt and chillies, and served with a red chilli sauce, boiled sweet potatoes and the crunchy roasted corn kernels. A thrilling mix of textures and flavours served in a generous portion which meant I was happy to overlook the Ewing's straying fork. 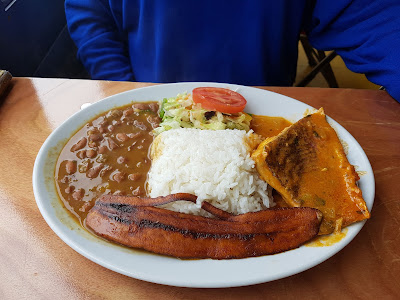 To follow she enjoyed sudado pescado, yet more fish - species undetermined, but possibly bream -  in a rich tomato and onion sauce and served with white rice, red beans and yellow plantain, for a triple carb hit. Simple yet exciting stuff with nicely cooked fish, earthy beans and sweet banana. 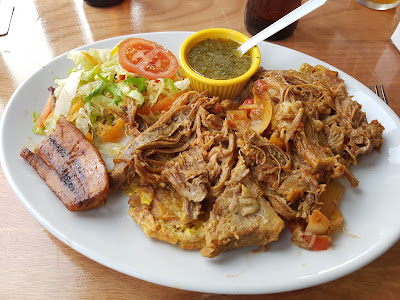 I also had plantains for my main (from the Columbian starters menu), but this time served as patacones; discs of starchy green banana that are fried once before being pounded until flat and fried again. On their own, they are an acquired taste, rather bland and starchy, but mine were improved by being served con carne desmechada, or with shredded meat. Usually beef, here I think it was pork shoulder, slow cooked until it broke down into a tangle of spicy shreds. 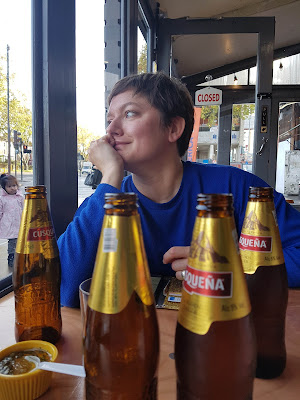 Despite our best intentions to not let lunch become an all afternoon boozing session, our waitress was very persuasive when offering to brings us more icy cold Cusquena, gleefully encouraging us to clink bottles 'kiss, kiss!' every time she bought us another round. 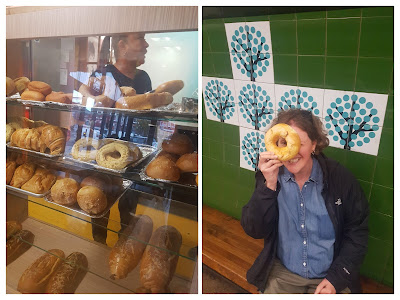 Several beers later we finally peeled ourselves away from our window seat vantage point, watching the hustle and bustle of the Tottenham High Road, but not before we had picked up some pandebono, or Columbian cheese bread, and some guava and duclce de leche stuffed doughnuts, which lead to a 'Roscoe with a roscon' moment, pretty amusing when you are already half cut at half four in the afternoon. 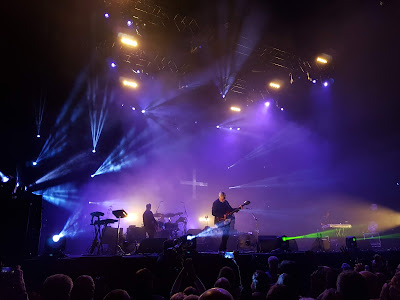 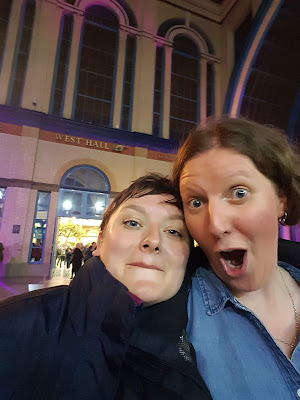 And New Order? Simply perfect; two and a half hours of peerless pop, taking in the Balearic beats of Vanishing Point, the driving guitars of Crystal and the irrepressible indie charms of Your Silent Face, before ending with a trio of Joy Division tracks. And, of course, a rousing rendition of Bizarre Love Triangle. No, I've never met anyone quite like you before...
(Me neither and I love you very much. Thank you for planning our wedding and giving me everything I ever wanted - TE).