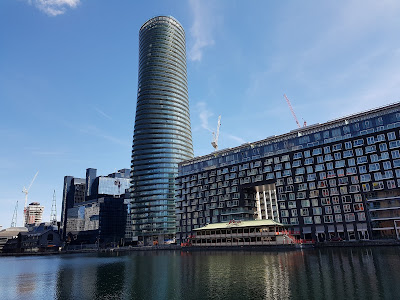 It’s been a little while since the Ewing and I have been out for Dim Sum Day, but a visit down south from my Aunt and Uncle in Yorkshire, combined with the news that my aunt’s favourite yum cha stop in Leeds - Ho’s on Vicar Lane - has closed, made it easy to decide what we were going to eat.

Where to eat was scarcely more problematic as we had also recently discussed walking across the Isle of Dogs - home of the Lotus floating restaurant, sitting on the Inner Millwall Dock - and under the Greenwich foot tunnel. Its curious waterside location, in the shadow of Canary Wharf and the looming Baltimore Tower, made it the perfect starting point for a Sunday stroll to the South of the River, as well as being a curiosity in its own right. 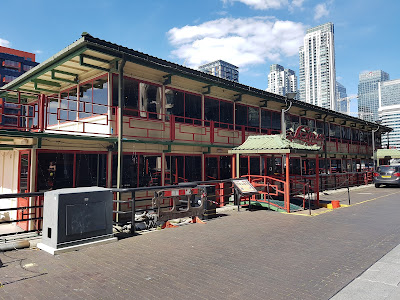 The last time I visited was in the dark and distant past, before I started writing the blog. An almost mythical time where I still took lots of photos of my lunch, but didn’t post them on Instagram or write about it afterwards. I do remember the meal though, if only for the reason that a rather bullish the Ewing ordered curried whelks, being quite adamant that ‘I like all types of seafood’. It turns out that this precludes whelks, a lesson she has learnt from, unlike me, who persists in ordering strange gristly, knobbly bits of protein whenever I see them. 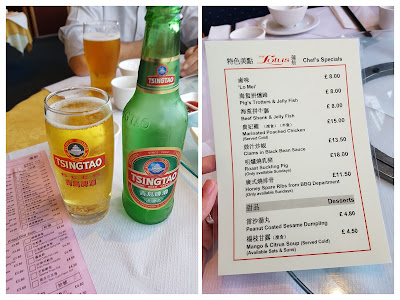 Sadly, the whelks have gone, although they still offer cold baby octopus in curry sauce alongside chicken feet and Sunday specials including jelly fish, trotters, honey roast ribs, and beef shank, which I thought sounded pretty interesting, but was dissuaded from trying by the voices of reason. 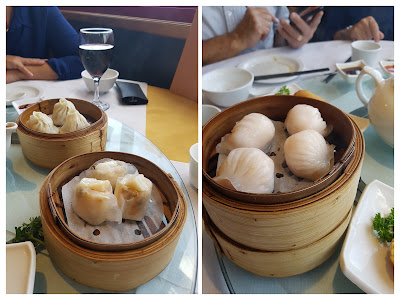 In the end we stuck to a more prosaic array of dumplings – there’s nothing wrong with the classics – that included delicate scallop with the crunch of water chestnut; shui mai, with their fluted open tops and minced pork and shrimp filling; virginal har gau, stuffed with bouncy prawns (still my fave); and fragrant Chinese chive, the jade green flecks showing through their translucent wrappers. 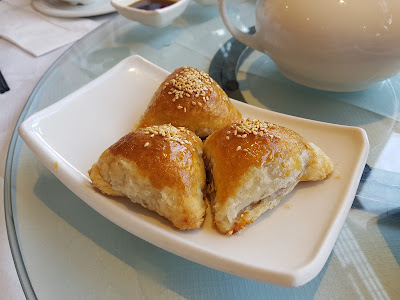 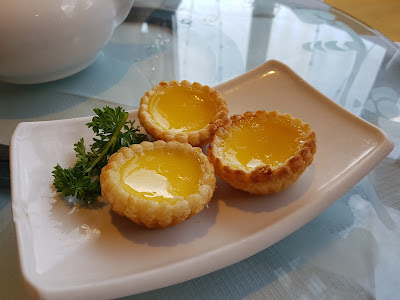 Customary custard tarts were just so-so, although I still always love the fact eating pudding in the middle of your main course is thoroughly encouraged during a yum cha feast, even if they came garnished with a thoroughly retro sprig of curly parsley. 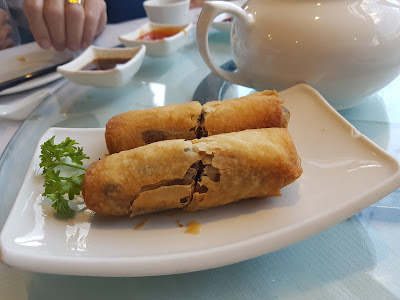 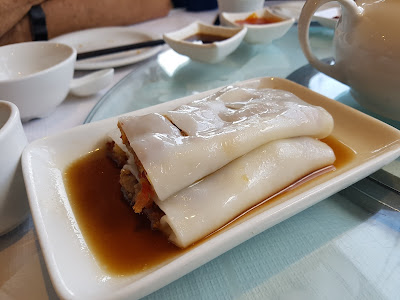 There were also rolls – deep-fried wonton pastry filled with rich shredded peking duck and hoi sin sauce, and slippery cheung fun filled with sweet shredded pork in a pool of tangy black vinegar and a crispy beancurd and prawn roll that was snaffled before I could get a pic. 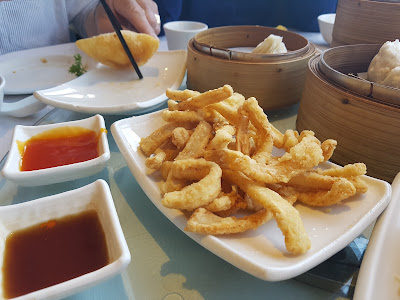 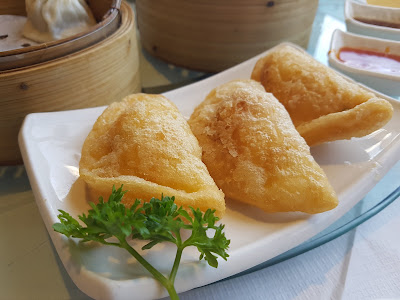 And we finished things with an array of fried things including batons of crispy salt and pepper squid, my Aunt's favourite, and some slightly oily prawn croquettes that benefited from a liberal dredging in perky chilli sauce. 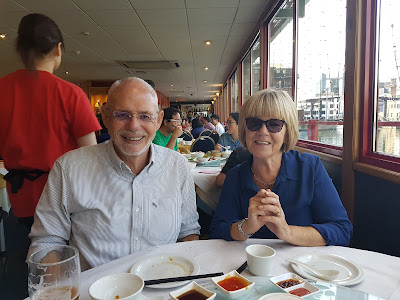 Overall the food, while not quite up to the location, was a step up from many jaded Chinatown stalwarts, and service efficient and friendly, despite there being a full house, and everything was ably washed down with pots of very good jasmine tea, icy bottles of Tsingtao and pints of draught Sun Lik. Prices all seemed pretty reasonable, around the four quid mark for each dim sum dish, although I’m not sure what the total damage came to as my Uncle, very kindly, treated us. 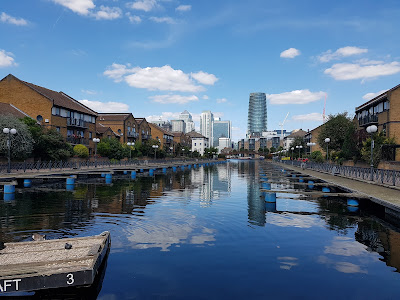 Best of all was the postprandial stroll with lovely people in the glorious sunshine afterwards; the stillness of the city shimmering on Dim Sumday.
Posted by Amy at 21:50