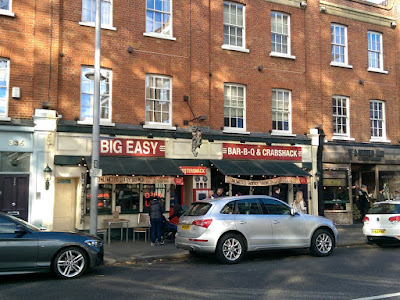 As the #brutaltour rumbles to its concrety conclusion (fear not, the promised round up is coming in the New Year), one of the best things about it - apart from all the wonderfully hulking buildings - is the chance to see some erstwhile unexplored corners of town. And a Sunday visit to look at the brilliant red brick of the World's End Estate in Chelsea meant I could finally take the Ewing to the original branch of the Big Easy, stalwart of the Kings Road, for their bottomless Sunday brunch. 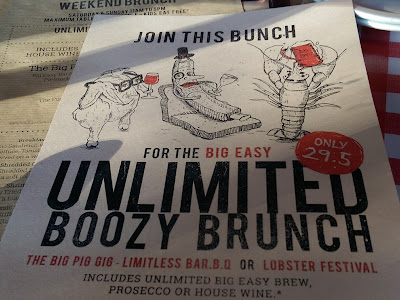 As well as the lure of limitless (with a few, sensible, caveats) alcohol, they also offer the option of the 'pig gig' - limitless barbecued meat and sides - or the 'lobster festival' - a pound of lobster served in the shell with lashings of garlic butter; mixed with mayo and stuffed in a fluffy brioche bun, or chopped up and baked with macaroni cheese. 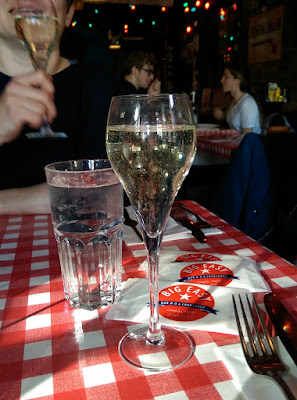 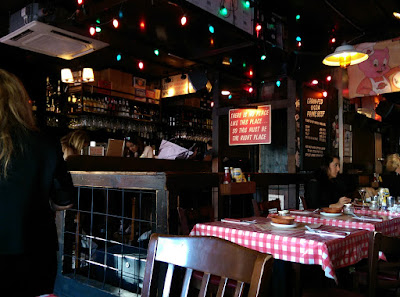 After a frustratingly thirsty pause after being seated, we finally started with a glass of bubbles - Big Easy brew, house wine and frozen mojito slushies are also available with  brunch, and can be mix and matched throughout you meal for maximum hangover potential.

Interior wise it's a comforting sort of mishmash, reminding me of somewhere between the original Chicago Rib Shack in Knightsbridge, where my parents used to take us for a special treat back in the 80s, and a cosy French bistro; albeit one with a pig mural painted over the walls. 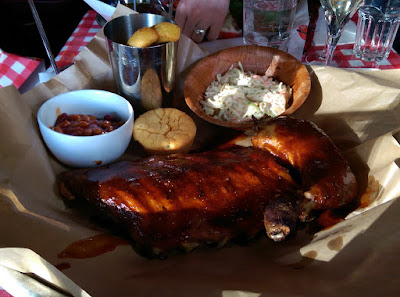 Ordering the Pig Gig brought a tray of barbecue chicken, baby back ribs, slaw pit beans, fries and fresh cornbread muffins. Like the decor, the food reminded me of meals from my childhood; soft meat bathed in a sticky sweet sauce. Authentic 'cue? Probably not, but still pretty tasty in a pleasingly nostalgic way and I managed two portions (with a little help from a friend).

Slaw (we seem to have lost the 'cole' since I was a kid) and beans were decent, but the fries were more like chunky oven chips. A childhood staple I'm not so wistful about. Best of the sides was the sweet, crumbly muffin; like having pudding with your dinner. The perks of being an adult. 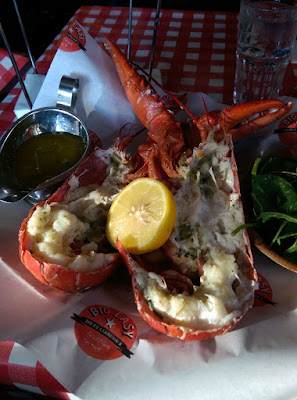 The Ewing chose the lobster - she pimped it to a pound and three quarter specimen for an extra fiver - served with fries, although ours failed to materialise, and a side salad. A decent specimen, if a touch woolly, that involved much concentrated cracking to extract every morsel of crustacean. All while I attempted a one-sided conversation across the table. A standard Sunday, really. 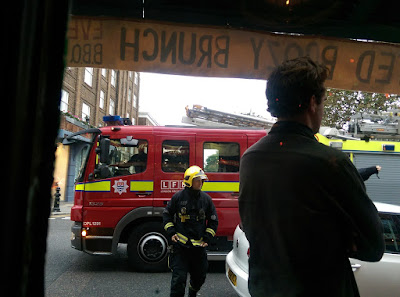 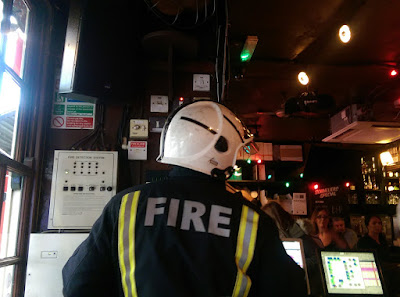 Earlier in the afternoon, as we sat down at the table, the Ewing noted the sheer number of the fuse boxes and control panels on the wall, with their alarming number of buttons and wires. A prescient comment as, just as we were finishing our food, the fire alarm started up, followed five minutes later by two trucks (by half the crew of the Chelsea fire station.

Throughout the thrilling episode we continued to doggedly munch on our remaining ribs - reasoning we were close enough to the window to make a quick escape should we see actual flames - and it was faintly reassuring to see that the guys in flouro stripes looked initially as bamboozled at the proliferation of switches and dials as we had, even if they were soon quick to identify and fix the fault (and get a round of applause for doing so, well done them - TE). 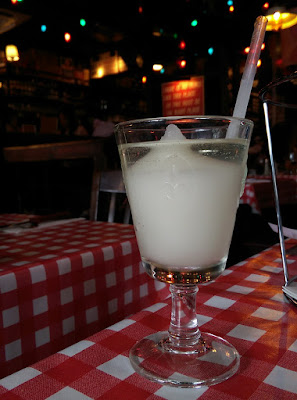 It was at this point - with the alarm still blaring but now with a bit of added eye candy, to distract us - the cocktails began to flow much quicker, and unbidden, from the bar. During one overlap between rounds I even managed to top off my frozen mojito with proscecco. Praise be for welcome distractions (and multiple alcoholic drinks dispensed from a slushy machine). 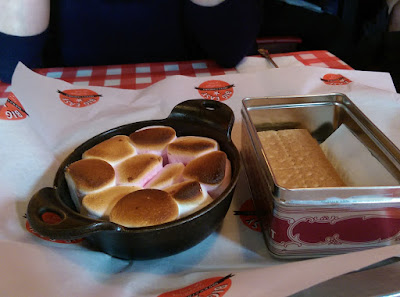 Multiple mojitos also left us vulnerable when the pudding menu appeared and the lure of the S'mores fondue proved irresistible. A cast iron dish filled with a raft of burnished marshmallows, bobbing on a lake of molten chocolate and served with a tin of graham crackers - the thinner, rectangular American cousin of the digestive - for dipping. This was very simple, very sweet and very good. 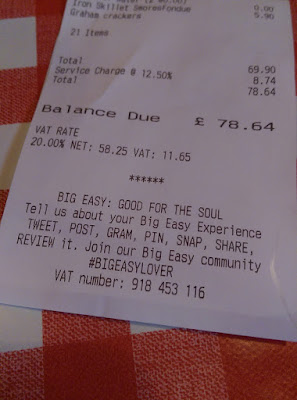 Service, at 12.5 per cent, is included, but that didn't stop our waiter - competent enough, if a little distracted throughout our meal - asking if the Ewing wanted to add another gratuity for him as the 'the first one is shared amongst all the staff'. An irritating, but apparently common occurrence here and one that even befell Grace Dent when she reviewed it in the Evening Standard; she wasn't a fan of thee practise (neither was I - TE) or the food... My tip? Come for the cocktails, crustaceans and 'cue but double check that bill.