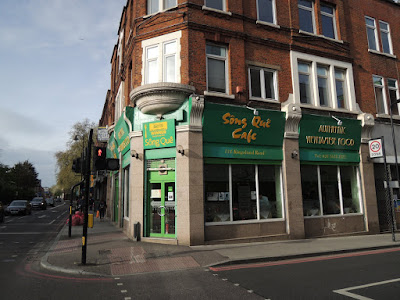 One of my most endearing memories of the Ewing is from when we visited Song Que for the first time - eight years ago, on the first of her birthdays that we spent together - and she ordered the prawn rice paper rolls. I still remember her sheer unbridled joy at the arrival of the crustacean, vermicelli noodle and herb-stuffed cylinders; in fact, I’m still not sure I’ve ever known anyone quite so happy with a new discovery since my cousin tasted chocolate cake for the first time and broke down in a sugar-crazed frenzy that, decades later, no one has quite let him forget.

Happily, the Ewing is still just as awed by the simple things in life (hence why she married me) and was equally excited to return for another helping of summer rolls - and a few cold Saigon beers - for the auspicious occasion of her most recent birthday. 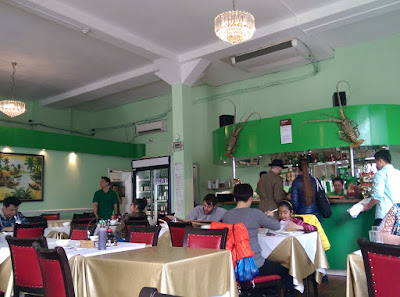 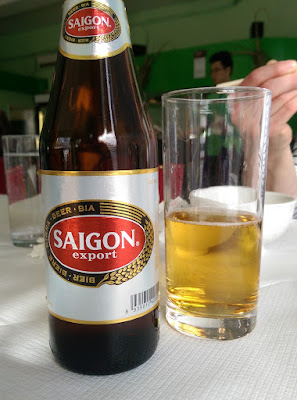 Not much has changed since our last visit, save a few grey hairs and a couple of crow's feet (speak for yourself - TE), and the distinctive green frontage remains a stalwart on the Kingsland Road, London's mecca for lovers of Vietnamese. It's also next door to the wonderful Geffrye Museum, a homage to the London home through the ages housed in 18th-century almshouses with a wonderful walled herb garden and plenty of room for a picnic on the front lawn if spicy food isn't your thing. 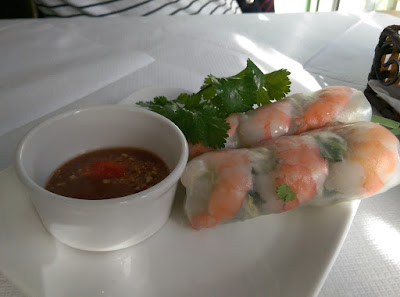 After a happy day featuring a salt beef bagel breakfast from the near by Brick Lane Beigal bake, followed by an afternoon admiring the blooms on the Columbia Road and appetite-sharpening at the Geffrye, our plate of prawn summer rolls were ordered with keen anticipation.

If I was being fussy the swift delivery, coupled with the fridge cold temperature and slightly gummy rice wrappers, suggested they had been pre-made a while earlier, All was forgiven, as they were very good - maybe not quite a Proustian madeline moment, but delicious nevertheless, especially when dipped in the moreish sweet peanut sauce alongside. 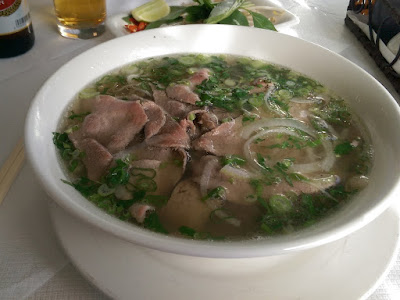 The main draw at Song Que is the beef noodle soup, or pho (or fur, if you want to be linguistically correct or smugly irritating). Firstly, I’m not really a fan of noodles in soup (especially rice noodles) as a general rule – too wholesome, too difficult to eat - but this is the dish they are famous for, and it’s the dish I ate last time I was here, so I felt duty bound to order it to recreate the experience properly.

Here it comes with beef steak, beef flank, beef tendon and beef tripe; or any combination of the above. The first time I tried it I shied away from the tripe, reckoning the glassy strips of cartilaginous tendon would be enough to deal with. This time I was more bullish (see what I did there) and went for the classic combo, reasoning - rather unreasonably considering my track record with ordering strange body parts - that I would barely notice the tripe with all the other good things bobbing about in my bowl. 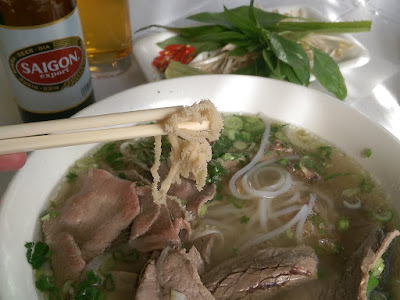 Of course, what was the first thing I dredged up when the steaming broth arrived, a huge coil of the stuff, that wound round my chopstick in a manner of a giant octopus clinging the hull of a ship. Well, maybe not that dramatic, but it still looked pretty menacing. So I did what I always do when faced with unmentionable things; doused it in chilli oil (err, asked if I wanted to help you eat it more like - TE).

It would have helped to know at this point that Vietnamese chilli oil, or at least the version at Song Que, is not the sugary, MSG laden stuff I normally eat surreptitiously straight from the jar. This was pure, adulterated heat - meaning I couldn’t really taste the tripe, or feel my tongue for that matter. After the spice had died down, it all proved far less fearsome than I had feared especially after I flung in the dish of fresh herbs and beansprouts that accompanies each bowl and added a healthy spritz of lime. I’m still not keen on rice noodles, though. 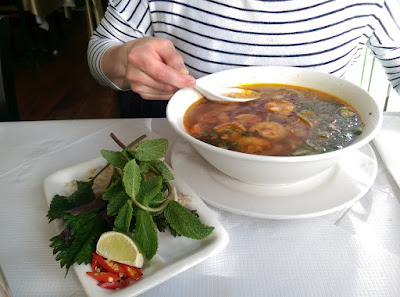 The Ewing also chose noodles in soup, but this time egg noodles with a spicy broth with king prawns. Already an unusual choice for someone who isn’t keen on too much chilli, she then seemed to lose leave of her senses entirely and eat a piece of the accompanying chopped birds eye chillies. I was denied photo evidence, but much sweating and swearing while squinting at me through mascara-smudged eyes ensued. Yes, there is a pattern to our stupidity. 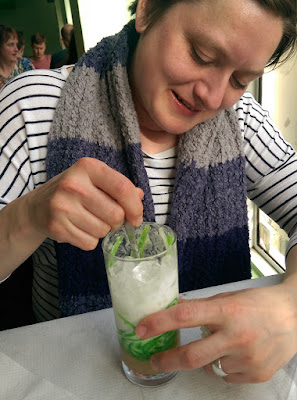 Fortuitously, south east Asian deserts seem to be designed as a salve for burnt mouths and the Vietnamese three colour desert, che ba mau, is no exception. Layers of sweetened beans (here resembling Heinz finest) pandan jelly and coconut milk, topped with crushed ice and served to be mixed into a unholy mess tableside.

As far as these kind of things go, I found it strangely enjoyable. The sugary beans working with the floral notes of the jelly and the cool, bland coconut to make a sweet and soothing ending to the meal. And just look at that little face; still never as happy as when she's found something new to scoff. 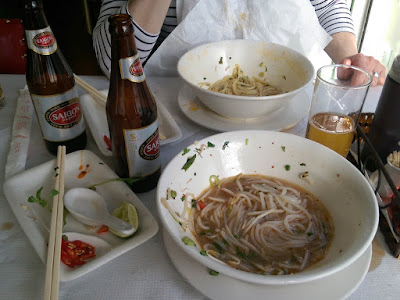