Robbers and Cops - Regency Cafe and the MOJ 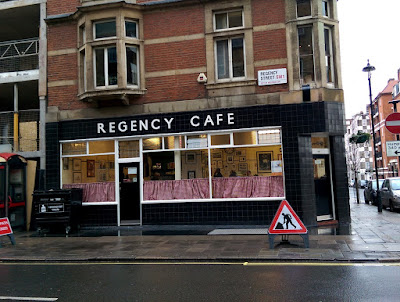 I've got an idea... Why don't you come 'round for breakfast? I'll squeeze some orange juice and grind some coffee and we can talk about this like adults. How's that sound?

Anyone that's familiar with the British crime caper Layer Cake may remember a pre-Bond Daniel Craig quoting the above line to a Serbian drug dealer who's on the hunt for a million missing ecstasy tablets. Even if you don't remember the intricacies of the script, then there's a good chance you would recall the scene filmed at Pimlico's legendary Regency Cafe, where a 'business breakfast' ends in an unfortunate incident with a kettle. 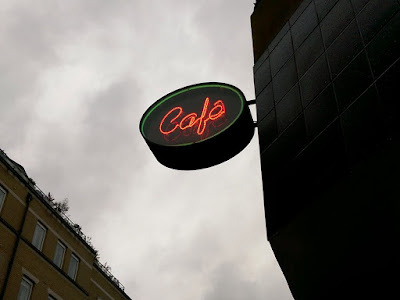 While our early lunchtime visit was far more amiable, nothing much else has changed; from the formica table tops to the plastic sauce bottles to the art deco tiling to the signed Spurs photos from the 60s, you could genuinely imagine eating here at any time during the last five decades and the décor being exactly the same -  preserved in aspic, just like the corned beef in their salads.

Sure you can no longer enjoy a woodbine with your cup of tea - served here the colour of creosote (THE best colour for tea - TE) - but the food, from the steak pie with virginal boiled spuds and processed peas to the fish and chips served on a Friday, is unapologetically untouched by modern convention. 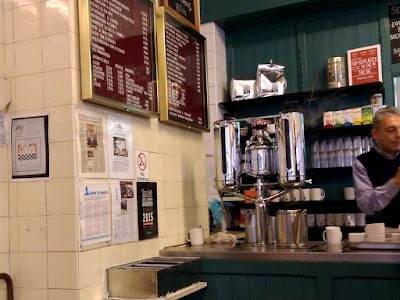 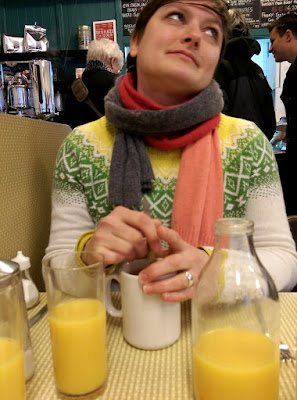 As well as an expertly stewed cup of splosh, dispensed from the ornate urn on the counter, there is also orange juice in glass bottles. Anyone who ever woke up to the clank of the milkman collecting the empties will share my nostalgia for the joyful ritual of shaking a bottle fresh off the step, before putting your thumb through the foil top. Happy days.

Our family only ever had milk delivered, so I was rather jealous to hear the Ewing’s mum also ordered orange juice for their breakfast when she was growing up; I’d have been very jealous if I’d found out she’d also had the little pots of Ski strawberry yoghurt. 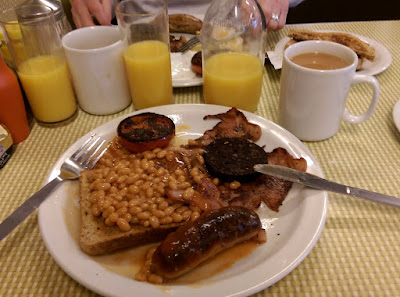 The aforementioned homemade pie looked majestic, but who could pass up a lovingly crafted fry up - nothing’s getting grilled here. Here the standard English comes with either baked beans or tomato (both fresh and tinned are available) toast and tea or coffee. I added extra black pudding and shifted my egg over to the Ewing, although sadly they had already run out of bubble and squeak.

For my money, this is exactly what a full English should look like; no avocado, no rocket (although I did notice my toast was made from brown bread) no fuss. The bacon was particularly noteworthy, although probably down to the fact it had been properly cooked on a well-seasoned flat top, rather than the provenance. 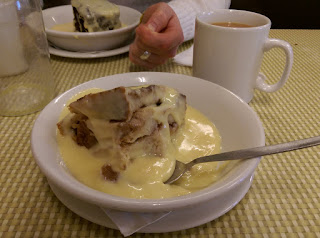 I’ve never knowingly turned down a stodgy school dinner-style pudding with custard, and here was no exception when I saw they had bread and butter pudding with cinnamon. Needless to say, my soporific tower of baked buttered bread, interspersed with plump raisins and spice and cloaked in a thick blanket of Bird’s finest made a fitting end to our meal.

The Ewing wasn't complaining too much about her chocolate sponge with chocolate custard, either. Both yours for two English pounds; we even got two free unclaimed cuppas thrown in to wash it down. 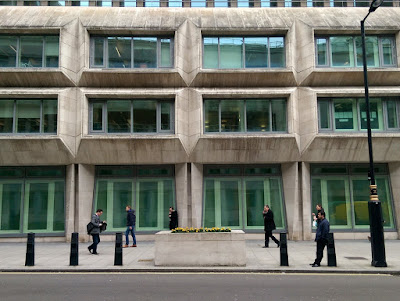 Our slap up feast was followed by stop four on the #brutaltour, my ongoing mission to visit all 54 buildings on Blue Crow Media's map of Brutalist London with a trip up the road to marvel at the wonderful Ministry of Justice. Designed by Fitzroy Robinson & Partners, with Sir Basil Spence and completed in 1976, it stands out as a bold but fascinating chunk of modernism with it's fishtank windows and main tower that was, apparently, based on medieval Italian castles. 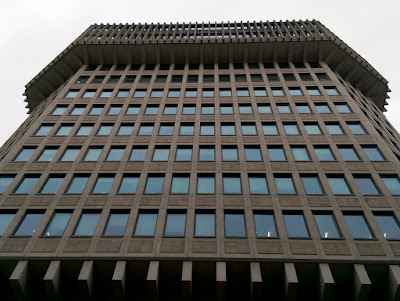 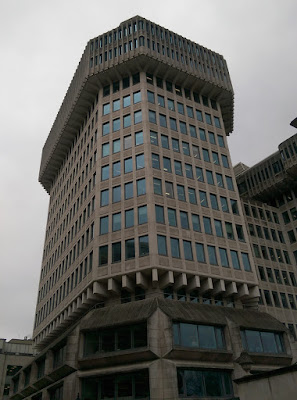 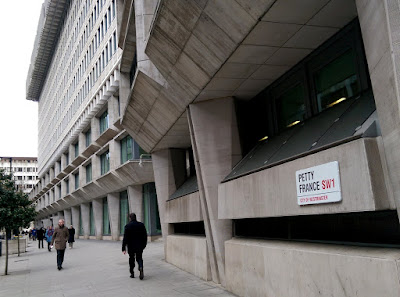 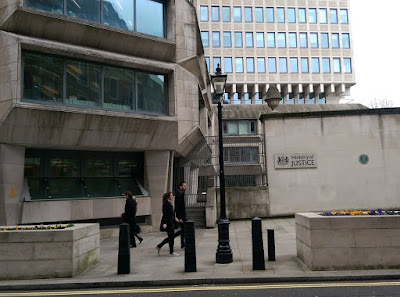 The last time I was here I was on the way to being late to my own wedding and had been told, in no uncertain terms, that there was no time for dawdling (although we still had room for a swift half before the ceremony. Also known as getting your priorities right). This time I had plenty of time to browse and found it interesting to see the contrast between the Regency Cafe, scene of a British crime drama, and the MOJ, brutal heart of British justice.

Built only thirty years apart, but a lifetime away in style and form, they both remain notable for different reasons; two nostalgic nuggets of London's recent history that's slowly being eroded by gaudy colored boxes and spiraling towers. As XXXX said in the film; 'when I was born, the world was a far simpler place. It was all just cops and robbers'.
Posted by Amy at 07:00