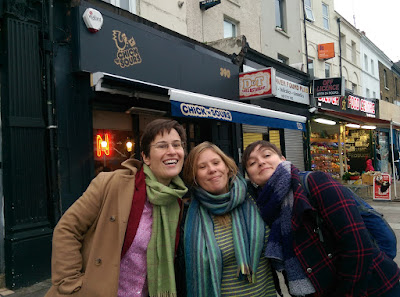 Born in the Badlands of Brent and raised in the rolling Chilterns, I've always been, as Neil sang, a West End Girl. So when Carl Clarke - of Disco Bistro fame - opened a chicken shop on the Kingsland Road it pitted my love of fried poultry with my inherent dislike for convoluted trips across London with TFL.

For a while I held out, but after enduring a Twitter feed full of sticky wings and Weetabix soft serve, coupled with the plaintive pleas from The Ewing (who rates fried chicken on a par with me and only just behind chocolate and the cat), we roped in Stealth and Regina, an East End Girl, for brunch. 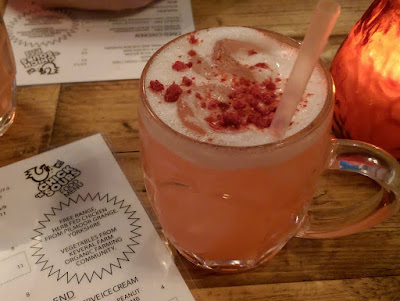 The name suggests, they've got a keen eye for the cocktails too, with the specialty being sour-style libations served in half pint pots. I stuck with the house sour, which featured gin; lemon; raspberry and chilli vinegar; and freeze dried raspberry, while the rest of the table honed in on the regularly changing guest list with the stand out being a a bourbon based mango and balsamic number. 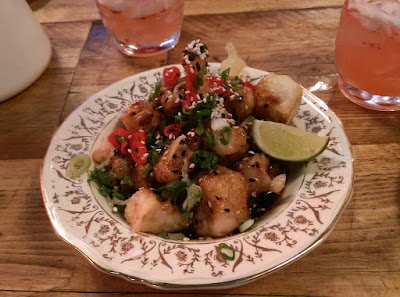 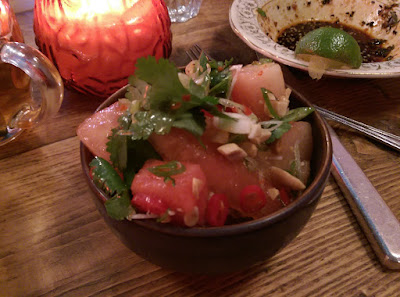 The Szechuan aubergine - cubed and tempura battered before being tossed in a soy and miso glaze - was about the best thing you could do to an eggplant. So good we ordered two portions, and not just because The Ewing has vowed never to split food with Stealth after the unfortunate 'sharing' platter incident at the Doghouse in Kennington before I even started writing this blog.

We also shared a side of watermelon with peanuts and coriander and chilli and fish sauce; all things that probably shouldn't work when mixed together with chunks of fruit, but strangely did. 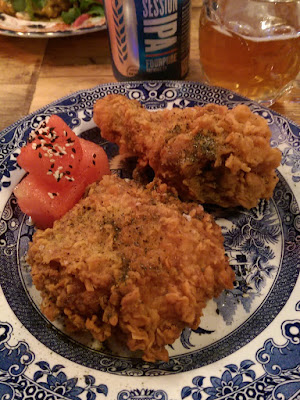 I had been eagerly waiting to try the House Fry drumstick and thigh, served with 'seaweed crack' and more chunks of pickled watermelon. After vicariously cyber-consuming this countless times on social media, I only hoped the reality could live up to my fowl-based fantasies. Thankfully it was even tastier; knocking Colonel Sanders grizzled offerings into a cocked bargain bucket.

A crisp shell of seasoned batter gave way to chicken pieces I would have described as being on steroids (both because of their size and my predilection for lazy cliches), if I didn't already know were from free range organic birds raised on Pilton Grange in Yorkshire. And whilst the seaweed seasoning had the appearance of the contents of an errant ashtray it certainly deserved its class A moniker, being a full on umami-bomb. 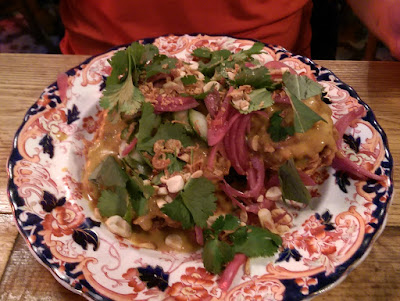 The Guest Fry on this visit was spicy satay; a House Fry drumstick and thigh smothered in a creamy peanut sauce, crunchy red onion and a thatch of coriander and thai basil. A serious plate of food which, again, managed to tame all the big bold flavours into a harmonious whole. 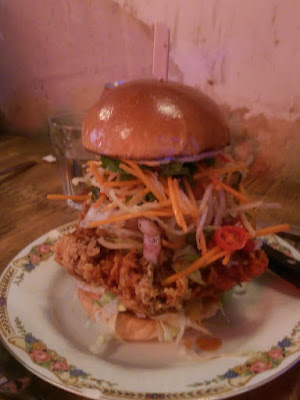 Thumbs up, too for the packet of Huggies baby wipes that arrived with it and were much needed. I probably should have used one myself, being as the above photo is rendered in a soft glow focus thanks to the greasy fingers on my phone camera lens. 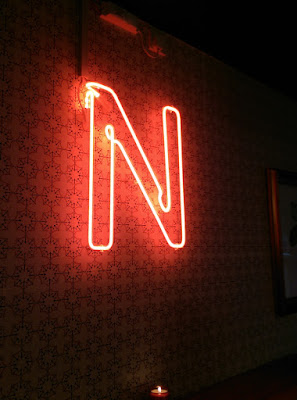 Yes, fried chicken restaurants in the Capital might be as ubiquitous as conceded Spurs goals, but far more fun. And with excellent cocktails, superlative poultry and a soft serve menu I must return to sample (hopefully before the matcha, banana and sesame flavour is replaced) it's worth braving the 243 to Wood Green for.