Bites: Gone to the Dogs 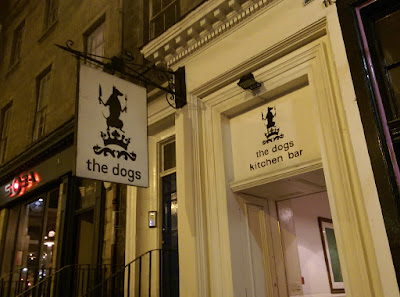 When I was younger my parent's used to tell us the story of their honeymoon - taken at the holiday park in Ilfracombe, Devon - where the newly married couple pressed their noses against the glass of a restaurant in town and dreamt of coming back and eating all the fancy seafood dishes they couldn't afford. By the time me and my sister were born the family finances were much improved, but this bittersweet and touching tale remained a favourite.

Which brings me to David Ramsey's the Dogs - recently opened on our first visit, now a doyenne of the stripped back food scene - where I stood outside with the Ewing exactly six years ago - not quite penniless, but certainly rather financially constrained - and dreamt of going inside for dinner. (While, ironically, the Dogs may be known for their value grub, our diet on that trip mostly consisted of stocking up on unseemly amounts of hotel buffet breakfast followed by scotch pies and snowball cakes.) 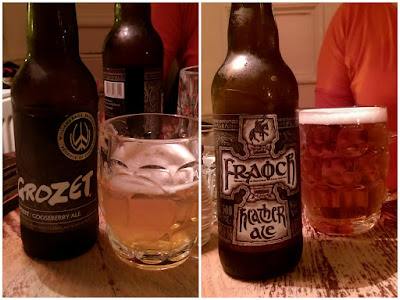 But, as Gabrielle sung, dreams can come true; so after a long and slightly soggy day in Auld Reekie, a change of socks and forty winks, I was looking forward to a few beers and a menu that 'champions Scottish and British ingredients, in dishes that will comfort and excite'.

Staying with the Scots ale trail theme we both chose Williams Bros beers; Grozet a gooseberry-infused wheat ale, for me and the Fraoch heather ale for the Ewing. The latter was particularly interesting, being based on the Gaelic recipe for 'leann fraoich' (heather ale) - purportedly the oldest style ale in the world - with it's peaty, malty notes. 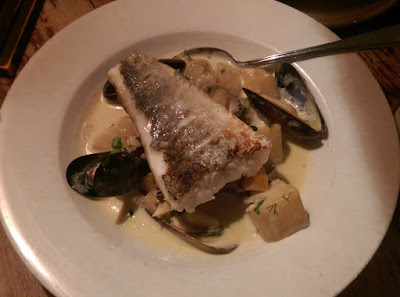 Perfectly pan fried hake, sat atop a pile of cockles and mussels in a creamy, dill-flecked broth bobbing with chunks of potatoes and turnips, was as lovely as it's list of ingredients suggested - the only thing missing being a hunk of crusty bread to mop up every last drop. 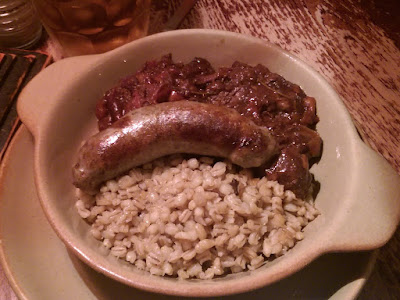 The 'venison, sausage casserole and barley' was a gratifyingly simple affair. The deer had been slow cooked to a sticky sweetness alongside winter veg and while the Scots have a penchant for beef sausages - one of the only things the Ewing is not keen on (the other being me singing 'Saturday Love') - this was served with a pork snag and a big mound of fluffy, spiced barley to soak up all the gravy. 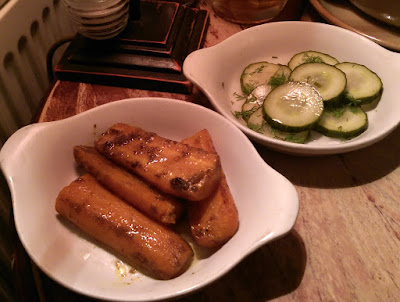 Side orders of honey roasted carrots and in-house pickled cucumbers hit the spot, the zingy cukes being a surprisingly good match with both the venison and creamy fish broth. In an attempt to eat as much of the menu as possible, we also asked for roast spuds with bacon, although were probably rather relieved the order didn't make it to the kitchen. 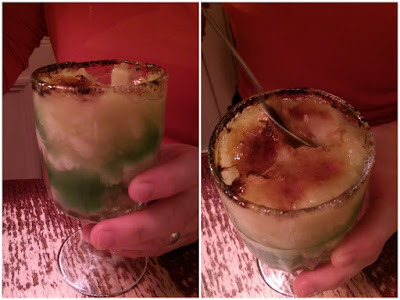 The Ewing's green apple trifle was a sight out of the seventies, with it's wonderfully bright swirling layers and crisp bruleed top. Despite the lurid appearance and the slightly incongruous choice of filling (an apple never strikes me as a particularly 'trifle-able' sort of fruit) this was great fun. 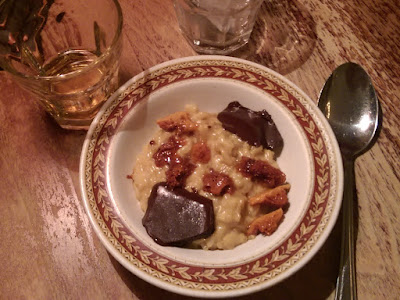 Toffee rice pudding, mined with chunks of honeycomb and dark chocolate, was as close to a hug in a dish as is possible. Add a wee dram of of Macallan 10 year fine oak and I was very glad I was on the inside looking out.