Dumplings Legend and a Sandwich 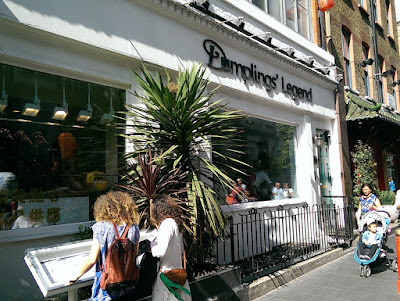 Some things just go together; strawberries and cream, Bert and Ernie, Tottenham Hotspur and a late conceded goal; but one of my favourite pairings is still dim sum and cold beer. Preferably enjoyed on a lazy Friday afternoon off work, with the sun streaming through the window and my wife for company (and to fight over the 'odd' buns with). 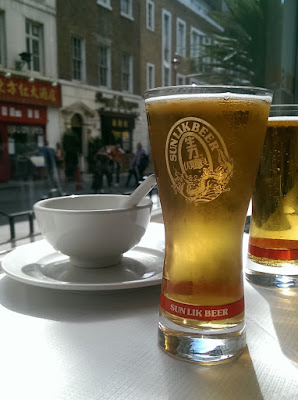 Fortuitously, this was the very pairing I was able to enjoy a fortnight or so ago, when the sun was still high in the sky and summer still felt as if it was 'just around the corner', rather than the dew lined lawns and conker shells that I have been waking up to this week. Oh, the fickle vagaries of my beloved English seasons.

Our destination was Chinatown; a much maligned stretch of the West End but still the first place I head if I need to stock up on slices of lurid pandan cream cakes, or waffles shaped like fish and stuffed with red beans, or piles of crispy duck and pork belly or glasses of milky Taiwanese bubble tea filled with bobbles of black tapioca spawn. Basically anything I can eat, and a few inedible things that I've tried to. 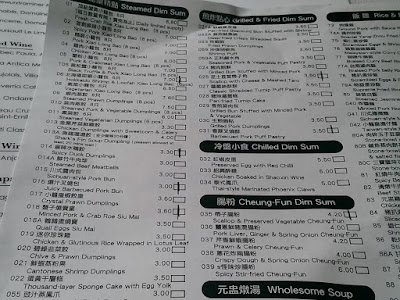 While your certainly spoilt for choice, choosing a somewhere to eat in this part of town can be a bit hit and miss. For every 'authentic' spot, featuring hand pulled noodles or windows full of lacquered roast meats there is an all you can eat buffet, with its endless trays of gloopy sweet and sour and beef in black bean and desiccated spring rolls; more confusingly they are often found in the same restaurant.

We chose Dumpling's Legend, smack dab in the middle of the bustling Gerard street and famed, unsurprisingly, for it's dumplings. The restaurant is part of the Leong's Legend chain, whose Bayswater branch I first blogged all the way back in early 2011. For the record I'm still digesting that toast casket. 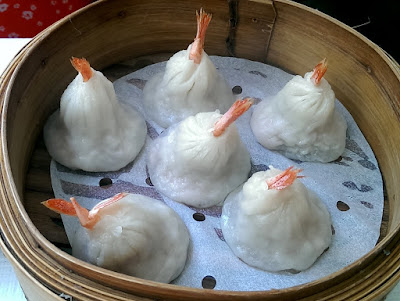 We chose a selection of eight dim sum from a good-looking lunch menu - for those not in the mood for buns and rolls there's also a selection of soups, rice dishes and curries - including Malaysian chicken and braised beef brisket - and the whole gamut of noodles from fried Shanghai-style seafood udon to a fiery dan dan mian with minced pork and a raft of chilli oil.

What DL are really famous for, though are the xiao long bao, or 'soup' dumplings. A dish hailing from the Jiangnan region of China, especially Beijing and Wuxi. We chose the Hokkaido shrimp and chinese loofah stuffed version, although they also have a limited amount of fresh crab roe dumplings available each day alongside standard pork and prawn, spicy pork and a pork and truffle special. 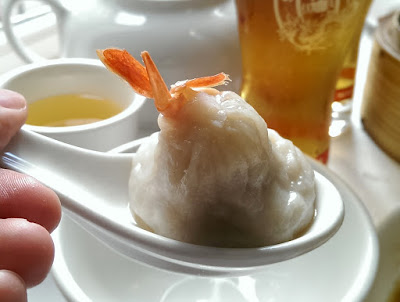 A well made dumpling should have a gossamer thin skin cradling its liquid load (cleverly, if you ever wondered how the ship gets in the bottle, the soup starts life as a cold square of jellied stock that melts as the dumpling steams). The trick being to eat them before they cool down enough so the bases stick to the steamer and split, losing your liquid cargo, but not too hot that you lift the roof of your mouth off.

These were pretty perfect, with a juicy prawny-porky filling and pleasingly thin wrappers and only one spilt load. Holding the dumplings by their emerging prawn tails and lowering them into my mouth proved an effective way of dispatching them, if not one my dining companions would endorse. 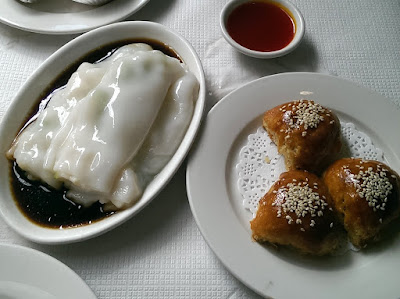 Cheung fung with scallops and preserved veg were a little gluey in texture, with an over-salty filling being overpowered by the bath of dark soy sauce they were bobbing in. Sill polished them all off, of course. Barbecued pork pastries were better; a friable lard based pastry - not one for the dieters but, literally, melt in the mouth - stuffed with a sweet shredded meat filling. Pulled pork eat your heart out. 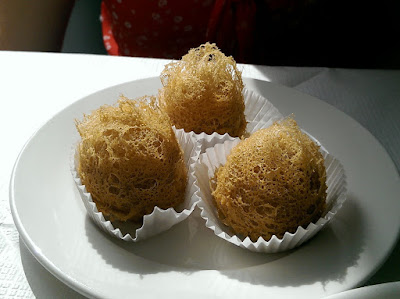 The fried taro puffs with cheese and scallop looked pretty magnificent, rather like a Halloween Don King wig. Cheese is an unusual flavour to find in Far Eastern cookery, and I was initially a little sceptical it would work, especially when paired with the seafood. Italians look away now.

Thankfully, while being all bit bonkers and and the delicate scallop being somewhat missing in action, the interior of the puffs was like an oozy fondue that wouldn't have been out of place apres ski somewhere in the Alps. An interesting novelty, although with the slightly oily crisp carapace, probably a bit overkill overall. 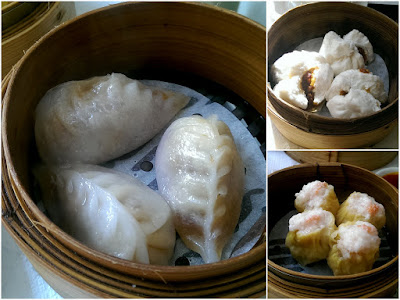 Still the Ewing's favourite, the steamed pork buns passed muster, though were rather crowded out by the other goodies on the table. Ditto the pork and prawn siu mai, although I was rather impressed by the filling, which contained whole large shrimp. They're also one of the only dim sum that come in fours, making things far easier when you dine a deux.

The steamed spicy duck dumplings suffered from wrappers that were a little too thick and chewy, but boasted an unusual filling of chilli-spiked sweet and sour shredded poultry which I was rather enamored with. 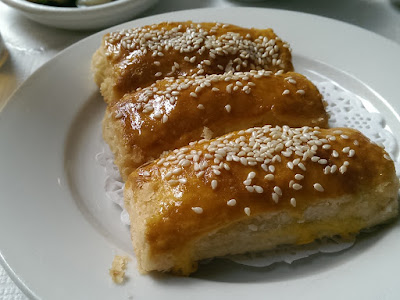 We finished with sesame topped durian pastries; the same crumbly lard dough that enacased the barbecue pork triangles, but this time filled with durian, the infamous 'king of fruits. Originating in South East Asia this spiky beast is renowned for it's smell that has been compared to blocked drains or rotten eggs. Anthony Bourdain has gone further, stating: 'your breath will smell as if you'd been French-kissing your dead grandmother'.

Mercifully these were far more tame than the pungent raw fruit, which has been banned on public transport in Singapore due to it's offensive odour. Here the filling was sweet and creamy, although it did emit a slight gym sock note, which wasn't entirely pleasant to find in your pudding. 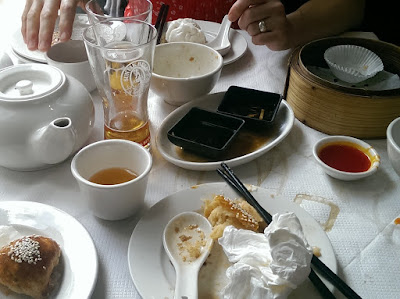 Service, notable curt in many Chinese restaurants and not renowned for being particularly pleasant here, was charm personified. Genuinely, everyone on our visit was charm personified; from the cheery greeting and giving us the best table in the window to showing me the way to the loos when I became hopelessly distracted when walking past the fish tanks, giant elephant sculptures and framed pictures of Prince Charles.

The bill also came to an entirely reasonable forty quid, which may double the Ewing's 'last tenner' theory, but was still tremendous value for a huge spread that even we we struggled to finish  - the Ewing valiantly rallied, long after I threw down my napkin, until only one lonely durian puff remained - plus icy beers and pots of refreshing green tea. 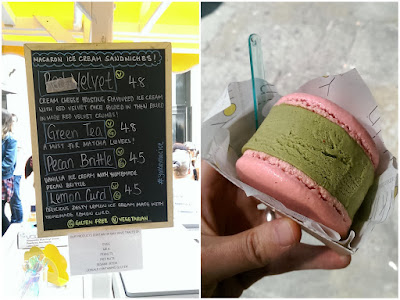 Talking of green tea, as well as a pot of it to drink with our lunch we also tracked down Yolkin, on Rupert Street's Street Food Union lunchtime market, for a wonderfully lurid homemade matcha ice cream macaron sandwich. You can find four changing flavours each week - on Friday and Saturday at Rupert Street and Sunday at the Truman Brewery.

Here they take fresh eggs, separate the yolks to make ice cream and the whites to make macaron, before combining back together again to make these awesome chewy, milky creations that sound incongruous, but when combined equal more than the sum of their parts. Like dim sum and beer, or me and the Ewing, it's always better when we're together.
Posted by Amy at 07:00