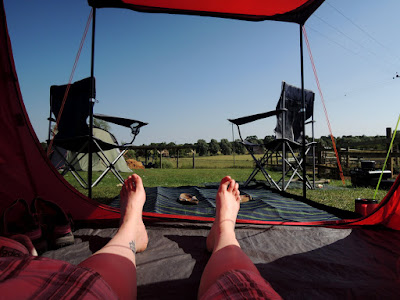 Earlier this summer (yes, it is still summer) the Ewing and I finally threw out the mouldering remains of the tent that would have been best off being abandoned on the Isle of Wight after a particularly waterlogged Bestival and got serious about spending some more civilised time under canvas.

Soon we had acquired a fancy new three man number (plenty of room for me, her and her shoe collection) and a set of poles for the porch that seemed to contain 50% more pieces than were actually needed but, unhelpfully, no instructions. Add a few cans of beer, burgers and a disposable bbq and we were ready to head up the M40 for the weekend. 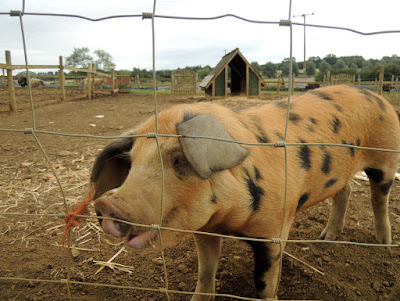 Our destination was the Pig Place, a small holding by the Oxford canal (where the owners live on their boat) featuring a farm shop; a catering van serving cooked breakfasts, lunches and cake; and a menagerie of animals including runner ducks, geese, sheep, chickens, dogs, and the eponymous pigs, including saddlebacks, oxford sandy and blacks and British lops.

The site is also off the mains, so there's no showers or running water (there is a stand pipe from their borehole for drinking water) and just one Portaloo on site. So bring the baby wipes. 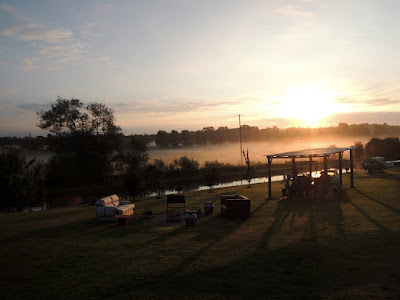 Another disadvantage of camp life are those early morning, bleary-eyed stumbles to the loo; complete with pyjama legs trailing across the wet grass. Balanced against the pains of attempting to get up off an inflatable mattress at such an ungodly hour, you may get to see a morning like this. With the rising mist in the field beyond, the swallows serenely resting on the telegraph poles and the light shining on the canal there was no where else I would have rather been. Yes, that is a sofa and chairs by the fire pit and an upright piano behind the hay bales. 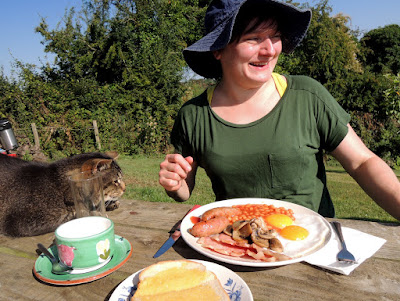 Camping or not, sunrise is far too early (or late) to be up - although I did feel inordinately smug to be awake before our resident cockerel - and so we retired back under canvas for some extra shut eye. Next thing I knew the smell of strong coffee was floating on the breeze and we had wriggled out of our sleeping bags to put in our orders for fry ups and caffeine. 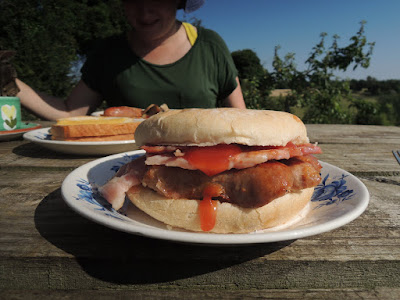 Breakfast include freshly baked pastries and rolls, things on toast and the crowning glory, the full english, freshly cooked to order using the farm's own duck eggs, sausages and bacon (which all taste amazing - TE). If you think eating pork products in the shadow of their previous porcine relations is hard, just try and do it with Sid the cat eyeing up your sausage, so to speak. But even the Ewing, certified softy, wasn't prepared to give up a morsel of her superior spread. A first class breakfast. 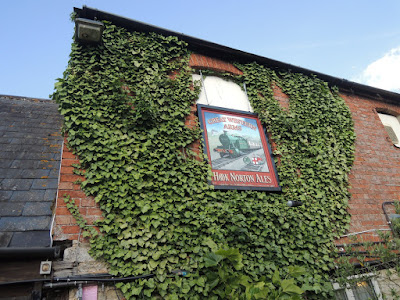 After a very hot day of pig tickling, sun bathing and losing pretty much every drop of my moisture in my body after falling asleep in the porch of the tent, it was time to rehydrate. Thankfully, the Great Western Arms is but a country mile down the very pretty canal path that runs adjacent to the campsite. 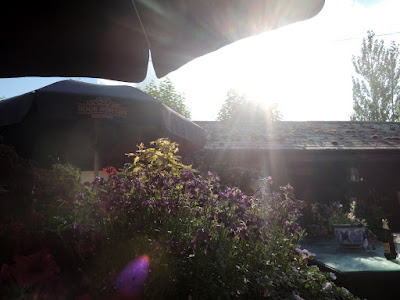 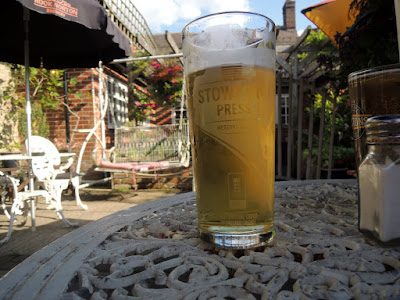 After bagging a spot in their pretty courtyard garden in time for dinner, we opened with cold pints of Stowford Press. Particularly apt as they also sponsor the England cricket team, who had wrapped up the Ashes that morning with a stonking performance at Trent Bridge, ergo helping save my phone battery so I could take more fuzzy pictures of maurading snouts in the trough (and some pictures of the pigs, too). 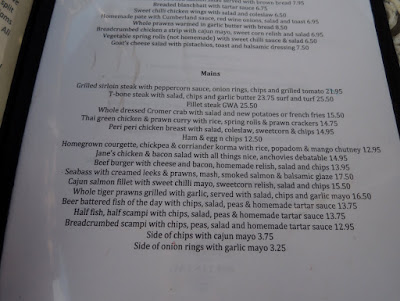 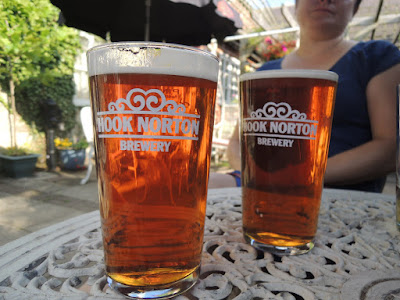 A menu full of nice things; 'anchovies debatable' (anchovies are never debatable). Being a Hook Norton pub, we also had to have a pint of the local ale, this being Hooky, Old Hooky's lighter younger brother. 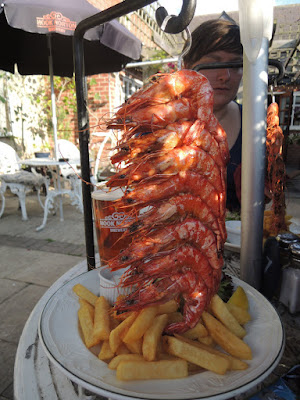 Continuing with the holiday theme I plumped, unusually, for the shell on tiger prawns. As much as I love crustaceans it's a dish I normally save for foreign climes - preferably with my feet in the sand and a glass of chilled vino blanco in hand - with my natural greed often disappointed by the sparing numbers served on these shores, often with the flavour and texture of fishy cotton wool. 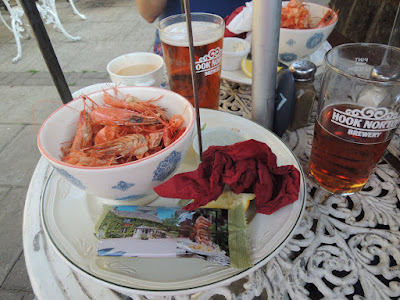 No such worries here, as a skewer stuffed with them arrived tableside, dripping their sweet, garlicky juices onto a plate of superior chips below. There was also a suitably garlicky home made mayo, with a luscious wobble (not unlike me on our walk home) and a suggestion of side salad to counteract the butter and fried potatoes.

It may be premature to say it but, influenced by sun and cider, it's already gone in as a strong contender for dish of the year. The simple sort of cooking, well executed and with bold flavours that you wish every pub could effortlessly bang out. Not bad value (if not cheap) at sixteen and a half quid, either. 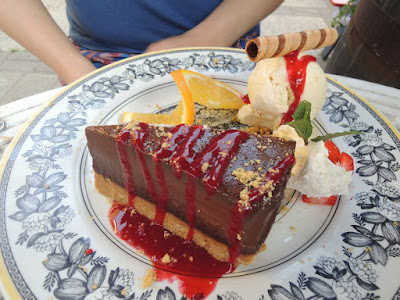 For desert the Ewing had the majestic chocolate torte, a great hunk of loveliness (although not quite up to Delia's ameretti biscuit version) that came adorned in all that extra shizzle - orange slices, sugar wafers, raspberry sauce, strawberries, whipped cream and ice cream - that has sadly been lost in the trend for simple plating. When it comes to pudding, more is definitely more. 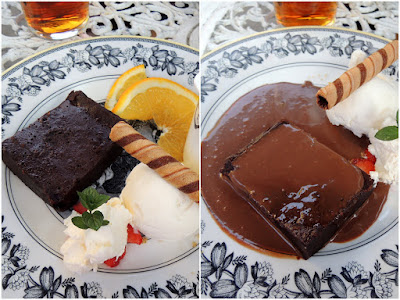 I don't get food envy very often - having usually trailed the internet days in advance to pour over menus and gaze at blurry phone pictures with too much flash on Trip Advisor - but on this occasion my mudcake (with chocolate ice cream swapped out for banana) looked, despite the adornment, decidedly ordinary.

But they say the proof of the pudding is in the eating, and that was certainly true in this case, with the cake being wonderfully sticky and claggy, lubricated by the hot fudge sauce and whipped cream. Another course that transcended my string of superlatives. 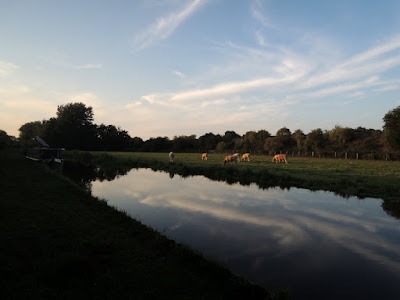 After a half of Old Rosie for the road (take a torch if your going to be walking after dark; the path is narrow and the water's deep), we stumbled merrily homeward. All the while safe in the knowledge that, with it's double garlic hit, we had both chosen the prawns for dinner; hence there could be no recrimination at our ability to repel vampires from fifty feet on getting back to the  confines of the tent. Ah, the romance of the great outdoors....
Posted by Amy at 07:00