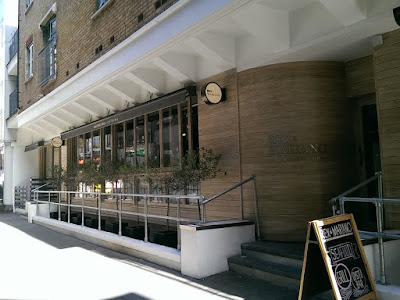 One of my happiest holiday memories on a family trip to Florida as a child wasn't meeting Mickey, or riding Space Mountain, or even being splashed by Shamu at Seaworld (these were the innocent days before Blackfish) but discovering Red Lobster for dinner. A basket of popcorn shrimp for me and a pound crab legs for my sister were guaranteed to keep us quiet while my parent's piled through pitchers of weak pilsner in the desperate attempt to get pissed.

Older but not much wiser, I still love fruit de mer (with a few exceptions, notably a cherrystone clam chowder at Grand Central seafood bar. A memory that still provokes a gag reflex) although i'm not as keen on the price tag.

Cue soho's Rex and Mariano; owned by the same group as the bonkers Beast (where £27 will buy you a solitary king crab leg) and the upmarket Goodman steak chain, you may think their latest gaff's bound to break the bank. But, like their other 'budget' option, the still peerless Burger and Lobster, this is seafood for skinflints, all served up in snazzy surroundings (the alliteration game's strong today). Part of the cost cutting comes with iPad's instead of waiters - although they still need to employ real humans to tell you how to work the iPad's, and then come over to help you when they go wrong... Overall it was a nice touch, meaning you could pace the arrival of dishes to suit you. It also keeps the service charge at just 5%. One negative of electronic ordering meant we did quickly run out of room on the table, but that was possibly as much down to our greed).

Generous amounts of decent bread were soon ordered. The crispy ciabatta, with its oily crust stuck through with shards of garlic and rosemary, being my favourite, although the nutty wholemeal went better with the tuna pate that was served alongside. The pate itself was reminiscent of the little brightly coloured tins of fish paste I used to eat on Portuguese holidays as a child, and as such I can think of no higher praise for it.

Second out out were these little yellow fin tuna stuffed olives. I first tried these in Le Marche, with a view of the Appenines and a cold glass of Campari in hand, so was fairly confident this version would be a a mere interlude before bigger and better things. Thankfully, like many things, I was wrong (OMG, finally you admit this - TE). The only downside being the narrowly avoided third degree burns to my soft palate, the little nuggets being both moreish and incendiary when fresh out the fryer; a very dangerous combo.

From their crudo section we chose a summery seabass carpaccio with olive oil, tomato and parsley; an easygoing combo of fresh flavours that was favourite of the Ewing's, if a touch wan for my jaded taste buds.

Livelier was poky tuna tartare with chilli and avocado and sesame oil, an ingredient that can be Marmite like (controversially I have no real opinion about the yeast spread itself, other than it's far inferior to Bovril), but here applied with a restraint that gave the dish a little smoky zing.

One of the most Instagrammed plates on my feed this year (still way behind a certain soy egg yolk on blood cake) is this dish of red prawns. Here you can have them fried or, as we did,  raw with nothing but a lick of olive oil, lemon and salt.  As Jay Rayner points out in his Guardian review of the gaff: 'if your companion does not start sucking at the heads, send them politely on their way. They are not greedy enough, and will prove unsatisfying company.' The Ewing would certainly pass muster. (compliment accepted! -TE) 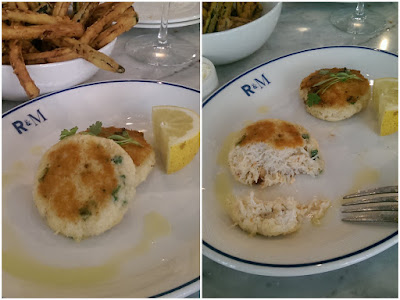 A duo of crab cakes, at two for twelve quid, were peerless. Often spud heavy and bland these were dense little pucks of hundred percent Cornish crustacean, the white meat bound with just a little mayo before frying. 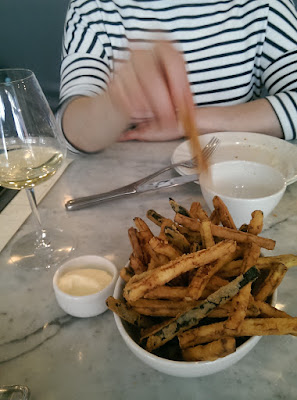 A bowl of rustling courgette fries and accompanying garlic aioli were unnecessary but addictive and were quickly dispatched alongside a glass of crisp picopul from a decent, if not nearly as good value as the grub, wine list.

While I'm not sure it can ever match the peerless joy of putting a plate of jumbo coconut shrimp with pina colada sauce in front of an excitable eight year old who's still slightly delirious from queuing up to ride roller coasters in the heat of the Floridian sun all day, Rex and Mariano still bought a big ol' smile to my face. And not too much pain to my wallet. Since Tilly Gingerbread, my little strawberry blonde niece, was born I seem to see gingerbread related things everywhere I look (oh, oh, oh, Baader Meinhof, as the 'saviour of pop' circa 1993, Luke Haines would say). It was no different as we left the restaurant and headed South towards Stealth's, a route that fortuitously took us past Paul A Young's Soho shop. After nipping in 'for a quick look', how could I resist buying a brace of the gingerbread shortbread with ginger caramel and spiked with crystallized ginger. Beautiful to look at and very sweet but with a little fiery kick, just like their namesake.
Posted by Amy at 21:34